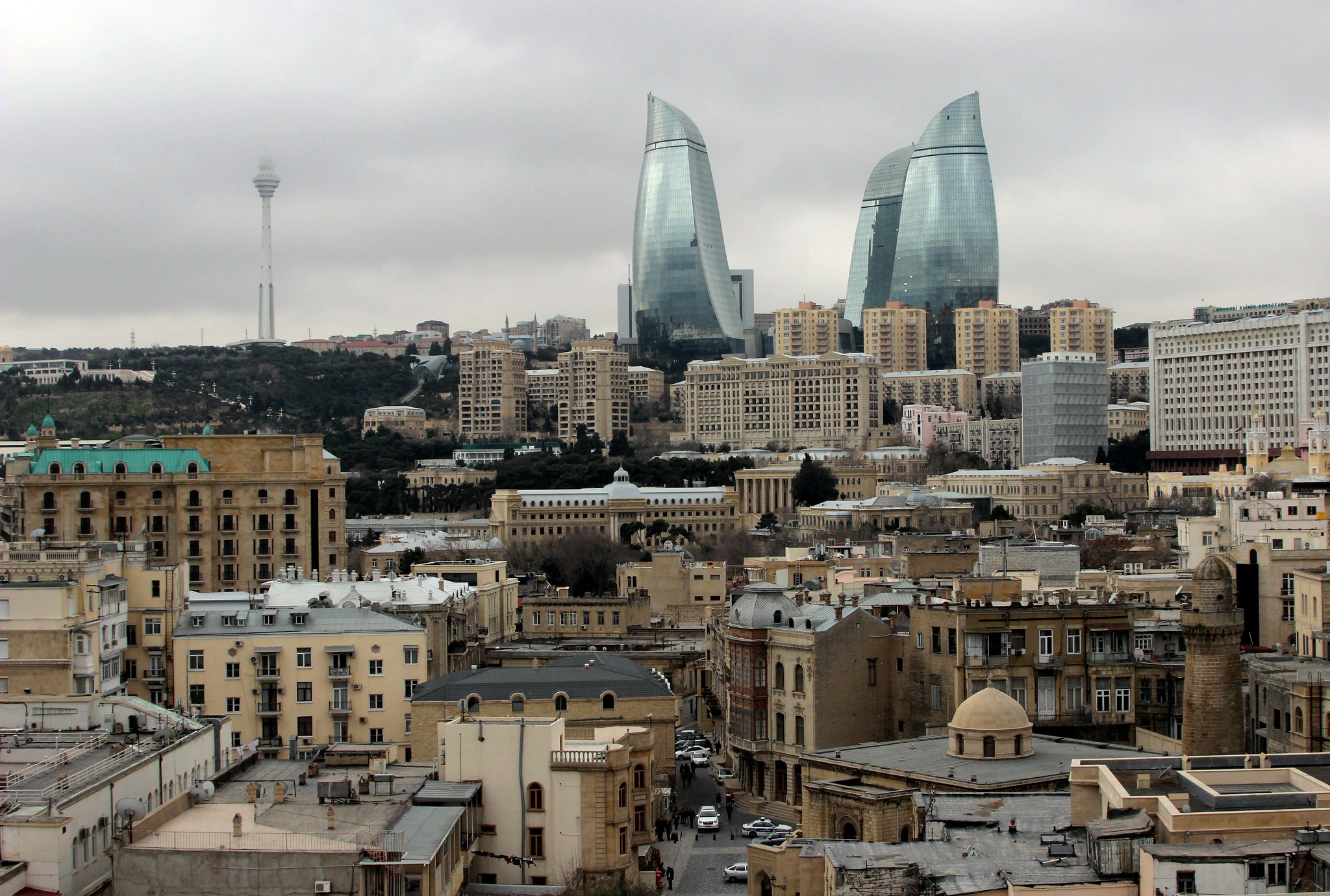 The Flame Towers of Baku, Azerbaijan. Had we moved there already this would be my photo, but since we’ve yet to set foot in the country, I’ve borrowed it. Credit to Trevor Claringbold.

In September of last year Rachael and I began preparing to move back overseas. We re-established contact with the international school job search agency which had brought us to Qatar in 2013, set up profiles for ourselves, and began looking at schools.

One of the first schools that caught my eye was in Muscat, the capital city of Oman. We’d traveled to Oman in 2014 over the Muslim holiday of Eid and I had fond memories of the family we’d met via Couchsurfing.org and spent several days with. They lived on a banana and date farm north of the city and invited us to their Eid celebrations, which included pit-roasting a goat and eating mountains of dates and tiny, delicious bananas1. This school provided housing right on campus, too, and I dreamed of walking to work under the shade of date palms.

We looked in East Asia and South America, in Central Asia and Sub-Saharan Africa. Even now, a year later, the school we looked at in Lusaka, Zambia is still on my mind. Their recruitment video showed teachers driving jeeps on safari, mountain biking, and their kids running around outside without shoes. Clear air, a rarity in many parts of the world, and suburban setting, temperate climate, and lush vegetation topped off the idyllic setting.

Unfortunately Lusaka wasn’t meant to be, and neither was Oman. Being able to hire two teachers (or in our case, a teacher and a counselor) together is a boon for schools since it saves on costs, but it meant that instead of just needing an opening for one of our jobs at a school we needed openings for both. This prevented us from moving forward with the school in Lusaka and at many others.

By mid-December we’d applied to over 40 schools in 34 countries. We’d interviewed with half a dozen of them2 but kept running up against the same issue: they didn’t think I had enough teaching experience. Most schools count their years of teaching experience after one earns their teaching certificate, and since I’d earned mine after teaching for four years in Qatar, I was still effectively applying with zero years of experience.

Two schools saw past this, though, and gave me credit for all of the years I’d spent teaching. One was in Abuja, the administrative capital of Nigeria, and the other was in Baku, Azerbaijan. By New Year’s Day we’d applied at both schools, interviewed with their principals and directors, and been offered jobs. Now all we had to do was choose.

The school in Abuja felt like a good fit. We got on well with the people we interviewed with and like the school in Oman, housing on campus would allow us to walk to work. But there were a couple of significant downsides: one was that for several months out of the year the Harmattan winds blow dry, dusty air off the Sahara and through West Africa. I’d had my fill of dust after four years in Qatar and wasn’t looking forward to returning to it. The other downside was that the school is located in central Nigeria. This is quite a distance from where Boko Haram is active in northeastern Nigeria, but the security situation is still tenuous enough that you’re not supposed to venture outside of the city. We’d be even more confined than we were in Doha, forced to take a plane whenever we wanted to leave the city.

Those were significant downsides, but no school is perfect, and we probably would’ve accepted their offers had we not received offers from the school in Azerbaijan just a few hours later.

Azerbaijan is about the size of Maine, and if you’re like me, you wouldn’t have been able to place it on a map. It shares a border with Russia to the North, Iran to the south, and Georgia and Armenia to the west. Its eastern edge lies along the Caspian Sea, well-known in some circles for its caviar, and in others for its oil and natural gas.

After interviewing with the principal and the director, Rachael and I were offered positions at The International School of Azerbaijan. I would be teaching math and computer science, and she’d be their new middle school counselor. We were elated. From everything we’d been able to turn up about the school, including from a high school friend of Rachael’s who’d worked there for years, it appeared to be an excellent school.

It was no surprise that they were interested in hiring Rachael. She’d worked as a counselor in one capacity or another for the past 12 years, experience that ranged from specialized interventions like PCIT to exactly what they were hiring her to do: run a middle school counseling program.

I was confident that I was good enough for this school, too, but I have to admit that I was surprised that they agreed. After all, I’d only recently earned my teaching certificate, and I didn’t follow the traditional path of majoring in math in college and then jumping right into graduate school and teaching.3

We slept on the offers for a day just as a matter of principle, and then wrote back to accept.

What we didn’t know at the time was that even back in January, there was a deadly virus spreading in China’s Wuhan Province that would throw a giant wrench in our plans. More soon on how that has played out in Azerbaijan, and what it’s meant for our lives and work.

This post is part of a mini-series on our long, drawn out transition to working in Azerbaijan. You can see the second post in the series here.