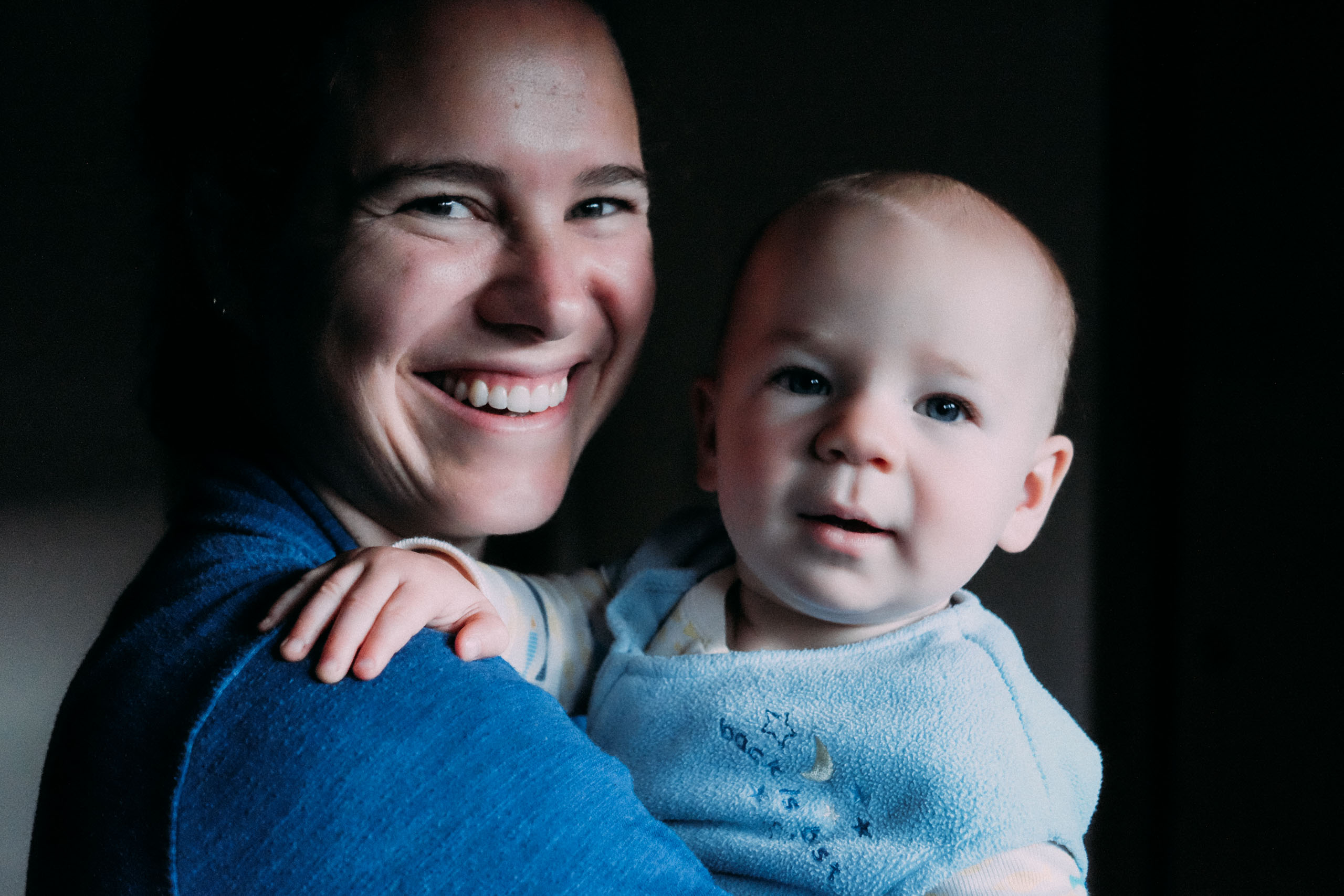 I’ve told the story of Oren’s birth before and I will tell it for the rest of my life. How could I make sense of it otherwise? The hope that unlike with Idara things would go as we’d planned, and then the realization that they would not, like a rubber band pulled back slowly, tension and risk increasing all the while.

I remember feeling calm as Rachael and I drove to the hospital, and then almost bored as we waited for the Pitocin to jump start her labor. By early afternoon the doctor had broken her water and her contractions were causing her a lot of pain. I can’t remember precisely when she began pushing, but I do remember that she pushed for hours. A minute or two of rest and then pain so acute that she was crying out and then breathless, over, and over, and over, like some biblical punishment.

Back then, I wrote: “We treat childbirth as a performance and a battle. Our wives and mothers are our warriors, and we judge them based on how they face it.” At the expense of falling into the same trap I was criticizing then, I must say that on that day, Rachael taught me what it meant to fight, to struggle, and to endure. And once it became clear that Oren was stuck in the birth canal and that this would not be the delivery we’d been hoping for, she taught me to accept. The doctor who’d been coaching Rachael through labor was replaced by a surgeon, and a few minutes later they wheeled her out of the delivery room and into surgery.

Oren was delivered thirty minutes later to the sound of a Dodge Ram commercial playing on the radio. The nurses dried off his skin and sucked the fluid from his lungs that in another universe would’ve been squeezed out by Rachael’s body. Then they placed him in my arms. I will never forget how his eyes, at first pinched shut underneath the blinding white of the room, opened to a dark blue of unfathomable depth. In a moment he transformed from an object to a subject, complete with his own perspective through which to see the world. 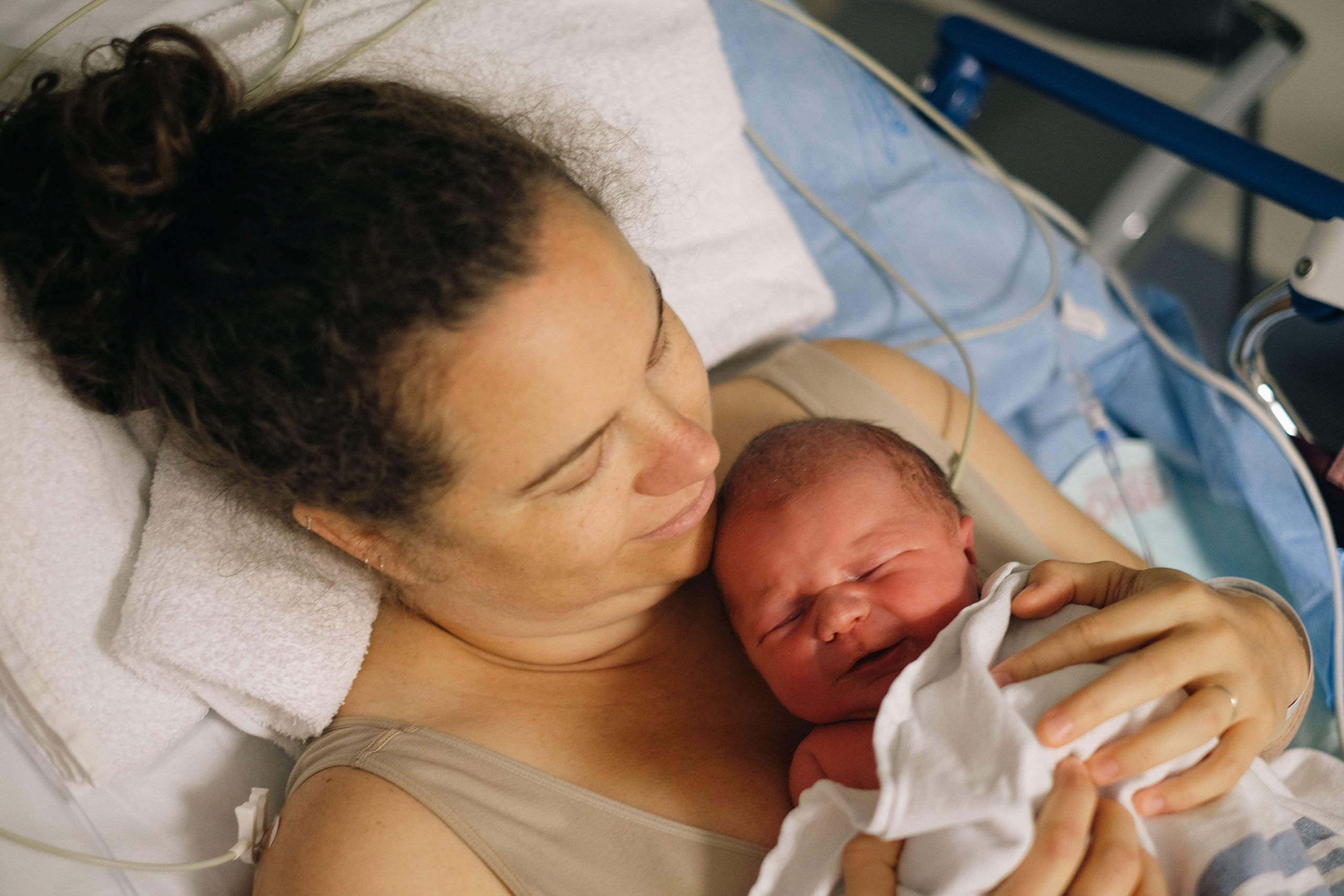 The first time Rachael held Oren. Just a few hours earlier that giant was inside of her.

My focus, though, was not on Oren, who was resting quietly in my arms. Rachael’s operation continued for nearly two hours after he was delivered, and even even after the surgery was complete she looked pale and weak. She received two blood transfusions and slowly, over the course of the next day, her strength began to return.

Seeing what Rachael went through to bring Oren into the world, (and the doctors and nurses besides) convinces me how silly it is that we are the focus of our own birthdays. The people we should really be celebrating are the mothers. What if instead of throwing parties for Oren we threw parties for Rachael? We could invite the doctors and the nurses who were a part of it and sit around and raise toasts to never going through that particular night ever again. 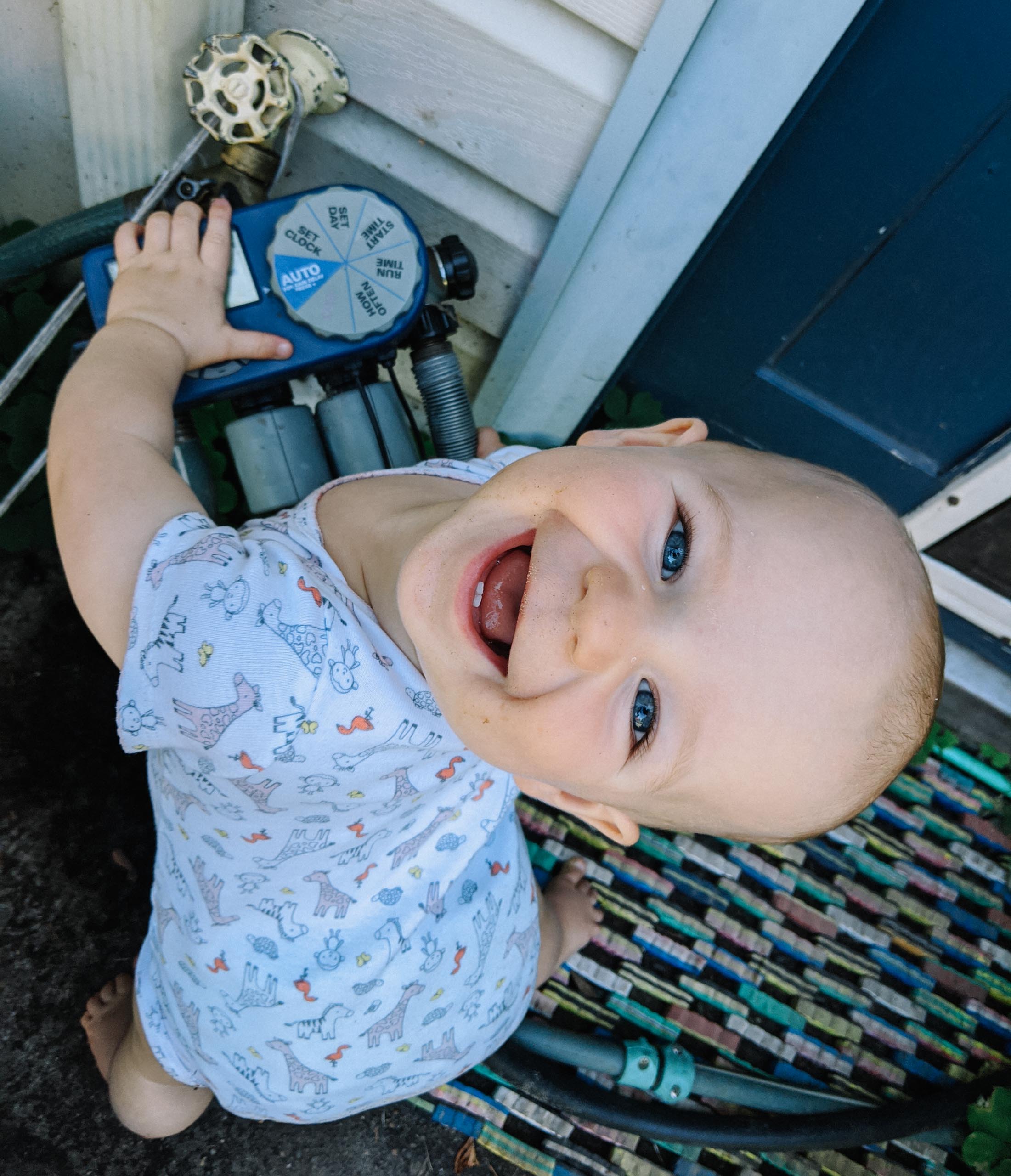 Have you ever seen anyone happier to be adjusting the sprinkler?

What I didn’t know on the night of September 19, 2019 was that one year later Oren would be this twenty-pound, bald, smiling and crying baby. That he would have six teeth, with more on one side of his mouth than the other. That his hair would only really grow at the back of his head, giving him a wispy blond mullet. I didn’t know that he’d crawl so fast that I’d have to speed walk to keep up, or that he’d be standing up and looking around to see if anyone was witnessing his defiance of gravity. In short, I didn’t know that he would be Oren.

In some sense I still don’t who he is or who he’ll be. We think of getting to know someone as this static, one-dimensional thing, but it’s so much more than that. Oren is changing every day, as am I. It’s like trying to read a book that hasn’t been finished yet, filled with words that rearrange themselves as soon as you try to look back at what you’ve just read. Frustrating, perhaps, but also exciting, like what it might have been like to watch God create the heavens and the earth. 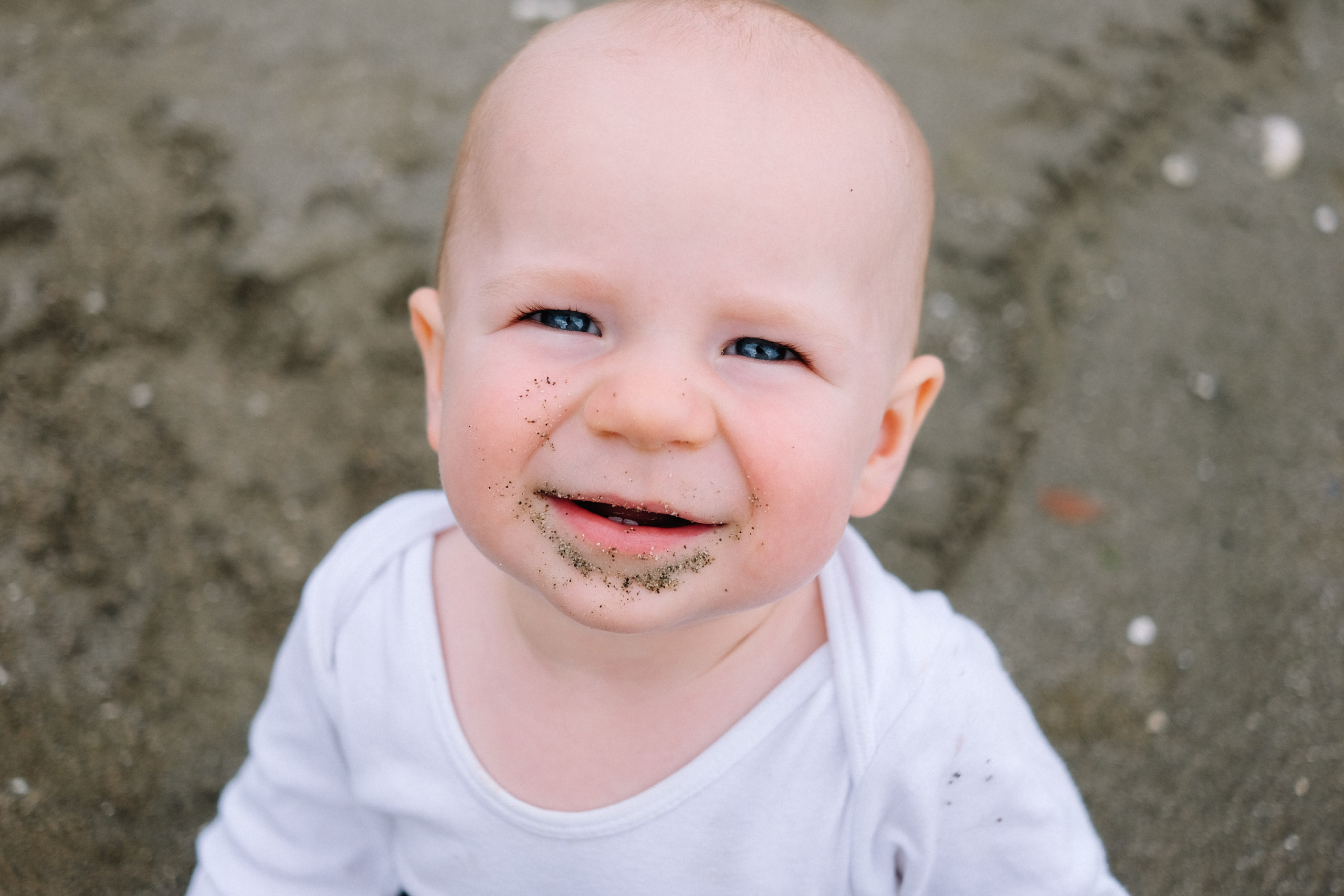 Rachael liked to eat sand when she was a baby, a trait that Oren appears to have inherited. This is him on a beach in Puget Sound after his afternoon snack.

As soon as Oren was born people began telling us how contented he was, but I’m not sure I agree. Oren seems normal; sometimes he’s happy and sometimes he’s sad. In the past few months he’s found more things to be unhappy about. Perhaps the worst thing we subject him to is trying to keep him on his back, whether for a diaper change or anything else. It’s as if as soon as he discovered that he could flip himself onto his stomach he vowed to never spend another moment on his back. Sometimes we can distract him with a new toy but more often than not he struggles against us, screaming as if we’re sawing off a limb. When he escapes, which happens a lot, the crying and tears immediately cease and he crawls off, perfectly contented.

Another thing he hates his sitting in his high chair. He’ll eat a few bites and then completely lose interest in his food. Since hunger is the root of most of our discontent these days, leaving Oren anything less than completely stuffed is unacceptable. After a few weeks of dealing with this challenge Rachael realized that if she put him on her lap then he’d keep eating and eating and eating. And when he eats more he sleeps more, so naturally we’ve adopted this strategy at every meal. We’ll even follow him around the house slipping little bits of food in has mouth as he crawls around. Go ahead and judge us, but don’t forget to ask yourself what lengths you’d go to for an extra hour of sleep. 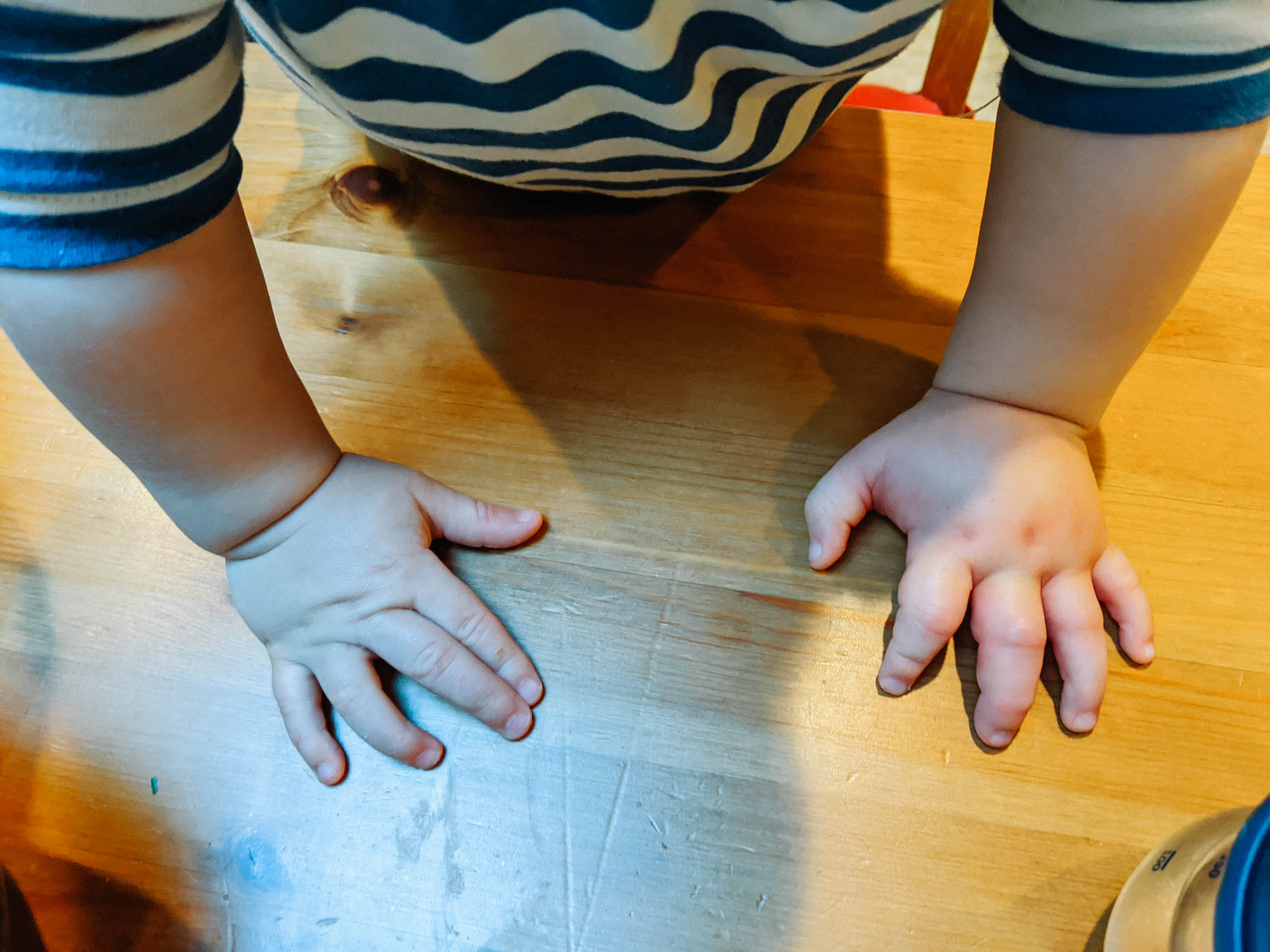 One of these hands is not like the other, and is also a product of Oren’s habit of grabbing honey bees in the back yard.

Perhaps the worst crime we visit upon Oren is going outside without him. Whenever he sees someone put on their shoes he heads toward the door like a dog who sees her owner grab the leash. But it’s not just the shoes. Grab the car keys or put on a jacket, and Oren sees you. He’d love to join you, if possible. If not, he’ll just look at you through the window and sob.

I’ll finish with one of my favorite things about Oren at this stage, best summed up in a photograph: 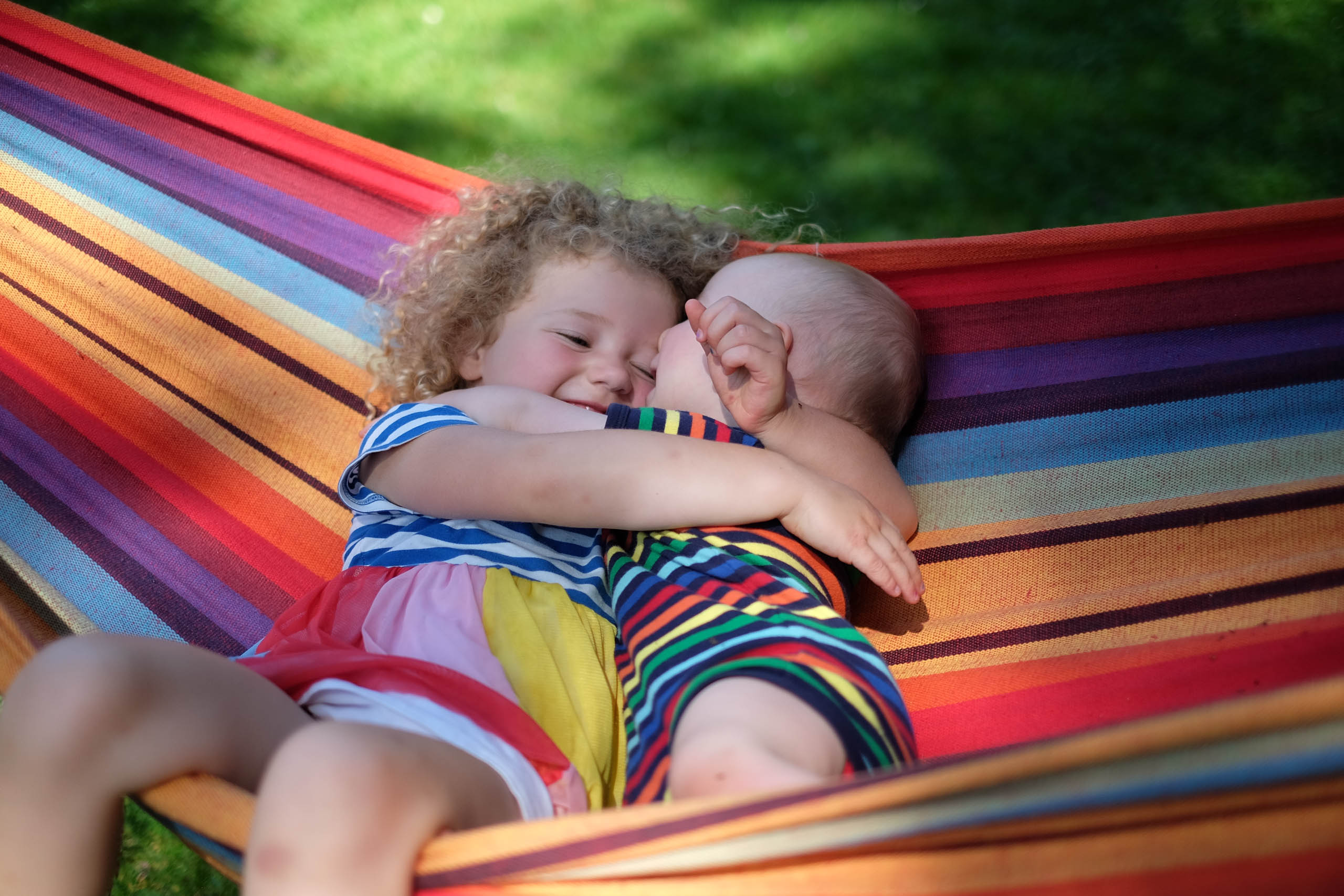 Oren sobs when you go outside without him, and when he’s on his back, and when he has to sit in high high chair, and in a hundred other situations, but when he’s happy he’s as full of love as a one-year-old can possibly be. He hugs and kisses and licks and waves. And when I see him for the first time each morning after a night apart his smile is as bright as the room where we first had the pleasure of meeting him.