Drawing the Soul Toward Truth: The Math of Ancient Greece

In my previous posts on the history of math, one theme that came up repeatedly was that the same mathematical ideas arose again and again in different periods and in different cultures. Classic examples of this include the decimal system of numeration, the concept of zero, the basic operations, and even more advanced ideas such as the Pythagorean theorem.

In many cases, it’s impossible to determine which culture was the first to come up with an idea, due to a lack of physical evidence, imperfect dating techniques, and other challenges. This is the case for many ideas, but not for that of the axiomatic proof, an idea which came out of Ancient Greece and forever changed mathematics and the modern world. But before we get to proofs, let’s take a step back. And unless otherwise noted, my summary and commentary here is based on A History of Mathematics by Victor Katz.

Ancient Greece and the historical record

The period we’re concerned with here dates from approximately the sixth century BCE. At this time, Greece lacked a central government and was instead made up of a collection of city states. These city states existed under the rule of law that was premised on argument and debate, two critical ingredients when trying to prove anything, mathematical or otherwise.

What we know of the mathematics of this period is only thanks to copies of copies of the original Greek texts. In fact, according to Katz, “there are virtually no extant texts of Greek mathematics that were actually written in the first millennium BCE.”

For numbers, the Greeks used a decimal system which used Greek letters to represent numbers. This was not a positional system. Indeed, there were different symbols altogether for 1, 10, and 100, and numbers in the thousands and greater were made by using a superscript notation, such that ‘θ would represent 9,000, the θ for 9 and the ‘ for thousands.

To represent fractional parts, the Greeks employed a system similar to that of the Ancient Egyptians, in which there existed symbols for the unit fractions, like a half, quarter, and so on, plus a symbol for two-thirds. These symbols would then be combined into a sum of fractions to represent the fractional part. For example, three-fourths might have been represented as the sum of one half and one quarter.

This similarity with the Ancient Egyptian system is consistent with the fact that there was significant sharing between the two cultures (though they were active in different periods). Indeed, the Greeks themselves said that their discoveries were made possible by discoveries made by the Egyptians.

Pythagoras, the Pythagoreans, and a theorem

Pythagoras was born in the 6th century BCE in Somos, now modern Greece, and died in what is now Italy about 75 years later. In the interim, he founded a school which focused on a kind of mathematical mysticism.

One important conviction of the Pythagoreans was that “number was the substance of all things.” This speaks volumes about the possibility of using numbers to know and understand the universe, a thread that can be seen throughout Ancient Greek philosophy.

Perhaps the most well-known idea to come out of Ancient Greece (ignoring for now that other cultures were aware of it, too) is the Pythagorean theorem, which states that the sum of the squares of the legs of a right triangle are equal to the square of the hypotenuse (a²+b²=c²).

Much has been written about Pythagoras, but one thing we don’t know for sure is whether he invented it. We do know, however that other cultures were aware of the relationship and likely discovered it in independence. Nevertheless, Pythagoras is credited with the first proof, though no extant version exists.

There are now hundreds of ways of proving the Pythagorean theorem. One of the most common is by rearrangement, shown below. We’ll see Euclid’s proof, which is the focus of the first book of his Elements, shortly.

A visual proof of the Pythagorean theorem employing reorganization. Refresh this page to see it repeat, or click here to see it on Wikipedia.

The repercussions of this relationship are nearly limitless. In particular, one outgrowth is that the sides and diagonal of a square are incommensurable, which means that they cannot be expressed as a ratio of integers. For example, take the unit square, whose base and height is 1. Draw a diagonal line connecting two opposite squares of the triangle to create two equal triangles. The hypotenuse of those triangles, according to the Pythagorean theorem, has length √2 (1²+1²=c² → c = √2). This number cannot be expressed as a ratio of integers. In other words, it is irrational, just like π.

This recognition of a number as being irrational was, according to Katz, unique to the Greeks. The Babylonians assigned a length to this hypotenuse (which of course one can), but they didn’t appear to recognize that it was impossible to assign an exact length.

Like Pythagoras, Plato founded a school in Athens around 385 BCE. It was said (though no proof exists) that the entrance to his academy was inscribed with the phrase “Let no one ignorant of geometry enter here.” Plato is now best known for his political and moral philosophy, but it’s important to note that mathematics were included in the education he thought necessary for so-called philosopher kings. The subjects, as described in The Republic, were as follows:

More proof of Plato’s feelings toward mathematics, or at least geometry, can be found in this line, also from The Republic:

Then, my noble friend, geometry will draw the soul towards truth, and create the spirit of philosophy, and raise up that which is now unhappily allowed to fall down.

The inclusion of harmonics is important because it illustrates an important point about abstraction. Katz writes: “…Plato meant for them to go beyond the actual musical study, using real strings and real sounds, to the abstract level of ‘inquiring which numbers are inherently consonant and which are not, and for what reasons.’”

That Plato (and others) would focus on abstraction is a key reason for why so much of our mathematical tradition is traced to the Greeks. After all, what is mathematics but an abstraction of the physical world?

The circumstances of Euclid’s birth and death remain unknown, but we do know that he was active in Alexandria after its founding by Alexander the Great, around the late 4th century BCE. His book, Elements, is described by Katz as “the most important mathematical text of Greek times and probably of all time.” In it, Euclid builds a theory of mathematics and geometry from a set of simple axioms, like a straight line connecting two points, and all right angles being congruent. Interestingly, this seminal book of mathematics is almost completely lacking numbers. It’s also lacking in measurement of length and angle, besides that of the right angle. 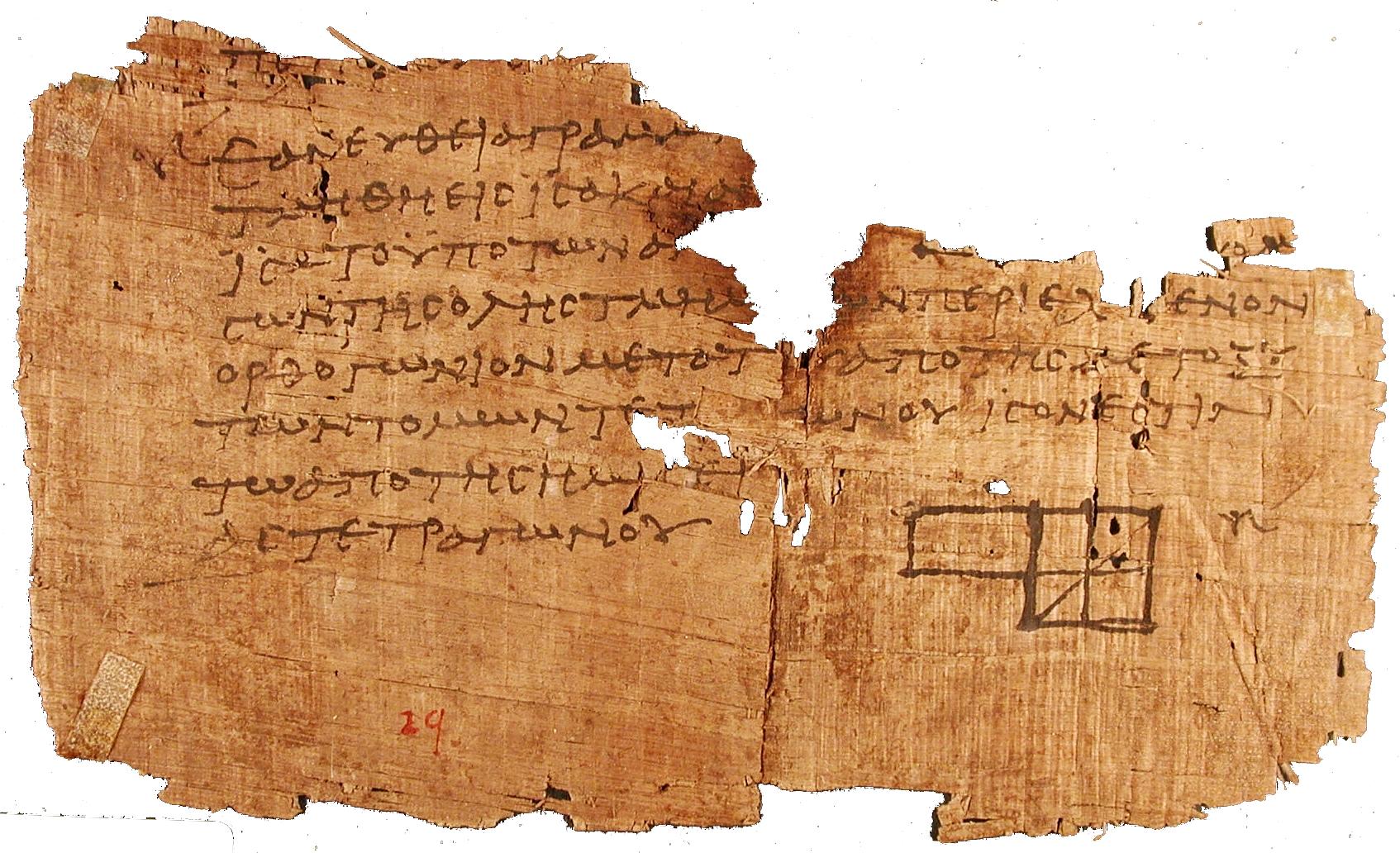 One of the oldest copies of Euclid’s Elements, dating to around 100 CE.

Historically, it’s important to point out that the contents of Euclid’s Elements was not created solely by Euclid himself. Instead, his book represents a kind of summary of what was known about mathematics and geometry at that point in time.

Ptolemy is said to have asked Euclid whether there was a shorter way to understanding geometry than through his Elements, to which Euclid replied: “There is no royal road to geometry.” There may be no royal road, but there are certainly more interesting ones. Had Euclid’s Elements been my first textbook I’m sure I would’ve given up a long time ago. It is, according to Katz, “incredibly dull.”

That said, there is a certain satisfaction that comes with walking through one of his proofs. Take, for example, his proof of the Pythagorean theorem. Rather than relying on the rearrangement proof shown above, Euclid starts with a right triangle and builds from there. If you’d like to read the proof in detail, the Wikipedia page has a summary. Alternatively, have a look at the graphic below:

The basis of Euclid’s proof of the Pythagorean theorem.

Finally, I wish I could claim the pun which headlines this section, but I stole it from Alex Bellos.