Idara at Two and Three Quarters

We were at the park today and there was another kid playing on a teeter-totter. Idara wanted to play too, so she looked over at the kid and asked, “Can I play with you?” Except she was still thirty feet away, so he didn’t hear a word she said.

“Closer!” I said to Idara, and so she walked closer, this time within earshot, and tried again. I don’t know whether the kid said yes or no but Idara got on anyway and they rocked back and forth. A few moments later she asked, “What’s your name?” 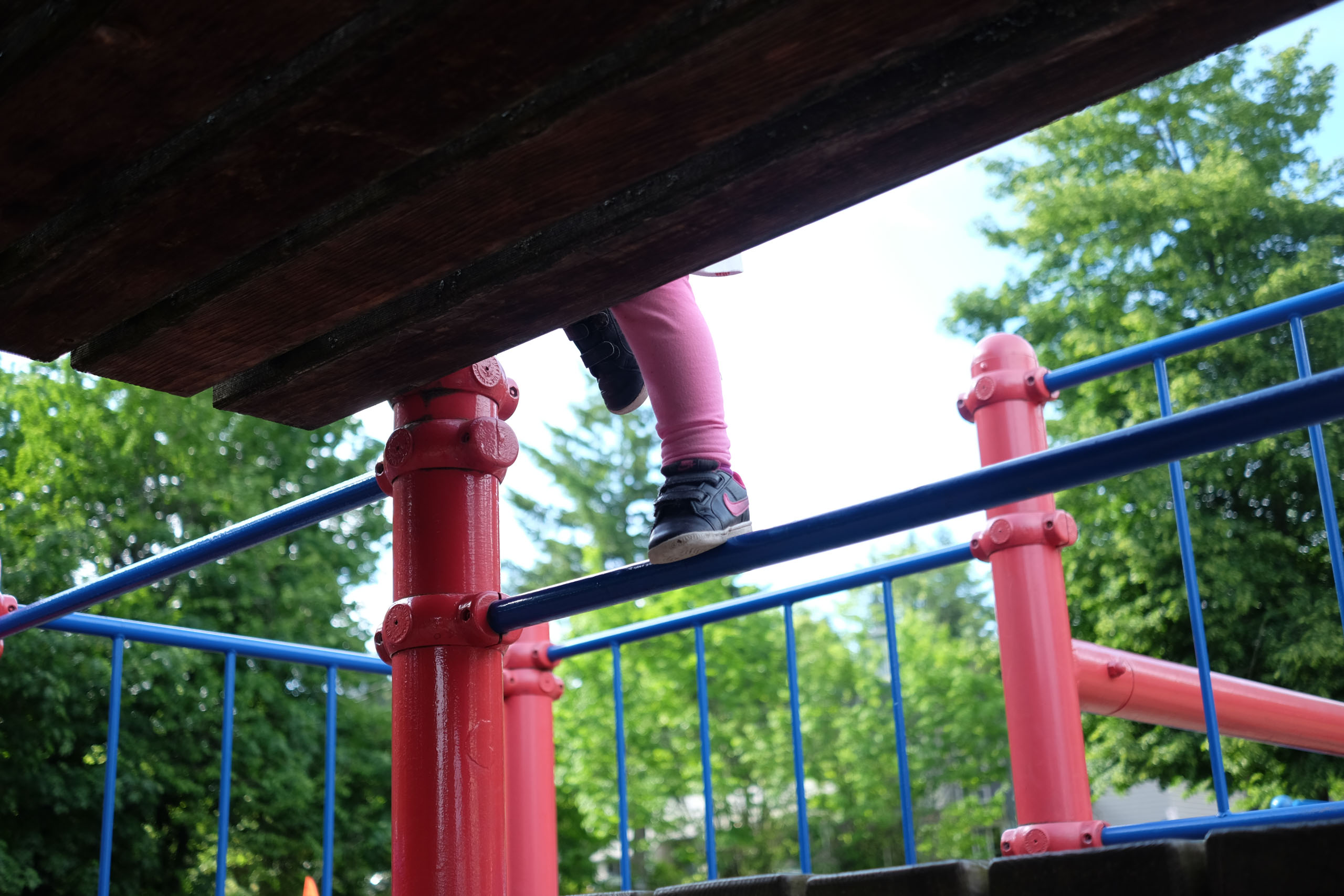 It used to be that Idara would be thirty feet away from another kid and instead of going up and asking to play she’d just stand at a distance and stare. I don’t mean to make it sound like she’s gotten rusty – in fact she’s still really good at staring - but after a few suggestions from Rachael and me she’s trying hard to make friends. She even asks directly, “Will you be my friend?” The only problem is that she’s not very discerning about who might actually want to be her friend. She asks old people and babies and dogs. Not that they can’t be her friend but it might not be a particularly fulfilling relationship.

I get a huge kick out of these sorts of interactions, but I also appreciate them on a much deeper level. They get at the realization I came to when Idara was about one and a half: that I have just as much to learn from her as she has to learn from me. Maybe more.

Like Idara, I sometimes don’t know how to approach someone I don’t know, or how to forge a friendship out of thin air. Thankfully, Idara already has the answer: Just ask.

Last spring I got a plot at a nearby community garden. My original plan was to use it as a means of introducing Idara to the outdoors. But that first year involved a lot of hard, menial tasks like working the soil and pulling weeds, and I wasn’t very successful at keeping Idara engaged. 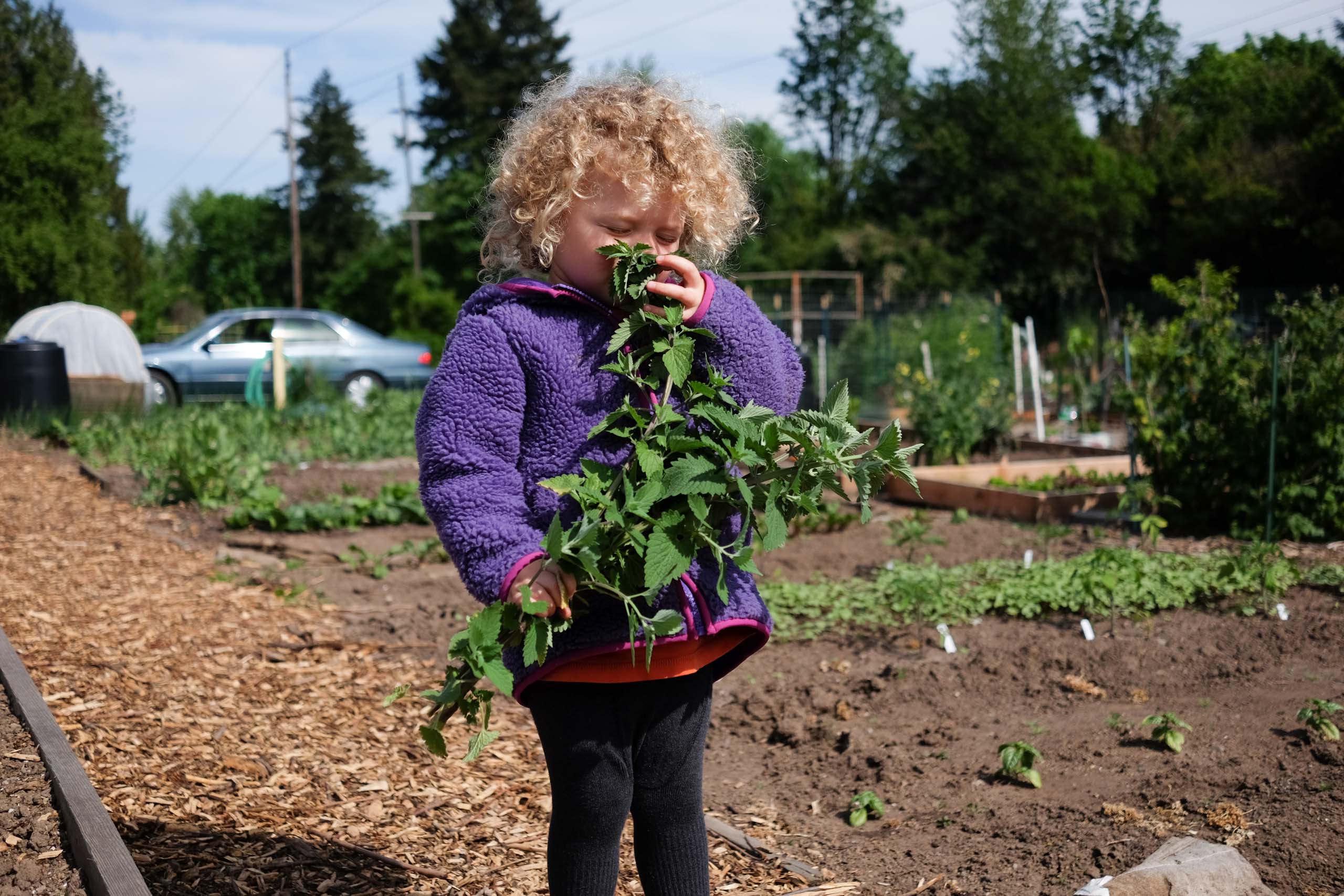 Checking to see if the catnip is ready for harvest.

This year things have gone a lot better. I try to limit our visits to about twenty or thirty minutes, and focus on the tasks that she’s good at, like watering, harvesting, and looking for worms. She can name almost all the plants in the garden and knows what’s edible, for the most part. She knows that catnip is for cats, that the strawberries need to be red, and that the biggest peas get eaten first. On the other hand, she’s convinced that onion tops are good eating, which leaves her with terrible breath and my onions with a haircut. 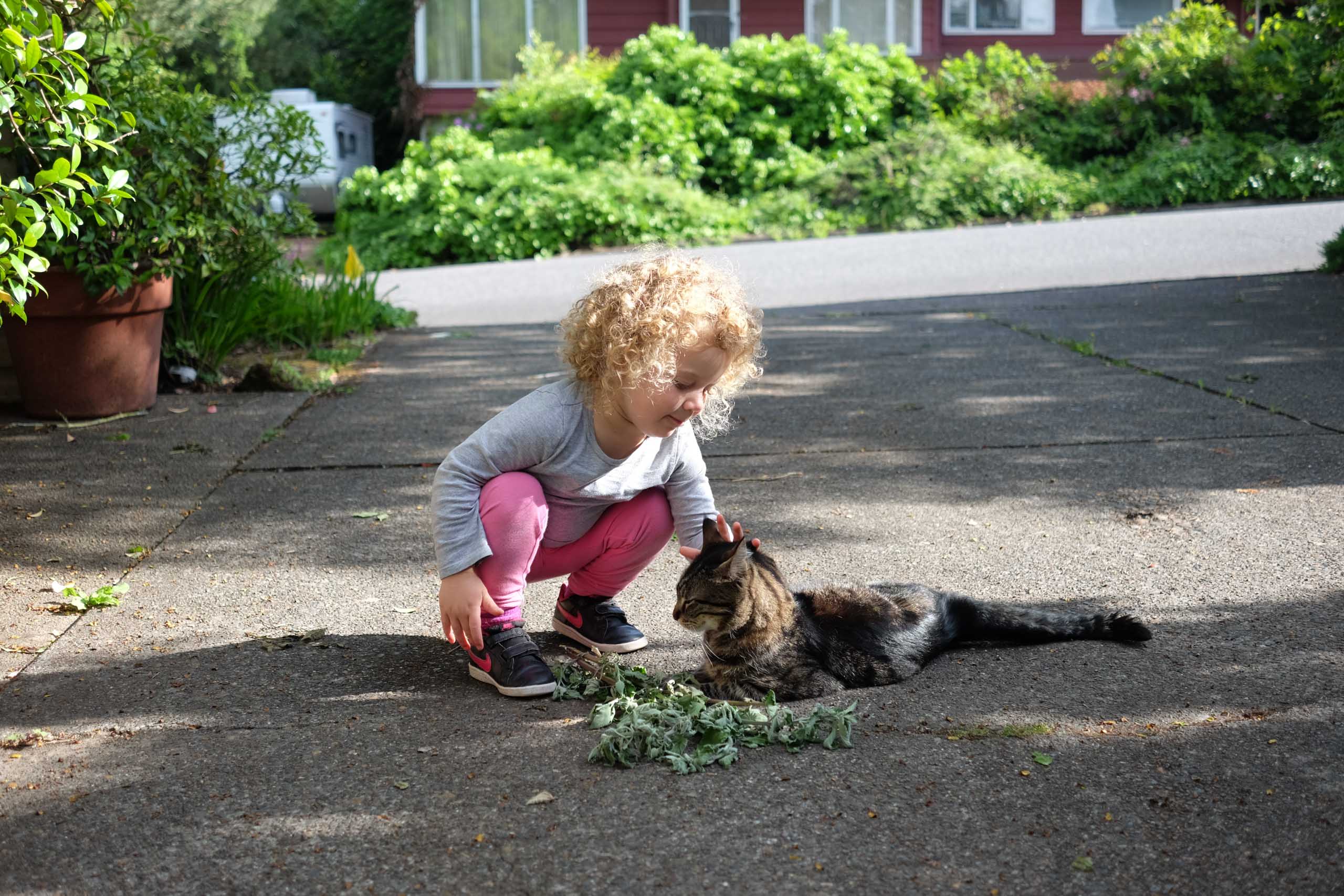 Sharing the bounty with the neighborhood cat.

Back in April Rachael got it into her mind that it was time to move Idara out of her crib. Rather than buy a whole new bed, we opted to take off one side and install a bumper so that she wouldn’t fall off in the middle of the night. We had a talk before Rachael put her to bed about staying in bed when it was time to sleep. She could climb out of her old crib, we reasoned, so this wasn’t really that different. 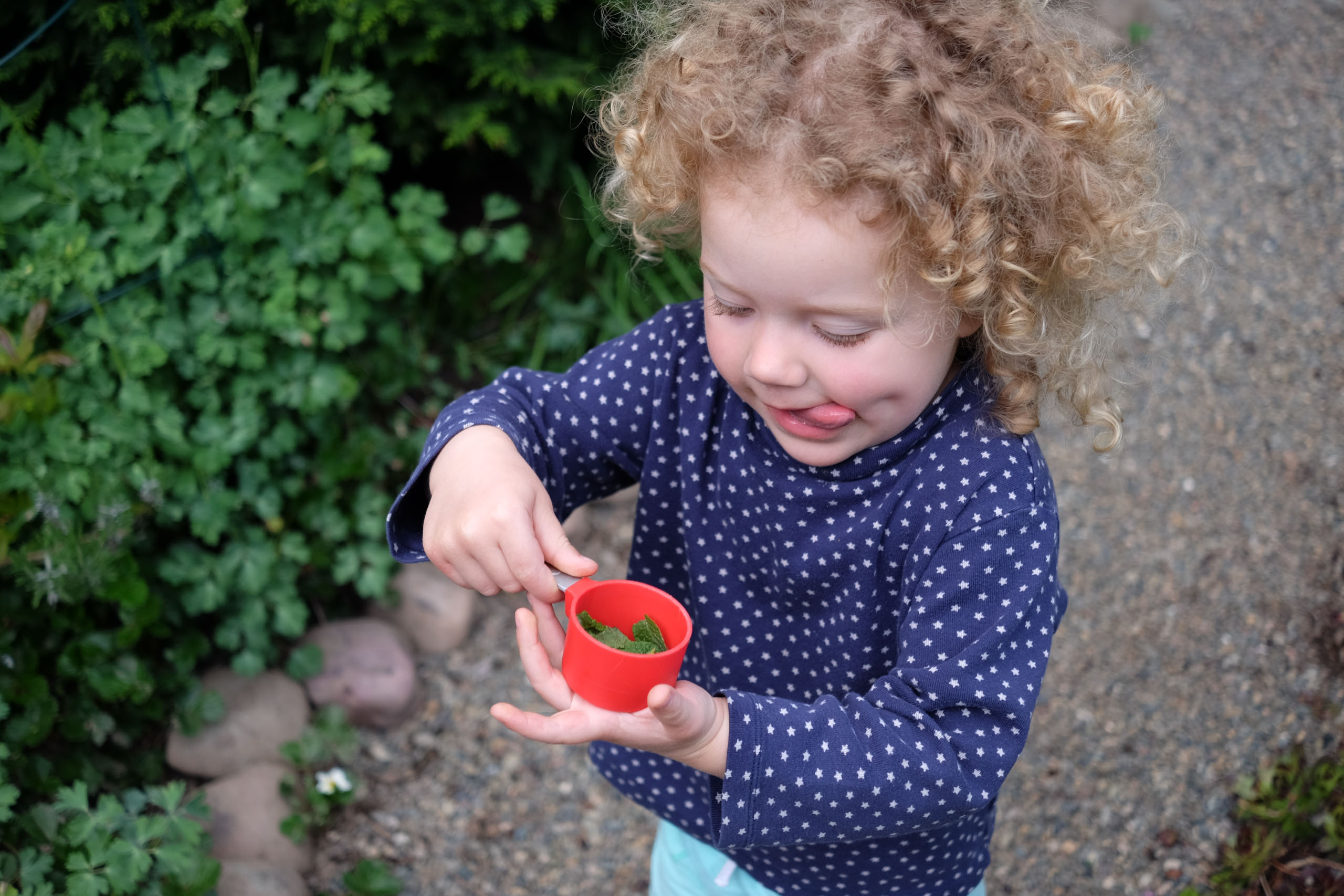 Need some mint from the garden? Idara’s on it. Just give her a container and tell her to fill it up. If parenting is just teaching a child tricks so that you can impress your friends, then this is my masterpiece.

Bedtime went easily enough. I went back in once to coax her to lie back down, and then…crickets. We didn’t hear any more noise coming from her room so we assumed that she was asleep. A couple hours later it was time for Rachael and I to go to bed and I couldn’t wait to go into our room and find Idara asleep in her new, converted bed.

When we went into our room, though, I didn’t find what I was hoping for. Instead of finding Idara in her bed, she’d somehow gotten out of her crib, made it halfway across the room, and fallen asleep on the floor. It may not have been a new bed victory, per se, but it was adorable all the same. Rachael put her back in bed and we didn’t hear from her again until the morning.

I lock you out!

Idara’s favorite game is called “I lock you out!”, emphasis on the exclamation point. Here’s how it’s played: As soon as you walk past the open baby gate to go upstairs, Idara will run after you and shout, “I lock you out!” She’ll slam the gate behind and then say again, quieter this time, “I lock you out.” Never mind that she’s the only one in the house who can’t open the baby gate, so in fact she’s the one who’s locked out. It’s still a blast, partly because the possibilities are endless. She can lock you out of the sliding glass door, or the front door, even the car!

Last week Rachael was running errands with Idara. I was studying at home when Suellen came upstairs and said, “Rachael’s been trying to call you. She’s locked out of the car and needs you to bring the spare key.” I was already headed out the door when Rachael called again. “Idara’s in the car,” she said. Black car, sunny day, child locked inside. I wonder who’d arrive first: me or Child Protective Services. 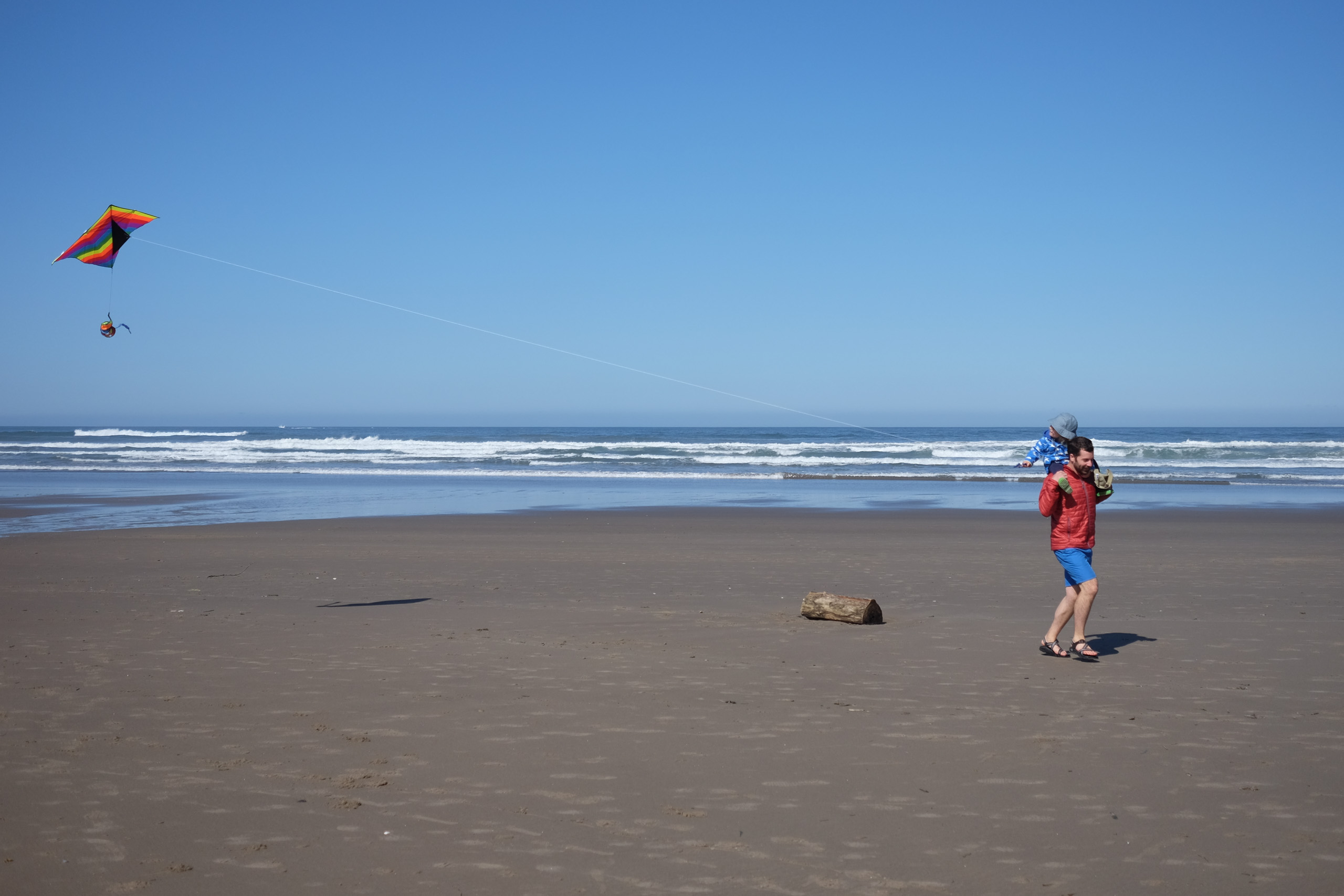 Idara received a kite for Rachael’s birthday (you read that right), and so when we were at the coast we tried it out. Unfortunately there wasn’t much wind that day so I had to make it.

When I arrived, Rachael was standing next to the back door. Idara was on the other side, buckled into her car seat. That explained why Idara couldn’t unlock the door for Rachael. But how had she locked her out? “I locked myself out,” Rachael said. “Buckled her into the car seat, tossed my bag into the car, and then closed the door before I realized my keys were already inside.” Oops.

Back in January, we found out that Rachael was (and is!) pregnant. Talk about burying the lede, right? Anyway, it wasn’t long before Idara was wondering why Rachael was sick (nauseous) all the time, and so we told Idara that in a few months she’d have a baby brother or sister. Needless to say, the whole concept flew right over Idara’s head. Maybe it’ll sink in she realizes what an injustice it is to be woken up in the middle of the night by a crying baby. 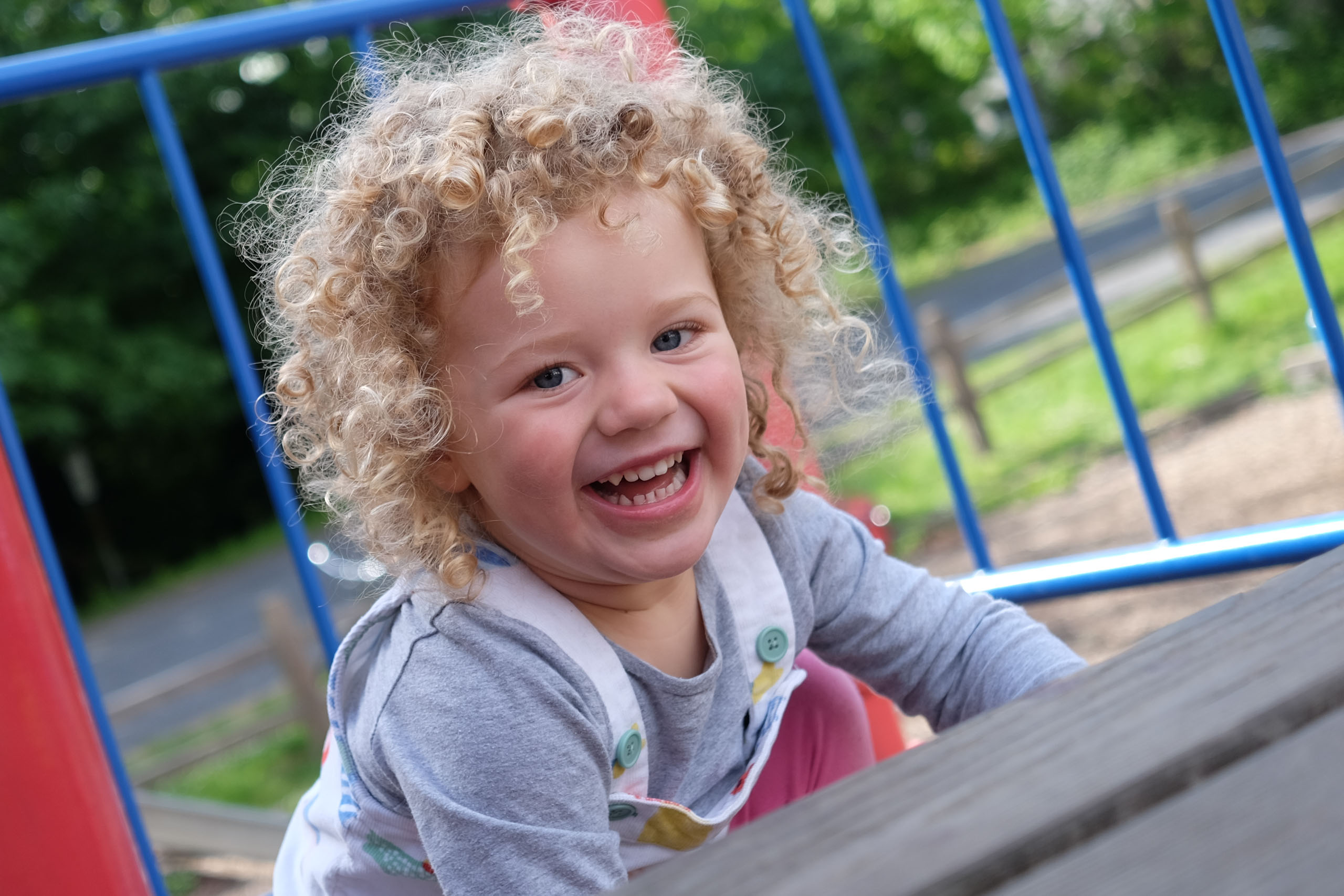 Big sister to be.

A few weeks after we told Idara, I asked her what she thought we ought to name the new baby (“New Baby” is already the name of one of her dolls, so that was off limits). Without even pausing to think about it, she blurted out, “Jeff!” But Idara doesn’t know anyone named Jeff. We’re still scratching our heads.

Not too long after, Idara decided that Jeff was a mistake, and that the baby’s name would need to be changed to Marshmallow. So, get ready for a birth announcement, sometime in September, for baby Marshmallow.