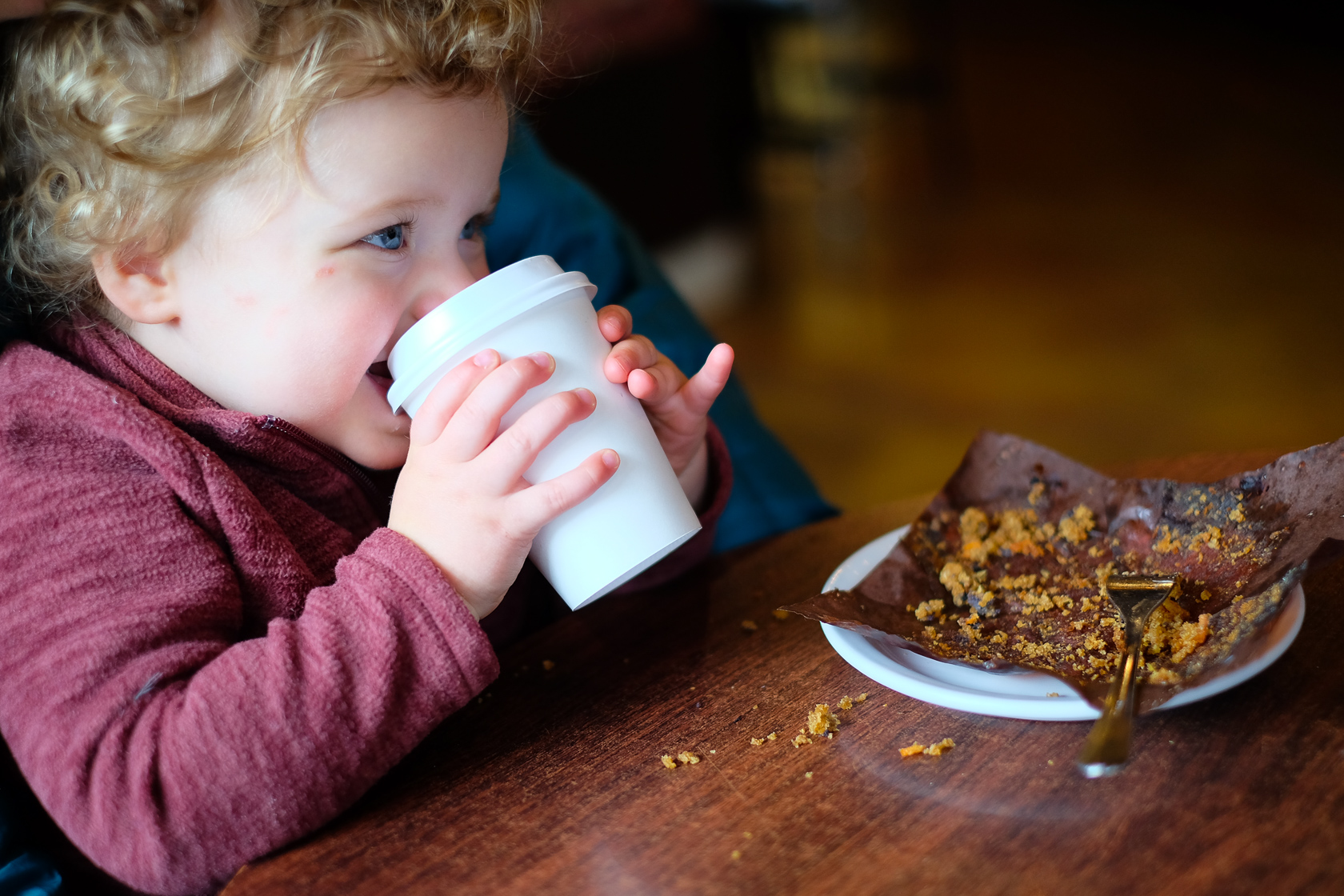 Every once in a while we lighten up and let her have a muffin and some hot chocolate.

One milestone people don’t tell you about is opinions. I remember reading about “meltdowns” as babies approach toddlerhood, but this is such a negative way to frame it. Really, they’re just opinions.

One opinion Idara has is that it’s better to catch her breakfast of yogurt and applesauce on her shirt than it is to catch it in on her bib. Now, this is just her opinion. She might be wrong.

Idara has learned the word for “no,” or should I say a word for no. It sounds like a dog chewing on a shoe and is accompanied by a slight shake of the head. Do you want to put on this hat? Nhhgnn. Can I wash your face? Nhhnnnggn. Should we change your diaper? Nghhn. 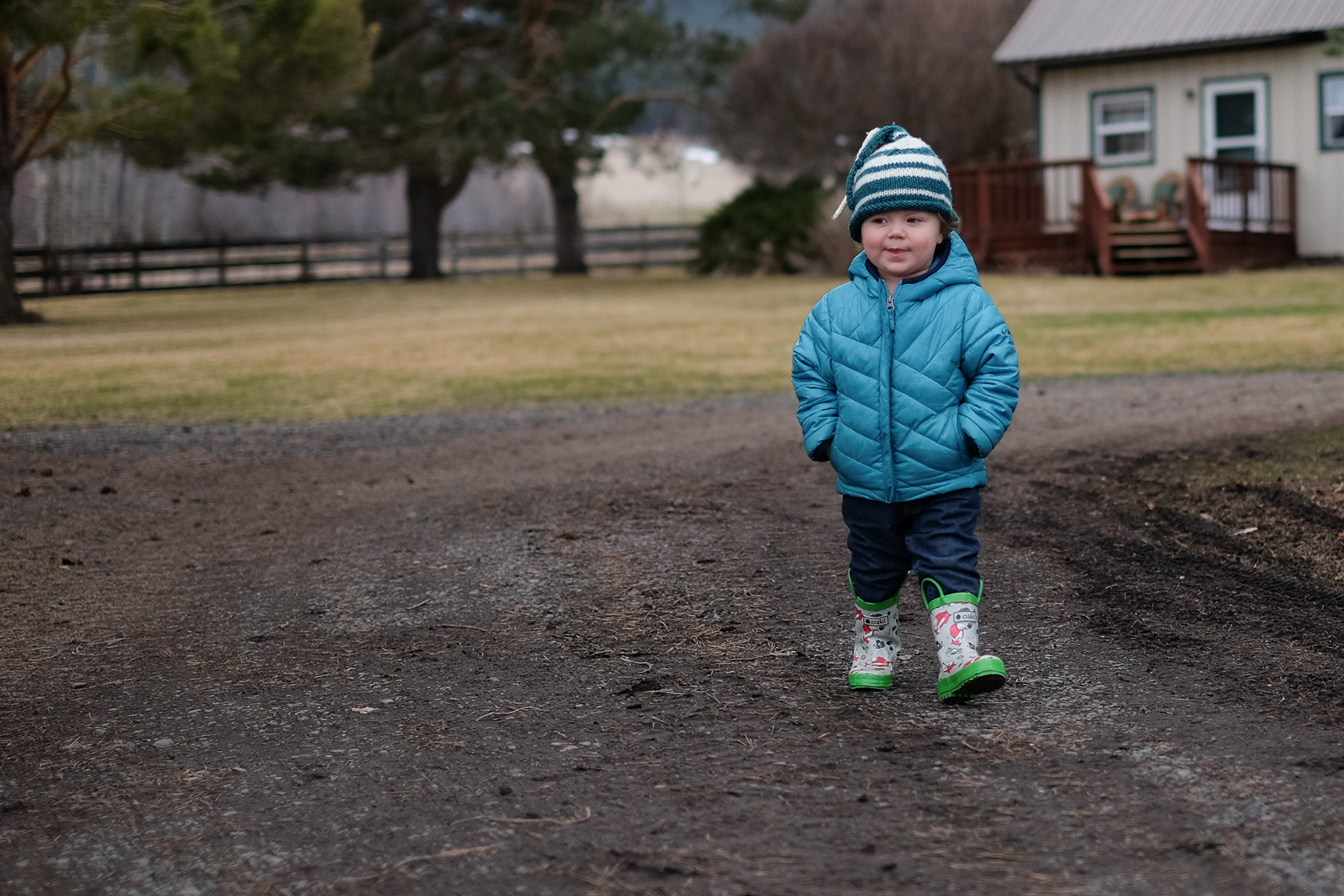 We spent part of spring break at a farm outside of Enterprise. Here’s Idara off to tend her sheep.

When Idara learned to walk back in December, I realized why they’re called “toddlers.” I don’t think I’d ever said the word toddle before, but I’ll be damned if it isn’t the perfect word to describe how she walks.

Everyone told us that as soon walking begins your life is over, since you’ll be forever chasing them or trying to keep them out of this or that. Walking, at least for us, was when life truly began.

As a crawler it felt like Idara needed constant attention, but now that she’s walking she’s proven quite adept at entertaining herself. She’ll spend some time reading next to her bookshelf, then she’ll move onto her blocks on the other side of the house, then she’ll spend some time in the kitchen requesting all of the snacks she knows. The outside, though, is the most enthralling. 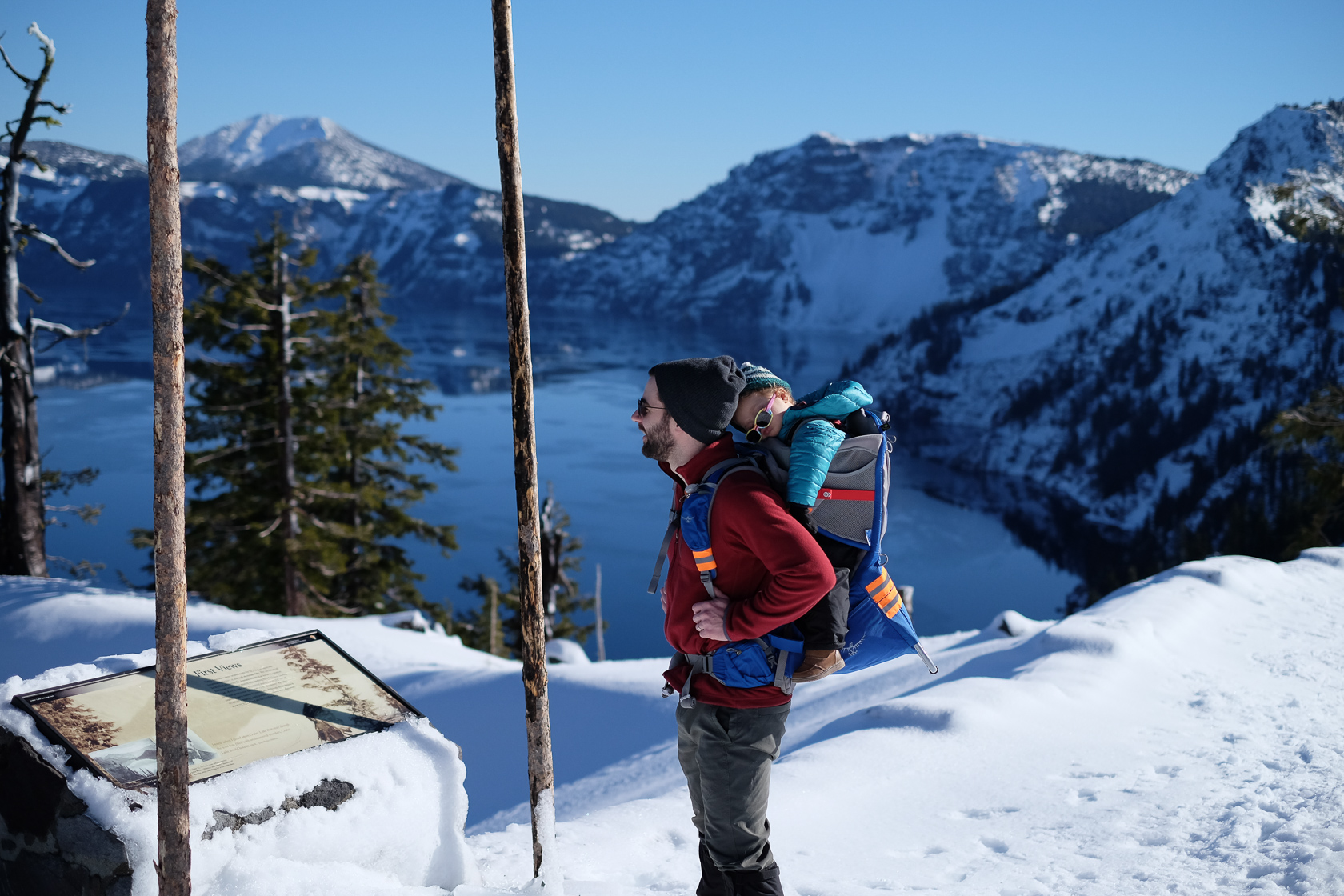 In January we took Idara to Crater Lake. She loved it.

When Idara was crawling we didn’t have much motivation to let her roam around outside. Summer might have been different, but as we were still right in the thick of fall and winter, crawling through wet grass and mud didn’t hold much appeal for any of us. Now that she’s walking, though, there’s no place she’d rather be.

It took us a couple of months to get to this point, but nowadays taking Idara for a walk in the neighborhood needn’t involve a stroller or even a backpack. We can strike out with nothing more than hats on our heads and shoes on our feet. Getting anywhere in any reasonable amount of time is impossible, of course, but that’s not the point. The point is to embark on a grand adventure and see where it takes you. Idara and I never make it far, at least not physically, but we do accomplish a lot of exploration. We look for worms and inspect the cracks in the pavement. We smell flowers and pick up leaves. 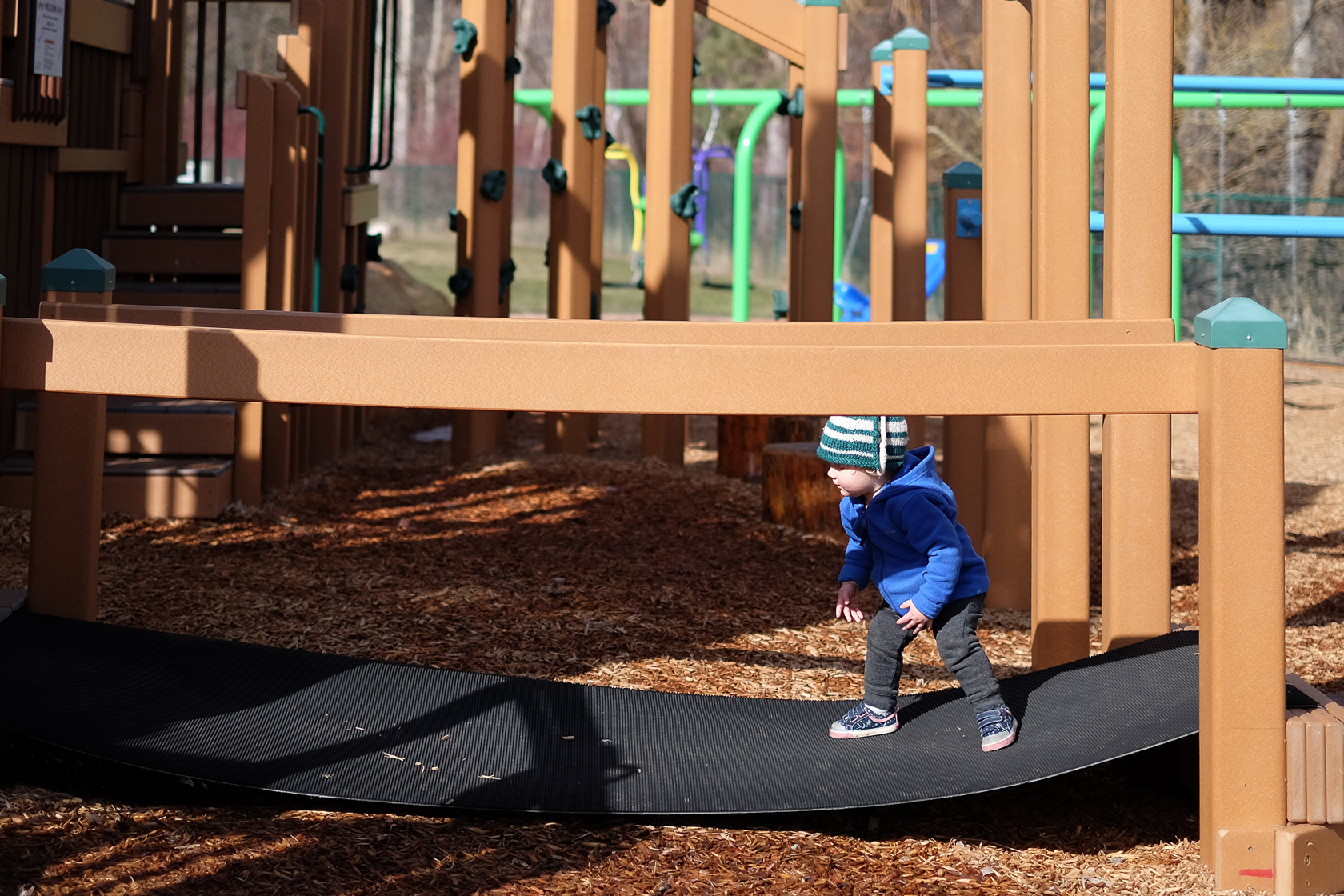 Idara’s still on the cautious side, but she’s starting to become more and more adventurous.

Over the past few weeks Idara has taken to collecting her discoveries and storing them in her pockets. A few days later, when wearing the same jacket, she’ll find the rock or pinecone or cigarette butt and present it to us in the palm of her hand. Remember this?

Idara knows a handful of words (mama, papa, baby, grammy, kitty, turtle, casa) but still prefers to communicate with signs. She started to pick it up quickly around 9 months or a year, and now it only takes a few seconds to teach her a new sign. The ones she employs the most are “food,” “all done,” and “park.” “All done,” which is signed by rotating both opened-hands at the wrists, is probably my favorite. She uses it at the end of meals or when it’s time for a new book or when she’d like to be taken out of her crib. Lately we’ve taken to singing songs to her to distract her during diaper changes, and if she doesn’t like whatever you’ve come up with, she’ll let you know. “Twinkle twinkle little star…” All done. “The wheels on the bus…” All done. “The ants go marching…” All done. It’s like we’re pouring our hearts out on Extreme Gong and she’s had enough. Next! 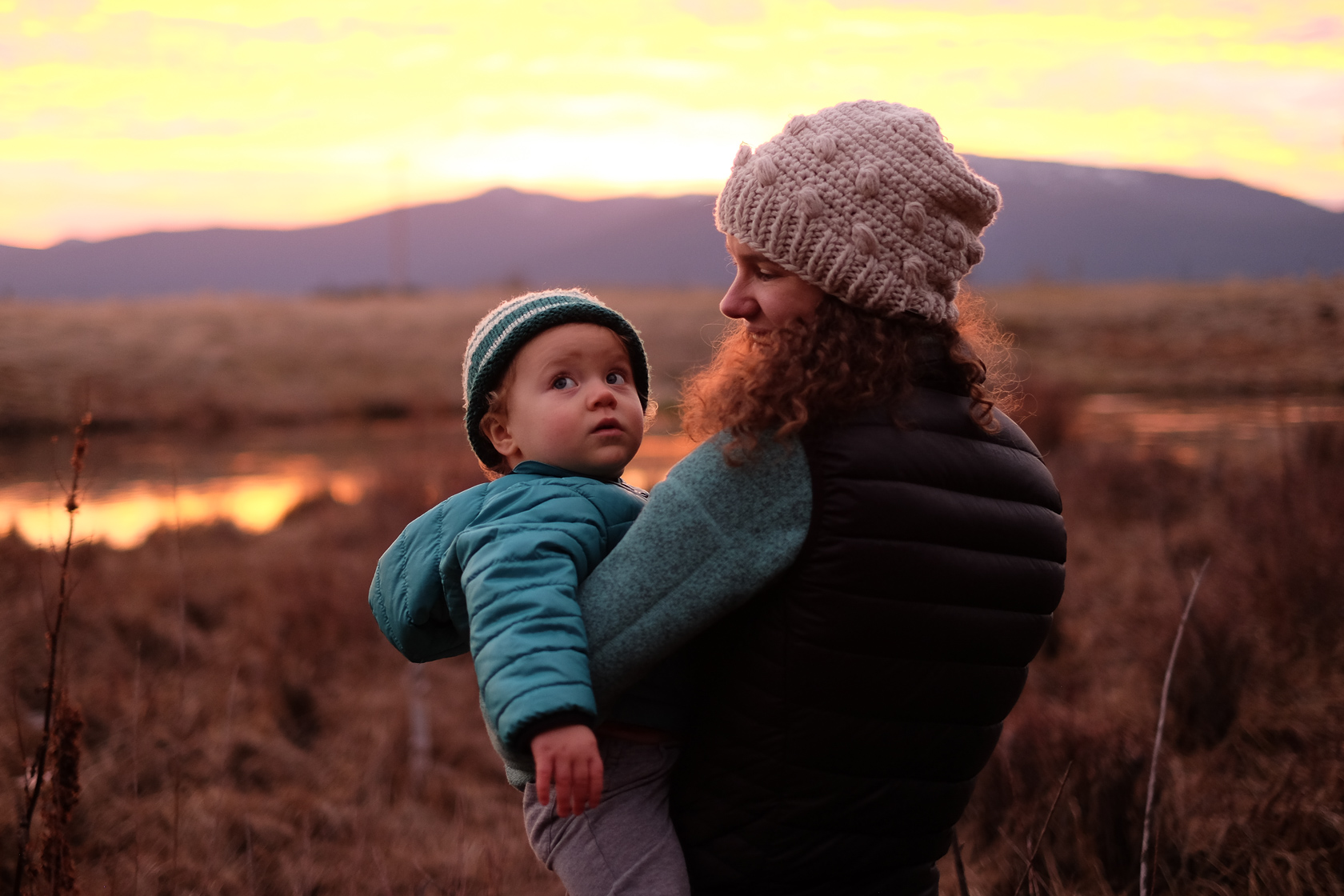 Idara with Rachael on the banks of the Wood River near Crater Lake.

Idara has a knack for employing the sign for park at the least opportune moments. Sometimes she signs it before we’ve even picked her up out of the crib, or when we’re in the middle of a long drive, hours from civilization. She’ll even sign it as we’re leaving the park, as if the only thing that’s better than an hour at the park is two. Of course, that’s just her opinion.