Last weekend I showed our car to Les, a man who was interested in buying it. While he looked it over we were careful to keep our distance. We wore masks, didn’t shake hands, and when Les took it for a test drive I sat in the back seat and rolled down the windows. Once he was sold on the car, we signed the documents, passing a pen back and forth, and he gave me the cash. He then dropped me off at the house and just like that, the car which had been the collective legs of our small family for the past three years was gone.

I tried to put the thought of saying goodbye to the car out of my mind, and thanks to the demands of a new job, an odd working and sleeping schedule, a global pandemic, and a presidential election, I was largely successful. And then on Thursday, five days after meeting up with Les to sell the car, he sent me a text.

“I feel obligated to tell you that I just got results back and I’ve tested positive for Covid. No idea how/where I contracted but we obviously had interactions and I feel you should know.”

My heart sank. If he had it, then maybe I had it, too. And if I had it, then surely I’d spread it to Rachael, or Oren, or Idara. Physical distance is the order of the day outside the house, but inside it couldn’t be any more different. We hug, we kiss. I’m too lazy to cut up Oren’s food so I use my teeth. And Idara has this disgusting and adorable habit of doing “tongue touches” with Oren, a fact I simply cannot wait to regale them with when they’re 11 and 14, and 12 and 15, and best of all, 13 and 16.

As soon as I received the text I thanked Les for his honesty and took my temperature to confirm that I did not have a fever. Then I called the nurse-on-call at our clinic. She said it would be reasonable to get a test since I’d been exposed, and helped me set up an appointment as soon as their office opened. Within a few hours I had talked to the doctor and been directed to the testing center that Oregon Health and Science University, Oregon’s public medical college and hospital network, is running in the parking garage of the Oregon Convention Center.

There are about 200,000 cases in point of America’s collapse, least of which being a White House that has repeatedly played down the pandemic only to find it spreading openly in their midst. But what I saw at the Oregon Convention Center was as strong a counterpoint as I could’ve imagined.

Here’s how it went: I pulled up to the parking garage to find a nurse waiting in the ticket booth. I cracked my window and she asked me about my exposure and symptoms to determine whether I was eligible for a test. She told me to follow the cones through the parking garage which eventually led to a man in an orange vest directing cars with a lit-up orange wand. He queued me up behind a line of cars and made the “turn off your engine” hand motion. And then I sat in the car and waited.

I’d arrived about thirty minutes early, as had a few dozen other cars. Once the clock turned over to 9 a.m., the man with the orange wand began pointing at the waiting cars and directing them into two lanes, each of which was lined with nurses with masks and face gear. The drivers started their cars and pulled forward. Once the lanes were full with about five cars each, the nurses went to work, talking to the people inside and carrying out the test.

There were a couple rounds of this before it was my turn. The man with the orange wand directed me to the lane on the right and as soon as I pulled up a nurse wheeled her computer stand over to me and asked my name and date of birth, as if I were checking in at the doctor’s office. She then asked me to pull forward to the next station where a nurse handed me a piece of paper and explained the details of the test. There would be no charge for the test, the second nurse said, and I’d receive results via email in 2 to 7 days. If I tested positive, she said, I’d receive a phone call, too. The conversation lasted about two minutes and then she waved me forward to the testing station.

The nurse at the testing station informed me that the test would be “uncomfortable but not painful.” He asked me if I wanted him to count down before jamming the swab into my nose, which in retrospect should’ve been a clear tell that it would be uncomfortable and painful, but I declined his offer. I rested my head against my headrest and he inserted the swab so deep that it felt like he was tickling my brain. And not tickling like when Idara laughs and then asks me to keep tickling her. It was more like when Rachael tickles me and I end up on the floor with muscle spasms, gasping for air. I don’t want to dissuade anyone from getting a covid test if they think they’ve been exposed, but holy smokes — it is no joke. I didn’t even know that part of my nose existed, and frankly I’d like to forget.

After withdrawal he stuck the swab into a test tube and told me to have a good day. I pulled out of the parking garage, snot pouring out of my nose and tears streaming from my eyes, and tried to wrap my just-assaulted brain around the possibility of waiting a week, or longer, to know the result.

Instead of having to wait a week, though, I received the results about 14 hours later. I checked my phone as soon as I woke up the next morning and found a notification informing me that my “covid 19 test results are: ‘not detected.’” It was one of the happiest moments I’ve experienced in the past seven months. My mind jumped back to the potential knock-on effects had I been sick, and then just as quickly as the thought had arrived I pushed it back out again.

Right after learning that I’d tested negative for covid I found out that President Trump had tested positive. I’ve since spoken with several people whose schadenfreude was in full swing, but I can’t muster the same reaction. It would be enormously hypocritical for me to celebrate both my negative test and anyone else’s positive test. No, I wish the President a quick recovery. And anyway, it’s impossible for me to feel much else besides anger at the fact that the people who are supposed to lead us out of this quagmire are instead making it worse: questioning the efficacy of masks, flouting physical distancing recommendations, spreading it among themselves, and on, and on, and on. And not only that, but with their attempts to repeal Obamacare either via Congress or the Supreme Court, they’re actively trying to prevent people from obtaining the health insurance that would provide coverage in precisely this scenario.

Literally every conservative I’ve talked to about the pandemic has downplayed its seriousness and yet as I write this the President of the United States has been hospitalized because of it. Trump himself knew that it was a big deal back in February. Perhaps some of his supporters are realizing that now, too.

There is no question in my mind that the Trump White House has failed the country with its response to Covid-19. They can’t even protect themselves, let alone us. But based on my experience over the past few days, I don’t believe that we as a country are a failure. Les and I likely prevented my infection by wearing masks and rolling down windows. When Les found out he was positive, he went out of his way to tell me about it so that I could get tested, too. And the testing center I went to was a model of speed and efficiency. Of course we’d be better off if these experiences were more widespread, but that’s not to say that they don’t exist at all.

I’ll finish by pointing out that I’m not in the clear. While my negative test result and lack of symptoms this Saturday morning make it unlikely I was infected a week ago, I still could’ve gotten sick when I met people outside on Tuesday, or when we went for ice cream yesterday. We could lock ourselves inside for the next year, but I think we’ll be better off continuing to live our lives while following what we know to be best practices: avoiding indoor gatherings, wearing masks, and voting for people who take this seriously. 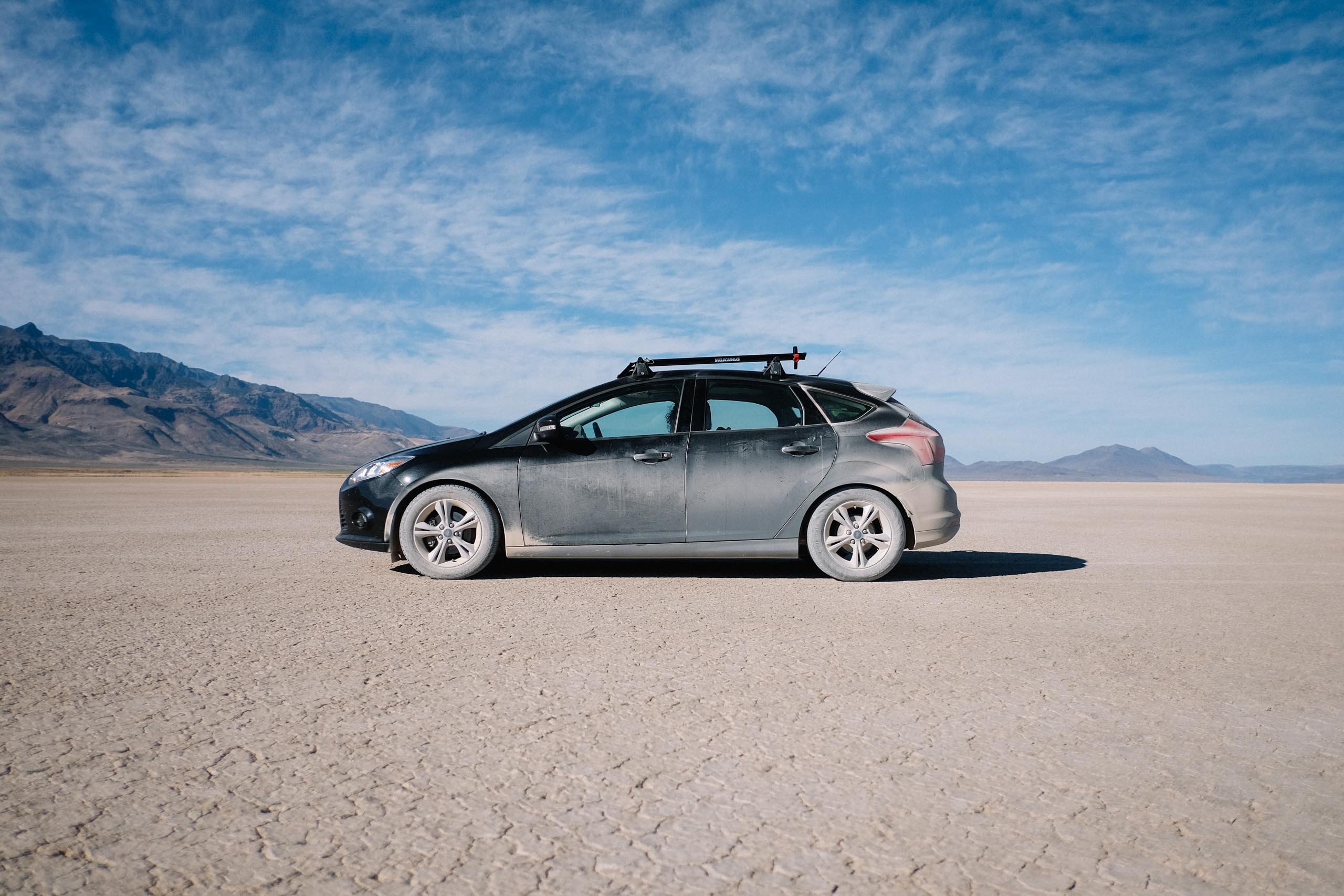 I can’t help but include my favorite picture of the car we sold. This was during our camping trip on the Alvord Desert in 2018.