Road Trip to the Alvord

Rachael and Idara and I recently returned from a five day trip to Steens Mountain and the Alvord Desert. We started off in Hood River, where I’d recently finished a summer internship. We stayed the first night in Redmond, then stopped to visit friends in Bend, and then continued on to Page Springs Campground, just east of Frenchglen. We stayed there two nights, then spent one night on the playa of the Alvord Desert, and then returned north via Redmond. Here are some pictures. 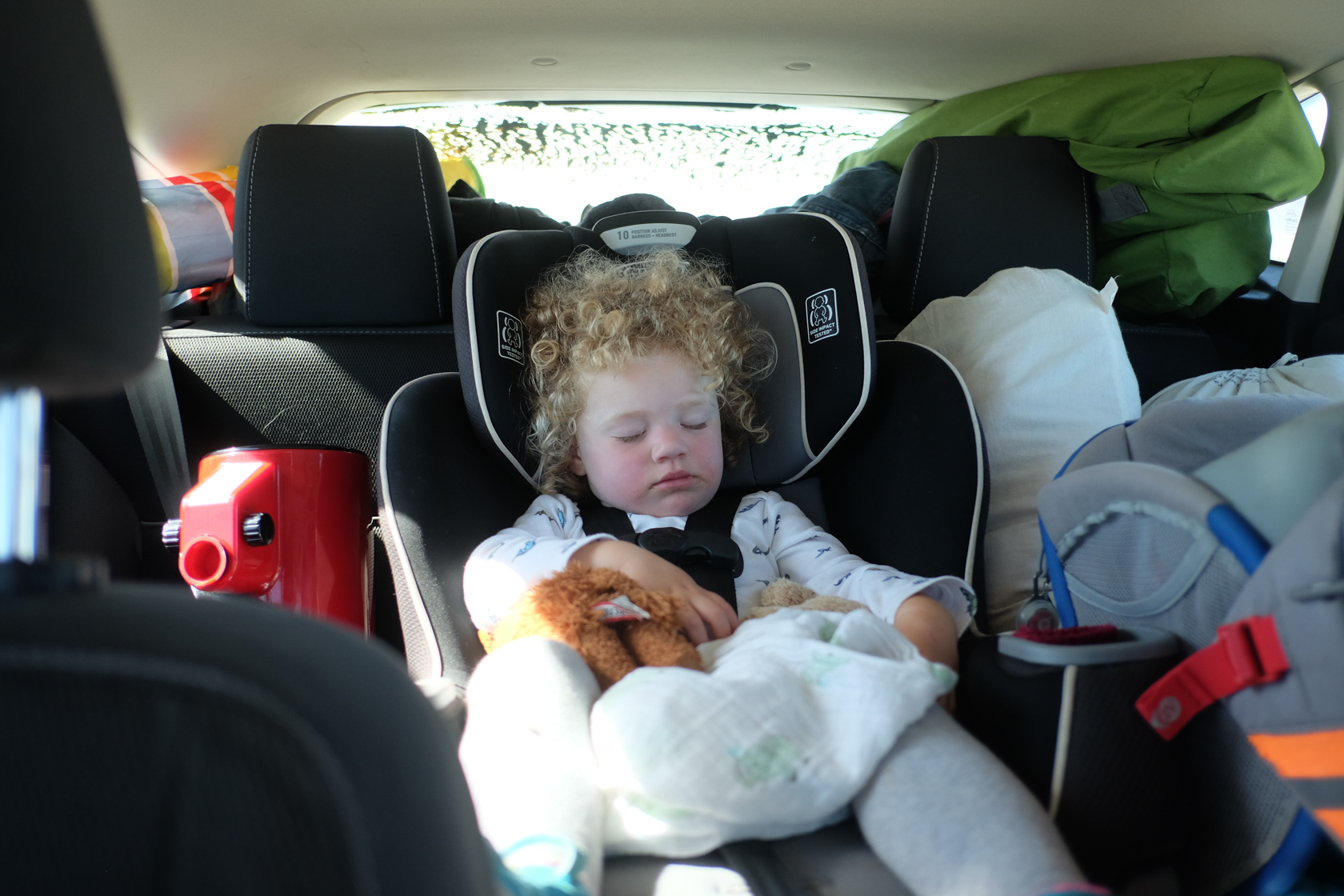 It’s a bit of a tight fit in the Focus, but we make do. 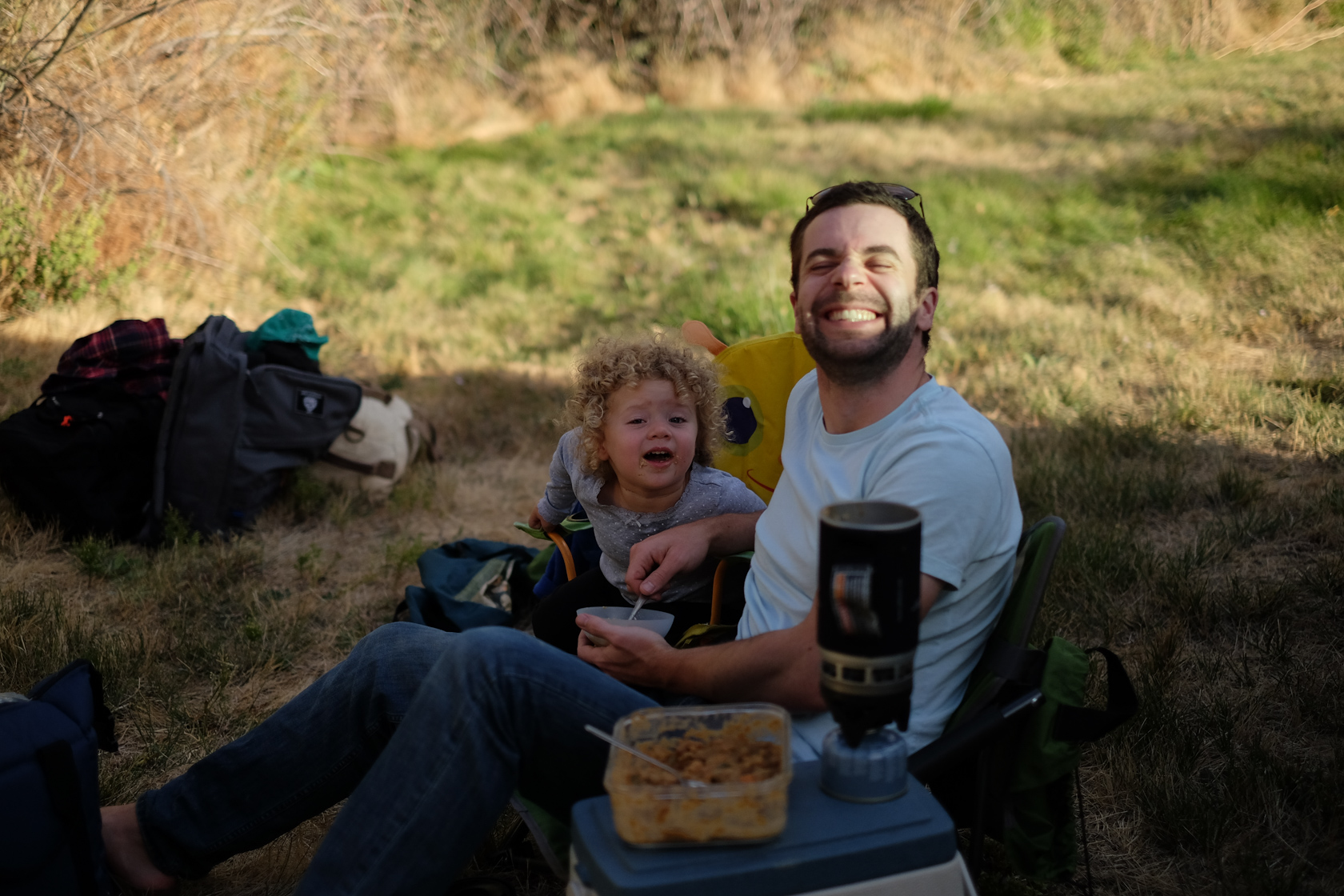 The campground was full when we arrived. Faced with the prospect of camping in a nearby field or driving half an hour to another campground, we decided to just camp in a grassy area near the campground entrance. All the old birders and fly fishers looked at us funny, but there was no camp host to shoo us along. Problem solved. 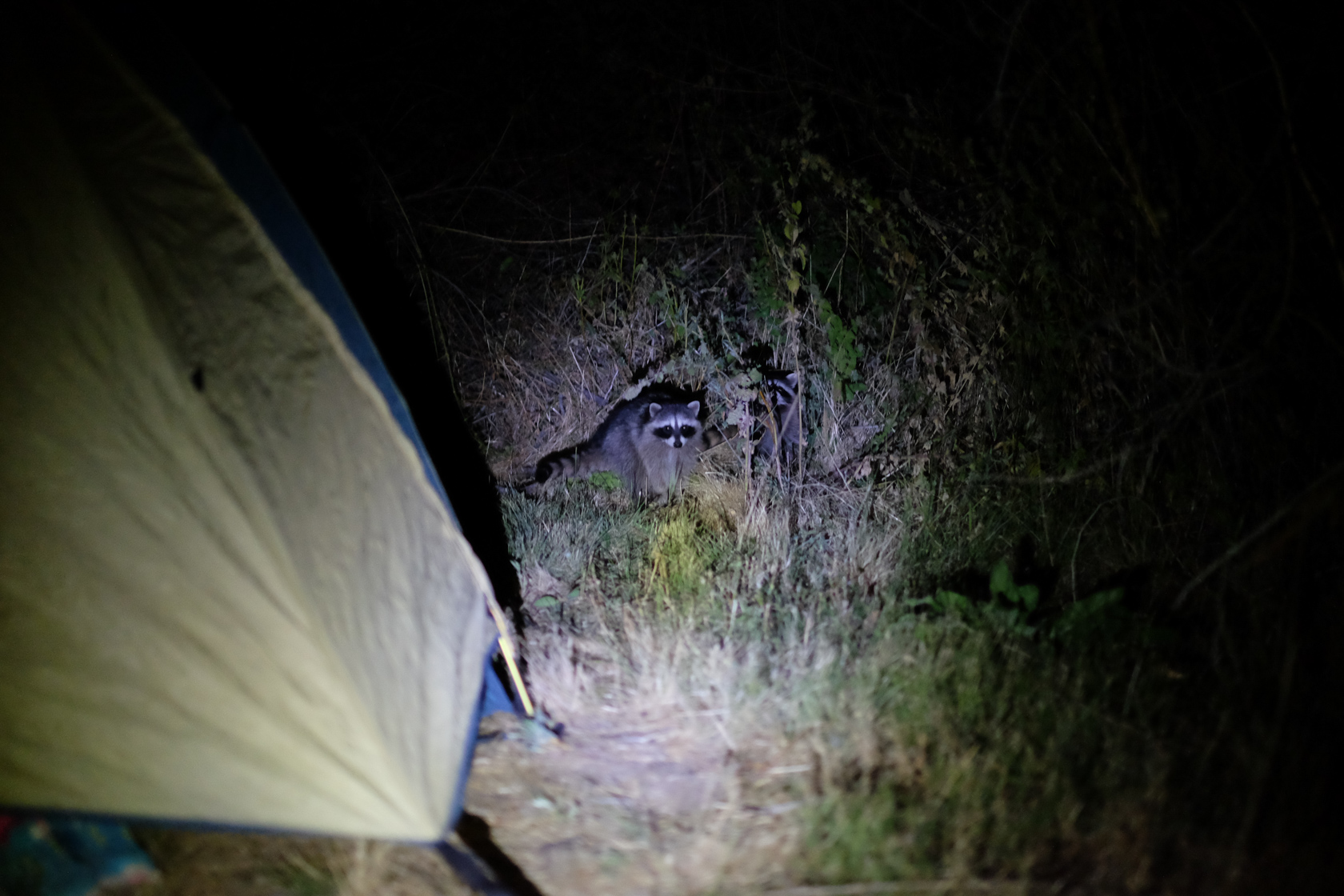 After we put Idara to bed in the tent, Rachael looked over in the bushes nearby and said, “It’s a cat!” Instead of a cat, my flashlight revealed a family of racoons. I tried to scare them off with the flashlight but they stood their ground. After about 15 minutes of shuffling back and forth, they went on their way. 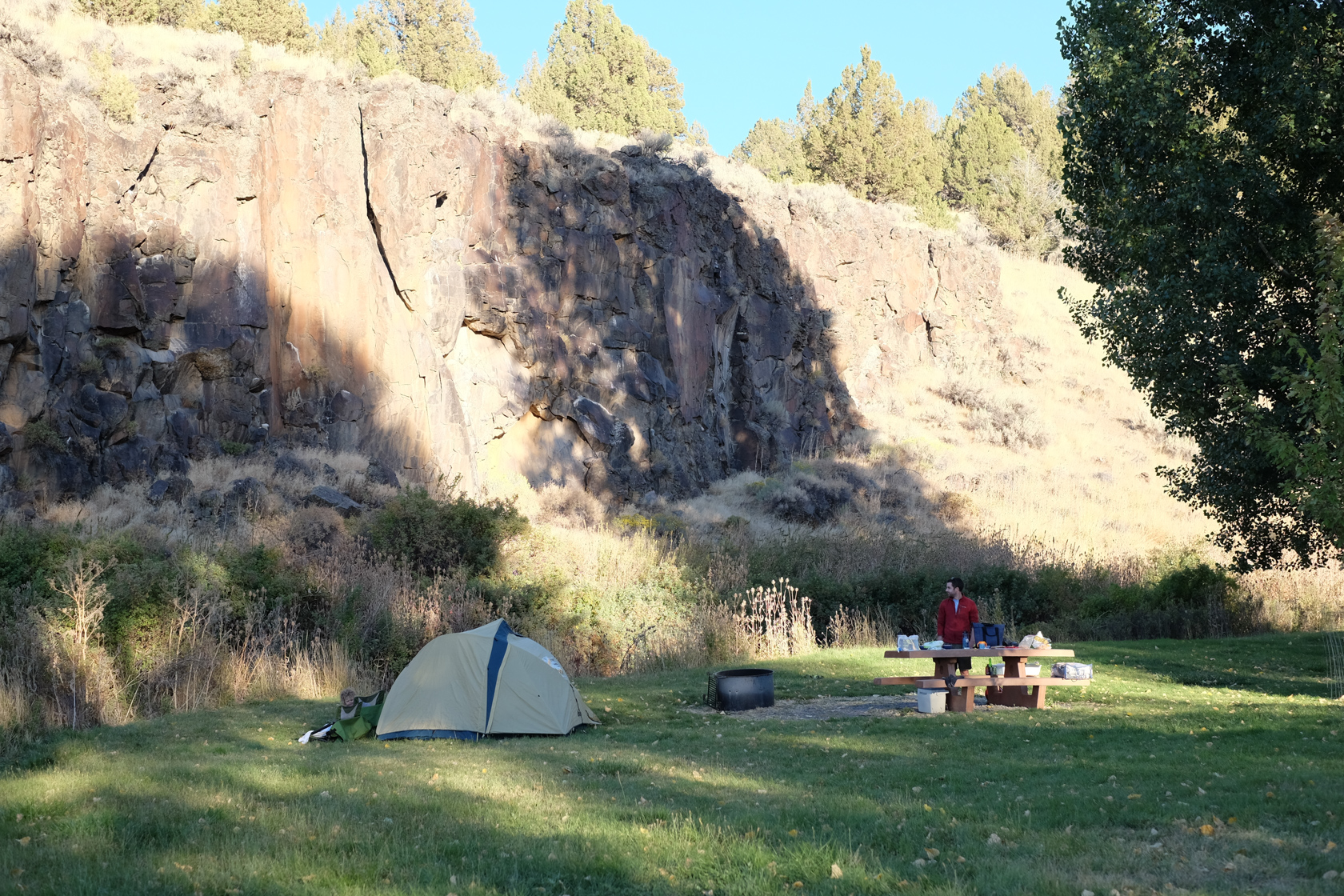 The next day we moved into a proper site. The biggest improvement was the picnic table. Cooking on the ground is hard. 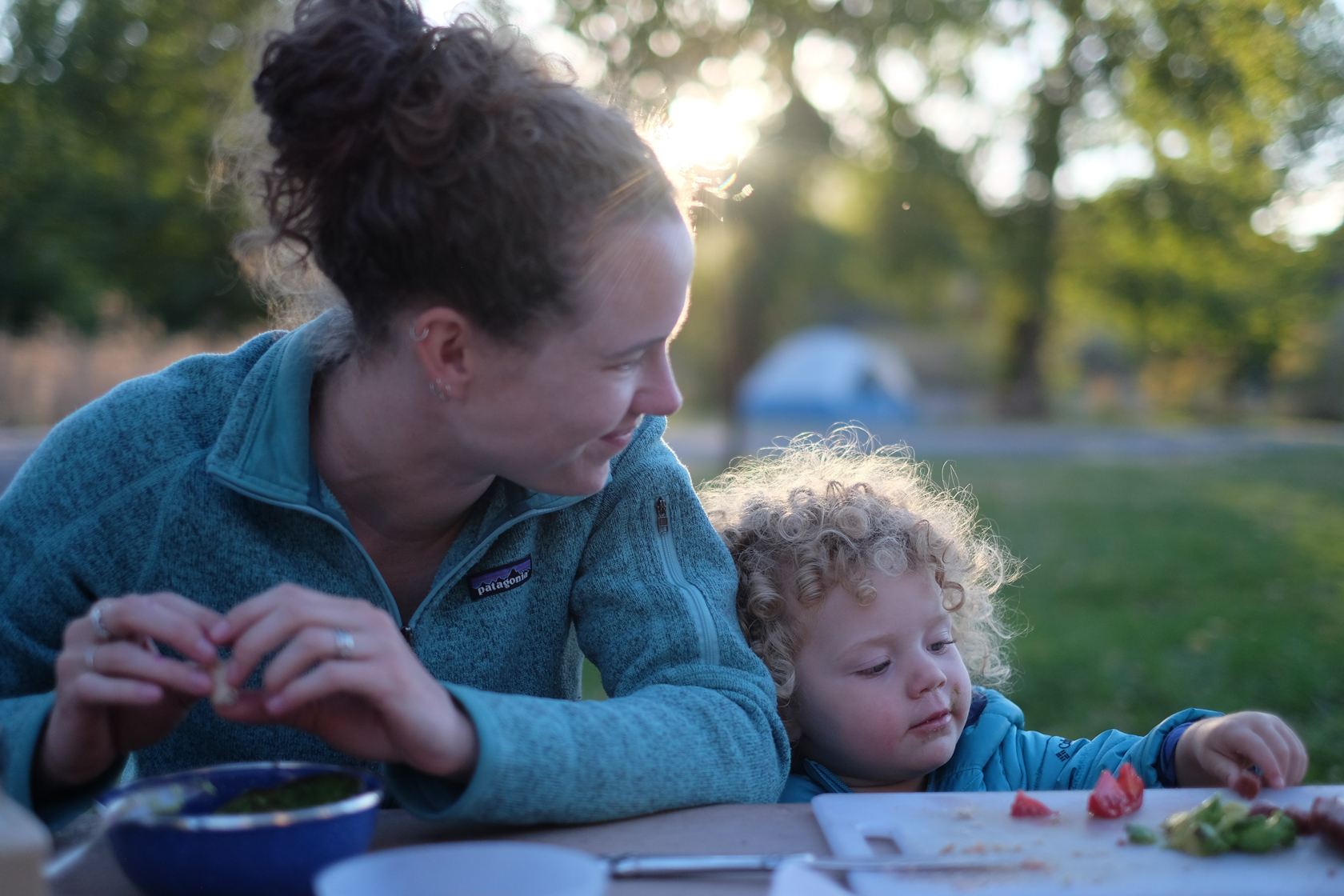 Idara and Rachael eat tomatoes, avocado, and hot dogs out of the JetBoil. 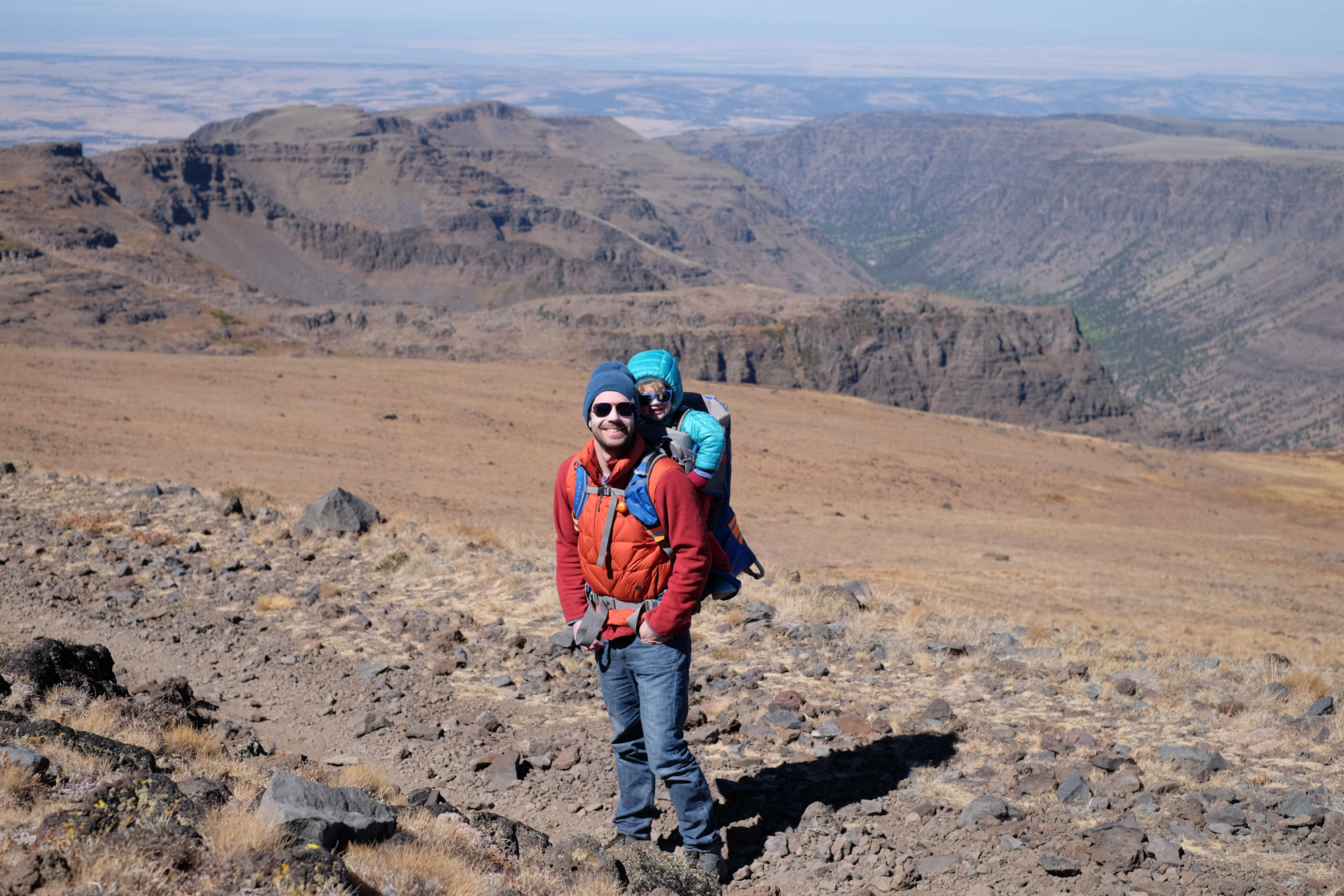 We drove up to the summit of Steens Mountain. It was windier than hell, and cold too, but once we hiked down into one of the nearby canyons it was much more pleasant. 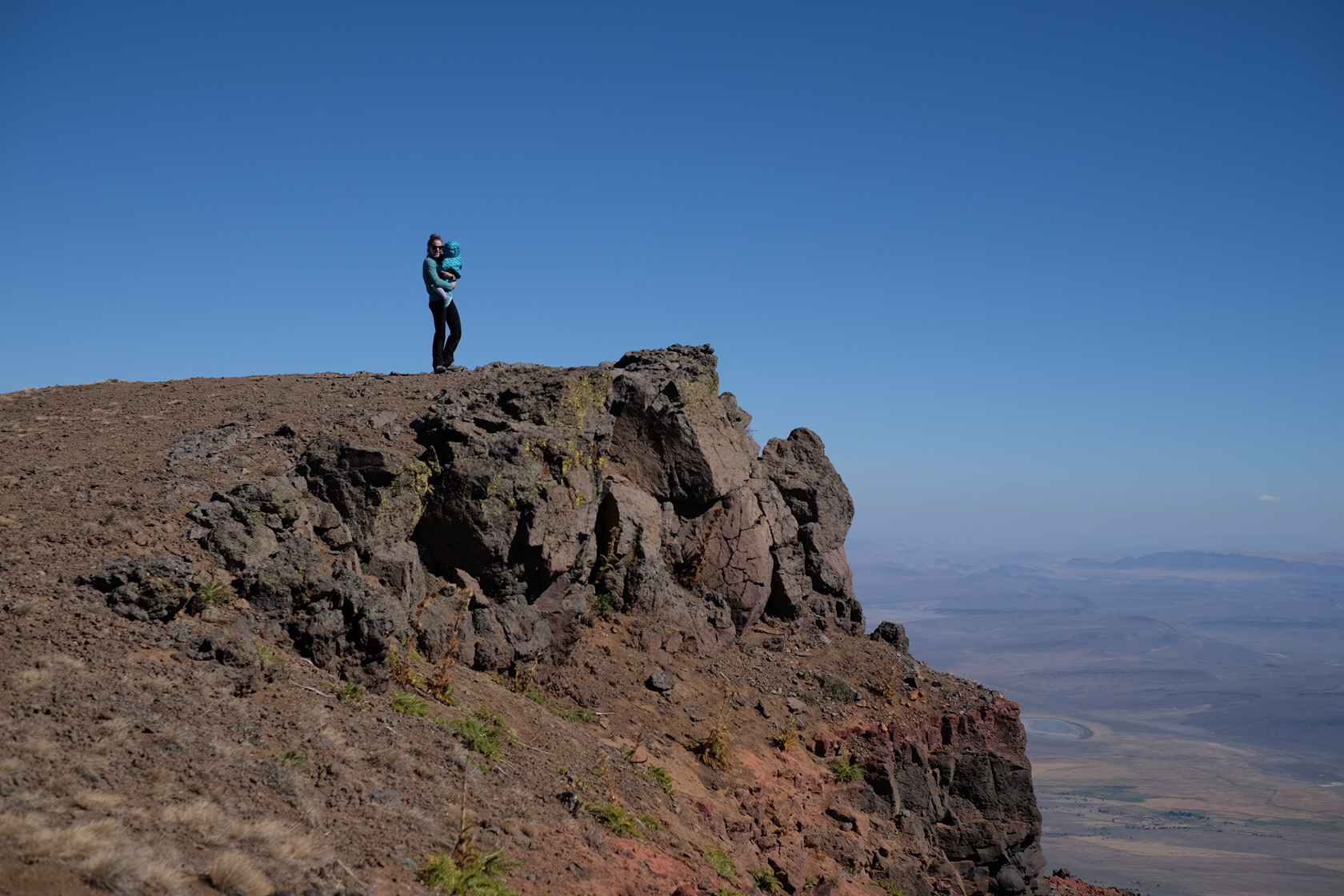 The ridgeline of the Steens rises a vertical mile above the Alvord Desert, which makes for a beautiful vista. 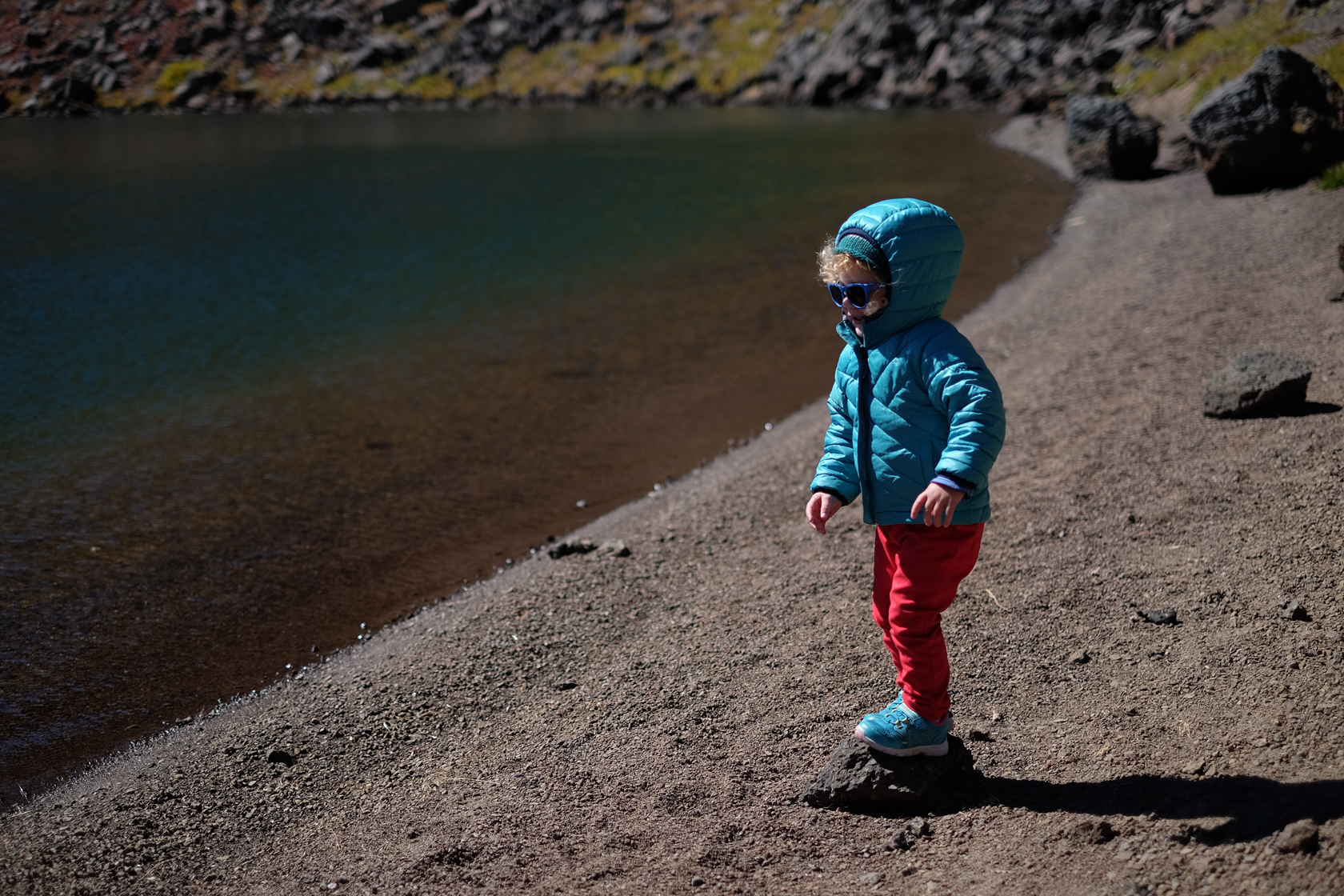 A man we met along the trail joked that the hike to Wildhorse Lake was 1,900 feet down and 3,600 feet back up. With Idara on my back, that felt about right. The destination was worth it. 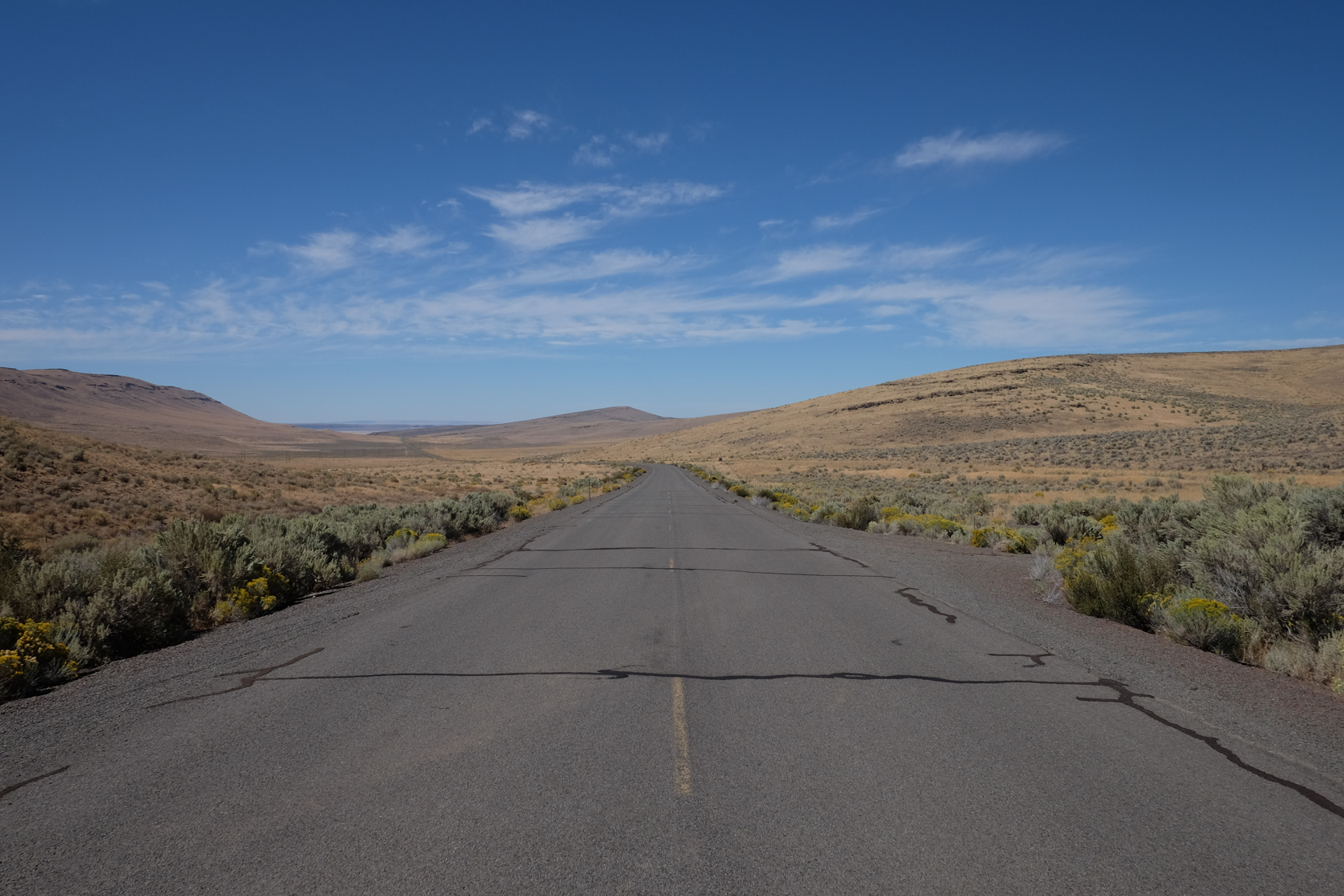 On the way from Frenchglen to Fields, I had to stop and take a picture of the long, empty highway. It was hard to imagine that we were still in Oregon. 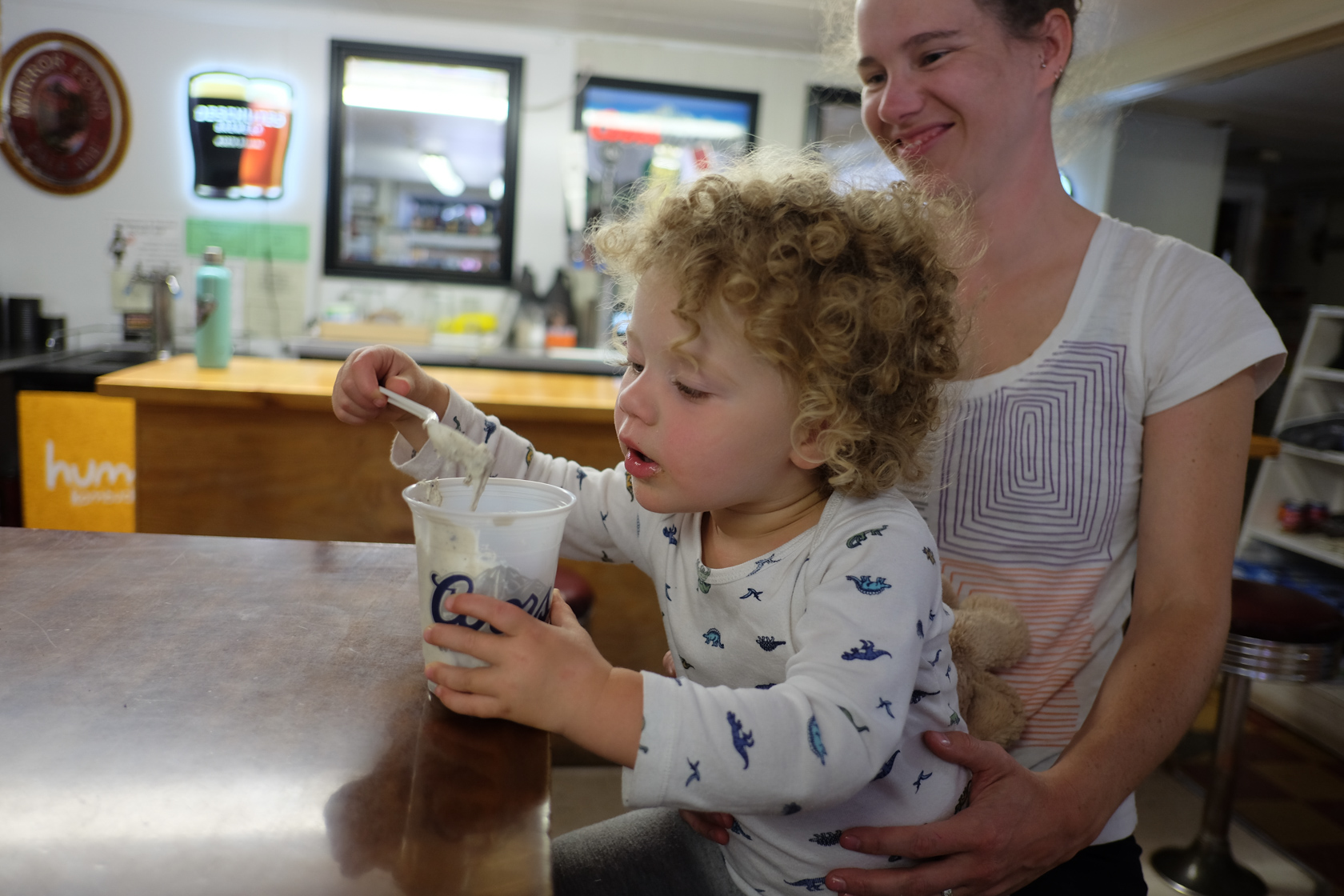 Apparently it’s not really a trip through Southeastern Oregon without a stop in Fields for a milkshake. We split one three ways, and it was incredible. 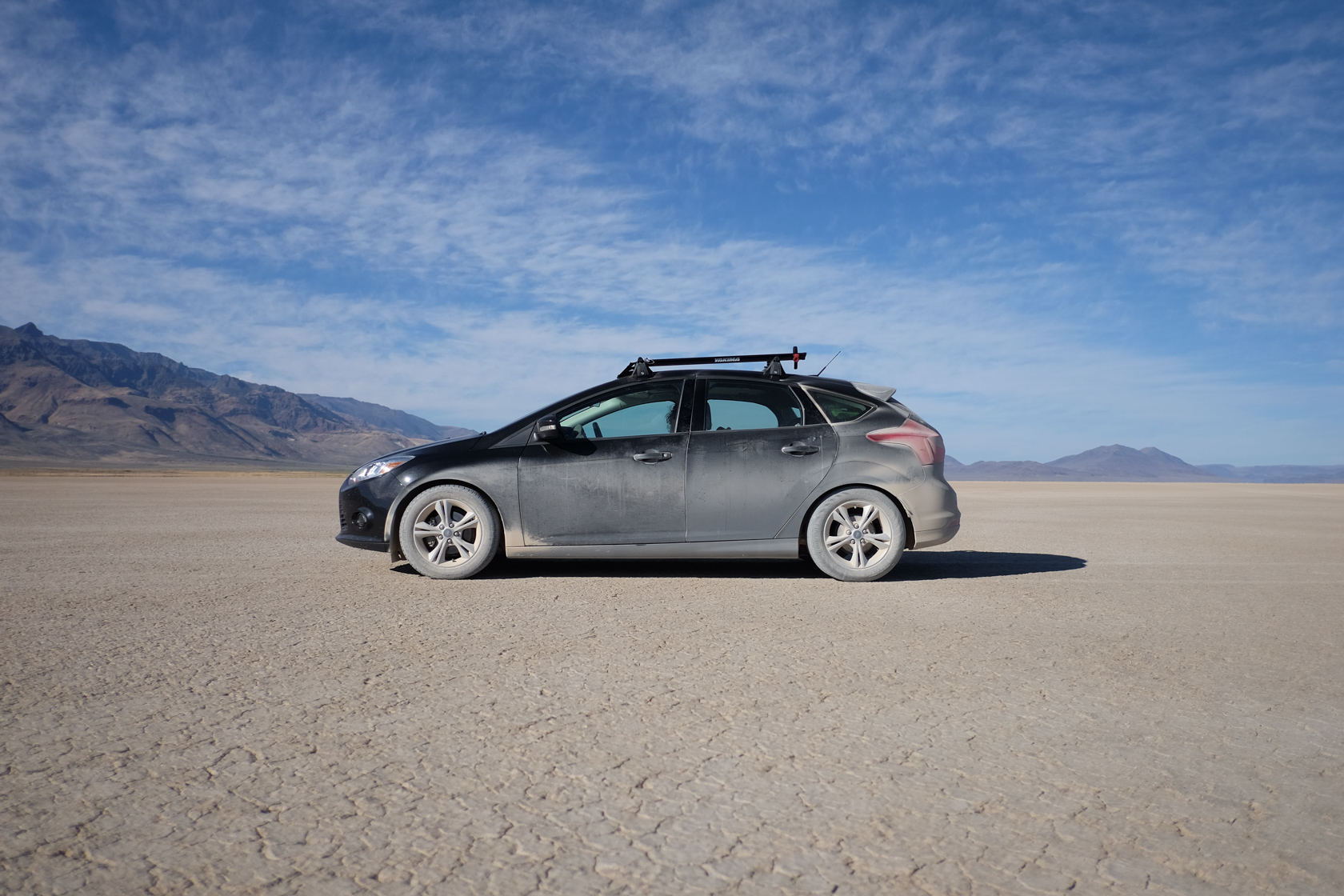 After a hundred plus miles on gravel roads and driving all over the playa, the car was filthy. I think it’ll carry memories of this trip (in the form of dust) for as long as we own it. Another memory we’ll never forget is that when we went to start the car the next morning…it didn’t. Thankfully there was another car about a mile and a half away from us on the playa, so I walked over and they came and gave us a jump. We had plenty of food and water, and the hot springs (which is staffed) wasn’t too far away either, but it was definitely an ‘oh crap’ moment. 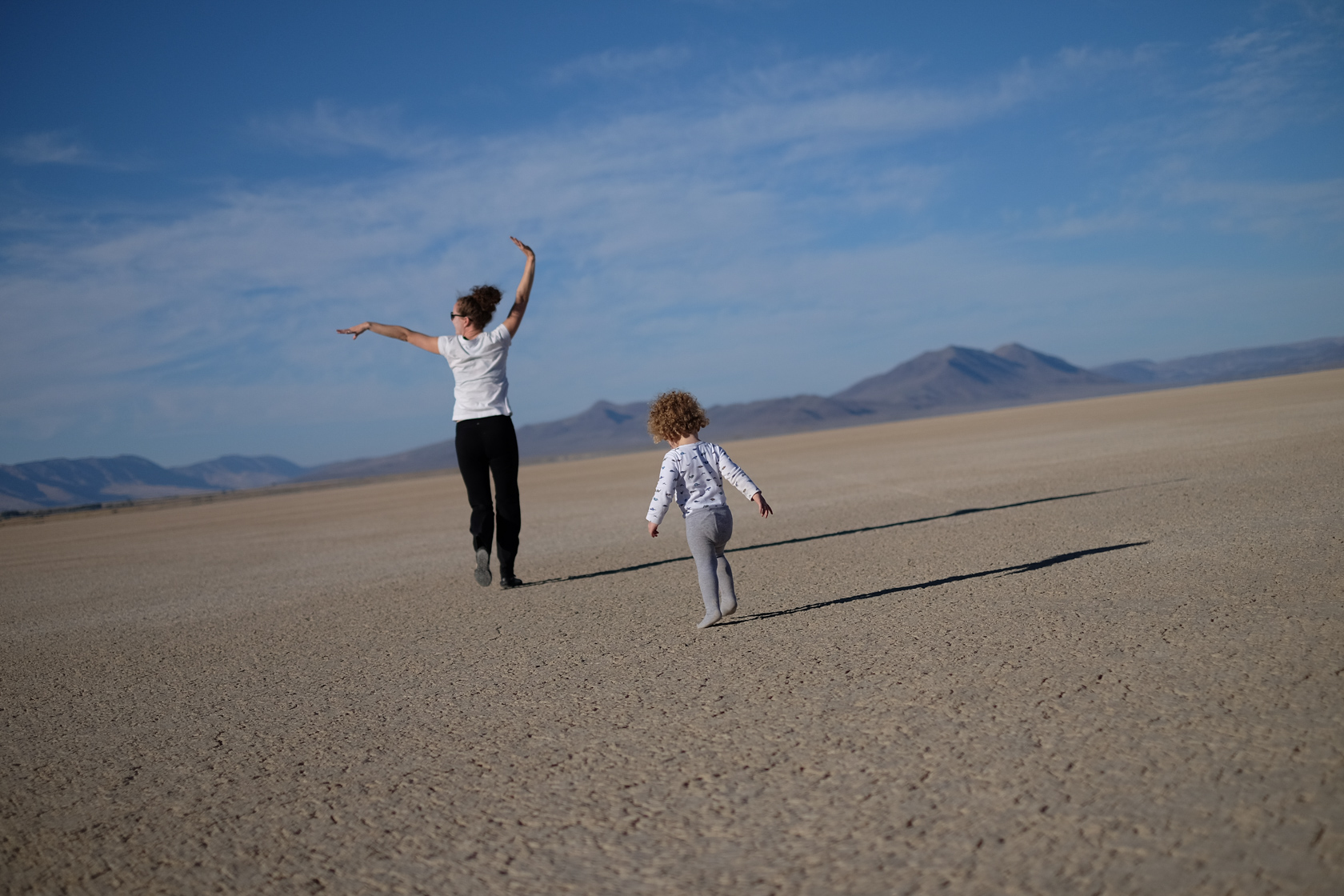 Sometimes just running across the playa provided all the entertainment we needed. 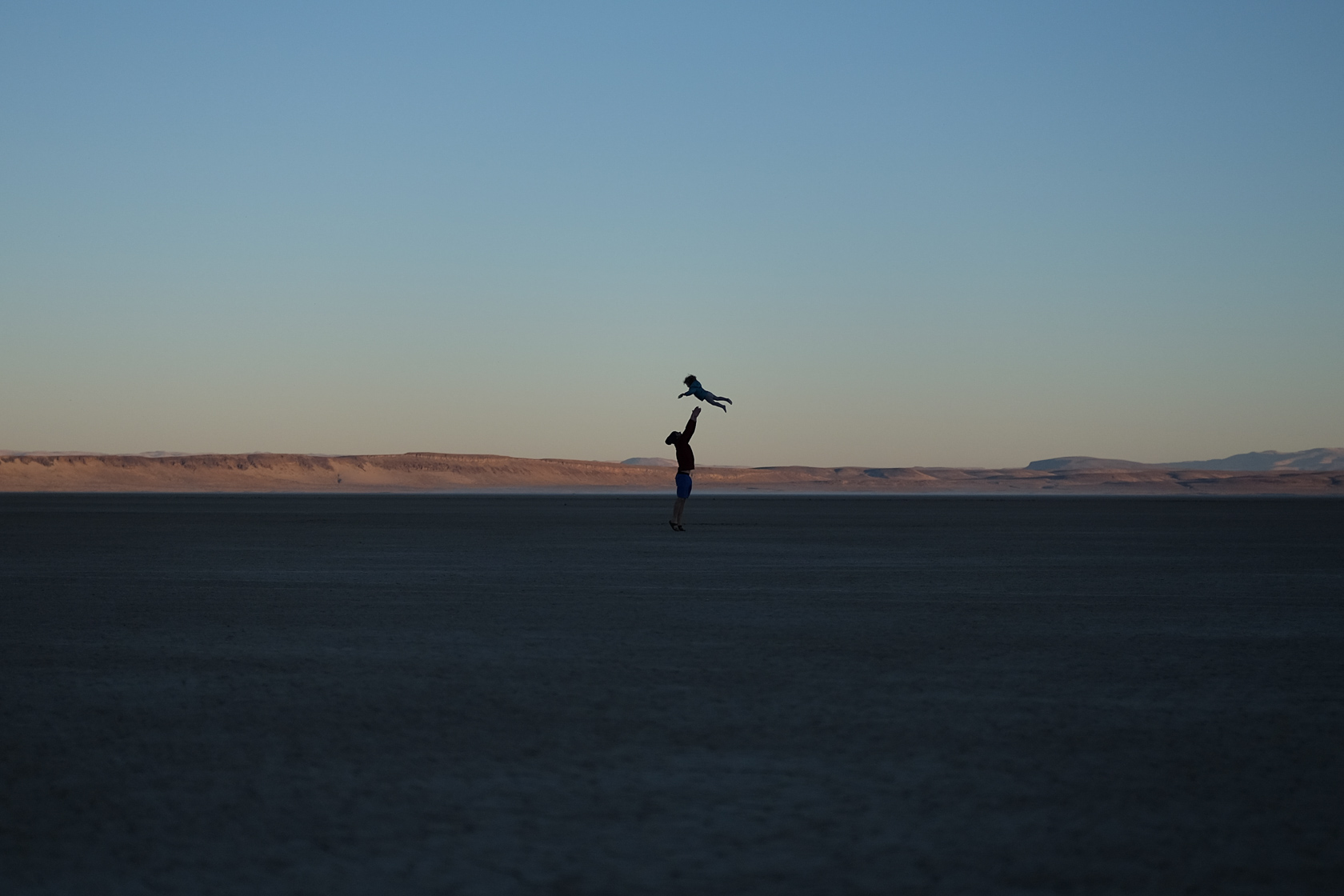 Every time I brought Idara back down she’d say, “More! More!”. 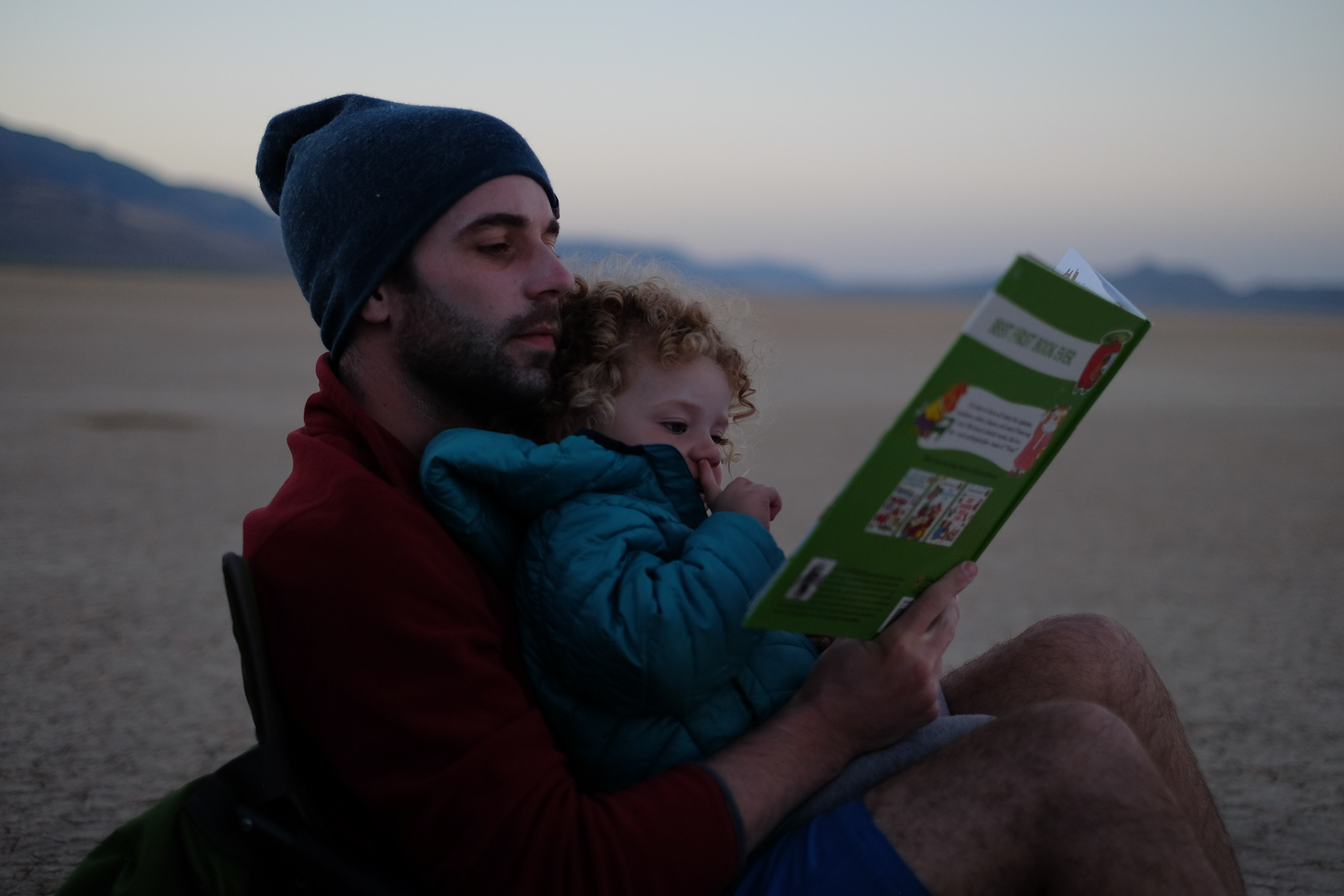 Idara’s favorite activity these days is reading. And, of course, picking her nose. 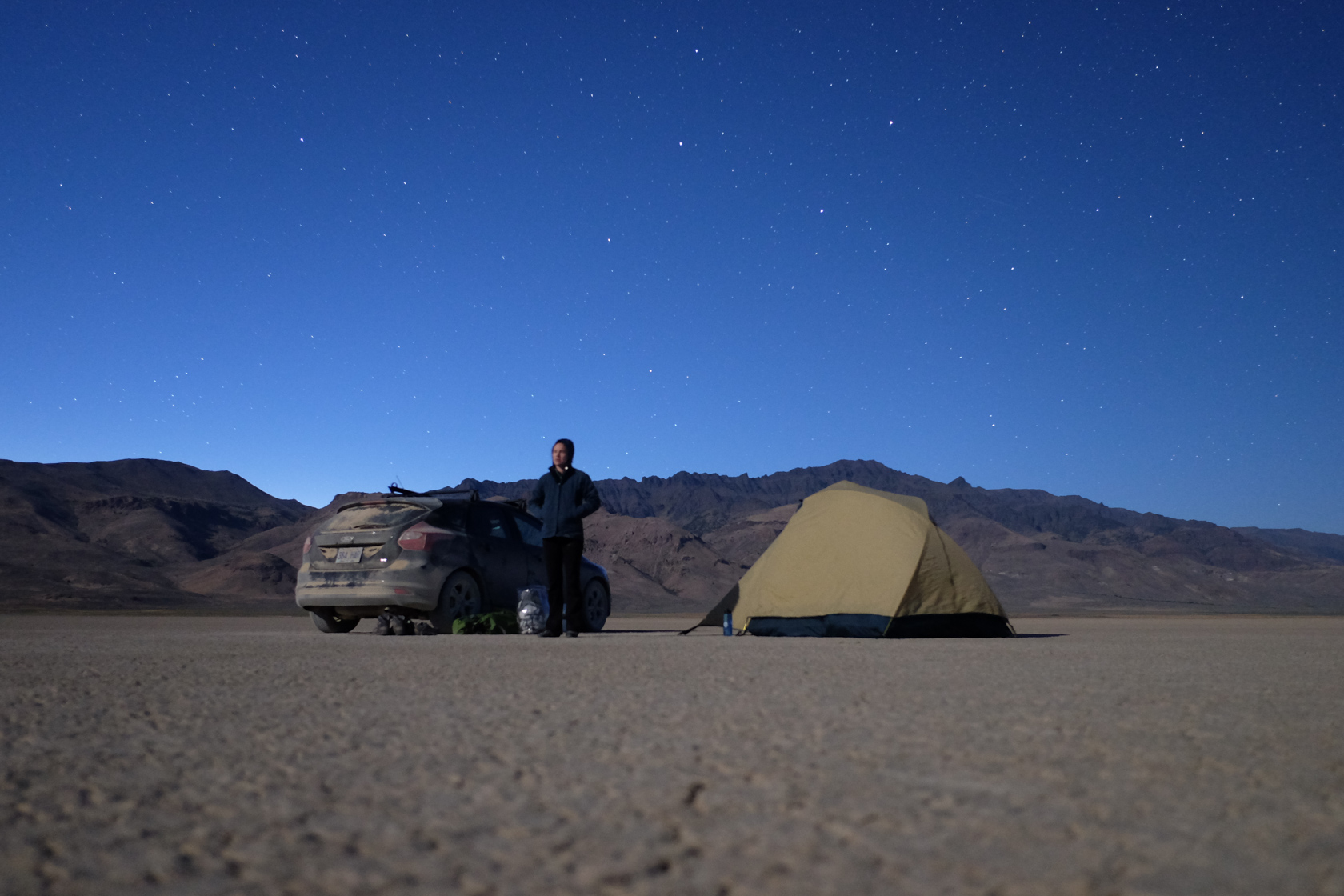 There was a half moon, but the stars were still beautiful. 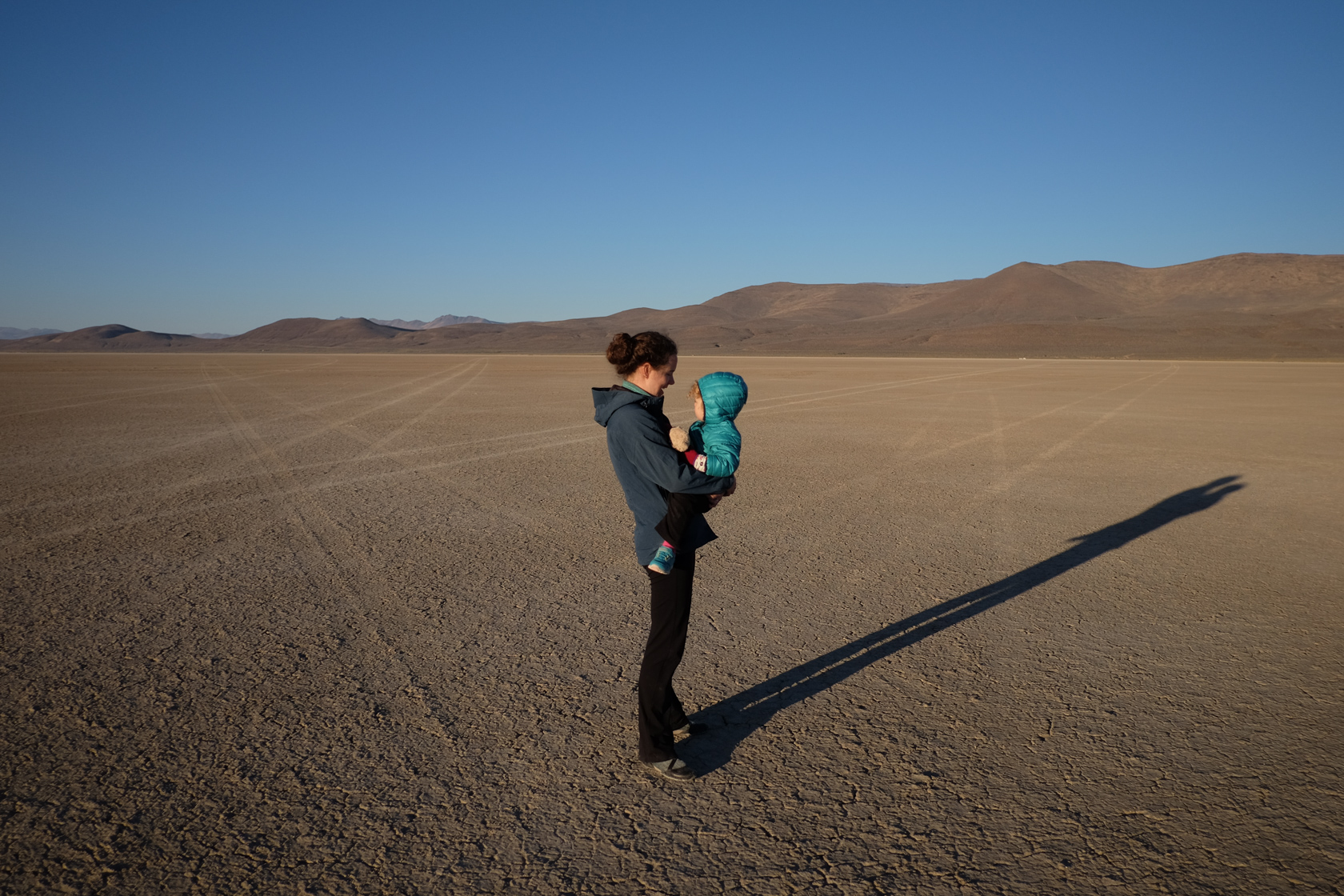 The light on the desert playa was perfect. Unfortunately Idara got us up long before that light was even visible. Still, I can’t complain. It got down into the mid-30s at night but Idara still slept pretty well. 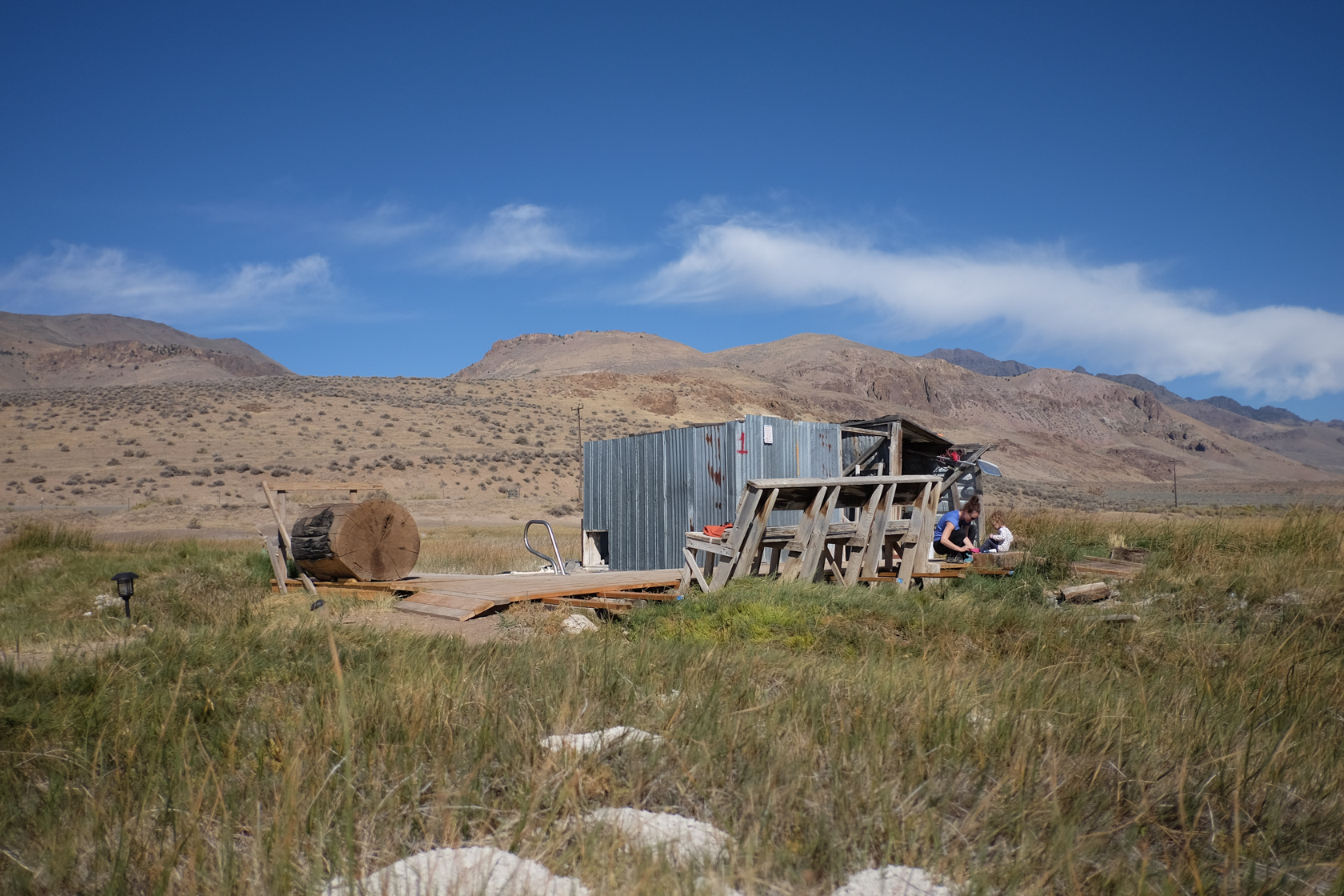 On our way north we stopped for a dip in the Alvord Hot Springs. The coolest one is about the temperature of a warm bath, which was perfect for Idara.