I only finished a handful of books this year. I’ve listed them below, along with a few thoughts that I took away. There were also a few children’s books that stuck out to me, and so I’ve listed those, too.

When it comes to politics in the United States, my default assumption is that things will revert to the mean. Electing Barack Obama may have been a huge step forward for progressives, but now there’s been a step back. And while the pendulum has swung toward Trumpism in the past two years, I expect it to swing back. So how can you tell if this time is different?

I suppose you can’t, at least not until it’s too late. Even so, I found this short book to be timely and thoughtful. It’s subtitled as “Twenty Lessons from the Twentieth Century.” Here are a few:

This book was clearly published as an answer to President Trump’s election, but it was not crazed or breathless. In fact, were it published at any other time I think its message and lessons would still hold. And for what it’s worth, the author is a historian who studies the Holocaust and 20th century Central and Eastern European history, so I think he knows a thing or two about tyranny.

While it is political in nature, I also found many of the lessons personally valuable, too. For example, being able to carry on small talk with strangers is a valuable life skill. It might even be one of the building blocks of civilization.

One thing that has really improved in my life in the past couple years is getting a handle on my relationship with technology. I waste much less time on my phone and computer now than I did before, and this book was an important part in that process. It’s based on a project that Zomorodi did for her old podcast, Note to Self, in which listeners (and now readers) are encouraged to try out a handful of challenges related to mobile phone use. I couldn’t find the list of them online, but here are the ones I remember:

For the past few months I’ve been riding the bus to Portland Community College a few days a week, and so the last one really stuck with me. Instead of messing around on my phone, I started to just look out the window. I even gave up reading while I was in transit. I found that I was much more mentally refreshed when I arrived at my destination, which was especially helpful at the end of a long day of school and study. This is also a rule that I broke regularly, and continue to break. But it’s something to shoot for.

If you feel like you struggle with your relationship with your phone, this is a good one to read.

I loved this book as a portrait of the United States at the beginning of the 1960s. Trailer homes, the beginning of automation (ice machines, etc.), racism in the South, being rich and acting poor in Texas, getting a spare tire in Oregon, being able to talk to anyone, anywhere. The line that sticks out to me the most:

“We’ve overcome every enemy but ourselves.”

Reality Is Not What It Seams

It took me a while to get into this one, but once I got past page 20 I read the rest in a couple evenings. Unlike a lot of popular science books I’ve read which cover the same ideas over and over, this actually had some new stuff for me.

The second big idea is that there appears to be no infinitesimally small region of space. In other words, just as matter has its indivisible building blocks (elementary particles), so too does space. Distance has a minimum.

I’m probably butchering these concepts, so do your own research before quoting them as fact.

This had been on my list for ages, and finally managed to read it. It’s about how to get things right, and it spoke to two key factors: being honest about the causes of your mistakes, and being diligent about not repeating them.

Two major industries that do this well are engineering and commercial aviation, both of which examine failures rigorously in order to figure out what went wrong. Gawande makes the case for integrating it into medicine and elsewhere. The point was that the world is simply too complicated now to be able to do things without checklists.

The Last Child in the Woods

This was among the most thought-provoking books I read this year. So much so that I gave it its own post.

Tribe: On Homecoming and Belonging

I came across this book via a friend who served in the army and completed several tours in Afghanistan. In just the first few paragraphs, it answered a question I’ve been asking myself since we returned to America from Qatar: Why did I feel like I was a part of something in a foreign place, only to return to my homeland and feel like an outsider?

The answer, Junger writes, is that we’re drawn together by hardship, be it war, or a natural disaster, or something else.

Of course, our experience in Qatar was nothing like war, and I don’t mean to draw a parallel. But it was often difficult, and in retrospect it makes sense that we forged such strong relationships while we were there.

I really loved this book. It was short and I was sad when I finished it. I wanted to keep reading about what draws people together, about why it’s so easy to feel alienated in America. But at some point you have to stop reading about a problem and start doing something about it.

The Design of Everyday Things

I’ve long been captivated by the cover of this book, which features a teapot with the handle and spout on the same side. I’m not a designer in the professional sense, but I don’t think you need to be one to take valuable insights away from the book. In a sense, everyone is a designer, since we’re all arranging our world for ourselves and others (Which drawer should the silverware go in? How should I set the table?). Thinking for a moment about how those arrangements are made, and how the resulting objects will be used, can make a big difference.

Like many high schoolers, I was given 1984 as assigned reading. I wished we’d been required to read Brave New World instead. The former imagines a dystopia in which the world’s population is oppressed through total surveillance, endless war, and ubiquitous propaganda. Brave New World, on the other hand, presents a world in which obedience is won by appealing to pleasure and detachment. Citizens are encouraged to use opiates and casual sex to achieve happiness. Instead of worshipping a political party and a demagogue, as in 1984, citizens worship pleasure and consumption and Henry Ford himself, father of mass production, mass consumption, and the assembly line.

Given these competing narratives of what a future dystopia might look like, I found Brave New World to be much more believable. After all, people want pleasure, so any economic or political system that can deliver it in return for obedience will be more likely to succeed.

Theory aside, I really loved this book. I was stunned by how predictive it was of the modern world, despite having been published in 1932. If you haven’t read it, you should.

Their Eyes Were Watching God

This novel follows the life and relationships of an African-American woman named Janie living in the Jim Crow South. This book is assigned reading for many high schoolers in the United States, but I came to it by chance.

I saw it recommended online for having beautiful prose, so I picked it up and started reading. I found the book difficult to read at first because of the vernacular it was written in. Here’s an example: “Oh, er, Pheoby, if youse ready to go, Ah could walk over dere wid you,” Mrs. Sumpkins volunteered. “It’s sort of duskin’ down dark. De booger man might ketch yuh.”

I got used to it after a while and found that the book did in fact have a wonderful flow. Here’s one of the lines I wrote down:

“Love is lak de sea. It’s uh movin’ thing, but still and all, it takes it’s shape from de shore it meets, and it’s different with every shore.”

Most of the books I read are written by people who are demographically just like me, so another thing I appreciated about this book is the fact that it offered a window into someone else’s world.

Before Idara was born I didn’t really have a sense for what a good children’s book was, or at least I didn’t care. Now I’m becoming increasingly opinionated (surprise, surprise). Here are a few I liked from the past year (and which I hope she chooses when it’s time to read a story before bed).

All of Baby, Nose to Toes

Idara is growing less and less interested in board books like this one, but she still chooses it every once in a while, and I’m so glad when she does. It has a wonderful rhythm and pretty drawings. Just try to read the page below without a tiny bit of joy sneaking into your heart. 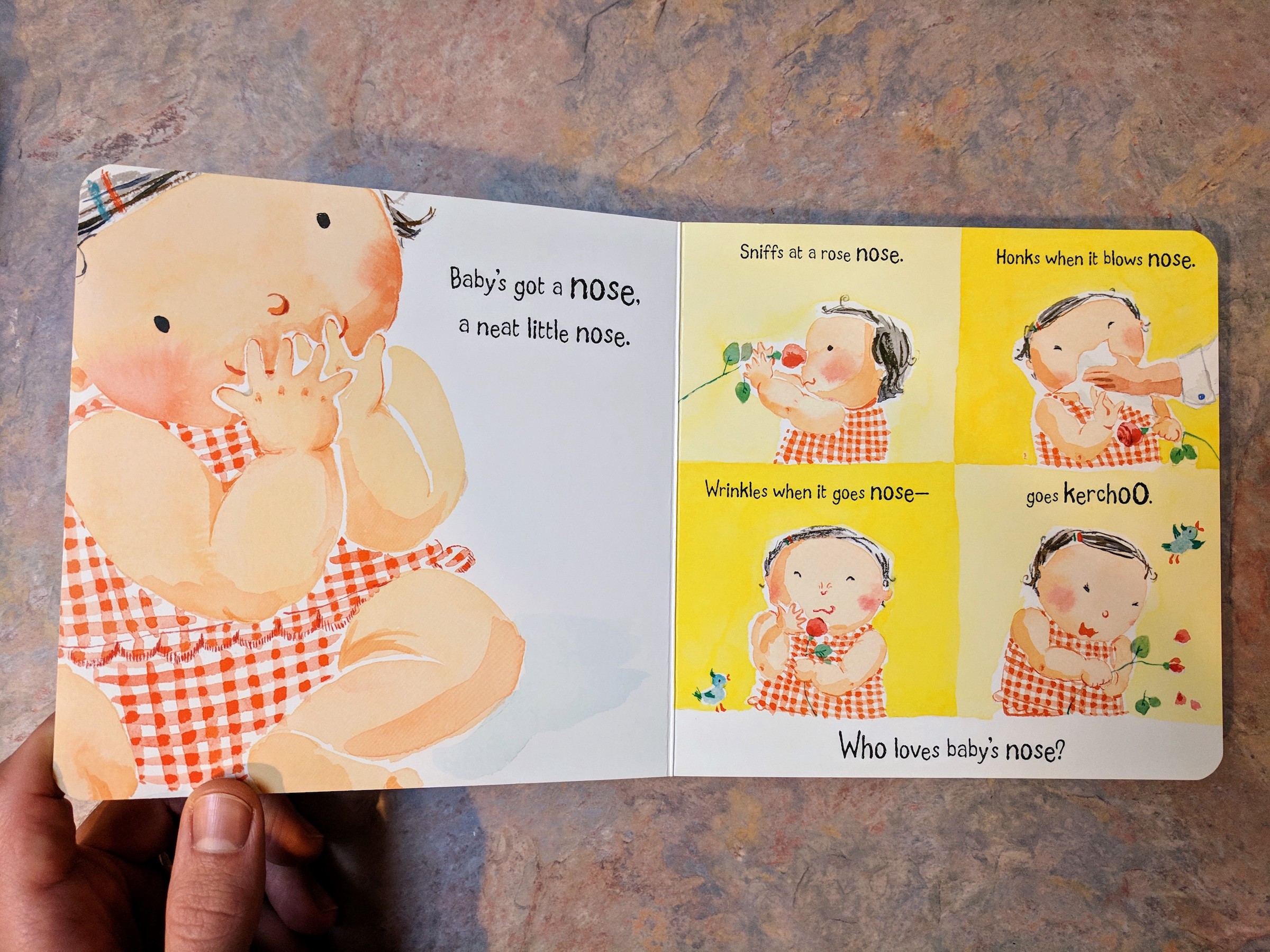 A page from All of Baby, Nose to Toes.

The Barefoot Book of Children

For the past few months Idara’s favorite type of book has been of the “how the world works” variety. This book, which focuses on how children live around the world (including here in America), is one of my favorites. 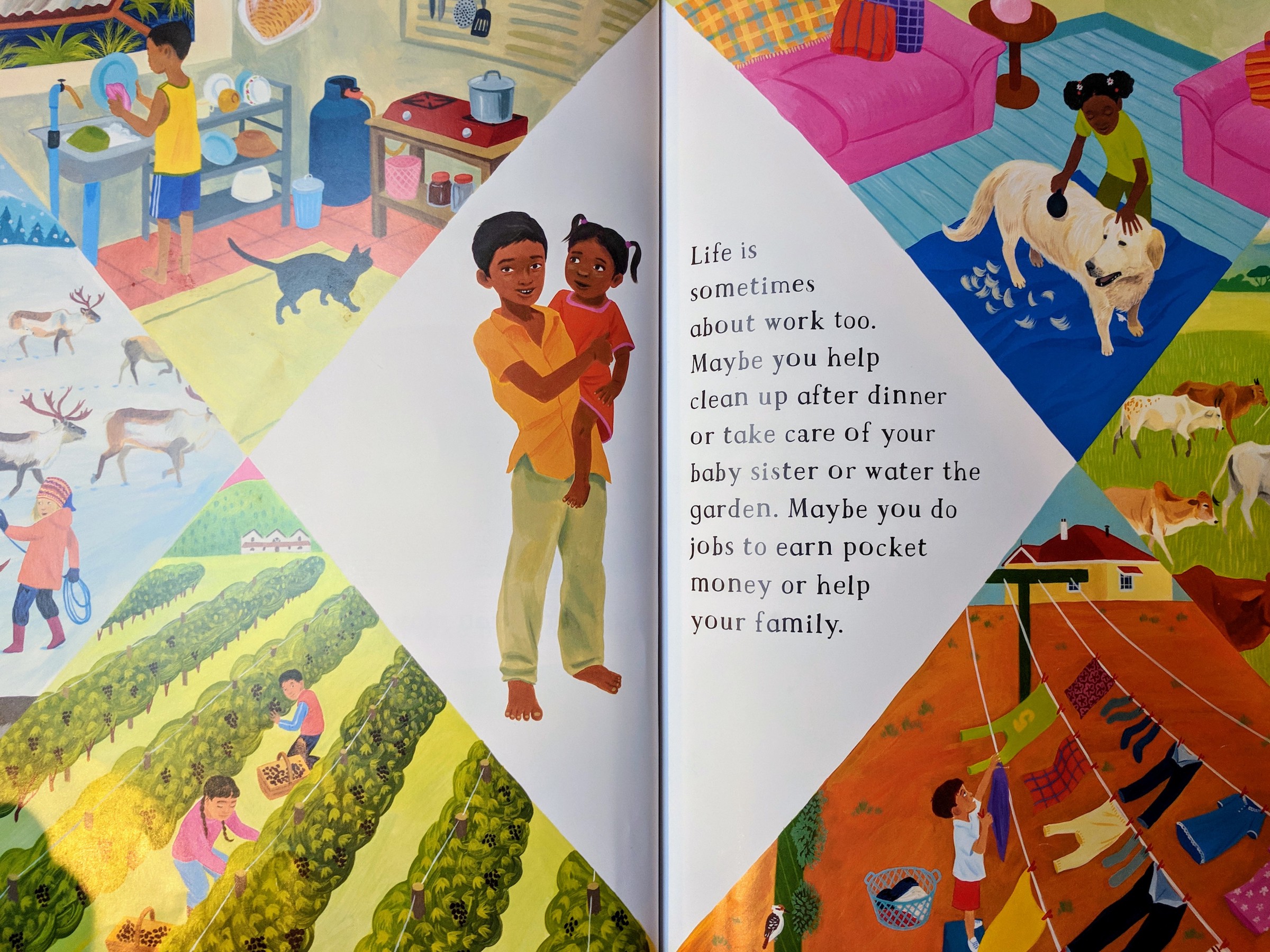 A page from The Barefoot Book of Children.

I remember thinking when I was little that there was America and then there was everywhere else. This book doesn’t try to show that everyone is the same – just that kids around the world (and adults, too!) have a lot in common.

This is a simple book, originally written in Japanese, about two children who venture into another world. Though the book lacks both meter and rhyme, it has a beautiful, haiku-like flow. Idara loves it, too, and often requests “Chirri and Choora” by name. 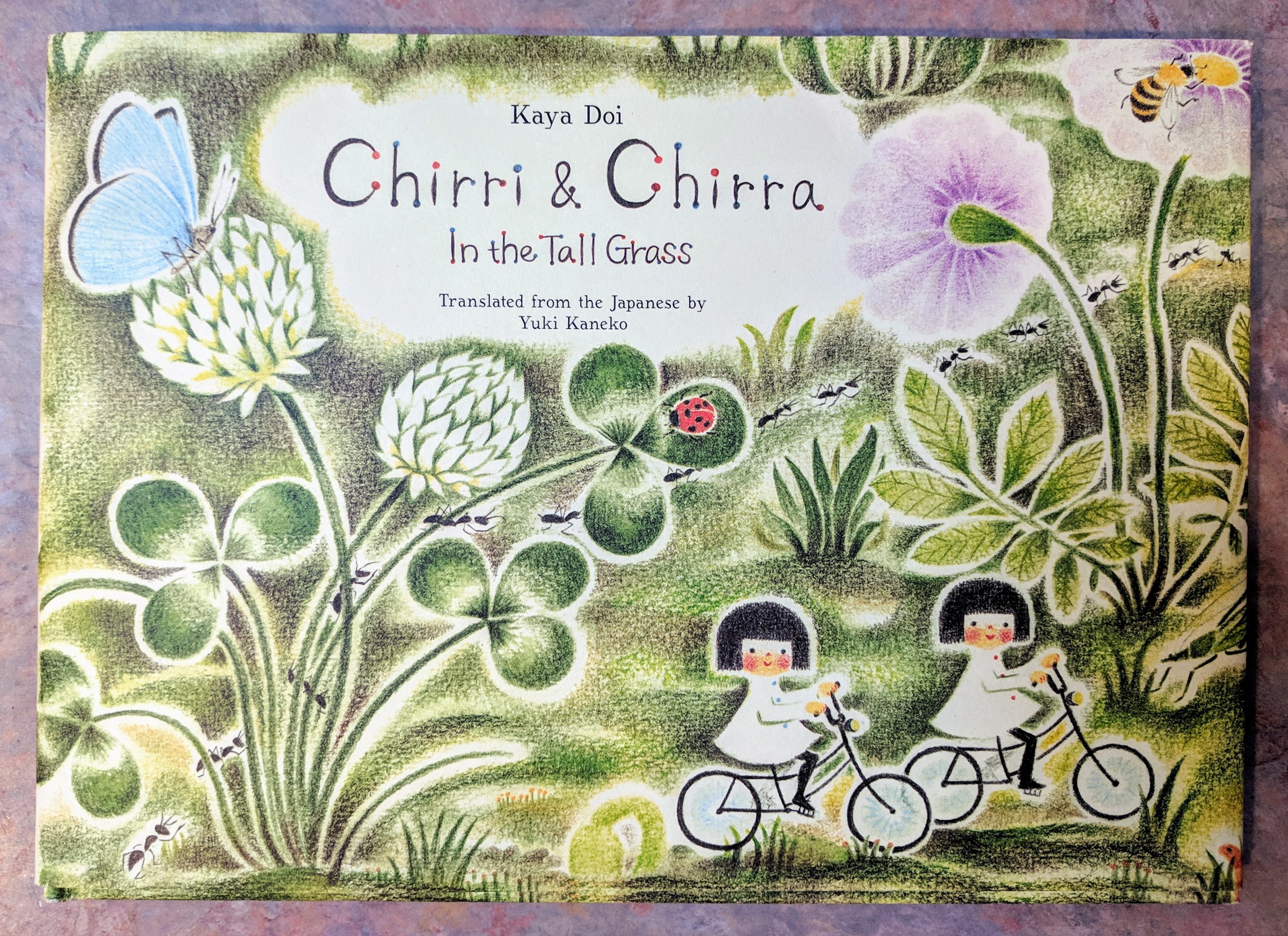