Rachael and Idara and I recently returned from Chiang Mai, Thailand, where we spent our first Christmas as a family of three. In comparison to other trips we’ve taken, we barely did anything at all. But since we were dragging along a 3 month old we experienced plenty of adventure. In fact, traveling with Idara brought with it so many new experiences and realizations that I’m not sure how I’ll be able to fit them into one post.

Before we’d even left on our trip I was already worrying about whether it was reckless to bring Idara along. Not because Thailand was unsafe, but because the trip would involve traveling without a carseat and in an area where there’s dengue fever. 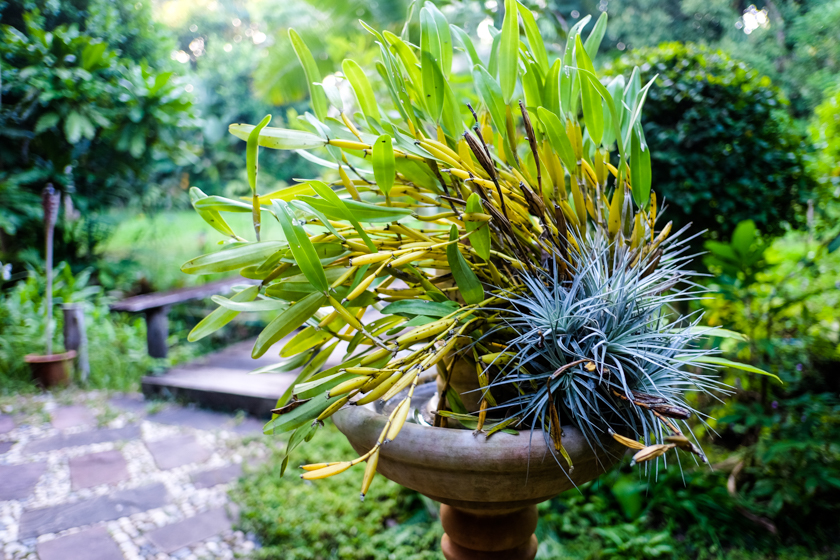 Rachael picked out a very beautiful and green place for us to stay. I particularly liked this arrangement.

First, the car seat problem: all my research indicated that bringing a car seat to Thailand was a fool’s errand because most cars lack the seat belt to strap them down with. Car travel wouldn’t be a big part of our trip anyway since we were only staying in one city. Contrary to my research, we found that every car we hired in Chiang Mai had seat belts. To do it over again, I’d definitely bring a carseat to Chiang Mai. It would be a hassle to drag along, but I think it’d be worth it. 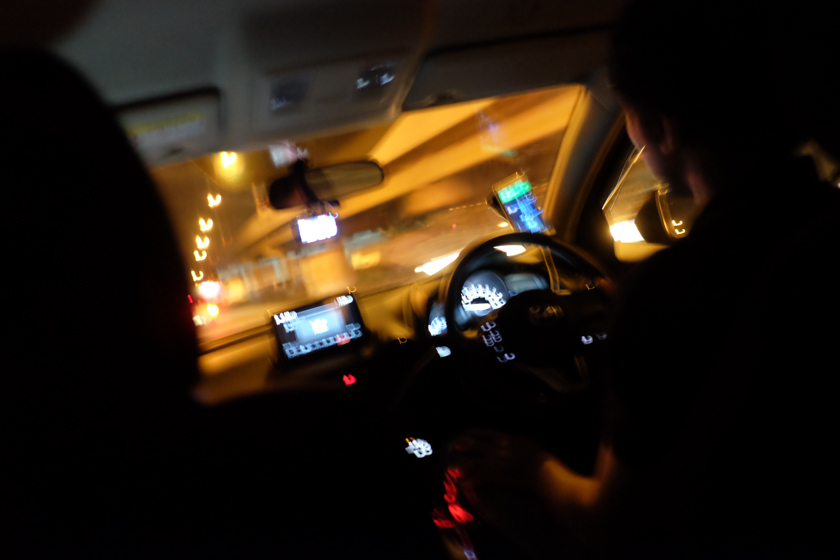 The most stressful part of the trip came on the way home from the night market in Chiang Mai. We were exhausted, Idara was exhausted. It was a classic case of too much, too much, and we (including the Uber driver) paid for it. Idara screamed and cried so much that we ended up pulling over at a gas station to rest.

As for the dengue, I didn’t think that the risk would be high enough to keep us from traveling there. It’s a relatively rare disease (not so different from lyme disease on the east coast of North America), especially in the dry season, and it’s not too difficult to keep mosquitos at bay. We stayed in a house with screens and a mosquito net for Idara’s crib, and we did our best to not leave Idara’s skin exposed when we were out and about. On top of all that, we used a lot of citronella mosquito repellent. The diaper bag still reeks of it. 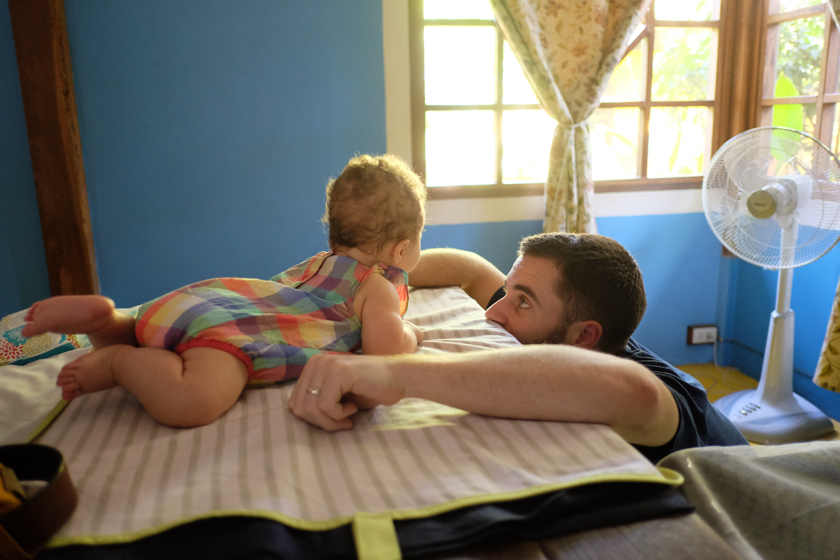 The place we stayed had everything we could’ve asked for to make traveling with a baby as easy as possible: fans, screened in windows, and a crib with a mosquito net.

I’m sure some people would find my explanations unconvincing and judge Rachael and I for deciding to travel with Idara. That’s fine. My only response would be that not traveling is risky, too, and we simply feel like the benefits of exposing her to other people and places outweigh the small risk of something going wrong.

One of my favorite things about travel is that it provides an opportunity to test and perfect my travel systems. For example, I’m on an endless quest to achieve the perfect packing list. This trip, for which I brought less than nine pounds worth of luggage, set a new record. In a sentence, I brought a camera, a cell phone, a kindle, some basic toiletries, and a change of clothes. And don’t worry, the irony of trying to travel light while also deciding to have a child is not lost on me. Thankfully Idara doesn’t require much more than a few outfits, some diapers, and a backpack to carry her in.

Rachael also opted to bring her Boppy breastfeeding pillow. I was skeptical that it would be worth the weight and bulk, but she was right. (DID YOU HEAR THAT HONEY?) Not only did it facilitate breastfeeding, it also made a nice platform to lay Idara down on our lap during our long flights between Doha and Bangkok.

Each day’s main activity was hanging out with Idara on the bed and seeing what new tricks she could come up with.

When Idara was only a few weeks old she was giving us a dirty diaper to change every three or four hours. Now she can go that many days without pooping, which makes most diaper changes much less onerous. Except, of course, when one of those rare poops comes at 40,000 feet, when you’re sitting in the window seat, with the guy in the aisle seat sound asleep. We decided to just change her in the seat, which I admit is probably a major parenting faux pas. If it isn’t, it should be. Still, if there wasn’t a changing table easily accessible (which is often the case), we just changed her wherever we were.

When I’m traveling I often think of something Rachael’s grandpa Gil, who recently passed away, emailed me after reading this post about a trip we took we to Jordan. He said: “You find interesting and good people everywhere.”

We met a few of those interesting and good people in Chiang Mai. Rachael and her mom had left Gordy, me, and Idara at a restaurant while they went out to look for a store Rachael had read about online. Our job was to order some food to take back to the house for dinner. All was going well until Idara started to fuss, so I picked her up and started walking around the restaurant to calm her down. After a few minutes one of the waitresses came over to me and asked how old she was. I replied and asked about her kids. Then she asked to hold Idara. For a split second, I paused. What was worse? Handing the most fragile and important part of my world to someone who I’ve known for thirty seconds? Or being so protective of Idara that I never show her that Gil was right, that there are good people everywhere.

Within a few minutes she was showing Idara off to the rest of the staff. When Rachael and her mom returned they started chatting up one of the waitresses who had a daughter around Idara’s age. She had a hard time breastfeeding, the waitress said, just like Idara. And now that she was working again, she found that her daughter wasn’t too keen on taking a bottle of expressed milk, just like Idara. Powdered formula was out of the question, she said, because the tap water in Chiang Mai is not potable, and bottled water is too expensive. I’d never thought about that, but apparently pushing baby formula in countries without clean water has caused huge problems in the past, and was the root of a major boycott of Nestlé in the ’70s and ’80s.

Our first real trip with Idara came with some major training wheels: Thailand was easy to travel in, we didn’t move around a lot, and we had Gordy and Suellen to help out every step of the way. And at 3 months old Idara had more or less figured out breastfeeding but hadn’t yet become a pain to put down for naps, as she is now. 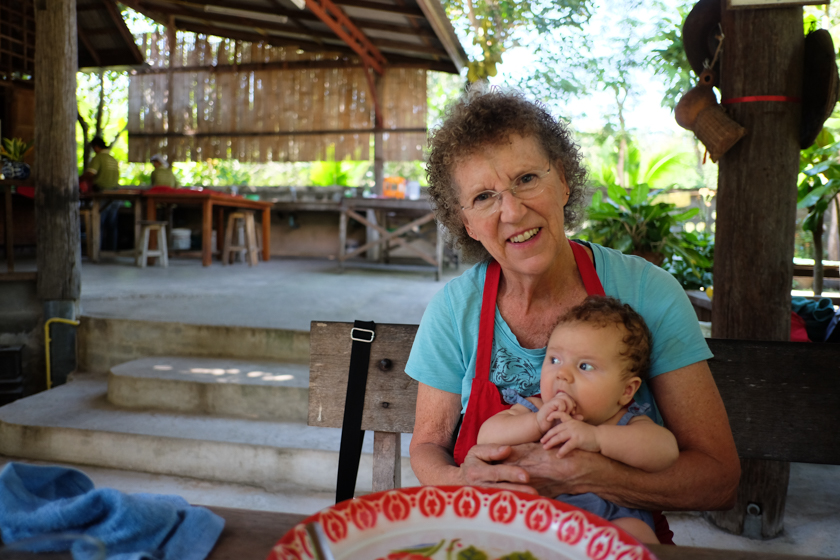 We went to a cooking class in the countryside otuside of Chiang Mai. We booked three spots for the four of us and then rotated as babysitter. Here’s Suellen taking her turn.

My goal going into the trip was that we’d still want to travel with her again after it was over. Mission accomplished.