This is the fourth post in a five part series about how and why Rachael and I ended up delaying our return to Qatar. Click here for the next (and last) post, or click here to go back to the first post.

Late Tuesday night, Rachael noticed more fluid. Not a gush of water onto the floor, like in the movies, but enough to tell the doctor about. He ran a test and looked at it under a microscope and confirmed our suspicions: Rachael’s water had broken. As we’d learned through the master class of staying at a hospital for the better part of a week and talking to doctors and nurses all day long, this set the delivery clock ticking. Once the water has broken they try to deliver babies within 24 hours to minimize the risk of infection.

Dr. Baker said that as long as there wasn’t any progression of dilation or contractions through the night, the doctors would break her water fully (currently it appeared to be just a small leak) in the morning. Hopefully that would start her labor going again.

Shortly after breakfast the team of residents and attending physicians and nurses assembled in our room. There wasn’t much fanfare to the water breaking — all it took was a little piece of plastic that looked like a crochet hook. This was supposed to move the baby closer to her cervix which would, theoretically, cause more contractions and dilation.

Except it didn’t. We waited for a few hours but the contractions still didn’t return to the strength they’d been at on our first day. So we ordered lunch and continued waiting. 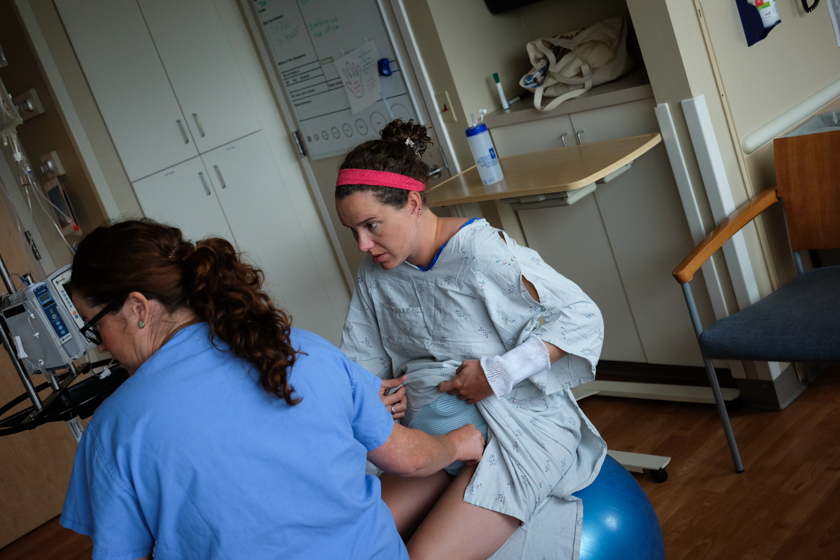 Rachael hanging out on the yoga ball after having her water broken.

After it became clear that breaking Rachael’s water wouldn’t move things along as quickly as they’d hoped, the doctors recommended starting an IV drip of oxytocin, which speeds up contractions. Dr. Hayes, our family doctor, had warned us earlier that one of the downsides of oxytocin is that it can make the intensity of contractions escalate very quickly, like slamming the accelerator to the floor as soon as the light turns green. She was right.

Rachael and I were sitting in the delivery room talking when she paused right in the middle of a sentence and grabbed her belly. I glanced over at the contraction monitor and found a steep rise from the baseline all the way up and off the chart. As soon as Rachael wailed in pain I told her I was going to go get a nurse. Just as her contractions were ramping up again, so was my heart rate and the knots in my stomach.

Our two nurses, Megan and Deb, walked in calmly and began to set out the materials they and the doctors would need for the birth. Rachael moved back to the hospital bed and I sat at the edge, putting my hand on her arm or her leg in hopes of comforting her but knowing full well that I was only trying to comfort myself. She was holding herself together just fine, considering the circumstances.

Several days later, after all of this was over, Rachael would tell me that she couldn’t really remember the delivery itself. Adaptive, of course, for a mother to forget the pain and intensity and anxiety of childbirth so that she can go onto have more children. What surprises me now, writing about this a couple weeks after the fact, is that my memory is fading, too. I remember the moments leading up, and the moments after, but I’ve mostly forgotten what happened in between. They exist in my memory as blurry snapshots colored by one emotion: fear.

There was the sound of the fetal heart rate monitor, whose beeps became slower and slower with each push. My legs, shivering and shaking randomly so badly that I could feel them shaking Rachael, too. The comment from Dr. Hayes that we may need to think about an “assisted delivery.” The nurses shifting Rachael from side to side because they were worried that the baby wasn’t getting enough blood. The request for scissors to snip the umbilical cord, wrapped around the baby’s neck. Whispering into Rachael’s ear the commands the nurses told me to give her, to push and hold it for ten seconds, nine seconds, eight seconds, seven. But only at a whisper because if I tried to go louder my voice would break.

And then, ninety minutes after I went to get the nurse, six days after we’d checked into the hospital, and thirty-six weeks since this all began, there it was. Hoisted into the air by Dr. Goss, soaking wet and blue and red and chalky white, umbilical cord dangling, arms flailing, mouth wide open and letting out a tremendous scream. 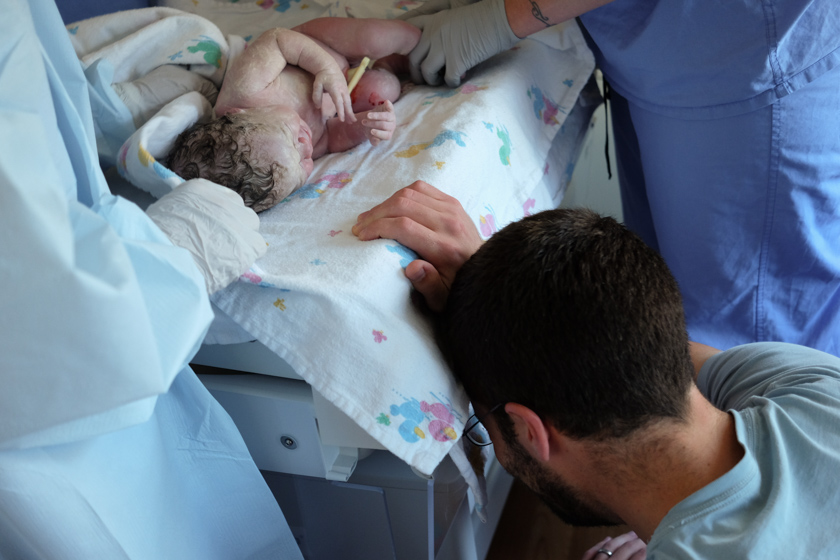 One of the nurses grabbed my camera and did an excellent job documenting my complete emotional breakdown. I was crouched down because I literally felt weak in the knees.

Our child cried, and I cried. Tears of joy, of course, but mostly I cried because there was nothing else I could do. Spending nearly a week in a hospital worrying about my wife and our baby had taken every ounce of self-control that I had. Now that they were gone, the raw feeling came flowing out. As I knelt down and laid my head on Rachael’s hospital bed, Dr. Hayes touched my back and said, “Looks like you had a little bit of pent up emotion.” To say the least. 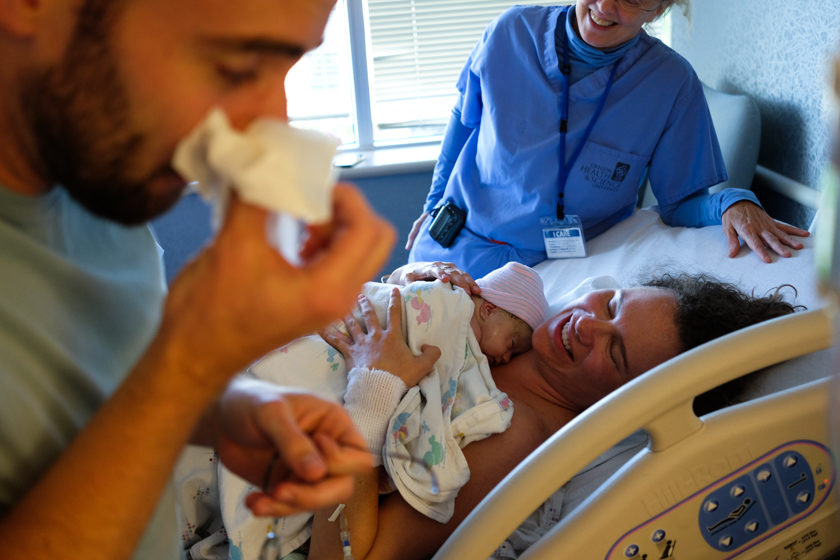 This was my favorite picture of all. Dr. Hayes and Rachael smiling, me trying to pull it together, and our daughter, barely ten minutes old.

Right after the baby was born Dr. Goss took it across the room to a heated table where a team of neonatal doctors checked its heart rate and breathing and made sure it wouldn’t need any special intervention.

The fetus we’d taken to calling “Fish,” and “Space,” was actually a little girl. Seven pounds and two ounces with a full head of curly hair, just as we’d seen on the ultrasound.

A few moments later and she was back with Rachael, and I was again by her side, all three of us, together. 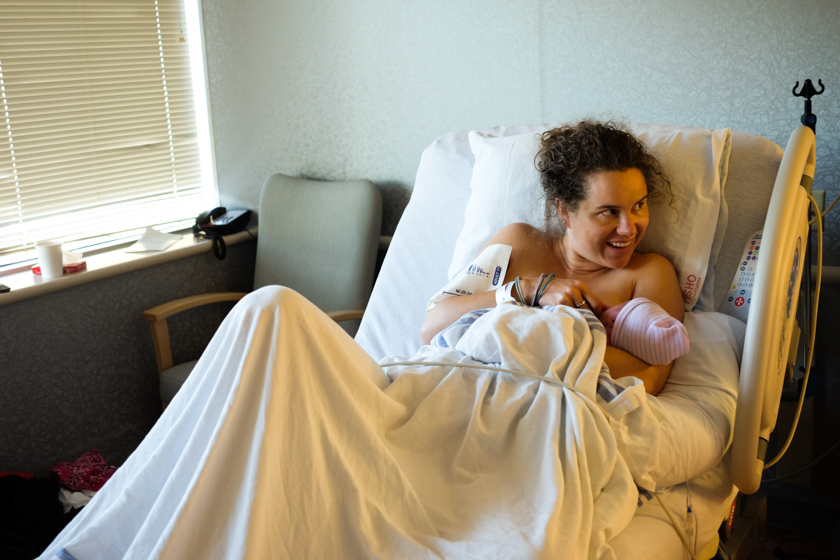