As our time in Qatar drew to a close Rachael and I tried to see and do as many things as possible that had always been on our list. I started this post almost a year ago and am only now wrapping it up. Anyway, here are a few highlights:

I thought camel races in Qatar might be similar to horse races back home, but the two sports couldn’t be more different. Instead of watching the race from a grandstand, you drive alongside the camels and watch out the window of your car. And it makes sense, too, since the track is several miles long. A complicating factor is that there are at least a hundred other cars driving alongside you, some carrying camel owners and trainers, shouting at their camels, and others carrying spectators. 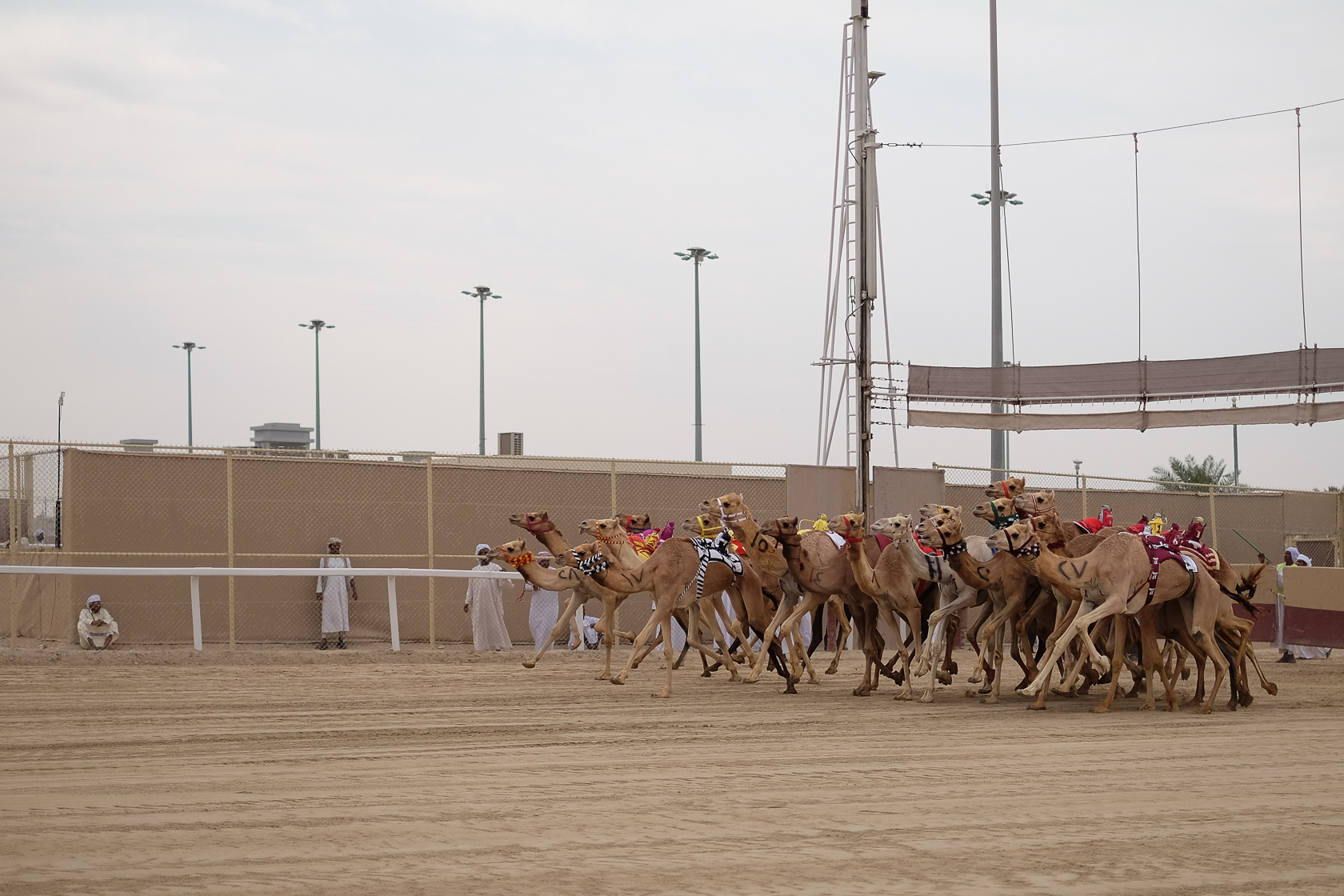 The start of one of the camel races. Note the absence of human jockeys.

The camels were once ridden by jockeys (who were sometimes child victims of trafficking for this purpose), but nowadays the camels wear saddles affixed with “robots” controlled by a trainer’s remote. The robot isn’t really much of a robot, though, just a speaker and a cordless drill with a whip attached. This video from the BBC does an excellent job of capturing it.

Ramadan has fallen during the final weeks of the school year ever since we moved to Qatar. The holy month brings several changes, most notably the practice of fasting from sunrise to sunset. Rachael and I never fasted, but we still joined our colleagues for iftar, the meal just after sunset when the day’s fast is broken. For many people this is a family affair, but there are also large gatherings at public spaces and hotels and restaurants (even Chili’s hosts their own iftar). We went to one at the Shangri-La Hotel in downtown Doha along with about hundred staff from our school and a few hundred other people. It’s all set up buffet style with different foods from Lebanon, Japan, India, and the Gulf.

It is ironic, I think, to follow fasting (which is prescribed, in part, to make one aware of the plight of those in need) with a big meal at a fancy hotel. But then again, contradictions are everywhere if you know where to look.

As soon as we decided that this would be our last year in Qatar I got in touch with a couple close friends and told them if they wanted to visit now was the time. Both work in the airline industry which makes international travel at the drop of a hat easier and more affordable. Tim visited for a few days in April and David came in May right as Ramadan was starting.

We didn’t expect many visitors when we first moved here, so each one has felt very special. Not only do we feel special to have people travel halfway around the planet to visit us, but it also gives us a chance to show them a culture that’s often maligned in the United States.

While Tim was here my friend Jake received a wedding invitation from one of his students. This was the first such invitation either of us had ever received, and so the fact that it coincided with Tim’s visit was especially lucky. 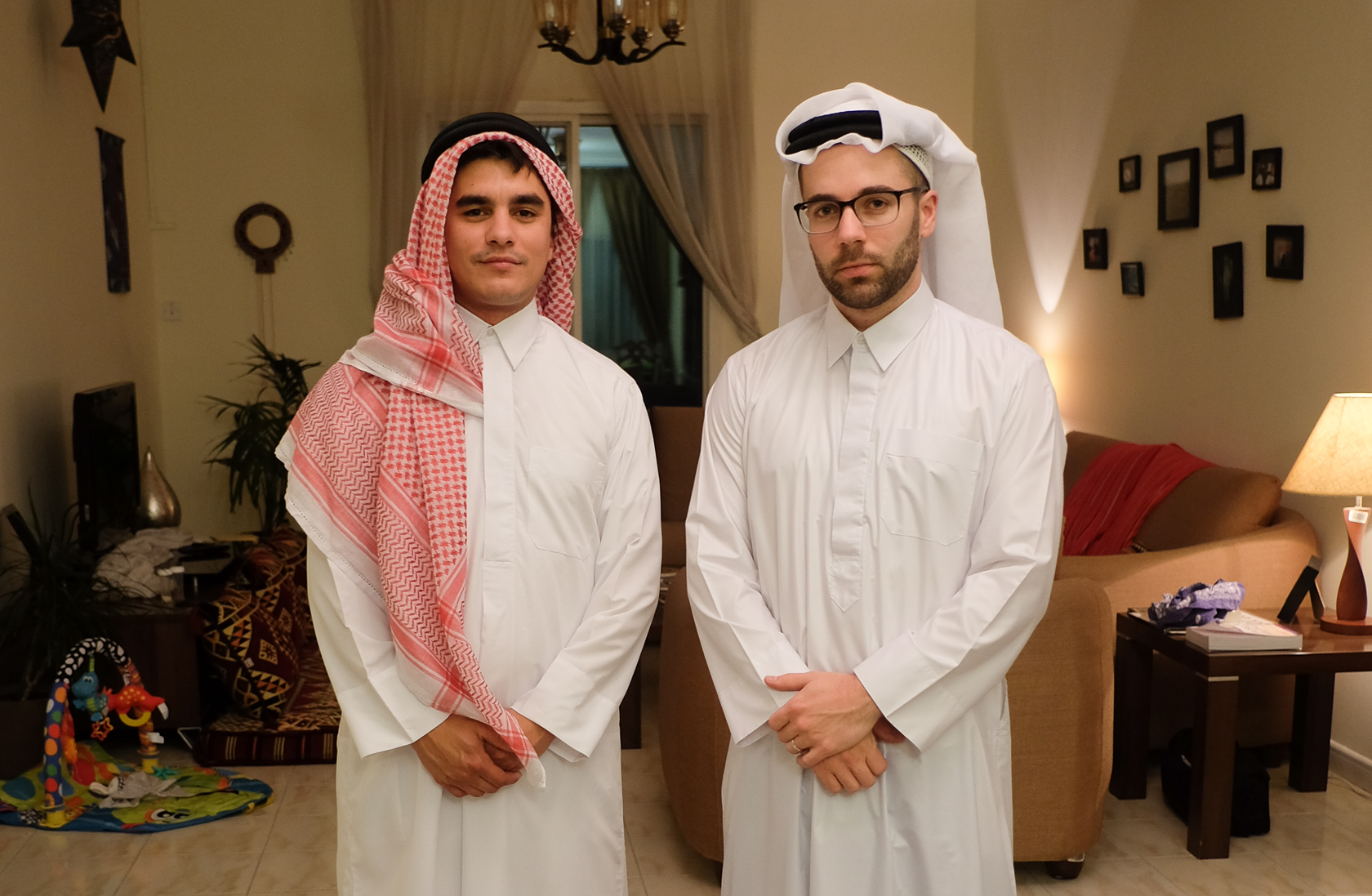 Tim and me before heading out to the wedding.

The three of us donned thobes late one Friday night and headed out to an empty lot on the edge of town. The student had directed us to show up at 6 or 7 p.m. Knowing the culture, we opted for 7, and then ended up waiting another hour for the festivities to start.

We quickly learned that the event we’d been invited to would be more aptly described as a wedding reception rather than a wedding ceremony. There was no bride, nor were there any women at all. The wedding ceremony itself, where both the bride and groom are present, will come later. In fact, we heard that the groom hadn’t met his bride yet, though apparently he “knew who she was.”

The event was held inside a giant, fancy tent complete with air conditioners, chandeliers, and carpeted floors. There were about a couple hundred men and a few boys inside. We greeted the groom as we entered and posed for a picture with him, and then our host showed us to one of the chairs that lined the walls of the tent.

We spent the rest of the night talking with the handful of people in attendance who spoke English, eating dates and drinking tea, and dancing. The dancing was sort of like line dancing, except with no women, and with the men breaking off periodically to dance alone in the middle of the floor. A man we’d met earlier in the evening invited me into the middle to partake in one of these solo dances, and since I knew that this opportunity would never again present itself, I accepted. I didn’t know the proper steps, though, so I’m sure that I just made an ass of myself.

At one point, later in the night, we noticed the guests filing into a smaller tent nearby. We followed along, stopping first at a bank of a dozen sinks where everyone was washing up, apparently in preparation for a meal. Inside the tent the food was served on giant metal platters and set on the floor. Eight or so people sat down around each platter and proceeded to eat with their hands. Jake, Tim, and I followed suit, doing our best to scoop the rice and goat meat into our mouths. You might think that eating with your hands is second nature, but I actually found it difficult, like using chopsticks for the first time.

After we sat and ate for ten minutes or so I started to notice people getting up and leaving the tent. At the same time, other people were coming in, but they weren’t wearing thobes and goutras. In fact, many of them were wearing construction uniforms or clothes that were tattered or dirty. I asked our host about this and he said that it’s customary to open up the meal to anyone after the invited guests have eaten. Qatar and the other Gulf nations get a lot of bad press about how they treat their poor (and rightly so), but as is often the case, sometimes the complete story is more complicated.

Many of the Muslim countries we’ve visited have state mosques which are designed to showcase the power and wealth of the country, not unlike the great cathedrals of Europe in their day. Particularly impressive are the Hassan II Mosque in Morocco and the Sultan Qaboos Grand Mosque in Oman. Many of these mosques are free and open to visitors on any day except Friday, but Qatar’s Imam Muhammad ibn Abd al-Wahhab Mosque was a bit more restrictive. Anyway, David and I managed a visit in April. In comparison to other state mosques I’ve seen Qatar was simple and understated. I liked it. 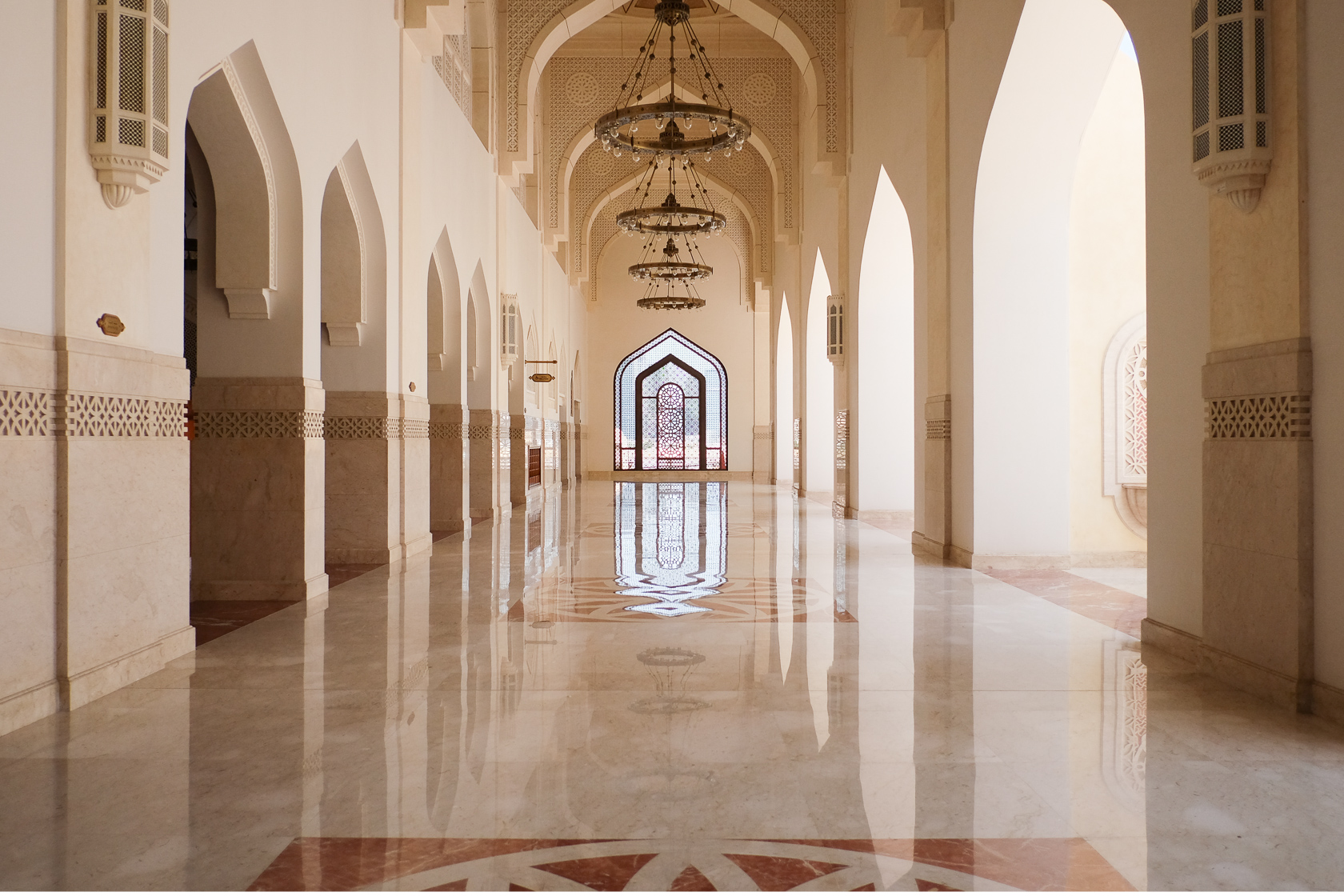 Compared with other state mosques I’ve visited, this one was simple and understated, which is a rare attribute in Qatar.