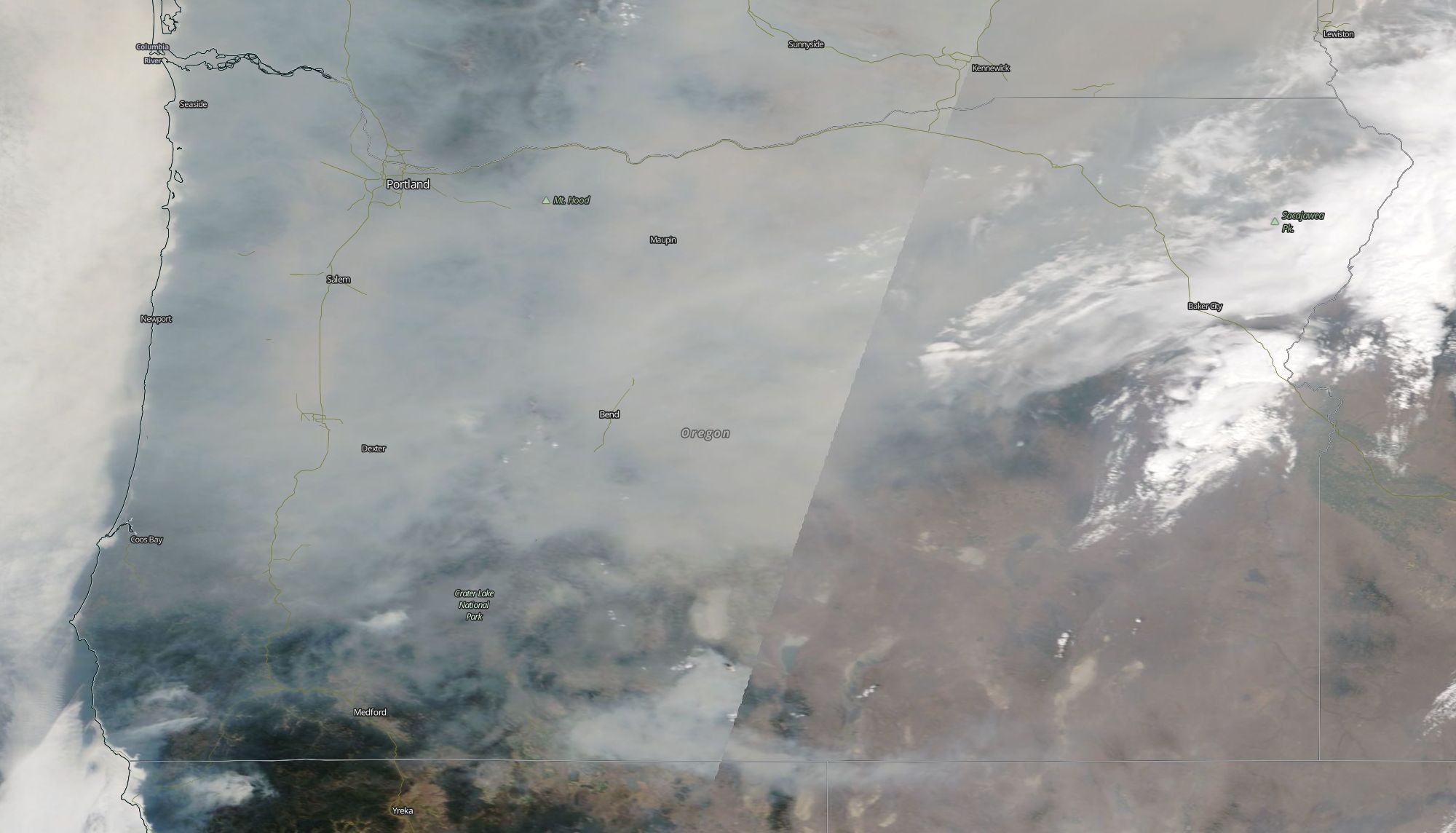 When smoke started to descend on White Salmon1 a few weeks ago, I couldn’t help but wonder where it was coming from. There weren’t any fires burning nearby, but there were several burning in Washington, Southern Oregon, and Northern California. So which fire was supplying the smoke?

After a bit of research, I came across NASA’s WorldView project, which is a lot like Google Maps, except that instead of looking at maps you can see pictures taken by NASA’s satellites. One of those satellites in particular is Terra, which captures every point on earth every day. Those pictures are regularly uploaded to the WorldView website, so within about three hours you can see exactly what Terra saw from 430 miles up.

Perhaps the coolest part about Terra is that the data goes back over 18 years. Here’s the view over Manhattan on September 11, and the view over Portland during the snowstorm of 2008, and the view over the Arabian Peninsula during one of the worst dust storms in a generation, which I wrote about here. 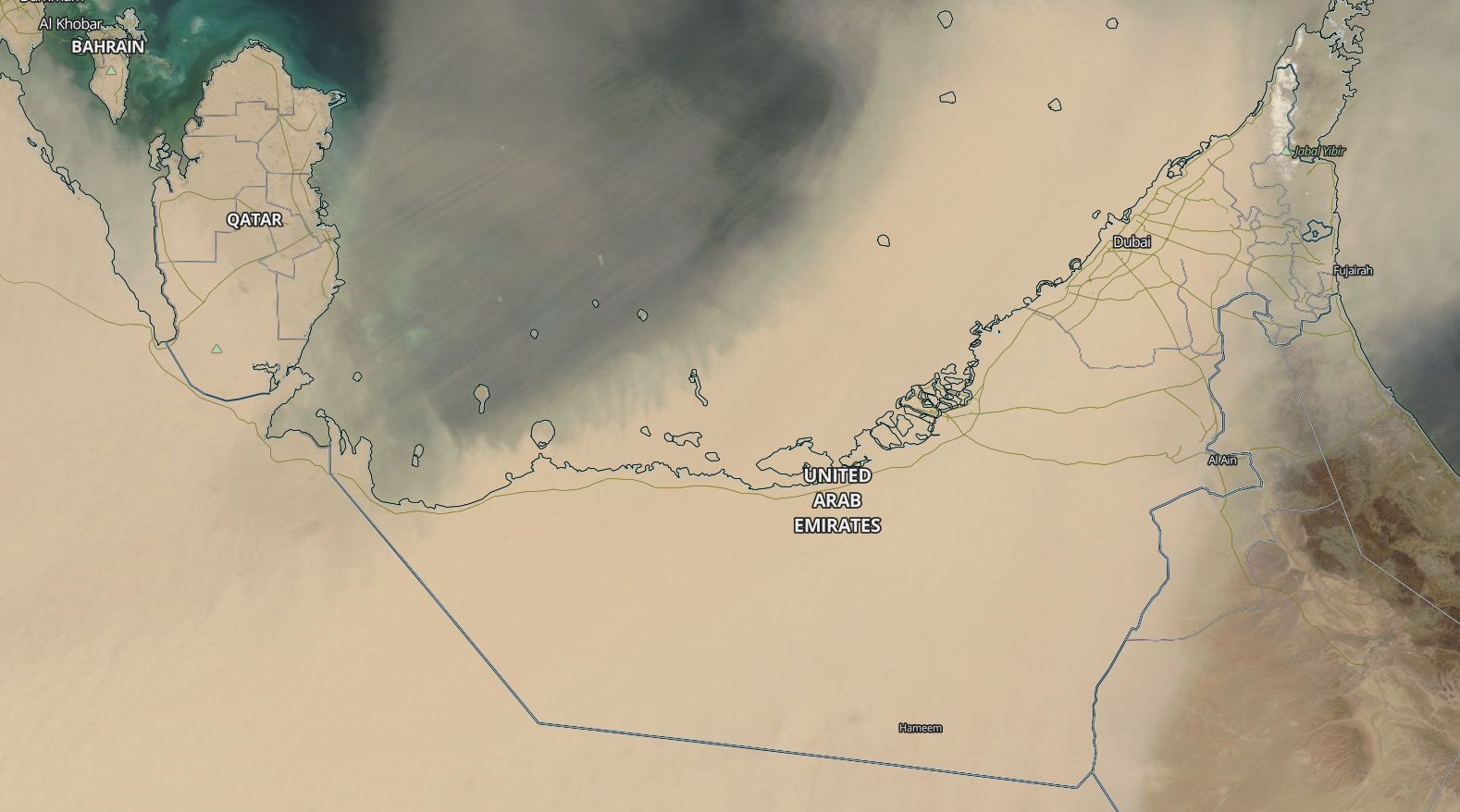 This storm blew dust down from Iraq, across Saudi Arabia, and then over Qatar and the United Arab Emirates. A meteorologist I spoke to about it said it was the worst recorded dust storm in 30 years.

Anyway, back to the wildfires. If you look at the image below it’s pretty easy to trace the smoke over the Willamette Valley and Columbia Gorge to the fires in Southern Oregon and Northern California. That said, there are lots of fires around (including many in Washington and British Columbia) and the wind is moving all the time. I’ve been checking WorldView every day for the past three weeks or so, and some days it looks like the smoke is coming from the northeast and sometimes it looks like it’s coming from the south. Either way, it’s a drag. 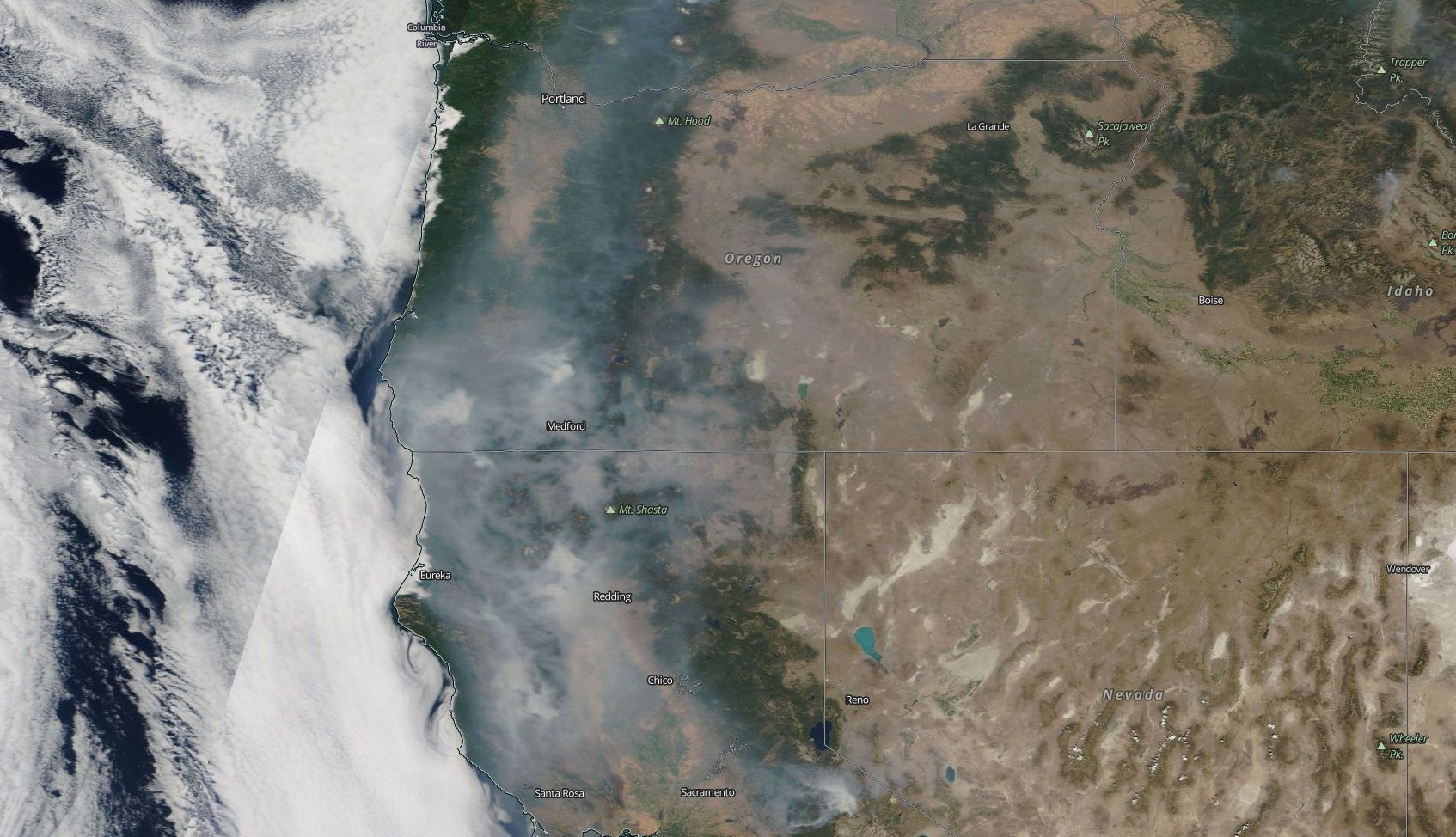 Wildfire smoke over the Pacific Northwest on August 9, 2018.

If you’re curious about tracking the fires themselves, InciWeb is a great resource. It lists every fire currently burning across the West, how it was thought to have started, what resources are being used to fight it, and how contained it is.

On a related note, I’ve heard many people this summer describe the heat and fires as part of a “new normal,” as if there’s nothing that can be done to prevent wildfires or one of their main progenitors, global warming. But that’s not true. Forest fires may be a natural part of forest ecology, but many of those currently burning were started by humans.

As for global warming, one of the most important things individual people can do is advocate for a putting a price on carbon pollution. Cigarette taxes keep people from smoking, and carbon taxes will keep companies from polluting. Turning off the lights when you leave the room will help, too, but the challenge is too great to be solved by individuals’ good intentions. We need big solutions, and big solutions will require us to work together in the form of local, state, and national governments.