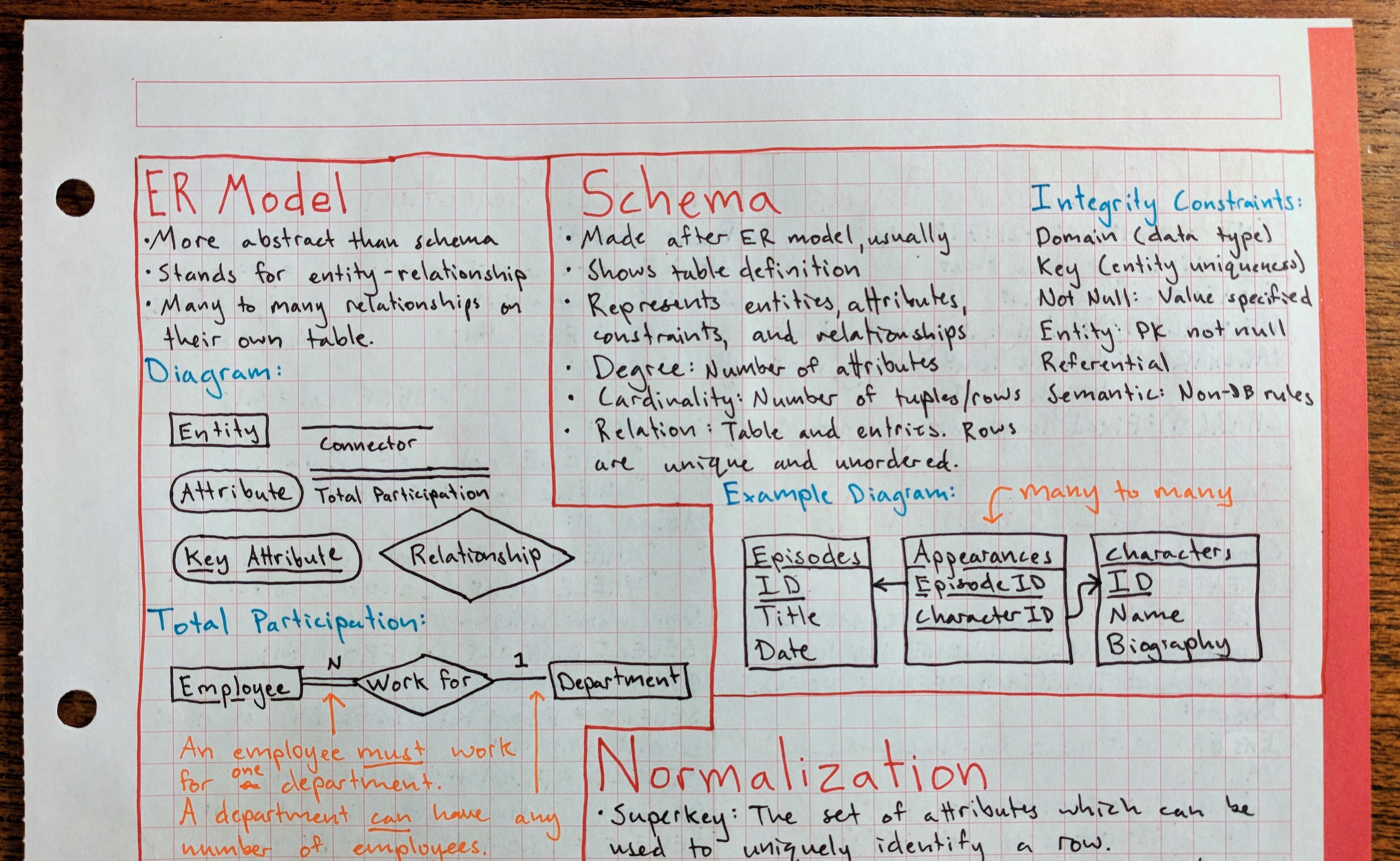 Part of the note sheet that I used for the final.

This fall I took two courses: Web Development and Databases. This post summarizes my experiences with the latter, and offers some advice for people taking the class in the future.

I had some downtime after summer term so I used it to prepare for the classes I took over fall term: databases and web development. For databases, I took this excellent Udemy course by Colt Steele. While it won’t prepare you for the conceptual side of CS 340, it’ll go a long way in getting you comfortable with creating, reading, updating, and deleting data with MySQL. Just make sure you don’t pay full price for it — it goes on sale a lot.

With the exception of the final project, this course didn’t involve much programming. When I did need to code, I spent most of my time in Sublime Text 3. Occasionally I’d use Cloud9 because I found the interface simpler than phpMyAdmin (to use MySQL, create a new HTML5 workspace and then from the terminal type mysql-ctl cli – this sets up a command-line interface for MySQL through which you can create and use databases).

When I needed files from FLIP I’d download them with Cyberduck. This was especially useful for the final project, when I was constantly downloading files, changing them, and then re-uploading.

It was easy enough to run my Node apps on Oregon State’s FLIP server, so I never ran them locally, although I did install Node so that I could run simple JavaScript apps from my command-line.

Here are some commands I found to be helpful when setting up and running Node servers on FLIP.

Start a forever process to run a Node server continuously:

None of the assignments were particularly difficult, though the final project did take up a fair bit of time. Here are a few examples of tasks we had to complete for assignments:

The final project required creating a database that modeled something with a variety of tables. The database was required to have C.R.U.D. functionality: it had to be possible to create, read, update, and delete data. My groupmate and I chose to model the Game of Thrones universe, with tables representing characters, houses, appearances, locations, and episodes. Styling wasn’t necessary, but I had gained some experience with the Bulma CSS library in my web development class and so we used it to make our website a bit prettier. You can see the final product here (after connecting to Oregon State’s network via VPN), at least until they delete it.

A screen-capture of my final project.

There were six quizzes, but they were unproctored, open-note, and could be taken as many times as necessary, so it’s probably more accurate to describe these as assignments.

This class had a final and no midterms. The final was somewhat difficult but I had done well on all of my assignments so I wasn’t too worried about acing it. We were allowed a hand-written sheet of notes, which was useful.

Another thing that helped on the exam was creating a few flashcards for each week of the course and reviewing them every day. It only takes a few minutes but goes a long way in helping me remember things. I use an app called Anki.

This course was straightforward and not particularly difficult. I spent 86 hours on the course over the entire semester, including the Udemy course I took at the beginning of the term. That works out to a little under nine hours per week. If I had decided against doing the Udemy course and had done the bare minimum for my final project, I probably could’ve gotten this down to about 60 hours or so.

You won’t find me creating and maintaining databases in my spare time, but one thing that I came to enjoy about this course is that it’s specifically oriented toward solving problems. I don’t mean problems in the general sense, I mean small, discrete problems like “Given a database which represents a video rental store, find the most and least popular dramas.” That’s not the whole class, obviously, but it’s still fun.

I also enjoyed completing the final project, in large part because I had a good working relationship with my partner. I felt like we created a good product together.

The course wasn’t quite as well-organized as others I’ve taken from Oregon State (CS 271, CS 290) but it wasn’t the worst, either.