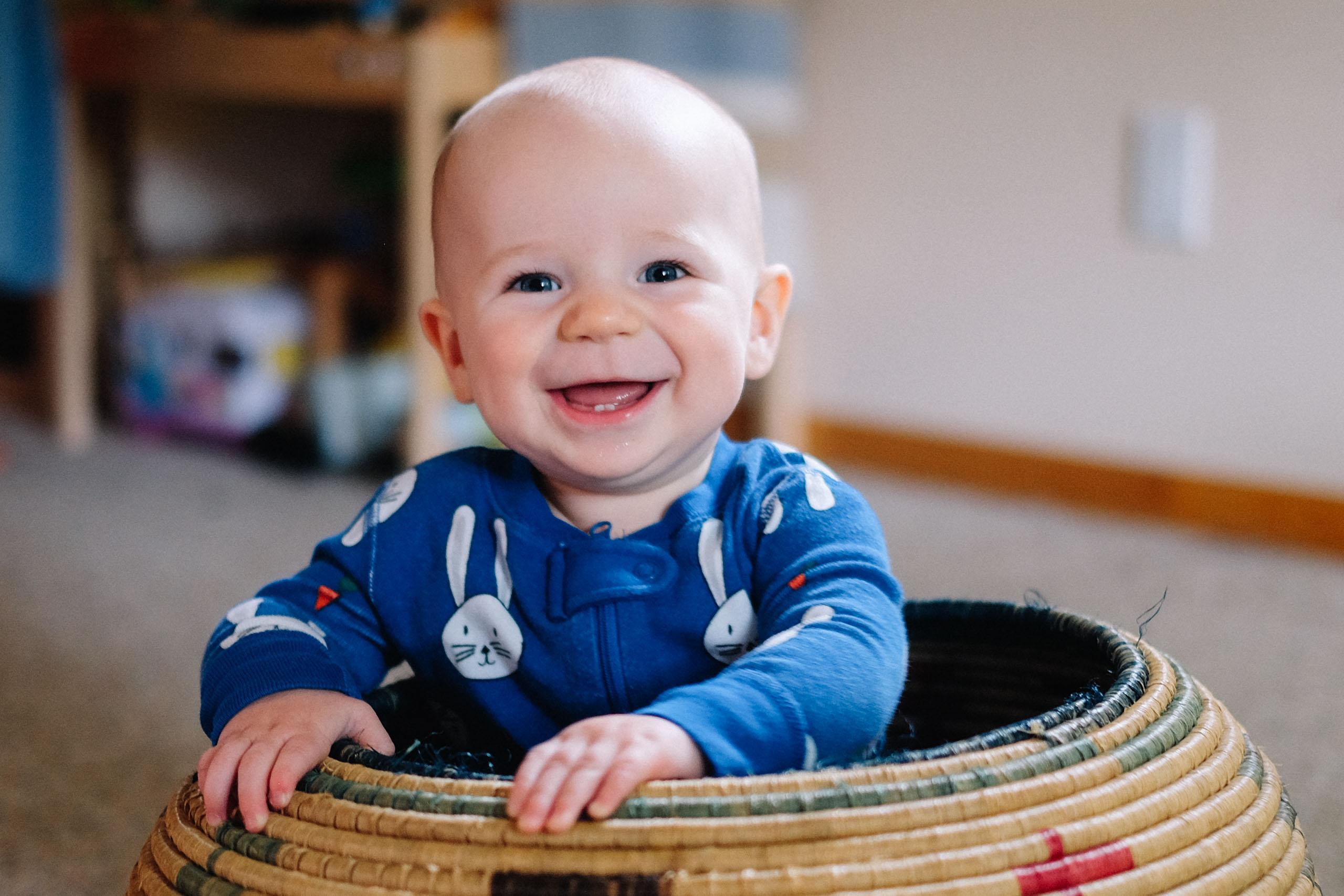 Anyone who has ever held an infant has surely noticed its fontanelle, that pulsing soft spot atop their head where the bones of the skull are still unjoined. Idara’s was covered in hair for most of her babyhood, but Oren’s baldness leaves his in plain view. I’ve become fascinated with it.

I used to think that the fontanelle just allowed the skull to deform on its way down the birth canal, but I recently learned that it serves another, more noble purpose: it allows the brain to expand faster than the normal growth of bone would allow. I had to pause to think about that for a moment. We often hear about the incredible cognitive changes going on in a baby’s brain in the beginning of their life, and now here’s a physical, visible, pulsating manifestation of it.

There’s a metaphor in there somewhere about age and ossification. For me it’s simply a reminder: growth requires flexibility. 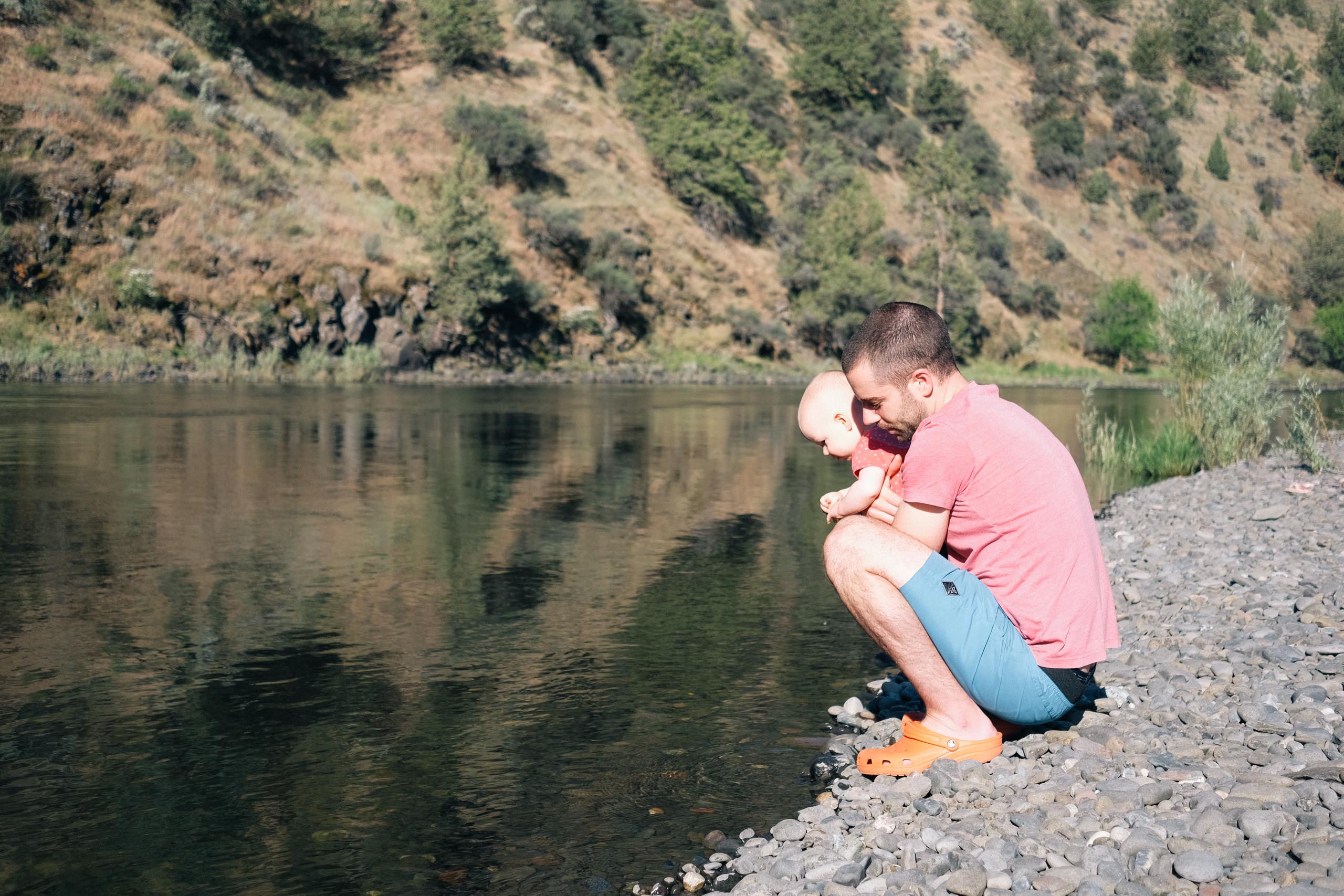 Oren and me on the bank of the John Day River, where we took him on his first camping trip.

Oren is nine months old and a shade over 20 pounds. He’s crawling, although it’s more of an army-style drag than a proper hands and knees crawl. He’s going further and faster now too, so much so that he’s worn away the skin at the top of his feet from dragging them across the floor. We’ve tried covering his feet with Band-Aids but he grinds those off too. His movement even has its own characteristic sound: slap-slap shhh, slap-slap shhh. The slaps are his hands hitting the hardwood floors and the shhh is him dragging his clothed belly across it. Whenever he’s bare-bellied it’s more of a slap-slap screeek, which is surely as uncomfortable as it sounds. We don’t leave him bare-bellied very often.

Not content with horizontal mobility, his new focus is pulling himself up onto anything that he can reach and grab hold of. The open dishwasher is one such location. Opening it is noisy and can be heard from across the house. In proper Pavlovian fashion, Oren comes crawling, or at least dragging, as soon as he hears it. His face is pure delight.

The other thing Oren loves to climb are the stairs. Somehow he manages to haul his giant head and tubby belly all the way to the top. We’re there to spot him, of course, which is a good thing because he hasn’t a single care for what would happen if he fell back down. And if he did care, he’d probably never climb them. The fontanelle reminds me that growth requires flexibility; growth also seems to require some ignorance of the consequences of failure. 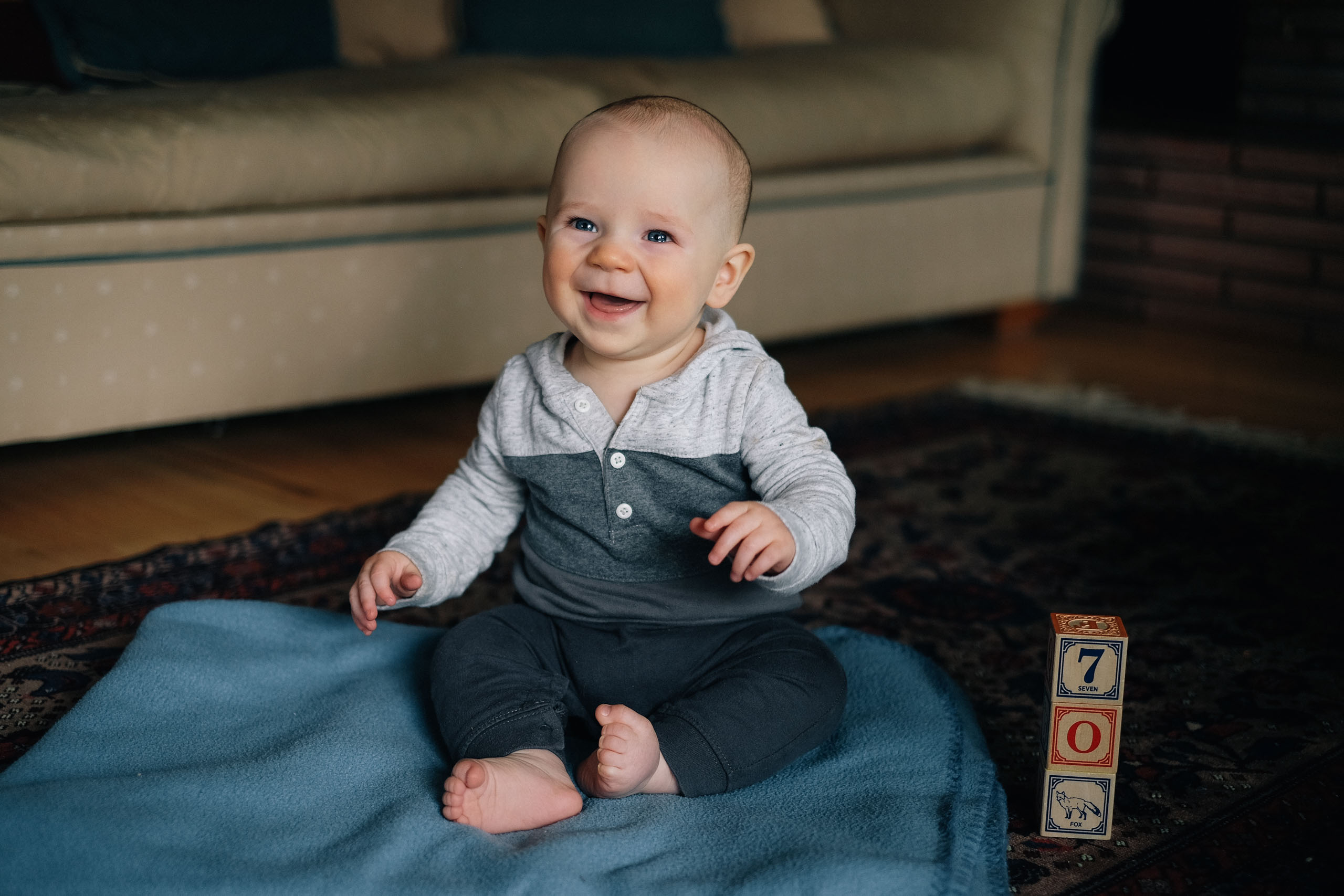 Three months ago I wrote that Oren was perfect, or rather, how I shouldn’t say that he was perfect and shouldn’t play favorites. When it was just Rachael and me and Idara I couldn’t help but feel sorry for the child or children who might come after her. Everybody seems to accept that you take more pictures of the first than of subsequent children, talk about them more, think about them more. That’s not to say that any of this is actually better for the child. Maybe the extra attention is detrimental. Either way, I remember recognizing that Idara didn’t have to share us with anyone else. Now that we have Oren, though, I realize that he’ll have an experience that Idara won’t: being our last.

He lies in his crib at night, tiny lungs breathing tiny breaths through a tiny mouth, his fontanelle bouncing up and down. It’s almost impossible to not see him as some sort of divine creation. And while it’s true that Idara laid in her crib like that once, too, with tiny lungs and tiny breaths, I never had to pause and remind myself to relish this moment because I would never experience anything like this again. Now with Oren it is our last time. Perhaps there will be other babies in our lives, but not these babies, not our babies. 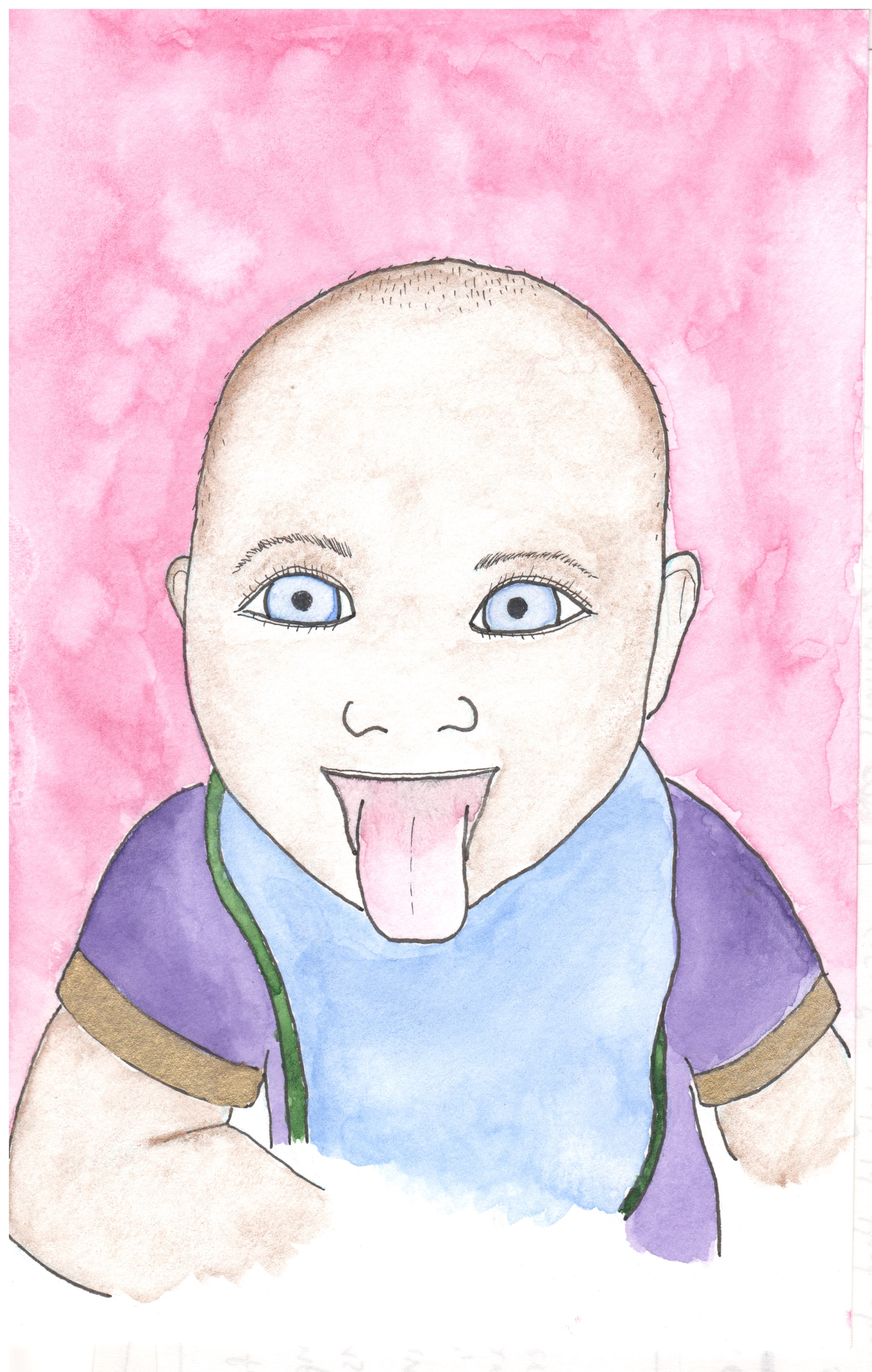 I painted Oren’s portrait one day while Idara was playing with watercolors.

There’s another experience that Oren will have that Idara didn’t. When Idara was born it was just Rachael and me. Now we have Idara, too, and so there are fifty percent more arms for hugging, lips for kissing, bodies for climbing over, hair for pulling. And when Idara isn’t hitting Oren, or throwing things at him, or taking away his toys, or stealing his food, she really is quite sweet. She’ll hug him until he can barely breathe, for example, or drag him to the other side of the house so that he can watch her play without touching anything (or else).

Perhaps it’s a kind of Stockholm syndrome, but Oren really seems to love this special treatment. Just this morning I carried him upstairs to rouse Idara from her sleep. As soon as she lifted her head from the pillow and greeted him, he squealed with delight and tried to crawl out of my arms and into bed with her. Truly, there’s no one who seems to bring more joy to Oren’s life than his big sister.

The most important relationships in my life outside of Rachael and Idara and Oren are those I have with my brother and sister, and so it remains my one great hope that someday she’ll be able to say the same. 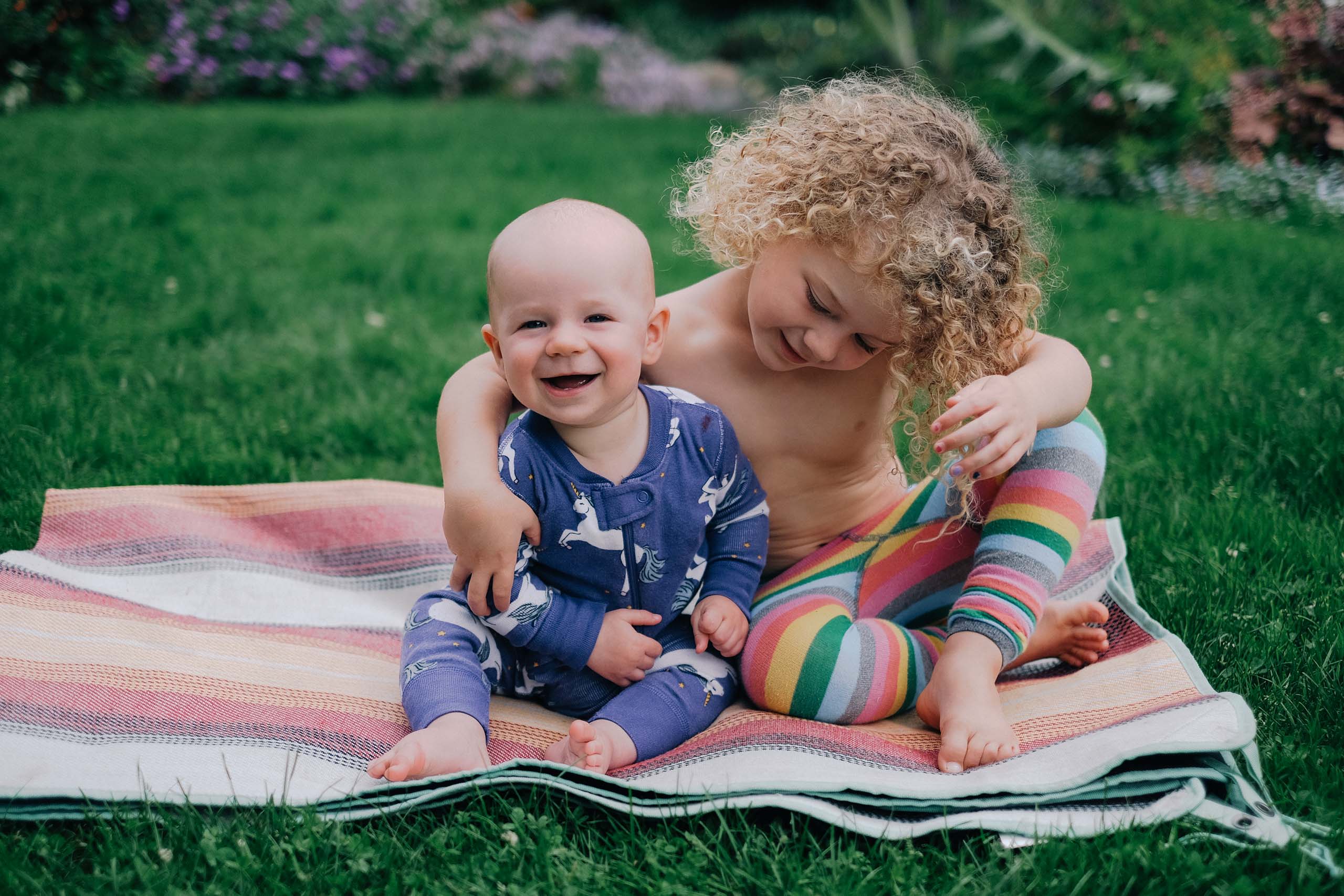 Oren at nine months, Idara at three and three quarters.