One of my favorite movie scenes comes from “Up in The Air.” George Clooney plays a man who’s hired out by other companies “who don’t have the courage to sack their own employees.” When Clooney lays these people off, he tells them, “This is a rebirth.” And how could it not be? Something new will grow from being laid off, he tells them, whether they’re ready for it or not. I think that this mindset is especially valuable right now.

There are days when I mourn what I’ve lost as a teacher, what my students are losing of their childhood and education, and what our society is losing, and will lose, because of this virus. But I try not to let myself overlook the opportunities it brings. One of those opportunities is to rethink what it means to be a teacher, and how to teach effectively. I’ve collected a few of these thoughts below.

Ever since schools were closed in March, I’ve seen a variety of school and teacher responses. Most schools, it seems, are linking students and teachers via video conferencing (Zoom or Google Hangouts) on some sort of reduced but regular schedule. Others have banned video conferencing altogether, instead directing teachers to create lectures and learning material that students can access individually on their own schedule. Others are splitting the difference, posting lecture materials and then hosting optional office hours where students can come ask questions.

I’m trying to master this third option. I hold “class” for an hour on Monday and Wednesday mornings, and I also record three or four video lectures for students to watch on their own.

Recording the lectures has been enormously beneficial for my own teaching. More on that below. But it’s the classes, where we can see each other and talk to each other, that are holding everything together.

I’ll never forget our first online class. I’d sent an announcement to my students the day before reminding them that we’d be meeting. I did not expect many to show up. There were many things I imagined could be pushing them away: the fact that the school district had all but said that school would be optional for the rest of the year, the anxiety of a once-in-a-century pandemic, and perhaps worst of all, the math. After all, there’s a reason we require students to take algebra: most probably wouldn’t do it on their own. Even many of my strongest students, for all of their mathematical abilities, seem to prefer doing anything but math.

So I’m sure you can imagine my surprise when, two minutes before our video call was to begin, I already had half a dozen students logged in. By the time we began there were a dozen, and they continued to show up in quick succession until I had two thirds of the class on the call.

Each new face that popped up on the screen reminded me that education is as much about the relationships as it is about the material, and without some sort of face to face interaction, we’re lost.

They hadn’t just showed up, either. Many of them were smiling and seemed genuinely happy to be there. Not to see me, I’m sure, and certainly not for the math either. They were excited to see their friends, of course, but I think it was more than that. I think they were glad to be returning, at least digitally, to something that came before all of our lives were upended.

I’ll admit that some of this energy has faded since March. Fewer kids are logging on, and I see fewer smiling faces. But if anything, I think that’s a reflection of the fact that we are, collectively, exhausted. And while video is a valuable substitute, it cannot replace the real, in-person interaction that makes us human, and makes us see others as human, too.

There have been many good parts about moving to distance learning. One of the best parts for me has been finally having the time and incentive to create demonstration videos on math.

First, a brief segue: I didn’t do well in math when I was in school. My teachers told me I had the ability (don’t we all?) but I didn’t have the necessary discipline and study skills. When I came back to math in my twenties I didn’t have the luxury of attending in-person classes and so much of my review and new learning came via YouTube and Khan Academy.

Ever since I started teaching I’ve wanted to make this sort of material myself, partly to provide students with the same positive experiences I had of really focusing on an idea or problem without the distractions that come with being in a classroom, but also because I knew it would improve my own teaching. I think it has. 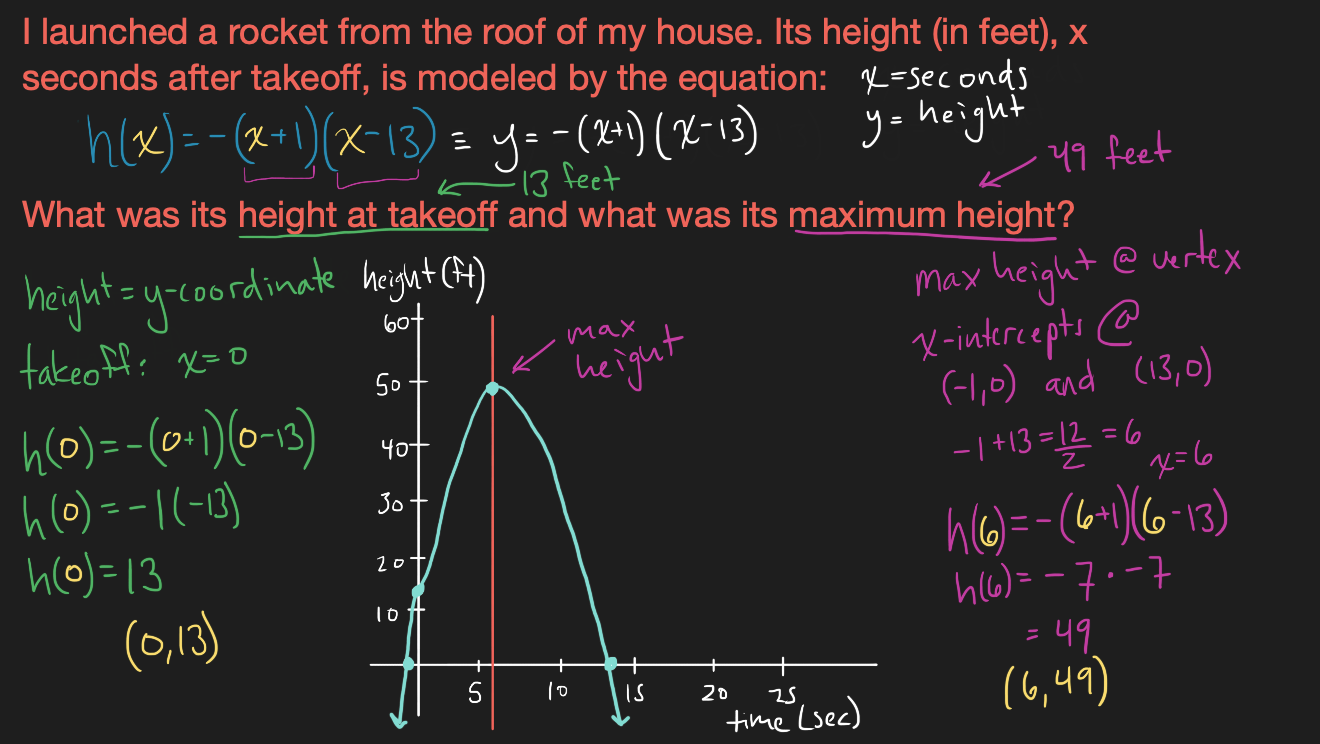 An image from one of my video demonstrations. This one’s on solving quadratic word problems.

In the before times there were two things about delivering a lesson in person which, depending on one’s perspective, made them less effective than they could’ve been. The first is that I could only deliver it once before moving on. The second is that I had my students directly in front of me as I was teaching. Their nods of understanding or raised eyebrows of bewilderment served as guideposts I could use to adjust my teaching as necessary. If something wasn’t clicking I could pivot and try another angle. As I said, whether this is a strength or a weakness depends on one’s perspective. It’s invaluable to be able to check for understanding, of course, but if I can’t then I’m going to be much more thoughtful about how I present an idea. Clarity, which was once one concern among many, is now one of the only things I can convey. It reminds me of Primo Levi’s universal decree: “This above all, be clear.”

So I’m trying to be clear. I’m planning out my video lectures in detail, recording them, and then reviewing and editing what I’ve created in order to make sure that it’s the best it can be. Here are a few examples, in case you’re interested or want to brush up on your algebra:

Despite the silver linings, I’m sure I’m not alone in eagerly awaiting the opportunity to put this behind us. And maybe that will be the true rebirth.