Insitu: Weeks One and Two

Back in December, I accepted an internship offer at Insitu, a company that designs and builds unmanned aerial vehicles (UAVs). In the spirit of making my learning visible, I’ll be writing a brief post every week or two on what I’m doing, learning, and thinking.

Needless to say, there will also be plenty left unsaid, too. There are things I can’t write about, so these posts will be about me (me! me! me!) rather than about the company’s products. If you’re curious about that stuff, check out Insitu’s Wikipedia page, their Vimeo page, or their website.

Even before the internship began, things got off to good start. My H.R. contact at Insitu put me in touch with another intern based in Portland who’d be starting around the same time as me. He and I met up for drinks a few times this spring and found that we had a lot in common. We’re both a bit older (I’m 30), we’re both married, both of us have a kid, and the list goes on. Having this early connection was heartening for two reasons:

First, I was worried that I’d be like Robert De Niro in The Intern - way older than everyone else, or at least the other interns. Not that being older is a problem, but I didn’t want to be an outsider. Knowing that at least one other intern would be my age helped allay those fears.

And second, I was glad to find someone who would be a friend before they’d be a colleague. To understand why this is especially important to me, a brief backstory: I used to work in radio. My first real-deal, full-time job was as the digital editor for a show out of New York called The Takeaway. I started on the same day as the digital producer, a woman who in many ways was more qualified than me. Since I was the editor and she was the producer, I got it into my head that I had to out-compete her at every turn. So rather than form a strong, collaborative working relationship, I wasted most of my energy trying to prove that I was better. It remains one of my greatest regrets and an experience I’ve since tried to avoid at all costs.

Most of my first day was spent watching presentations and completing onboarding tasks. All of us new hires started off in a conference room learning about the company, getting to know one another, getting our computers set up, etc. There were several H.R. representatives there, and they did a good job keeping things engaging. They even had cards on all the tables with conversation starters. Most of the other new hires were interns like myself, and it seemed that most of them were in their early twenties. There were a couple from Oregon State, and most were in school for mechanical engineering.

Once I’d finished the group onboarding, I went to meet my supervisor and the rest of the team. There were about twenty of them - too many names to remember. The workplace was nice and clean, though no different from what I’ve seen in almost every other office I’ve ever been in. The main difference is that all along the walls are giant prints of Insitu’s products and the people who use them. As a software developer somewhat removed from the hardware and customers it’d be easy to forget what you’re doing and for whom. The prints serve as a good reminder.

In addition to the office space, my supervisor showed me one of the labs where the equipment is tested using a Hardware in the Loop setup. The idea is that after the code has passed testing on the desktop machine on which it’s written, it’s moved over to the actual hardware that it’ll run on in real life.

Of all the things I saw on the first day, this was by far the most interesting. I’ve tinkered with Arduinos and other hardware-oriented projects for years, so it was cool to see what could be done with similar (albeit much more advanced) technology in a professional setting.

The onboarding process took about seven days, and they did a lot of things well. First and foremost, they integrate onboarding with what the rest of the team is doing. The team uses the Agile development process, so tasks are organized into stories and assigned to team members. Instead of being off in a silo working on stuff alone, my entire onboarding process was just treated as one of the team’s stories. The story was then broken up into sub-tasks like getting familiar with the version control process, learning about the UAVs and how they’re flown, watching company-wide training videos on workplace harassment, etc.

Many of these sub-tasks required working with other members of the team which was a good way to get to know people and finally remember some names. And when the team held their standup meeting at the beginning of every day, and everyone was updating everyone else on what they completed yesterday and what they planned to complete today, I actually had something to say. Obviously nobody cared that I had finished the “Preventing Electrostatic Discharge” training video, but it got me in the habit of keeping others updated and quickly made me feel like a part of the team.

The best part about the onboarding process, though, didn’t have anything to do with training or integrating with the team. It was about accountability and improvement. My final sub-task was to write a review of the onboarding process and post it for the entire team to see. This sends a strong message that the team cares about doing things well and fixing problems, even for those at the bottom of the totem pole. I found this very encouraging.

I love starting a new job. There’s nothing like a new beginning – whatever trajectory you set out on in the first days and weeks will likely define your entire time at the company or organization. It’s a great opportunity, but it’s also a double-edged sword. Everyone else is making their judgements of you, and it’s easy to believe that whatever opinions your colleageues form in the first few days will be permanent.

I felt this acutely in my first few days at Insitu. Was I smart enough to be here? A hard enough worker? Friendly enough? Cool enough? In the end, it comes down to one question: Do I belong? Now that I’m writing this, I know the answer, which is that I don’t know. And that’s okay. The point isn’t to shoehorn myself into something that isn’t a good fit, but rather to do what I know I’m capable of and accept that there are going to be challenges and discomfort.

One of the downsides of the internship is that it’s based in Hood River. It’s a cool town, but since I live over an hour away in Portland, the location presents some challenges. At first I considered driving out each day, but because of when my daughter wakes up and goes to sleep, I still wouldn’t see her at all during the week. Plus it’d be a lot of driving. 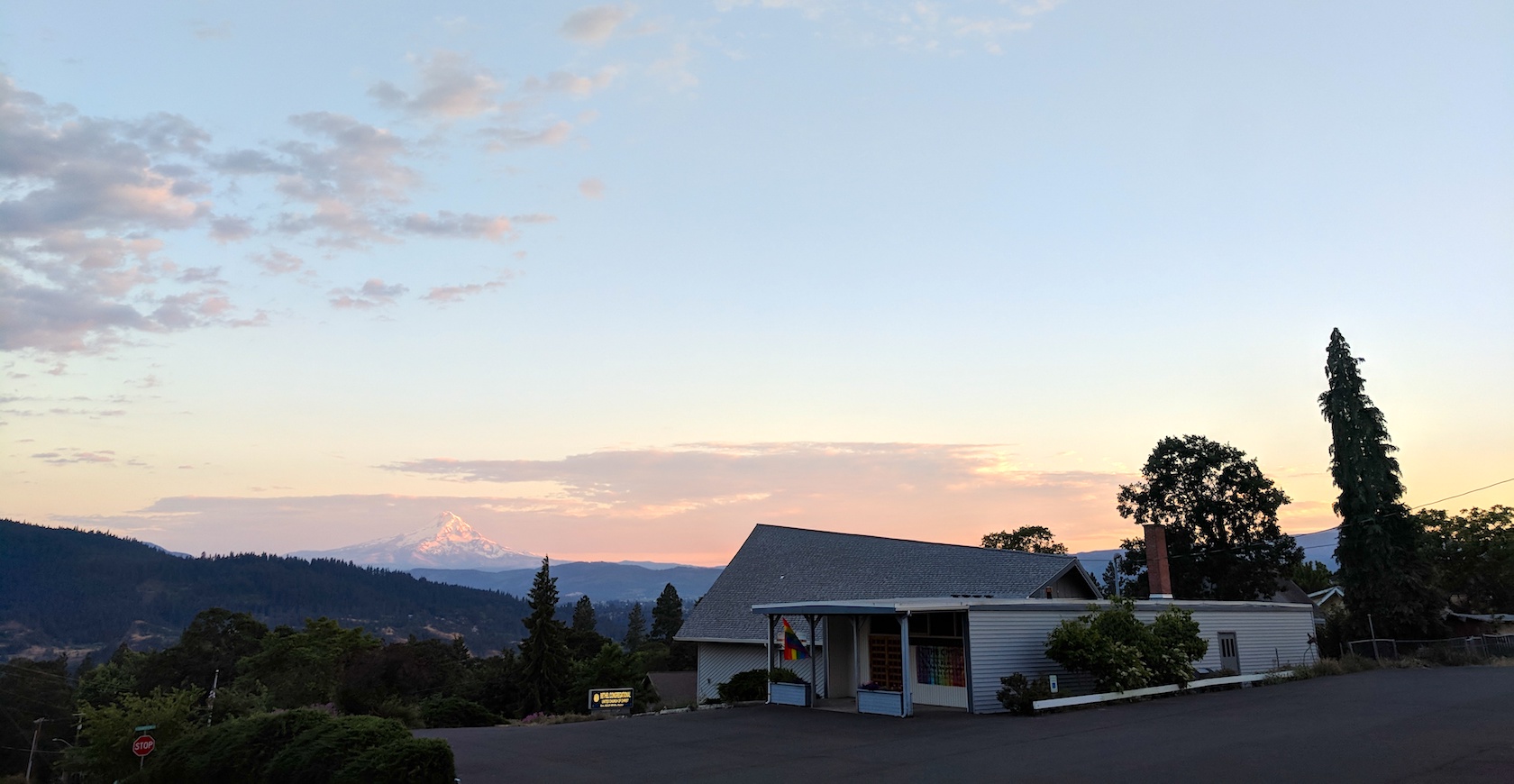 The view of Mount Hood from White Salmon, where I’m living during the internship.

Thankfully, Insitu arranges inexpensive housing for interns. I’m living just across the river from Hood River in a little town called White Salmon, which is not a bad place to spend a summer. It’s quiet and peaceful. Most things are closed here while I’m at work, except for the North Shore Cafe, where I’m writing this post. On the weekends I head back to Portland hang out with my family.