Idara at Three and a Half 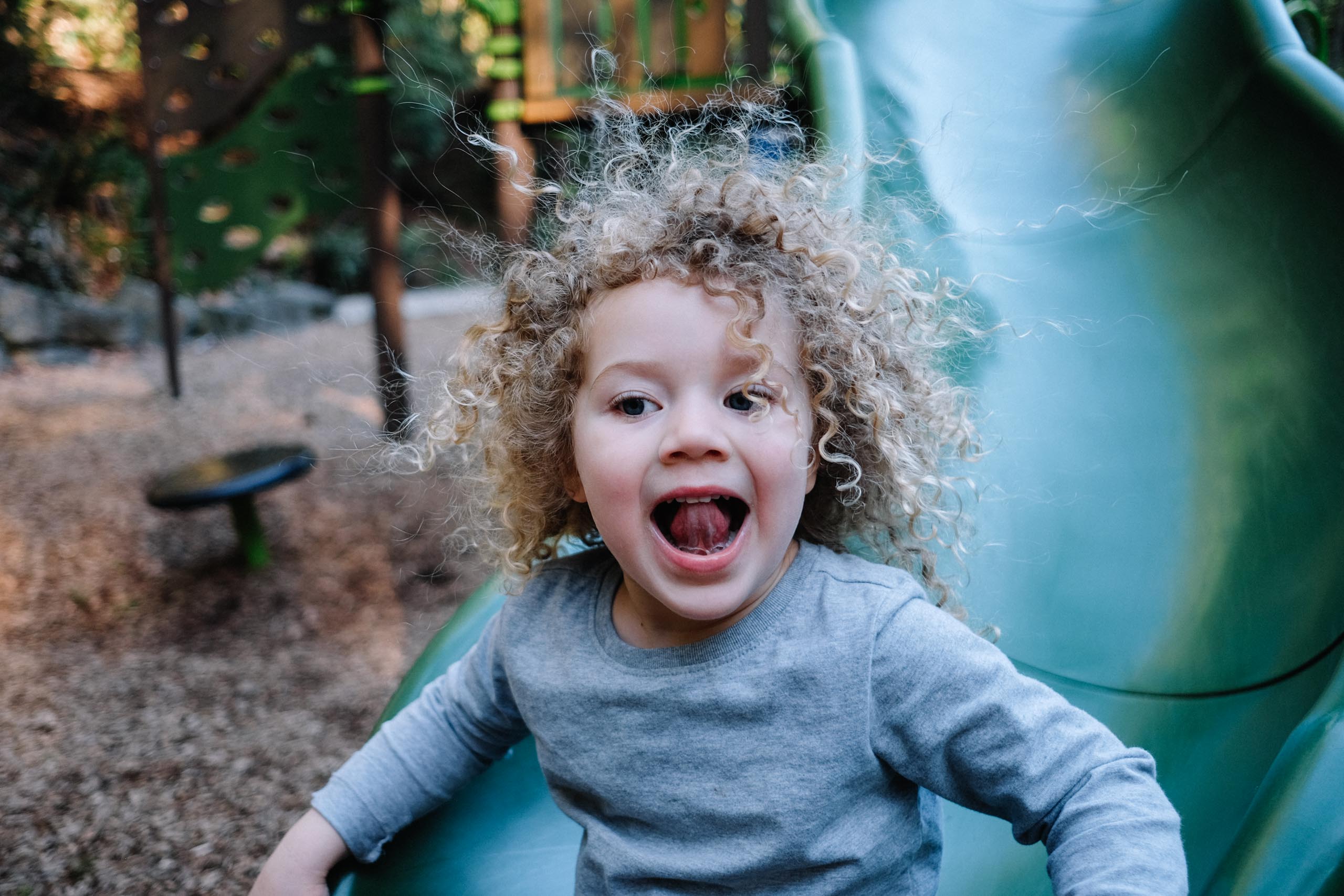 I’m not sure what it is about having her picture taken that forces Idara to stick out her tongue, but whatever it is, the force is strong.

Before Idara’s preschool closed for Covid-19, one of the other parents added this at the bottom of an email:

You probably hear this a lot, but Idara is just the best. She has such a kind, calm nature and her energy is just so positive and loving. When Allison is upset at school, she will just come over and sit nearby in this, “Oh hey, I’m here if you need anything” kind of way.

I’m sure you wouldn’t have a hard time believing that Idara’s nature with me and Rachael is not always kind, calm, and loving. So to receive a note like this, especially from someone I don’t know that well, made my day. Weeks later, I’m still thinking about it. 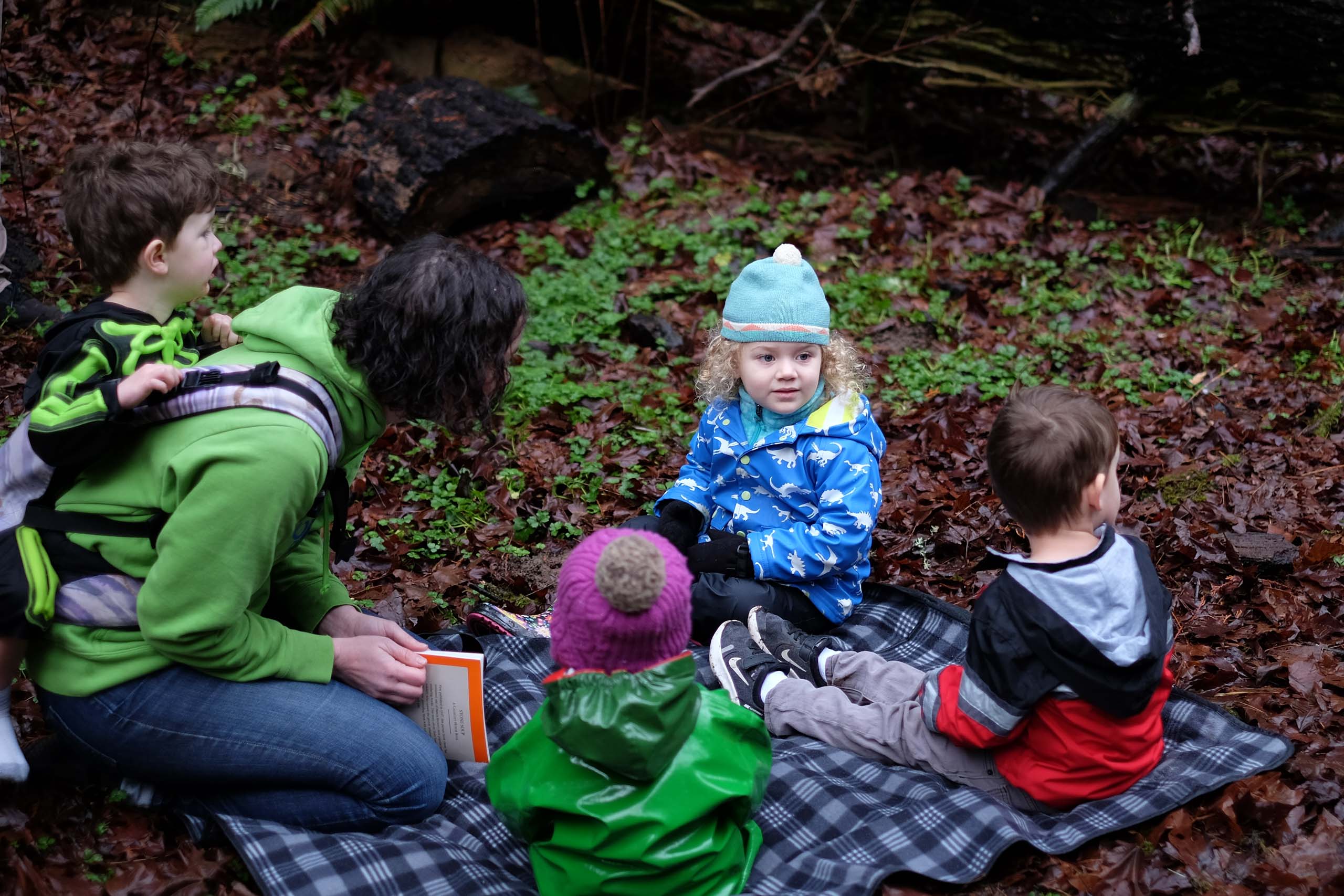 A friend of ours is starting an outdoor preschool and invited Idara for one of her first classes. This was pre-coronavirus.

It’s true, being sweet and caring has long been one of Idara’s strengths. And while it should be enough for our children to care for those around them, I want so much more for her. I want her to be assertive, even while I correct her for bossing others around. I want her to take risks, even while I try to prevent injury, both physical and otherwise. Most of all, I want her to be who she is without apology or embarrassment.

When my mom and I celebrated her birthday over sushi last year, I asked her what it was like to turn 60. She said that each decade had been better than the last. I feel this way, too. Not because of greater freedom (which is nice) or greater ability (which is nicer) or even greater responsibility (which is one of the best parts), but because I’ve become much better at accepting myself.

Case in point: Before my high school closed a couple weeks ago I was walking across the parking lot when another teacher who I didn’t know said, “Good morning!” I returned the greeting, only to realize that he was actually talking to someone a few feet behind me.

It was soul-crushing. Or at least, it would’ve been a decade ago. This time around, I laughed to myself and then went on to recount the story to my students 30 minutes later. They all laughed at me, but more importantly, I laughed at myself, too. None of this is to say that I’ve conquered embarrassment, of course. Only that I’m more comfortable in my own skin than I used to be.

I want Idara to be comfortable in her own skin, too. And she is! That’s one of the wonderful things about being three. But I know that as she transitions into childhood and adolescence it will become more and more difficult. Hopefully she turns a corner just as I have. 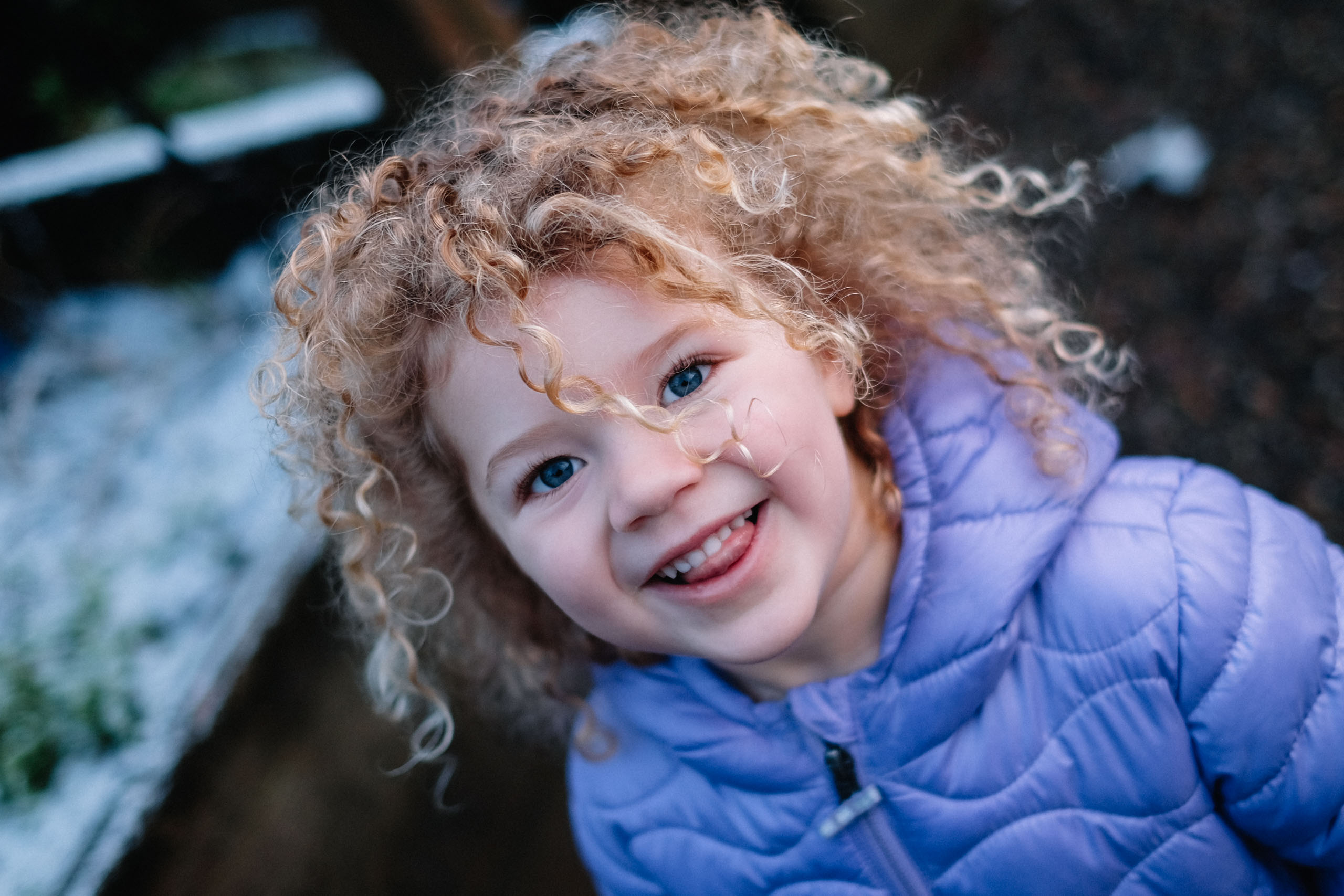 One of my favorite pictures of Idara, taken during one of Portland’s few snow days. There’s that tongue again. 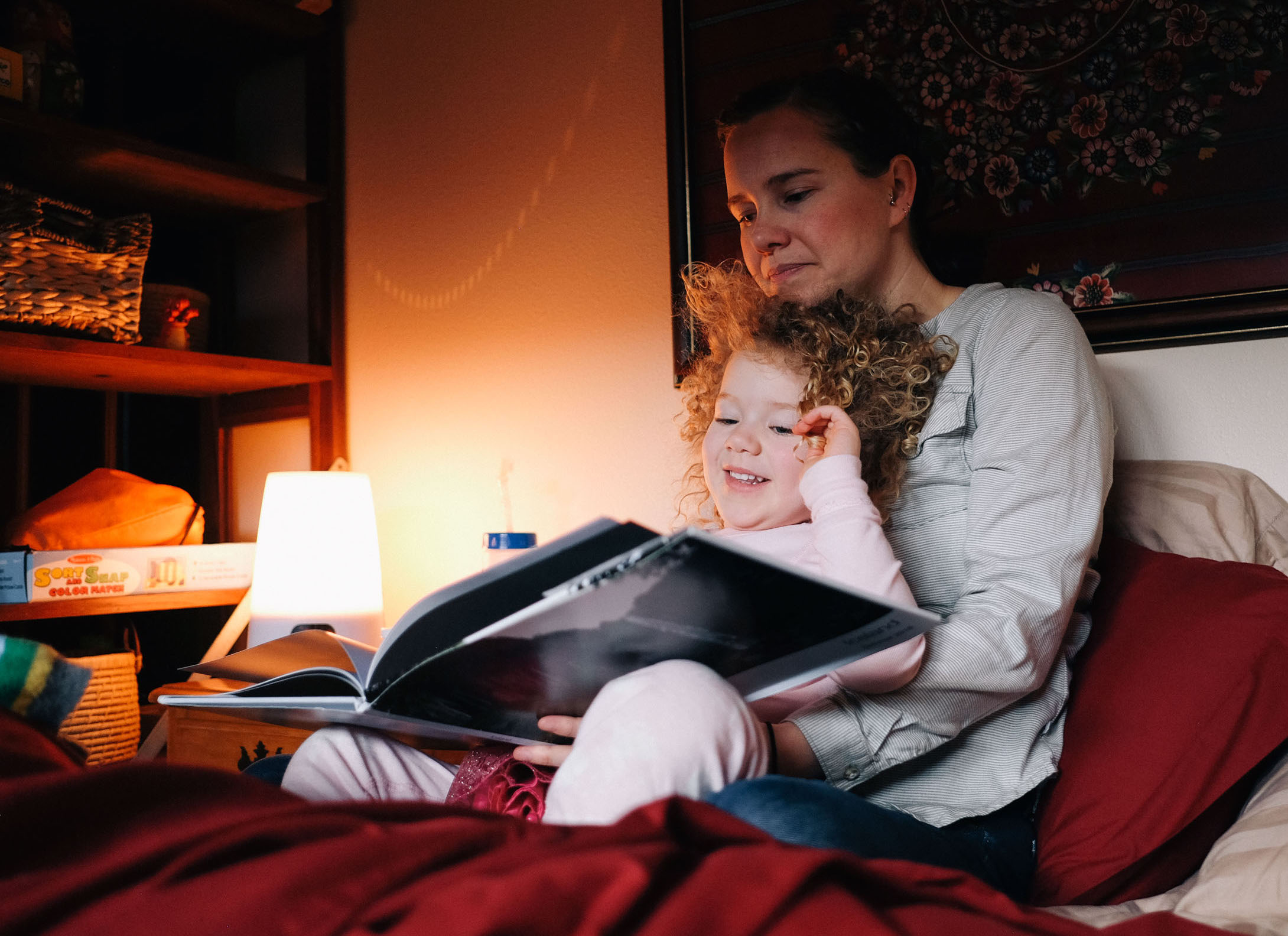 Every morning Idara and Rachael read a book in bed. 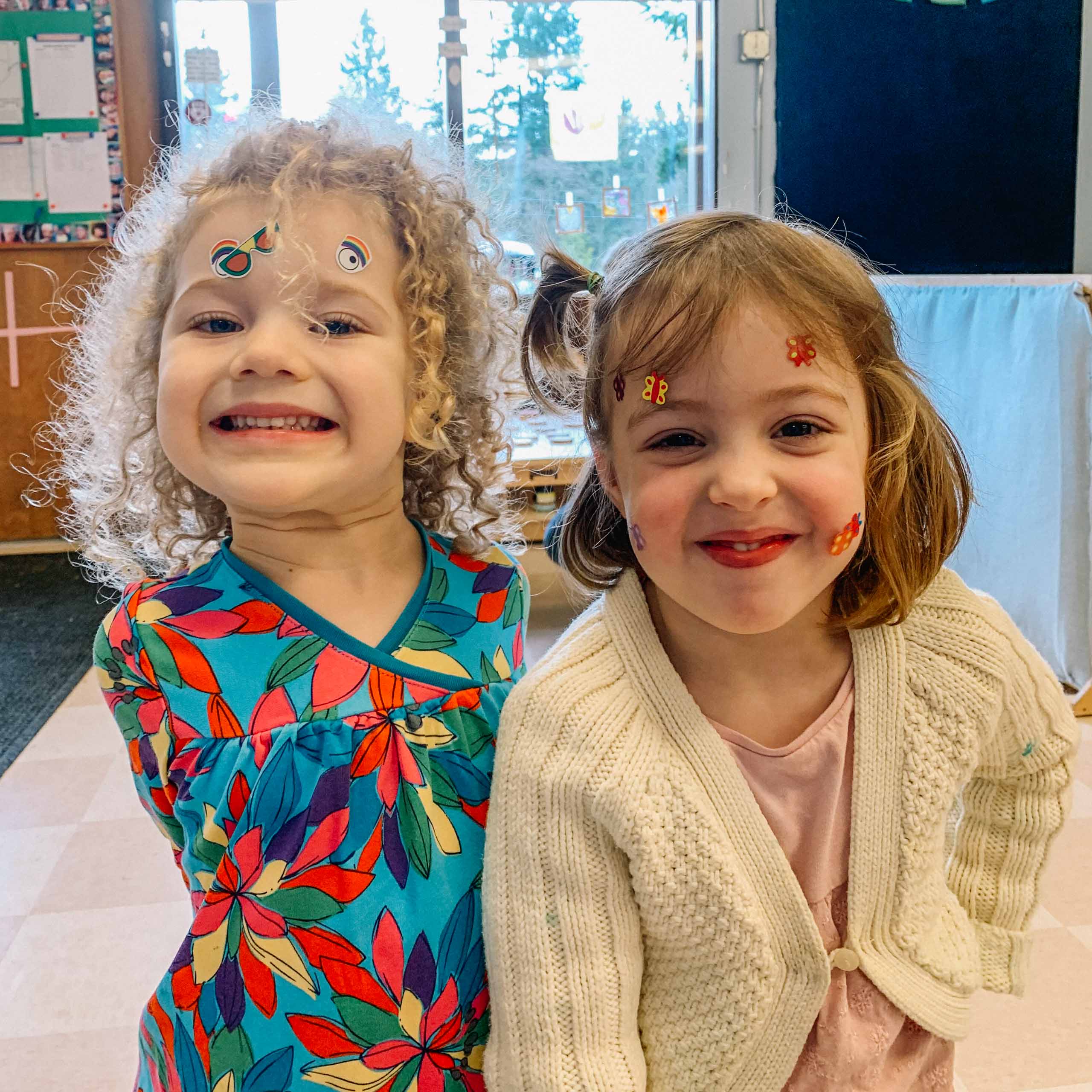 Idara’s closest friend at her school is Eleanor. Actually, I’d say she’s Idara’s only friend who isn’t family, like her cousin Josie, or basically family, like Elsie.

They had a few play dates before Covid-19 got serious, and we set up a video chat yesterday. As a side note: If you think your work meetings are unproductive, try setting a couple of three year olds up on a Zoom call. 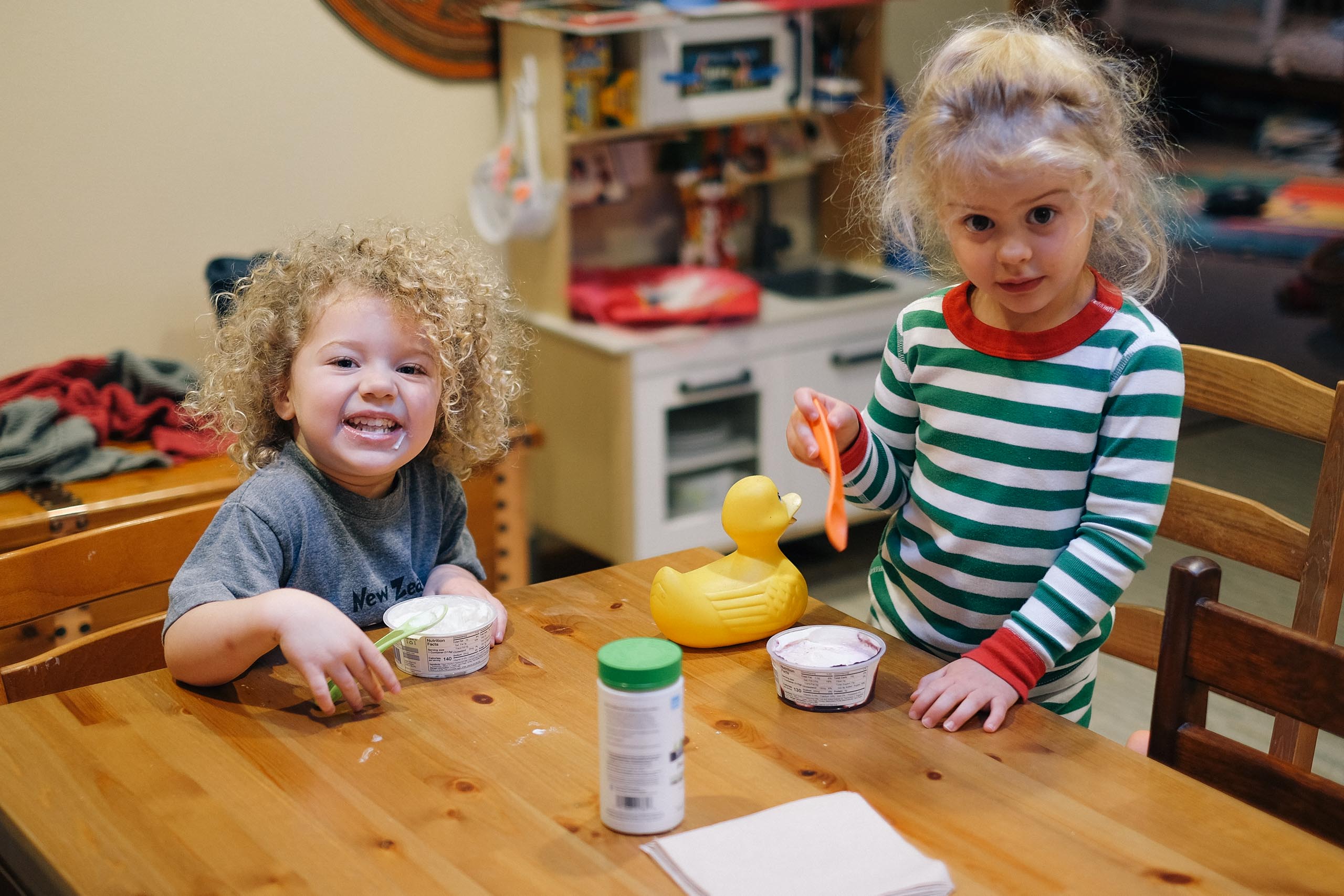 Our friends Jake and Bethany visited over winter break. Their daughter, Elsie, was born a few months after Idara. Since we only lived next to one another for the first year of their lives they haven’t spent much time together, but thanks to video calls and visits like this they know each other well, and thankfully seem to like one another, too. 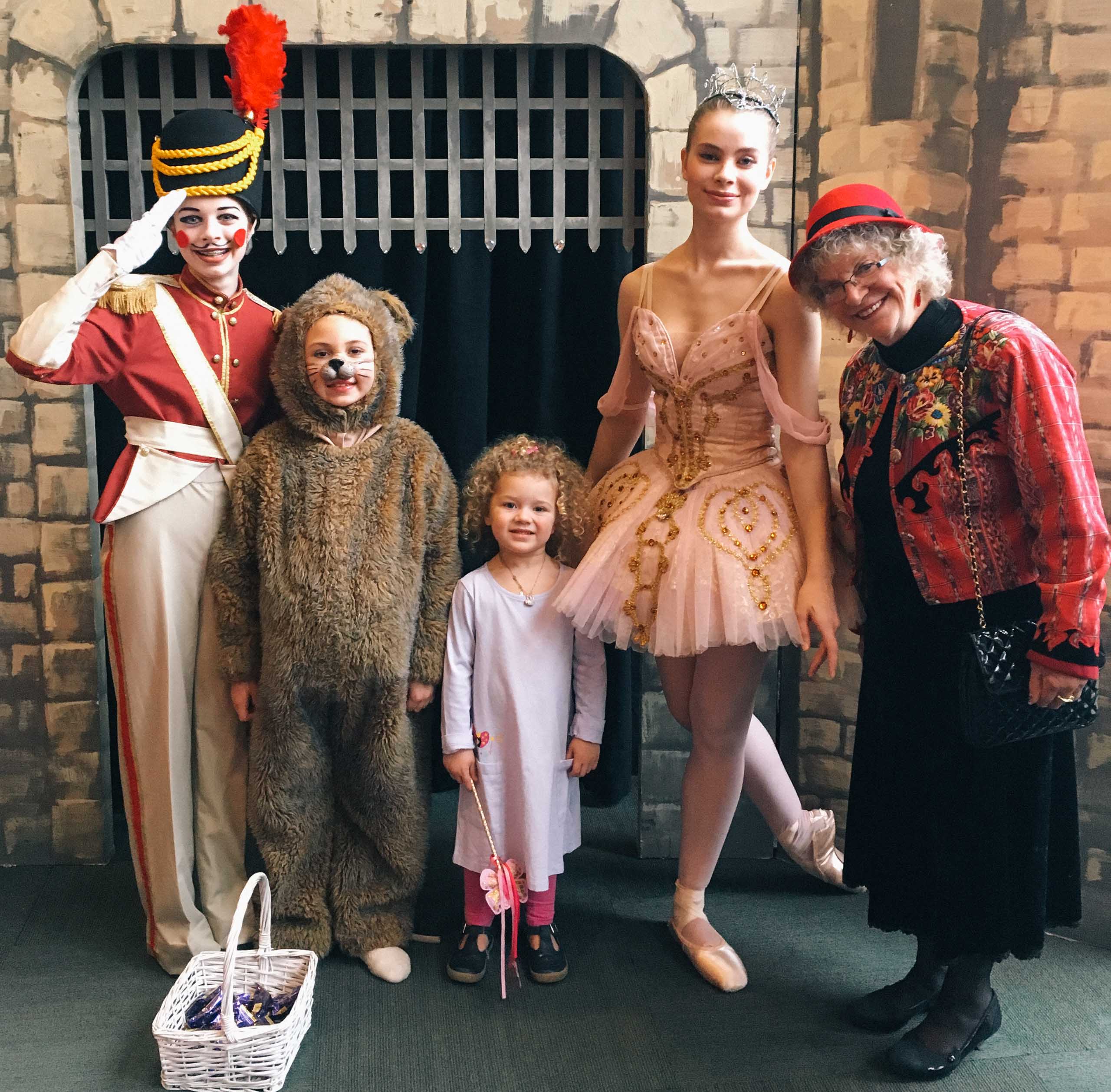 Idara and Susan with some characters from the Nutcracker.

One thing that Idara has going for her is her great aunt Susan, who Idara calls Tia. Over Christmas they went to see The Nutcracker, and a few weeks ago they went to see Sleeping Beauty and a performance based on Daniel Tiger’s Neighborhood.

Susan doesn’t just take Idara to the shows – she also spends several weeks preparing Idara for the event by reading books about the show and acting it out with dolls and stuffed animals.

The only problem is that when Susan goes home we’re left to act out the stories in her absence. So we defend the castle from Maleficent, and practice descending staircases like royalty, and wake each other up with kisses on the hand (we decided that kissing people on the lips while they’re asleep is a bit too #MeToo). My favorite game is when Idara plays “sleeping for one hundred years.” I’ll bet you can guess why. 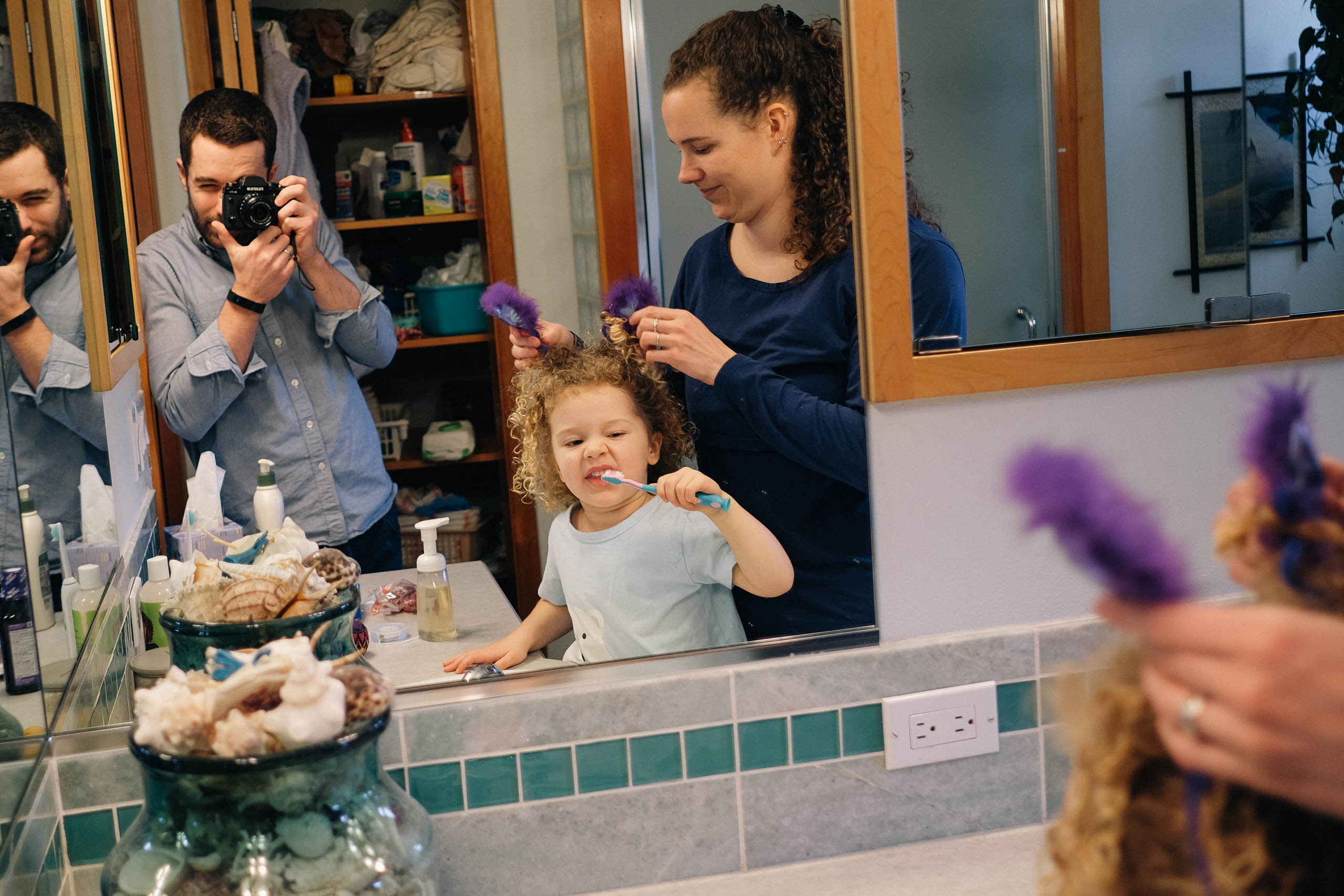 Idara brushing her teeth and Rachael fixing her hair. Eventually fixing Idara’s hair is all we’ll ever have time for.

One day, after they’d read Sleeping Beauty for the 243rd time, Idara asked Rachael: “Is Maleficent bad?” Rachael responded: “No. She was just misunderstood. Everybody has a little good in them.”1 A few weeks later, we were watching Moana. As Te Kā, the movie’s main antagonist attacked Moana, Idara wondered aloud: “Do you think he has little good in him?” A little later on, you find out that Te Kā does in fact have a little good in him. Score one point for Idara.

You might say that Idara is just parroting back what she’s heard, but I’d say that this is exactly the point. I don’t mean this as commentary on Idara’s goodness, or on teaching her the right lessons – only that even if it feels like everything we do and say is completely lost on her, she really is taking in what’s around her and using it to make sense of the world. Which makes what I wrote about allowing her to be herself all the more important. 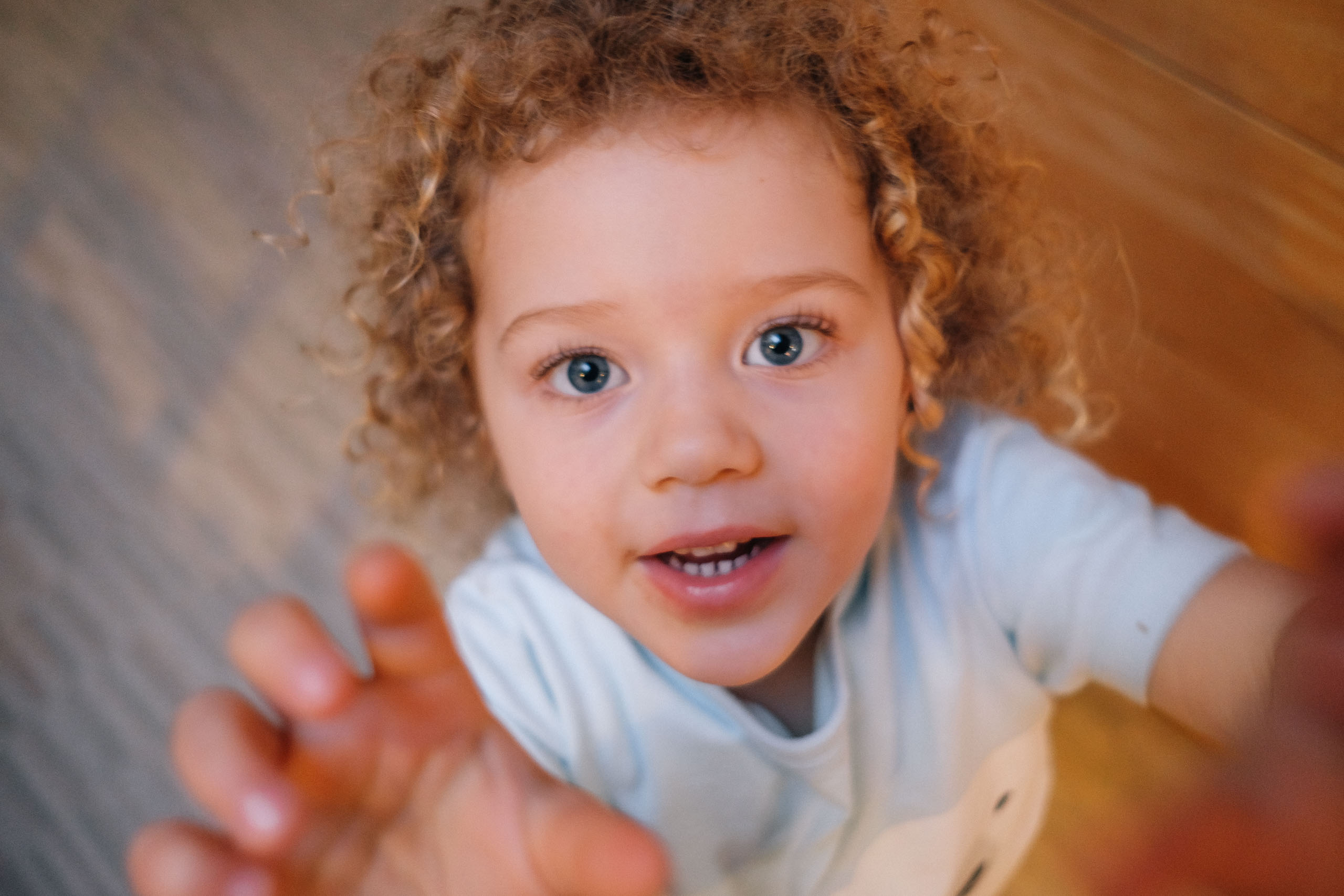 Idara decides that it’s time for her to be on the other side of the camera.

Idara sees me taking pictures all the time. Now she’s decided that she wants to be on the other side of the camera. Usually I try not to give her expensive things to play with, but after I looked at a few of the pictures she’d taken I decided that getting a peak into her perspective on the world was worth the risk. I’ve included a few of her photographs and captions below. 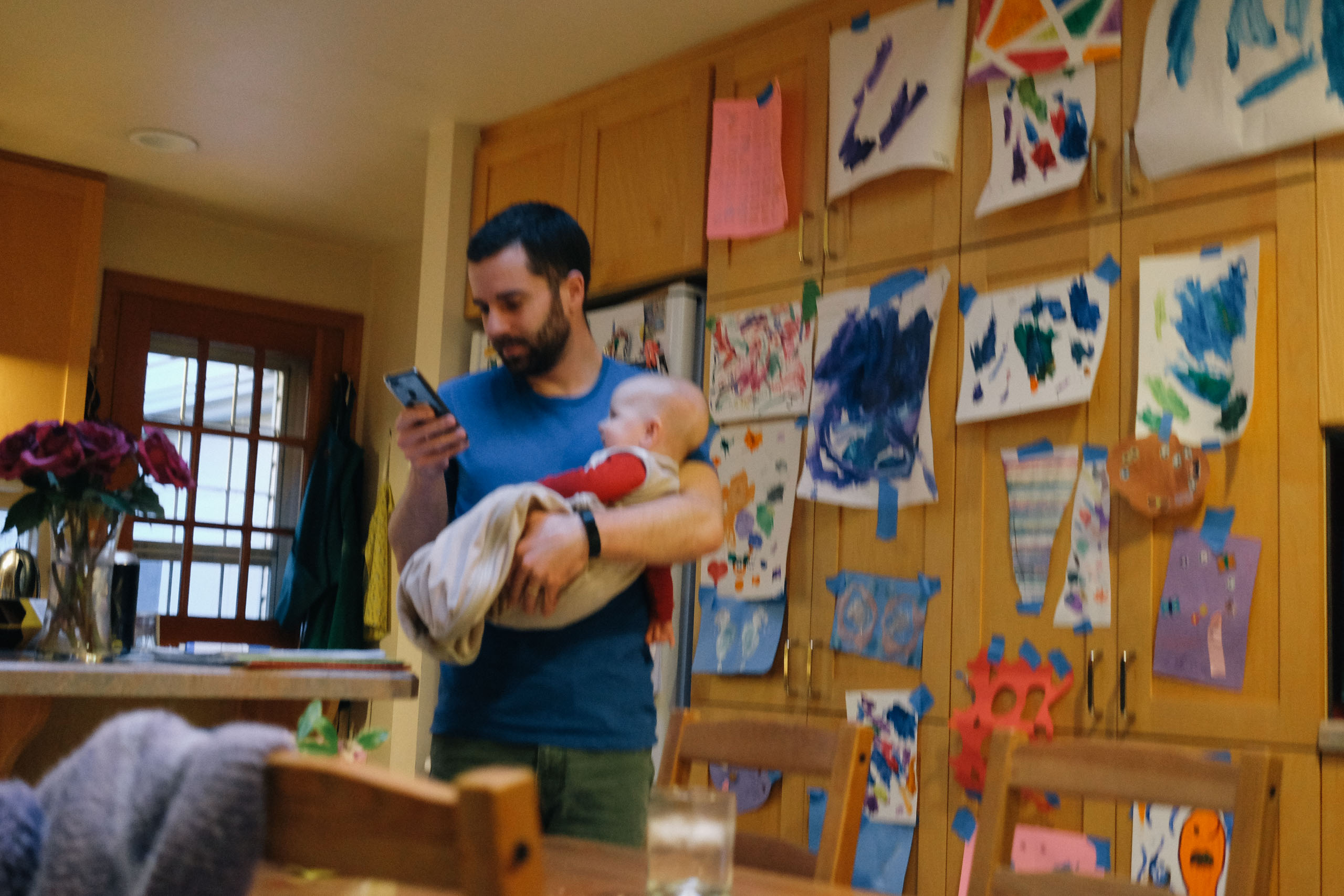 Idara catches me staring at my phone instead of paying attention to her and Oren. Idara’s caption: “You’re holding Oren.” 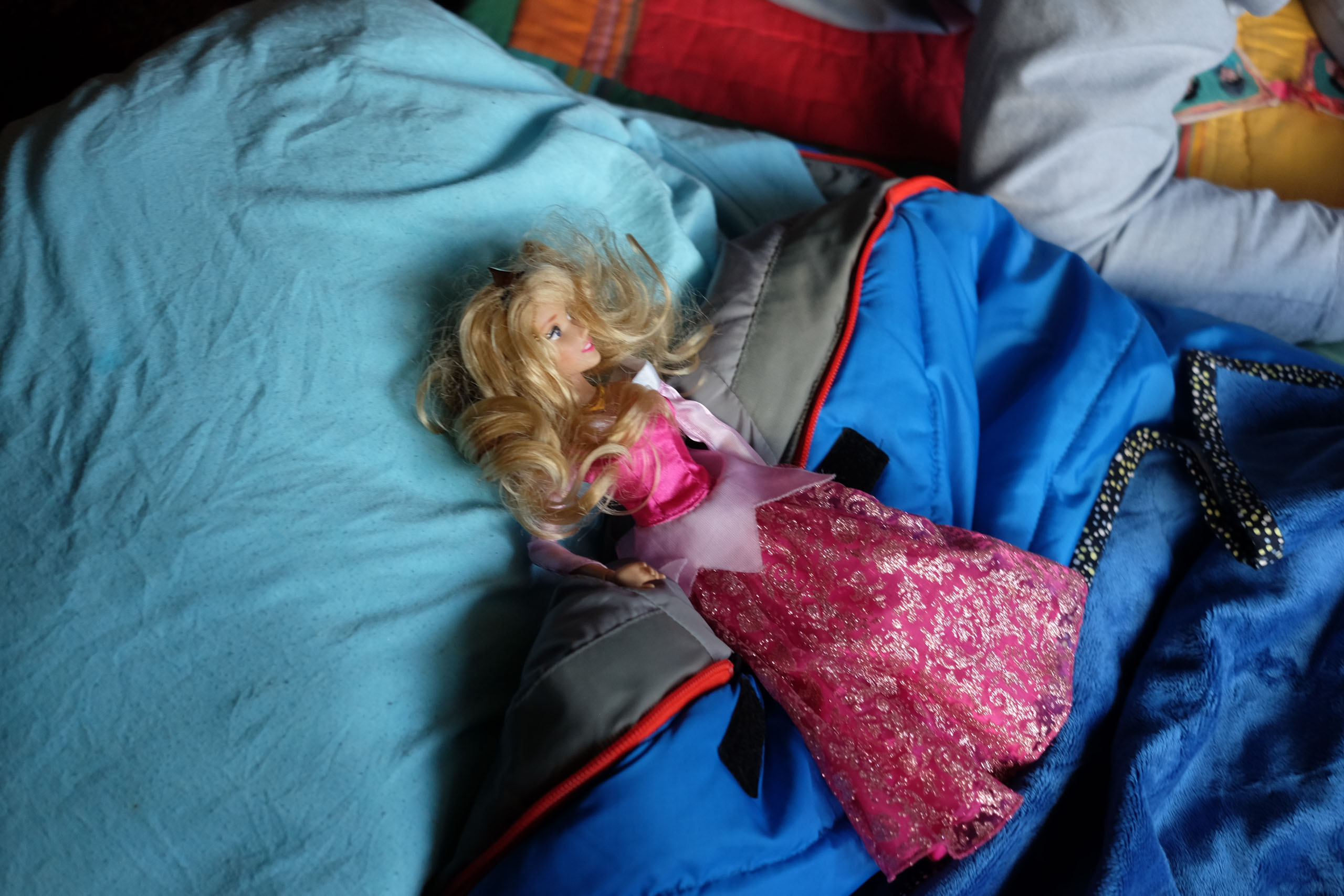 One of the dolls that Susan bought Idara. This one is supposed to be Aurora from Sleeping Beauty. Idara’s caption: “Aurora is sleeping!” 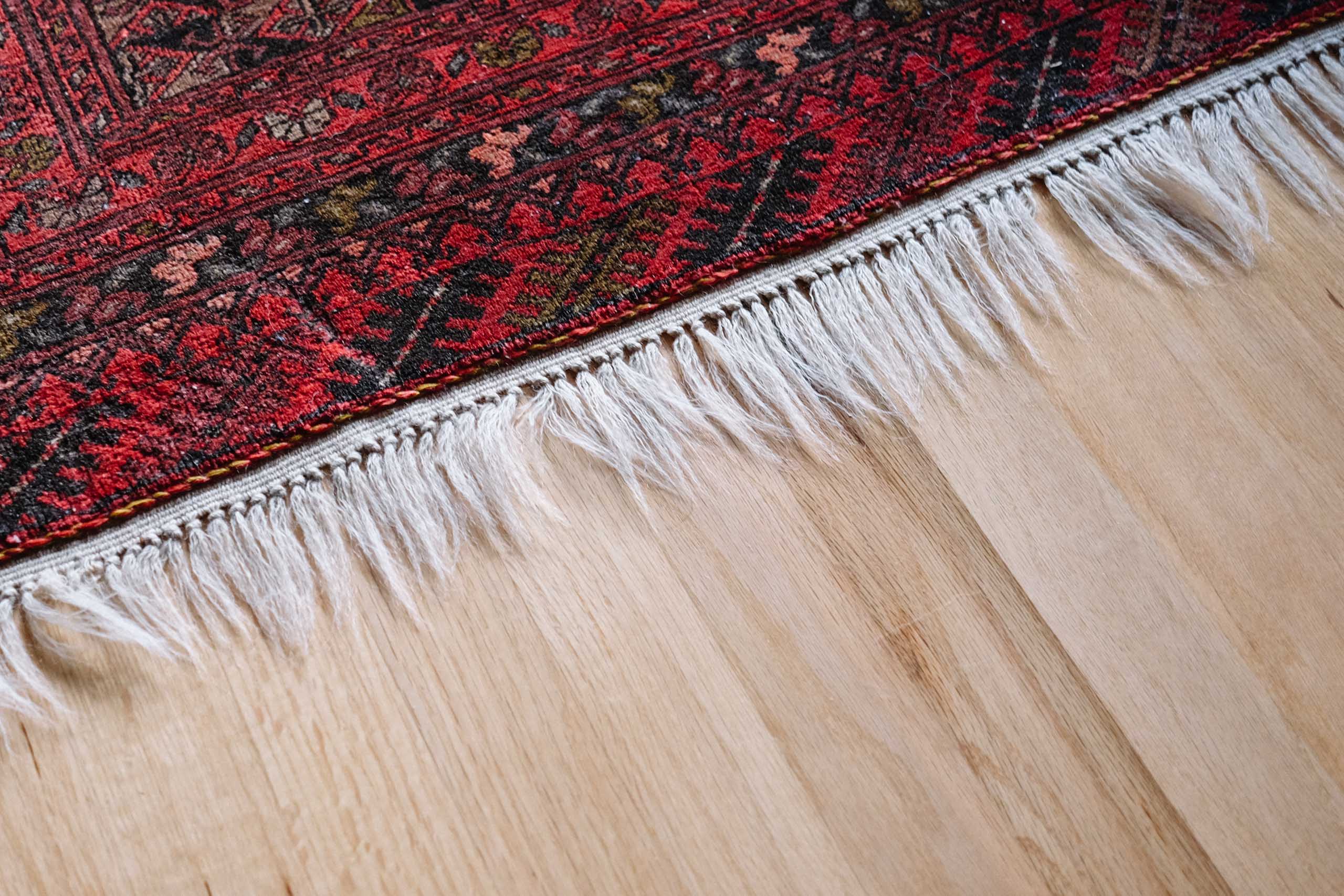 Texture and angle. This is probably my favorite of all of Idara’s pictures. Idara’s caption: “There are two floors.” 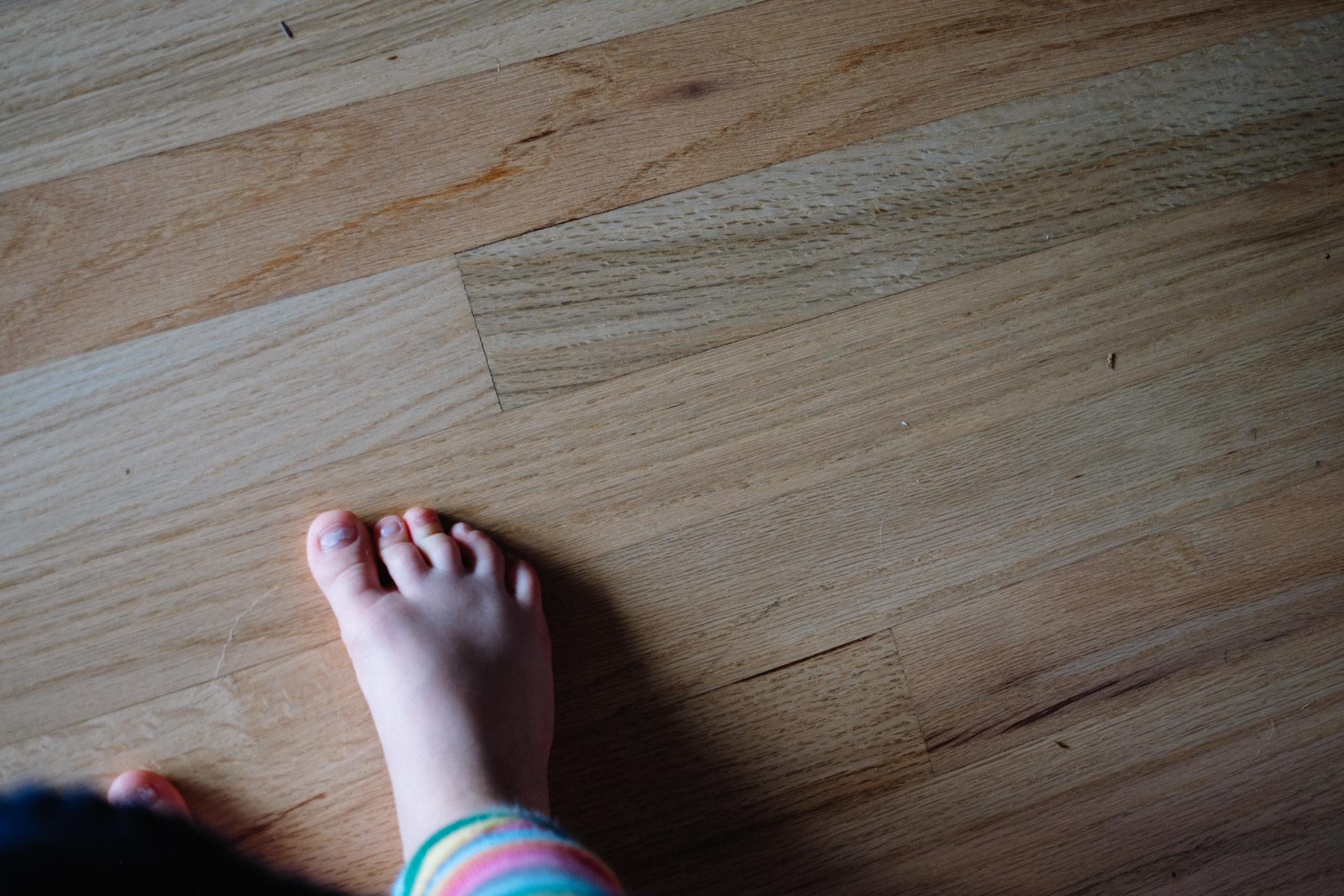 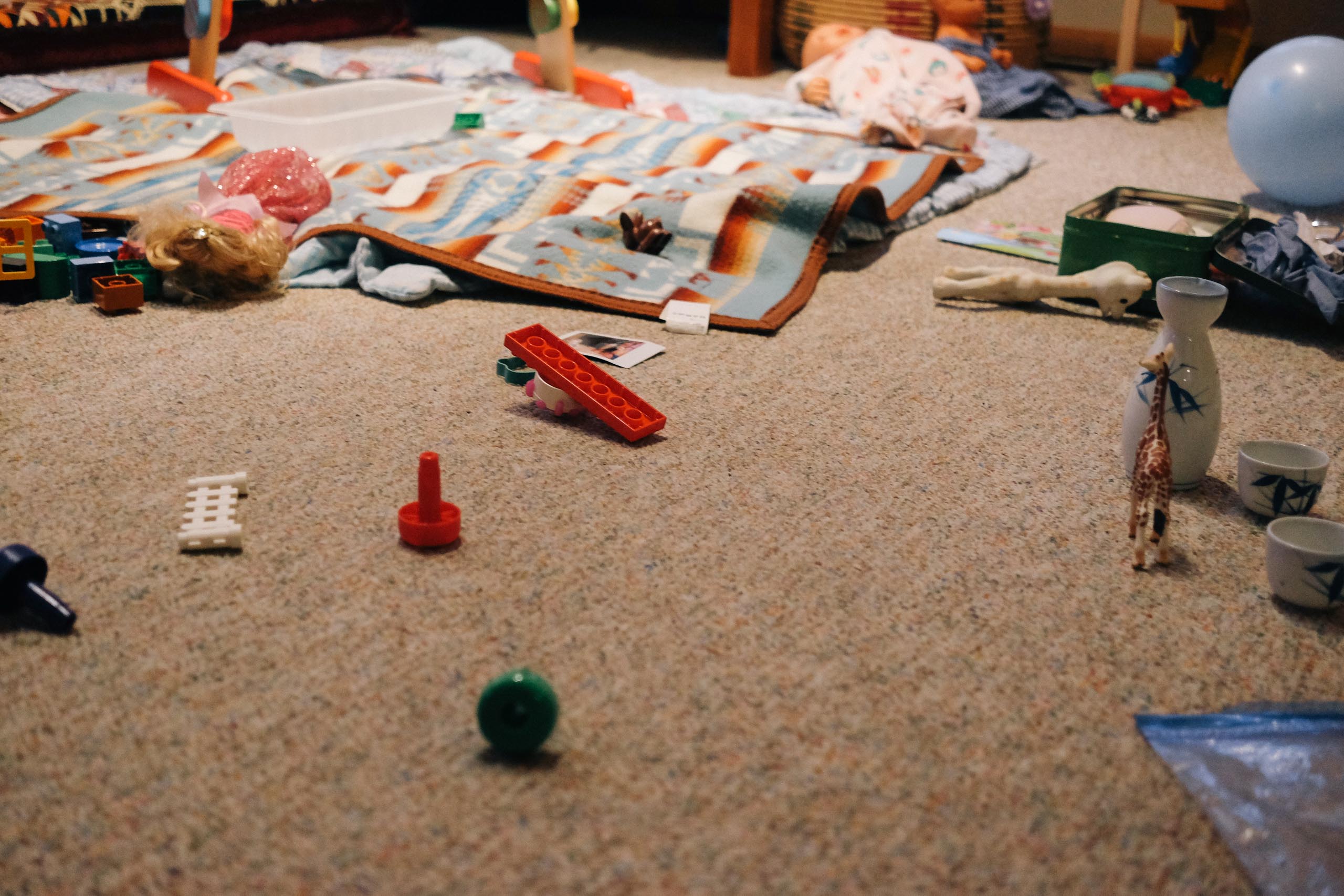 Idara captures a minefield of small pieces of plastic just waiting to destroy someone’s bare foot. Idara’s caption: “There’s a mess of Legos and there’s Aurora in the middle.”

In the interest of trying something else that’s a bit different, I decided to include a brief interview with Idara. In case the embedded video below doesn’t show up, here’s a link.

One more note: If you view this post in your browser then you should be able to click on all of the pictures to see them in their full-resolution glory. Scroll up and give it a try!