Walking in the Rain 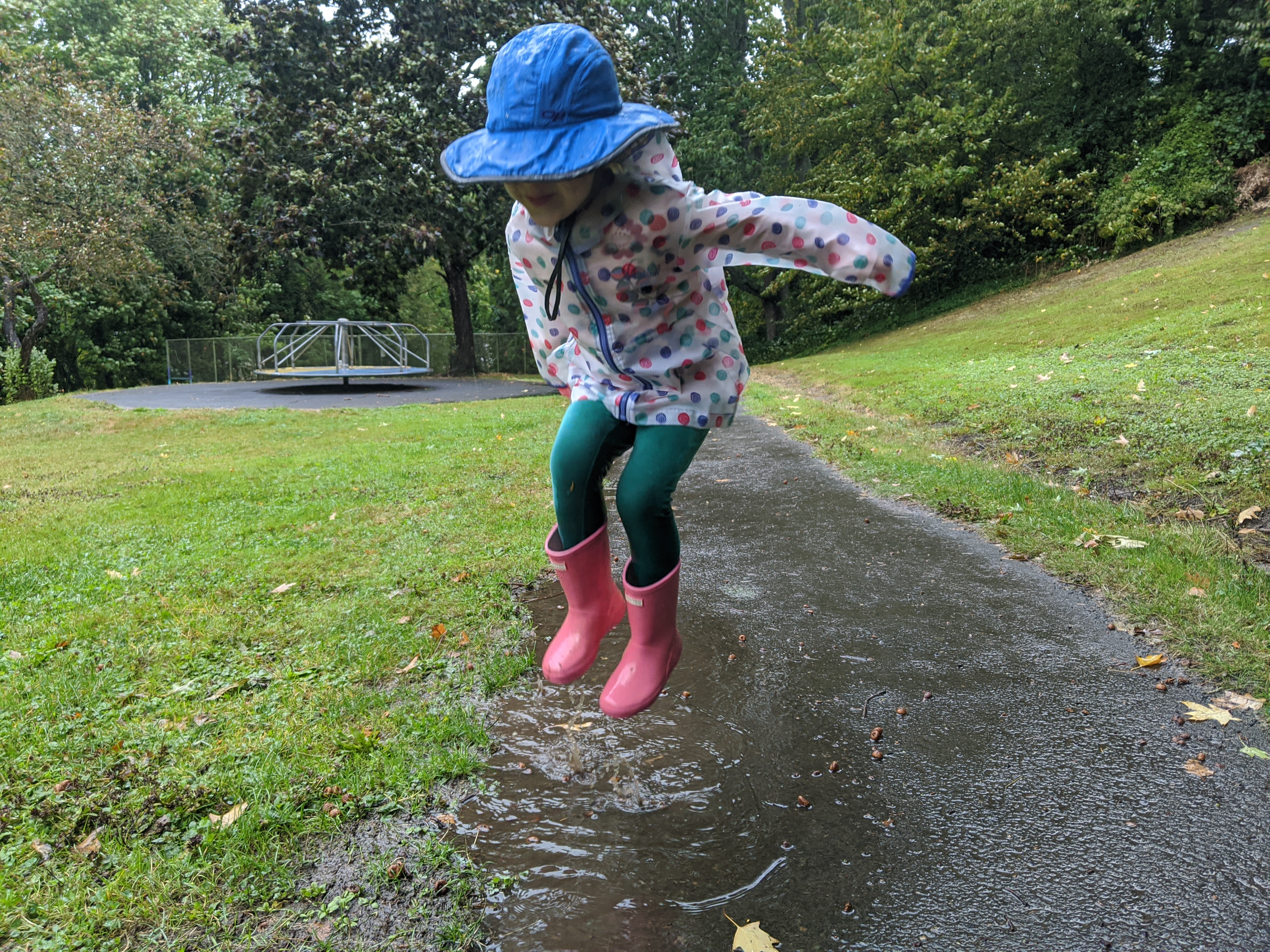 Yesterday morning the rain was coming down in sheets and I’d spent a long time staring at the screen of my laptop. I decided to rope Idara into an adventure.

Idara dressed herself. Green tights and pink rubber boots (with socks this time), a long-sleeve pink shirt and then a rubber rain jacket with pink and green and purple dots. It was a level of color coordination that could drive one to nausea, not so much because there’s anything wrong with matching, but because no four-year-old1 should be that good at it. Thankfully she donned a blue rain hat which clashed with the rest of the outfit, if only slightly, and off we went.

There are as many magical things about small children as there are words on this page, and among the most magical is their indifference to weather. In this way we’re born dogs and grow into cats. All that Idara needs is the right clothes for the elements and it’s as if the elements don’t exist.

This is not to say that she had the right clothes on this particular day. In fact, she did not. Four blocks from the house, which happens to be the point at which turning back means turning back for good, Idara looked up at me from beneath the brim of her rain hat and said the two scariest words a father can hear while on a walk with his daughter: “I’m cold.” While her rain jacket and rain hat had prepared her for the rain, I’d been too distracted by the interplay of green and pink on her clothes to realize that there was nothing warm about her outfit at all. Of course she was cold.

“You just have to get moving,” I said.

“Because it warms you up.”

“Because breaking down carbohydrates is an exothermic reaction.”

We walked faster, mostly because I was holding her hand now and dragging her along. But she wasn’t enthusiastic and I could tell that it wouldn’t be long before she’d decide that she wanted to go home. And then I saw a puddle.

It was unassuming, as puddles are, and the only thing that stood out about it was how little bits of it danced up as raindrops hammered it from above.

“Should we jump in?”

Immediately after asking it I realized that this was a rhetorical question.

This was not Idara’s first puddle jump; her form is well-honed. She gathered herself on its edge, catapulted off both feet, and brought them down together right in the middle. Muddy water flew up around her, along with leaves and pine needles and bits of gravel, up onto her boots and jacket, and onto her pants, leaving big dark green circles. Now she was cold and wet. I held my breath. A moment later she’d found another puddle and was stomping in that one, too.

As the dark green circles on her pants grew, so too did her smile. Before long there was barely a dry spot on her pants at all, and she told me that her socks were wet too, but it didn’t matter, because we were on an adventure. 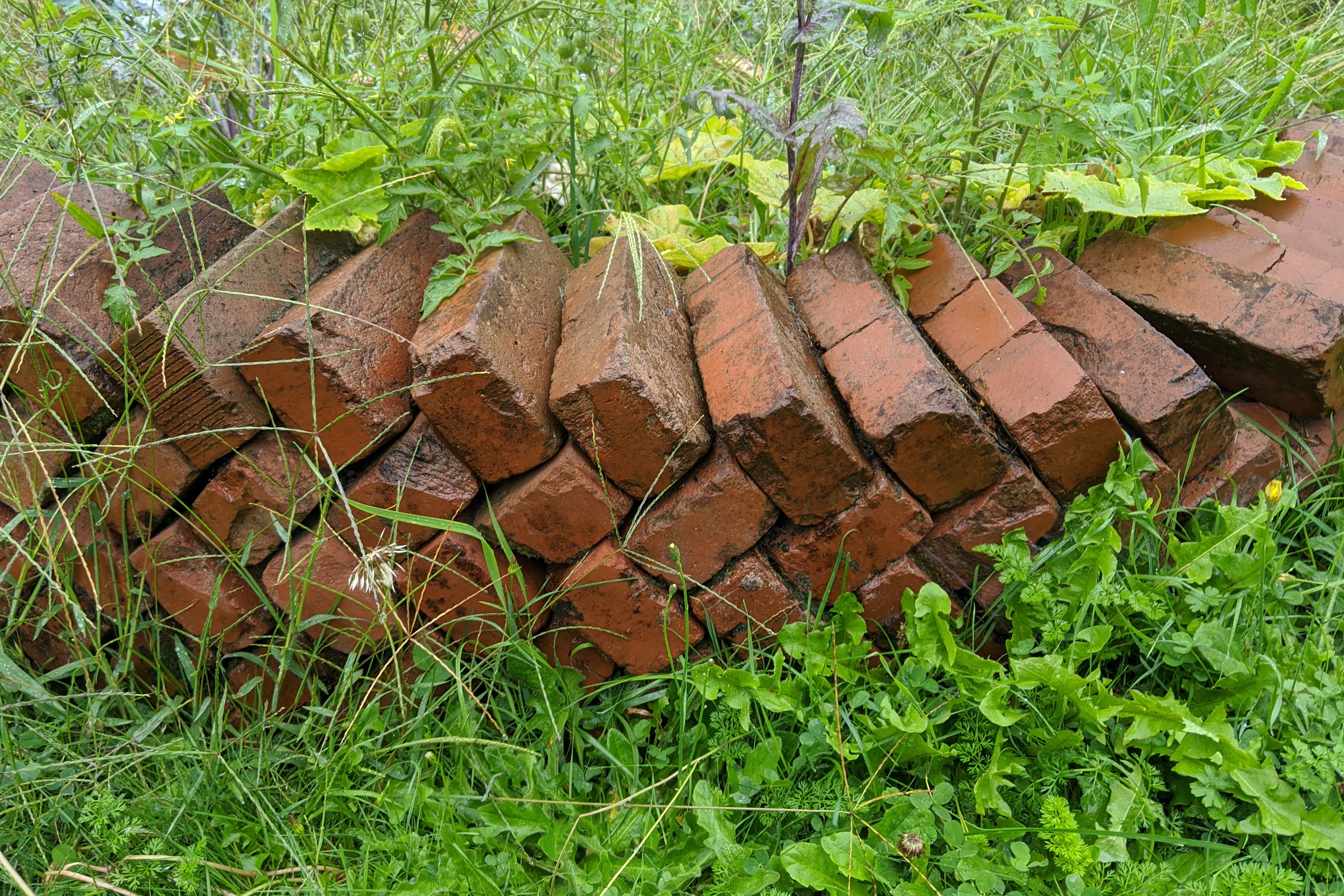 We continued down the hill, looking for something else to explore. A few houses down we came upon a low wall of unmortared bricks arranged in a back and forth zigzag. Just beyond the bricks were several raised beds out of which grew a variety of vegetables. I wanted to see how many Idara could name. As we walked between the beds she was quick to name the tomatoes and the cabbage. We grew a lot of both last summer and the summer before. She named the peppers, too, and the parsley. The eggplants, though iconic, were harder for her. The nasturtiums had now lost their blooms and so blended in among the green. Most of the others—beans and onions, kale and beets—were past the prime of early summer, but they were still struggling along, ripening their fruits and swelling their bulbs. In a few short weeks they’ll be gone, harvested and turned under by their keepers or else left to rot in the rain.

This has been a summer of naming. Naming the victims of police violence: Breonna Taylor, George Floyd, and many others. Naming the emotions that sweep over us like waves as the pandemic stretches on without end. For several reasons, I’ve taken an interest in trying to memorize the names of plants. One, it gives me an opportunity to connect with my brother, who has worked as an arborist for the past ten years. I’ll snap a picture of a tree or a leaf or a pinecone and text it to him. “What’s this?” A few minutes later he’ll text back: “walnut.” It’s not much, as far as connection goes, but I’ll take it. I also want to know the names of the plants because I’ve heard that children are better at recognizing corporate brand names than they are at recognizing plants. I couldn’t find proof to back this up, but it’s so self-evidently obvious that I don’t even need a study to convince me. The surprising thing would be if it weren’t true. Finally, identifying plants harkens back to what must have been one of our first forms of knowledge: “What’s this plant? And if I eat it, will it feed me or kill me?”

This forces me to consider the fact that everything in the grocery store, save for a few exceptions, is edible. Pick anything off the shelf that has even a whiff of edibility and you can be certain that eating it will leave you unscathed, perhaps even nourished. What if the majority of items in the grocery store were inedible? And that a small portion could kill you?

I digress. Idara and I were naming plants and resisting the temptation to feed our mouths along with our eyes. Eventually we moved on down the street and the adventure transitioned from naming plants to collecting leaves. One of my favorite things about Idara at this age is that she sees leaves for what they are, which is to say that she sees them as gifts from above. But not gifts to her. She sees them as gifts that she can give to others. 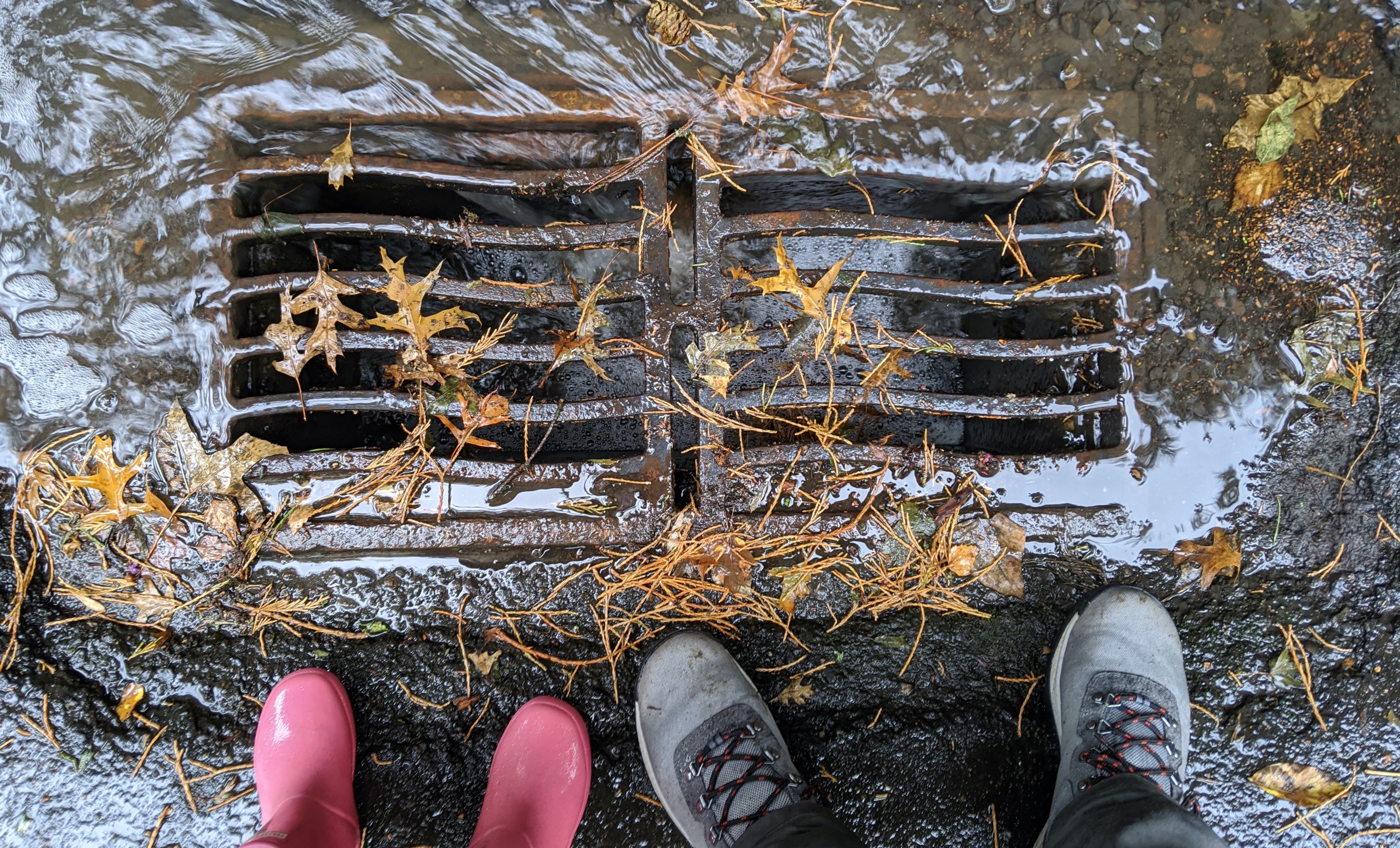 We walked further down the street. After stopping to unclog a drain2 we walked through a park on our way back to the house. We found a few more puddles for Idara (and me) to stomp in, and then continued our walk back up the hill. By now her pants were completely soaked through, as were her socks. We found a ripe and earthy apple lying beneath a tree and took turns taking bites of it as we sloshed home.