Idara at Two and a Quarter

If you wondered whether or not I’d continue writing these updates every three months, well, here’s your answer. In fact, you can look forward to reading about Idara at six and a half, at ten and three-quarters, and probably even at fourteen (which I’m sure will be a great read).

Idara may not be a teenager yet, but sometimes she acts like one. Before, she’d often say “no” when I asked her to do something, and then promptly do it anyway, as if “no” were just a fun word to say and not an indication of her intentions. But now she means it.

She’s also taken to throwing things. This morning I told her that if she wanted some of my Fruit Loops then she’d have to finish her banana first. So she picked it up as if she were about to hold up her end of the bargain, and then threw the banana across the room. And the other day I told her that she couldn’t have anymore toothpaste on her toothbrush, so she tried to throw in the toilet. She missed.

Playing in the water at the Portland Children’s Museum.

This kind of behavior has led to some discipline here and there. We’ve put her in a few timeouts, but she’s so upset by them that it ends up feeling like we’re passing down a capital punishment for jay-walking. The best response, at least at this stage, seems to be either to ignore her if it seems like she’s searching for attention, or simply grab her hands and force her to do whatever it is we’re asking of her, like taking her dishes to the sink.

One thing we have going for us is that it’s literally Rachael’s job to teach parents how to handle their misbehaving children, so we can both be confident that whatever we’re trying probably isn’t going to mess her up too much.

Whenever we’re having a conversation, Idara wants to be a part of it. Not to voice her opinion – she just wants to understand. We’ll be talking about something and Idara will look to us with a confused face and make a sound like “huh?”

The other day I encountered a blind person while on a hike. I was telling Rachael about it until Idara cut us off: “Huh?” She looked to us for explanation. Rachael said, “Blind means that someone’s eyes don’t work. It means they can’t see.” Idara seemed satisfied with this and so continued eating her dinner.

If we’re talking about something she understands, then she’ll blurt something out to say so. If we mention Susan, who watches Idara on Wednesdays, Idara will say “Tia!” (which is what she calls Susan).

It’s fun to think about how many words she understands, and to know that even if we’re not talking directly to her, she’s still trying to follow along. And even better, she’s trying to understand. Perhaps our greatest journey is trying to make sense of the world, and we can already see it in Idara.

Idara’s still a bit of a tenderfoot, but she tries.

My sister, a veteran of three and a half potty trainings, told us that when Idara is ready, potty training is the easiest thing we’ll ever do. So even though we’ve made Idara aware of it (by getting her a potty and books about using it, and letting her watch us use the bathroom), we’ve tried not to push it on her. For a long time she treated it like a game, but in the past few weeks she’s started to put the pieces together.

The other day Gordy and Suellen and I were eating dinner with Idara when she got down from the table and said “New nappy, new nappy!” She wasn’t wearing one at the time, but it was clear that she wished she were. Before I could get one out for her, though, she’d plopped herself down on the little green potty in her room and started to whine. “Poopy! Poopy!” she said. 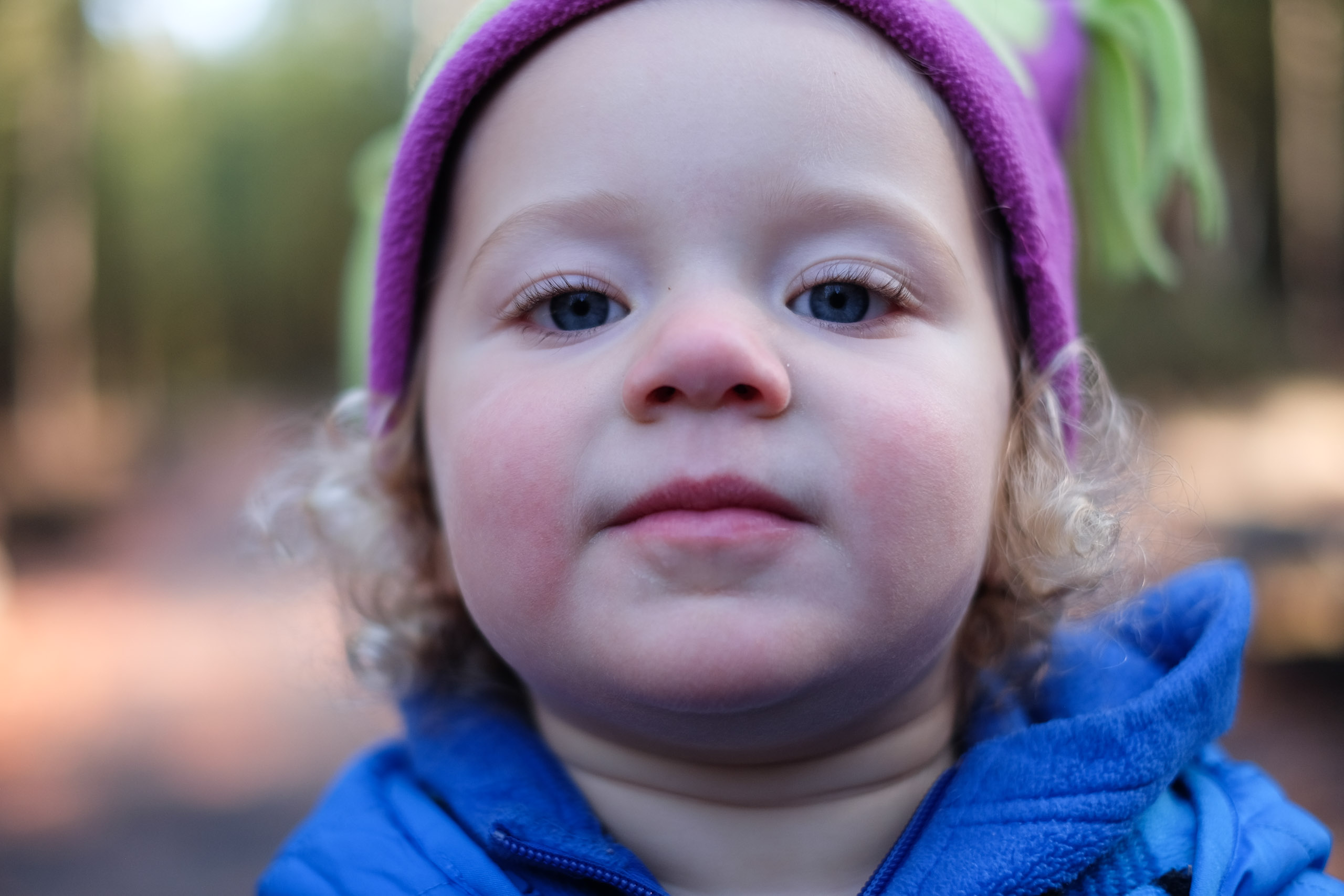 I love this picture. Neutral but confident.

I sat next to her on the floor and told her that if she wanted a diaper then we could put one on. I also tried to tell her that what she was feeling was normal and that this is how big kids and adults use the toilet (not on little green potties in the middle of their bedrooms, generally, but I think she got my point). Even though she seemed to hate every minute, she stuck with it.

It took almost half an hour, but eventually she’d done the deed and was ready to clean up. This turned out to be another struggle since I had to convince her that she wouldn’t make a mess when she stood up. In fact, she seemed buoyed by the fact that we ended up only needing one wipe.

Since then she’s managed half a dozen poops on the little green potty, and even a few on the toilet. She still requests that any onlookers say “Yay!” when she’s done, so I don’t think being a big kid has lost its luster.

Idara’s balance is improving, as is her sense of adventure. Going to the playground is a lot more fun since we can usually just turn her loose and let her climb up onto whatever she wants to climb onto. It’s a lot better than having to shadow her every move. 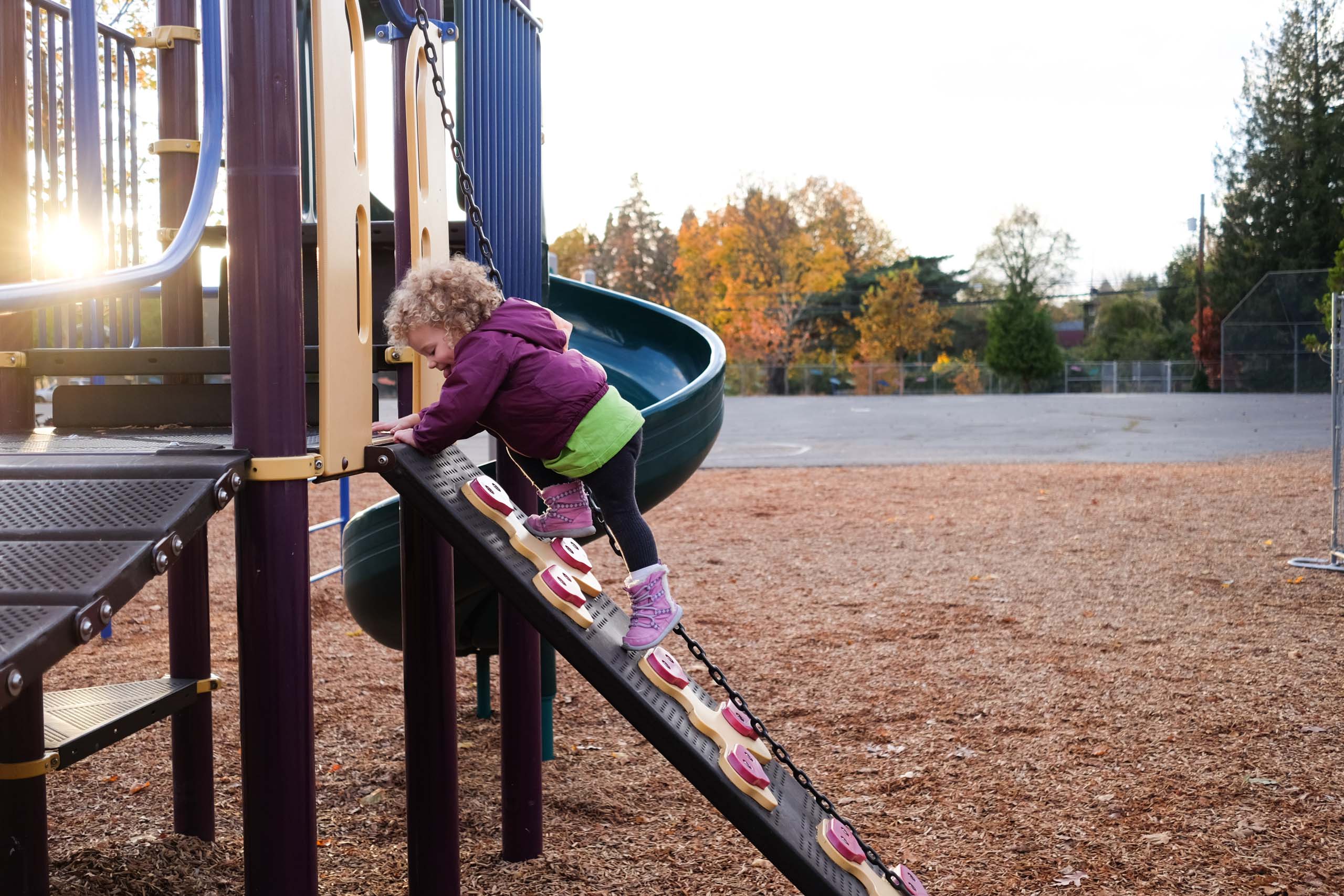 Idara climbing at the playground.

When Idara was one and a half we bought her a balance bike. The only time she ever seemed interested in it was when she saw me riding my bike, and even then it seemed too unwieldy for her. Now she’s taking it out more and more, and seems to sense how fun bikes can be. Yesterday afternoon she rode it along the sidewalk for half a mile, straight. Riding bikes was a huge part of my childhood and adolescence and so I’m excited to be getting her into it, especially at such a young age.

Rachael’s aunt, Susan, has been teaching Idara some songs. One of them (“Six little ducks that I once knew…”) has been stuck in my head for days. Another one is the alphabet song. Idara sings at all the time, but especially when she goes to sleep. Rachael or I will sing her a song, like “Sweet Baby James” or “Blue Spotted Tail,” then we’ll lay her down to sleep. Then Idara kicks off her own singing, sometimes continuing on for half an hour or longer. She’ll loop through the alphabet song (always skipping L through P), then count to ten, and then go back to the alphabet song. On and on and on.

For the longest time, Idara said “thank you” in sign language, with a open palm lowered from her lips. I’m not sure why, but some signs have held on for the better part of a year, even as she’s replaced the rest of her vocabulary with words. Milk, orange, and bird were all signs for a long time. And thank you.

I love that whenever Idara doesn’t want to walk anymore I can just throw her on my shoulders. No stroller or backpack necessary.

When I served her dinner the other day I asked her the same question I (and surely every other parent) have asked a thousand times: “What do you say?” I expected to see her sign “thank you,” but instead she opened her mouth and said “fuck you.”

She meant to say thank you, of course, but the ‘th’ sound is hard. Figuring it was just a one-off, I asked her to repeat it, and she said it again, except with more enthusiasm. “Fuck you!”

This has been going on for a few weeks now. She doesn’t shout it out anymore, but she still says it regularly. Sometimes even under her breath, which is almost as funny as when she shouts it out. And depending on the context, it even works in place of ‘thank you.’ “Milk!” Idara says. “What do you say?” I respond. “Fuck you,” she says, quietly.