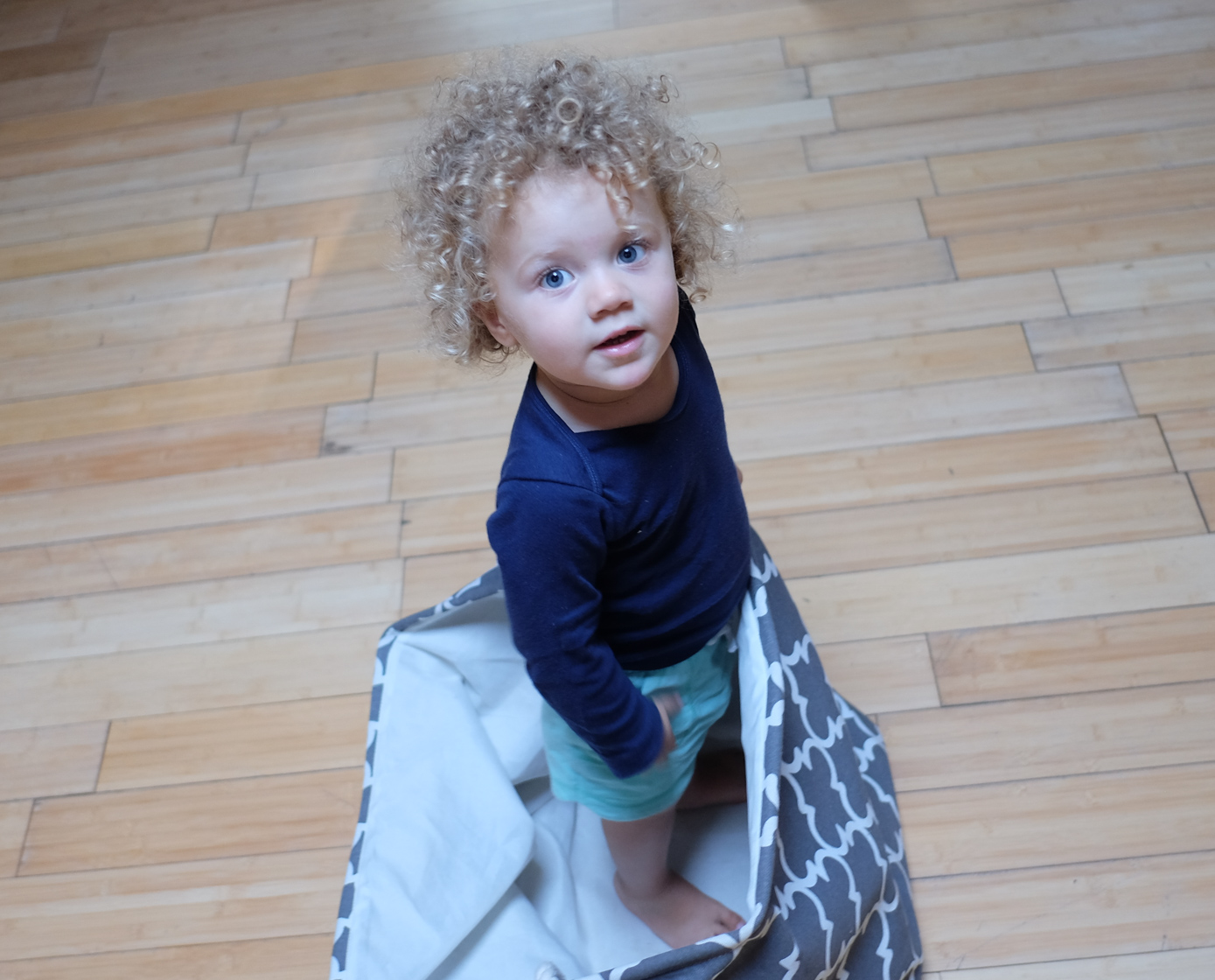 Idara playing in a laundry basket.

Shortly after Idara was born, she received a stuffed, knit doll as a gift from one of Gordy and Suellen’s friends. It sat around the house for a long time, more decoration than plaything.

A couple months ago, Idara decided that this doll was a part of the family. She’s started calling it “baby” and dragging it with her wherever she goes. And whatever we do to Idara, Idara does to her baby. She goes in the car seat and in the backpack. She gets drinks of water and snacks. She gets her diaper changed and sometimes she takes a nap. 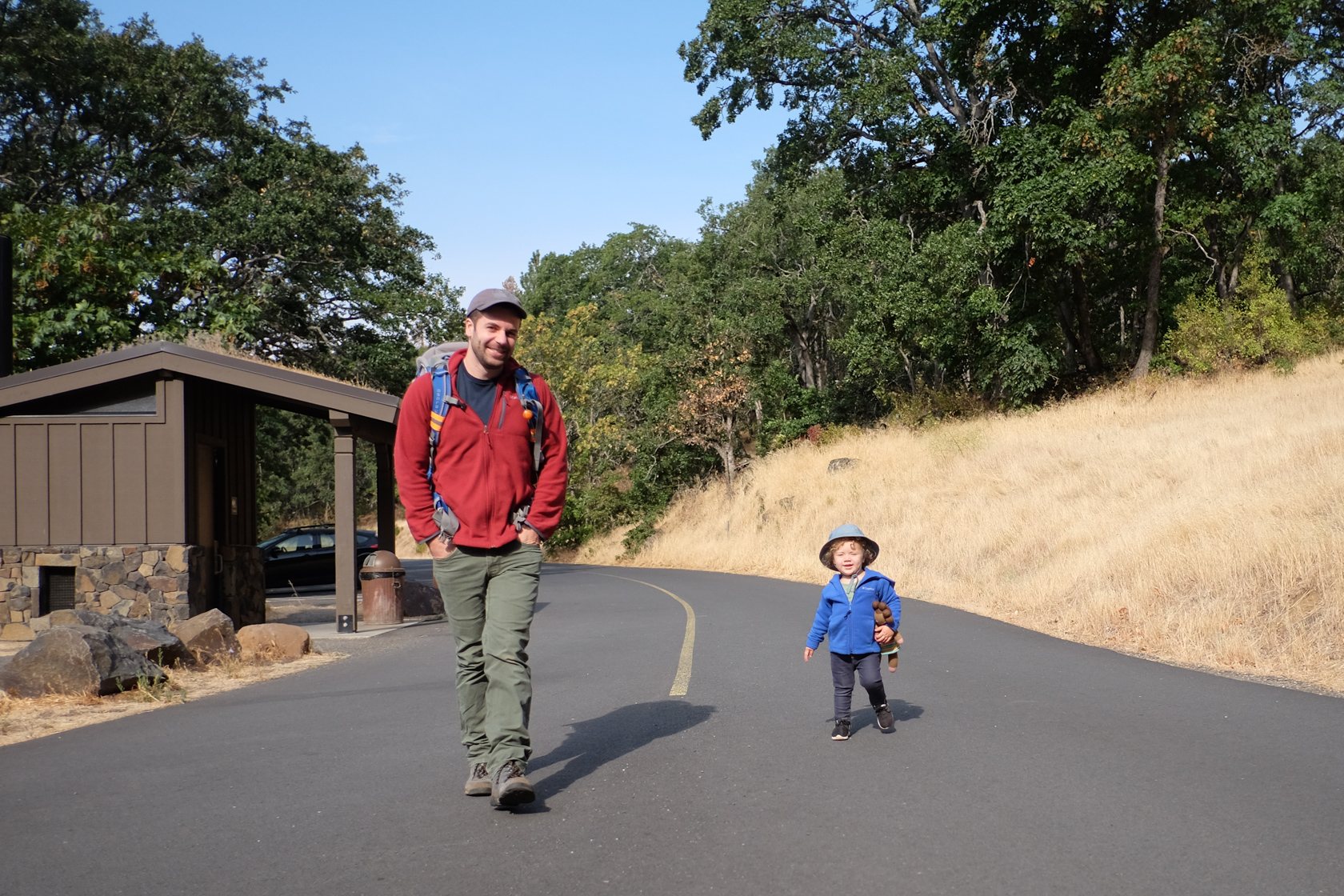 We took a hike up to Coyote Wall east of Bingen. I carried Idara, and Idara carried her doll.

Just now, a few moments ago, I made the mistake of putting Idara down for a nap without her doll. As I was closing the door, I heard Idara cry “baby!” and begin to whimper. So I found the doll in the stroller in the garage and hauled it in. Idara gave it a bear hug and laid down to go to sleep. Then as I was closing the door for the second time, I heard “banky.” Idara had her blanket, but the doll didn’t have hers. One more trip out, then back in, and Idara was content. Precious silence.

The past three months have been marked mostly by my absence. I’ve been spending my weeks interning in Hood River and then returning to Portland on the weekends.

On Sunday, as Idara is getting ready for bed, I tell her: “When you wake up, I’m not going to be here.” Idara always looks at Rachael and says, “Mama?” And I say: “Mama is going to be here, but Papa won’t be. Not for a few days.” I always wish that this will lead Idara to tears, but instead she says with a smile, “Bye Papa!”

The first time I was away for a week I was worried that she’d be distant when I returned. But instead she toddled over and gave me a hug. Each week has been about like that. I leave and return and we pick up where we left off. Still, I’m looking forward to next week, when I’ll finish my internship and move back to Portland.

A couple weeks ago Rachael dropped Idara and me off at the garden so that she could run some errands unencumbered. There were clouds, and rain was falling lightly. It was the first real clue that the seasons were changing.

There’s something magical about the onset of fall, and Idara’s arrival at this time two years ago will forever ingrain that belief. We wandered through the garden, stealing a cherry tomato here or a bean there, sampling the apples and pears that had fallen from the trees. Without exception, they all had little holes on the sides where bugs had burrowed in. 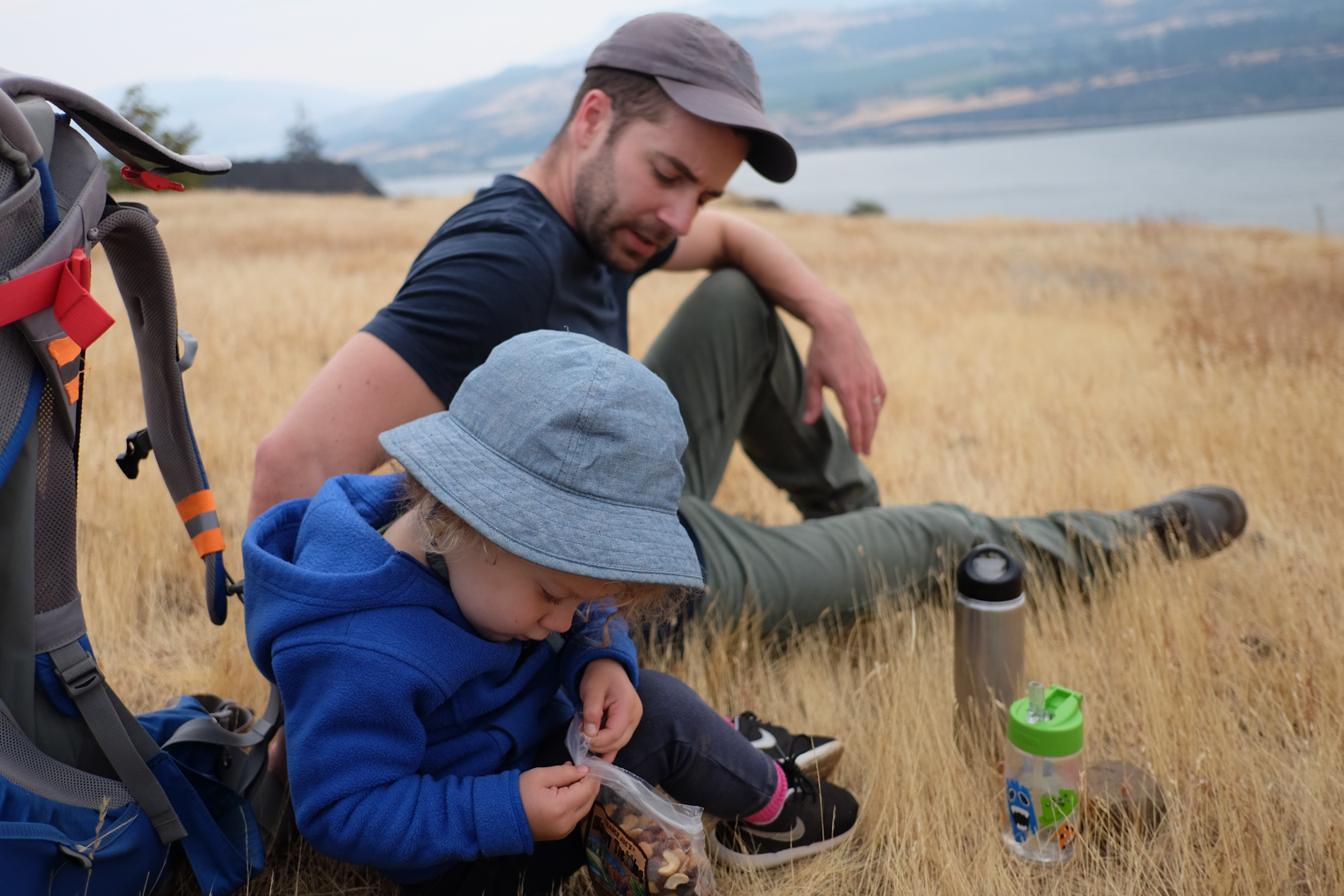 When we’re trying to get Idara to walk a ways on her own, we give her a chocolate chip every few hundred feet. Once she figures out how to get into the trail mix on her own, we’re ruined.

I told Idara that one way to tell that something is worth eating is if the bugs want to eat it too. For the rest of the day she presses her index finger against her cheek and then wiggles it across her palm. These are her signs for apple and worm, respectively, and two of the last ones she still uses. There was a time when she used fifty or sixty signs, but they’re quickly being replaced by words.

We have a book about emotions. There are pictures of kids smiling and crying and screaming and laughing. One day Idara pointed to the smiling kid and said “hap-ee.” Later that day, when Idara and Rachael were coming inside from playing, they found a hummingbird which had just flown into the sliding glass door.

Rachael gasped as the bird lay motionless on the concrete. Idara gasped too, began to cry, and ran to Rachael. It was hard to tell if Idara was upset about witnessing the aftermath of the bird’s violent collision or seeing Rachael upset, but she was clearly afraid. Suellen came over to try to help the bird as Idara clung to Rachael.

They watched as Suellen turned the bird over. It rose to its feet and stood between the three of them. Rachael talked Idara through what they were seeing. “The bird was hurt but now Mimi (Suellen) is helping the bird.”

They watched for a moment in silence and then saw the hummingbird fly up and perch on a nearby plant. Just then, Idara said “Ca-ca (bird) hap-ee!” It sounds like a simple thing, but it was striking to see how she associated the smiling kid in the book with the bird that had appeared to come back to life. And it must have had a big impact on her because for a week afterward she’d randomly turn to us and say, “Ca-ca hap-ee!” We’d ask, “Is the bird happy?” And she’d respond, “Yeah.”

I can’t think of another word for it, but this kind of “storytelling” is becoming more and more common. In August I borrowed a red car from our friends Jane and Joan. As I drove Idara home from my Mom’s house one evening, Idara couldn’t say enough about it. “Papa, rum rum (car), waif (red).” Then she’d pause for a moment, and say, “Mama, rum rum, back (black).” 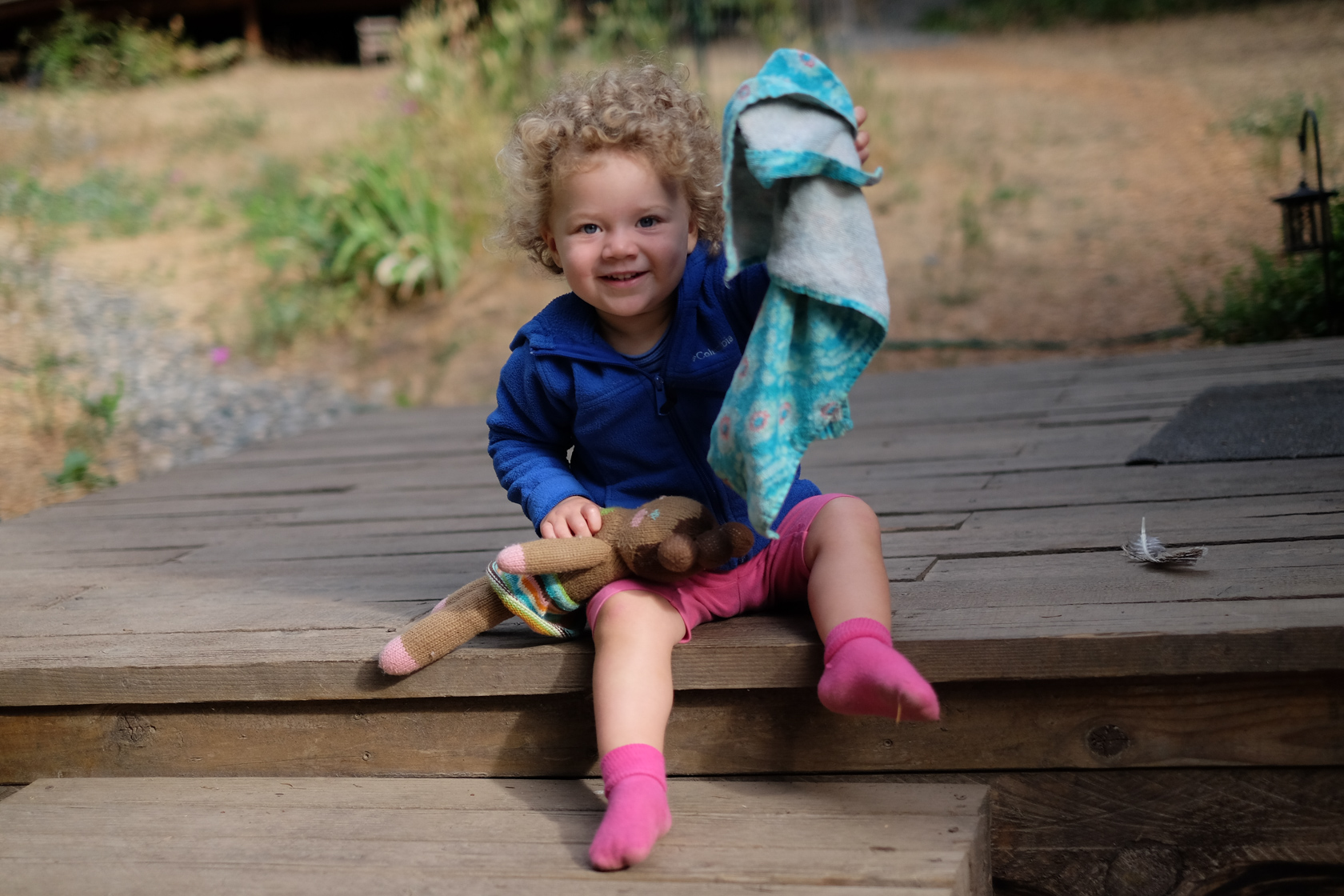 Sometimes she carries around a towel as a blanket for her doll, and it always makes me think of the cardinal in The Hitchhiker’s Guide to the Galaxy.

In the moment, it’s easy to think that she’s just a mirror, reflecting the world around her but not actually recording or internalizing any of it. But several weeks later we woke up to Idara talking to herself in her crib, “Jane, Joan, waif rum rum.” She’s looking around and making sense of the world and communicating her understanding, and I can’t get enough of it.

More Than a Mirror

From Idara’s birth up and to just a few months ago, she remained a kind of well-known stranger. Our relationship was incredibly deep in some ways: her genes are our genes, after all, and let me tell you, we’ve been through some shit together. But in other ways, we barely knew each other. Unless something made Idara laugh or cry, I had no idea what she thought about it.

Now that she’s talking more and more, I feel like I’m finally getting to know her, one story at a time.