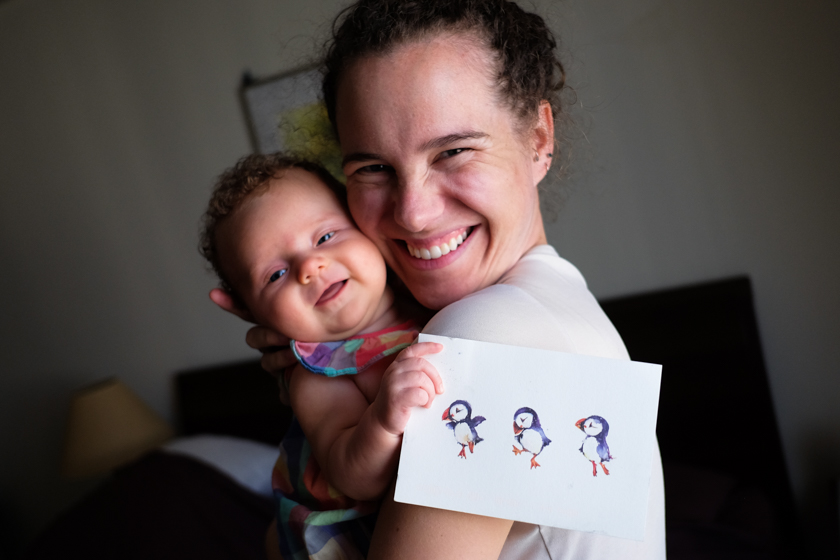 Rachael and Idara in our bedroom in Doha.

In my final post about Idara’s birth, Rachael and I were loading Idara into the car to drive her home, which at that point was Rachael’s parents’ house in Portland. I’d picked out some music to play — a song by Brandi Carlile aptly titled “Chained” — and Rachael and I proceeded to ball our eyes out thinking back on what had happened over the past week and a half. After spending a week in the hospital, seeing the outside world brought a kind of whole new world feeling, and in addition, it really was a whole new world. There were two of us when we drove up to the hospital, and now there were three. Simple math, sure, but sometimes the most incredible realizations are the most simple.

The first night was rough. And so was the night after that. Rachael and I were exhausted at the end of each day, but when we went to lie down and go to sleep it was really just the beginning of a whole new saga. Idara would only sleep for an hour at a stretch, and even then only in our arms. Rachael and I would take turns carrying her around or laying her on our chests, then the other person would sleep, usually for an hour or so, and then we’d trade off. I’m not sure what the science is behind it, but I think that if you’re only sleeping for an hour at a stretch you’re not really getting into the deeper phases of sleep necessary for true rehabilitation. I never woke up feeling rehabilitated, anyway.

Chris, my brother-in-law, said “you will be amazed at how little sleep you get.” It really was amazing. Not so much the total quantity over the course of the day, because Rachael and I could always hand Idara off to her folks when we needed a nap. No, the thing that I had not considered was how short the stretches of sleep would be. It must’ve been a month before I slept for longer than two hours straight. 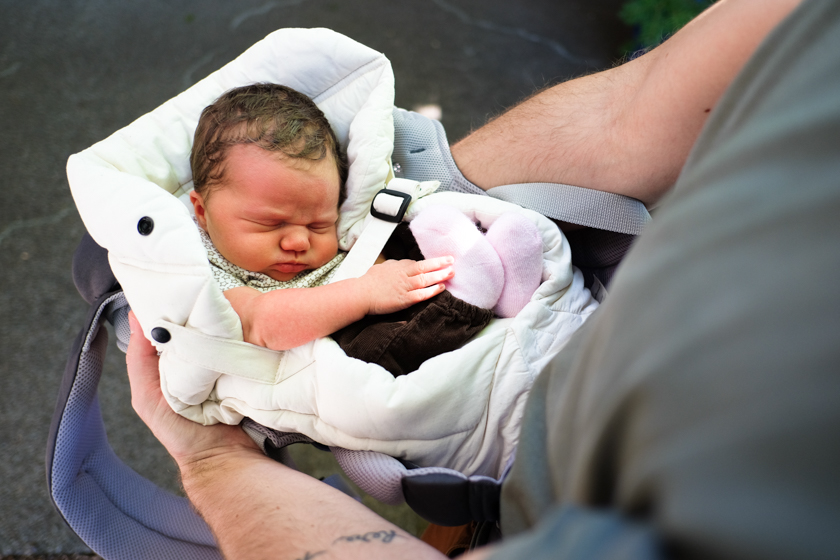 We started taking Idara for walks in the neighborhood as soon as we brought her home from the hospital. She’s five days old in this picture. I still get a little weepy when I look at it.

A few days after we brought Idara home we took her in for a checkup with Dr. Parker, who we’d met at the hospital when Idara was delivered. Everything looked fine, she said, except that hadn’t begun to gain weight since the birth. This wasn’t abnormal, especially for a preemie, but it wasn’t to be ignored, either. “I don’t want you to be worried,” she said, “but this is something you’re going to need to focus on.”

And so we did. A few days later we met a lactation consultant at Doernbecher Hospital. She was much more direct than Dr. Parker, and didn’t mince words. “Idara’s gaining about 25 grams a day, and she needs to be gaining 50.” We didn’t have any reference point for whether breastfeeding was going well or not, so this was our wakeup call. I spent the rest of the day driving around town picking up supplies, including a hospital grade rental pump, herbal supplements, and special, more boob-like bottles. We also got some surgical tubing that we could use to drip milk into her mouth when she was feeding, and a little plastic syringe so that we could keep her from becoming to reliant on the bottle. 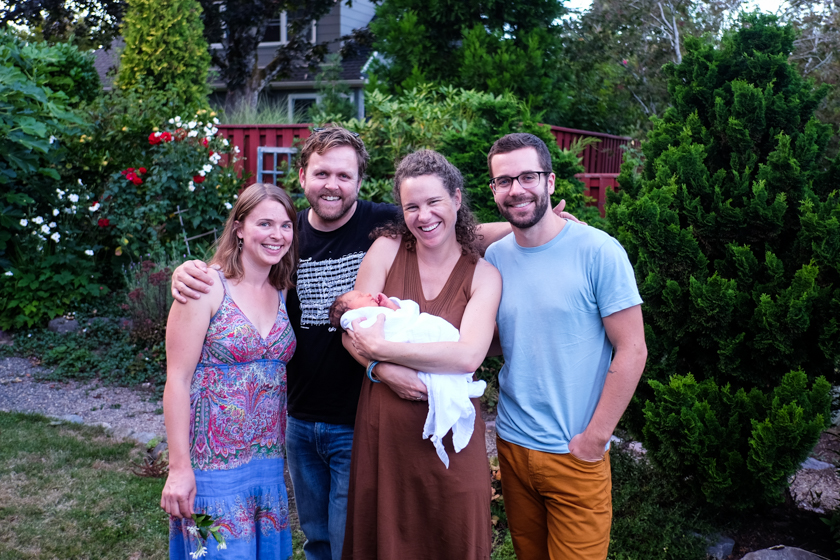 Our good friends Mike and Liz drove all the way from Bend just to see Idara.

I started tracking the time and duration of each feed and we made a plan to weigh Idara on a regular basis at a great baby store in Portland called Milagros. They have a scale that you can come in and use for free. This was especially helpful because we’d often get wildly different weights on different scales, even at the same clinic and only a few minutes apart (which is crazy, especially when a few ounces can be the difference between a baby hitting growth targets and losing weight). Using the same scale each time helped us keep better track of her weight.

At this point, about a week after Idara was born, Rachael was feeding her every two hours and then using a breast pump immediately after she fed. I’d take the milk Rachael had pumped and feed it to Idara in a bottle. This went on day and night, and felt like a full-time job. By the time Rachael had finished feeding and pumping and I’d finished the bottle feeding, we only had about an hour before we had to do it all over again. And that was actually when things were going well. Often times Idara would be unable to latch on, or once she was she’d fall asleep. Sometimes she’d latch on for a few minutes and then pull away wailing, drawing such tension that I’d have to leave the room and just hope that I didn’t hear her screaming.

Needless to say, the stakes couldn’t be much higher. It’s not like Idara would starve to death if she were unable to breastfeed, but the health benefits from breastfeeding are numerous, significant, and well-documented. And anyway, it was our plan and we were going to see it through. 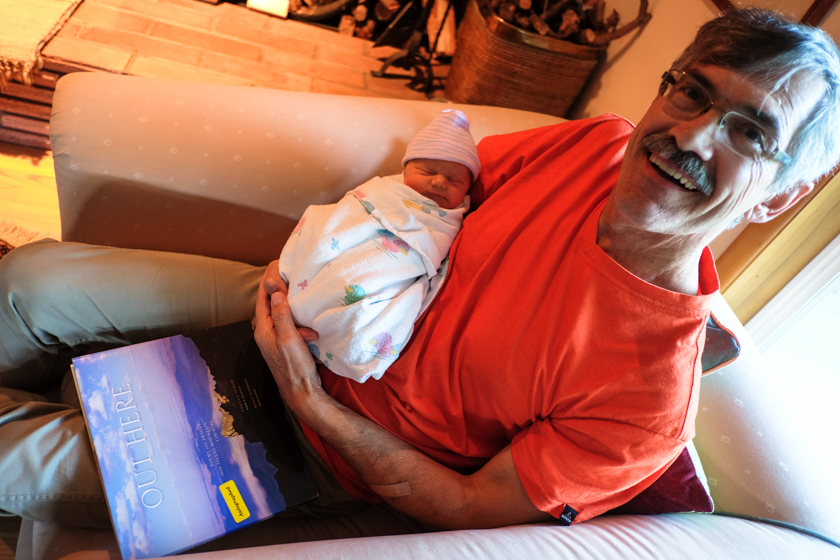 Gordy reading Idara her first book. He and Suellen were a tremendous help for us in the first few weeks after Idara was born.

We continued the lactation consultant appointments, we bought and read a book, we scoured almost every article there was to read on the incredibly extensive website Kelly Mom. Obviously there’s a lot to learn about breastfeeding, but I couldn’t help but think that we’d covered most of it. For a while I joked about becoming a breastfeeding consultant myself.

Everything we learned provided insight and potentially helpful techniques, but ultimately it’s a two-way street. Idara could only do what she was capable of, and at less than a month old and several weeks premature, she wasn’t capable of much.

As Idara’s due date approached, she finally started to figure it out. She latched better and more consistently, she screamed less. She gained weight faster and faster, and began to go longer between feedings. 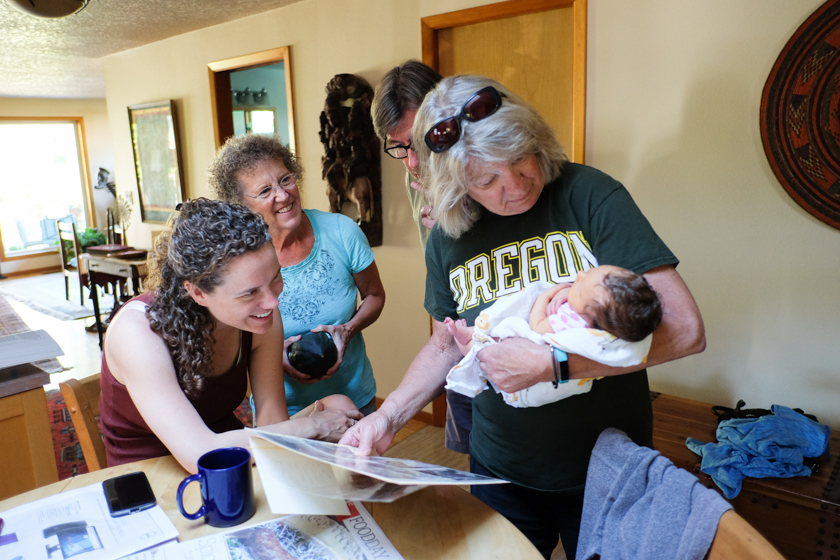 When Idara was born she was much bigger than most preemies of her gestational age, and it seemed to trick some of the medical staff we encountered into believing that she might not behave like a preemie. But the more we realized that she was actually born a little undercooked, the easier it was to accept that she would be a little slow to learn how to breastfeed. Maybe if she’d been born later breastfeeding wouldn’t have been as much of a struggle. There were many times when I felt like getting breastfeeding figured out was more difficult than pregnancy, and childbirth, and everything we went through at the hospital. And I wasn’t even the one doing it. I was just an observer and sometime assistant. Thankfully we had access to Northwest Mothers Milk Bank, an incredible organization which tests, pasteurizes, and distributes donated breast milk. We picked up about 15 ounces. While we probably could’ve gotten by without it, having extra milk in the freezer provided a nice security blanket.

Rachael said that her goal before returning to Qatar was to be able to breastfeed in public, and a few days before elaving Portland, she accomplished it. None of this is to say that breastfeeding is no longer a challenge — it’s just much less of a challenge than it used to be.

Now that it’s nearly December and Idara is approaching three months old, I feel like we’re finally starting to move past the “oh-my-god-we-had-a-preemie-what-do-we-do” phase. She still has some lingering jaundice that we’ll test again in a few days, but besides that, we’re enjoying getting to know our daughter. She grunts less, coos more, and is even starting to smile. Here’s to the next three months.