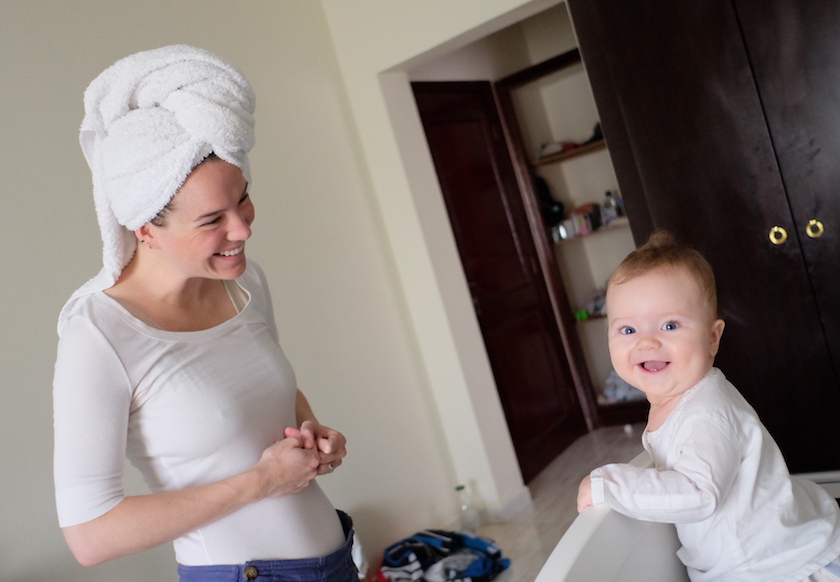 One morning when I went to help Idara from lying on her back to sitting up she decided to stand up instead. Now she always wants to stand.

Idara and I are in the waiting room at the doctor’s office waiting for Rachael. She’s sitting on my lap. Whenever someone walks by she looks up and smiles. If they smile back then she coos, or makes a little sound with the back of her tongue that sounds like a snake hissing. Rachael and I are both a bit introverted but we’re starting to wonder if Idara is going to be our opposite. Fear of strangers will probably come eventually, but for now she’s everyone’s friend.

At six months she was just beginning to try solid food. We started with banana and she acted like we were trying to feed her dirt. She still gives us the same face each time we try a new food, but she’s a good sport and reluctantly swallows it down. A few bites later she can’t seem to get enough of it, locking her eyes onto the spoon and opening her mouth wide even if it’s still three feet away.

For a while she refused to use her own hands at all, sticking them out to either side like a scarecrow. Now she’s starting to feed herself, with help. We put food on a spoon and set it in front of her. She whines a little but then picks it up and drags it across her eyebrow, and nose, and cheek, and eventually into her mouth. She doesn’t really have the “close lips around spoon” part down yet, though, so she just chews on the spoon until a bit of the food makes it into her mouth and the rest falls onto the floor. We want her to be able to do things for herself, but right now it just makes a lot more work for us, especially when it’s time to clean up. It’d be easier to feed her in the bathtub. 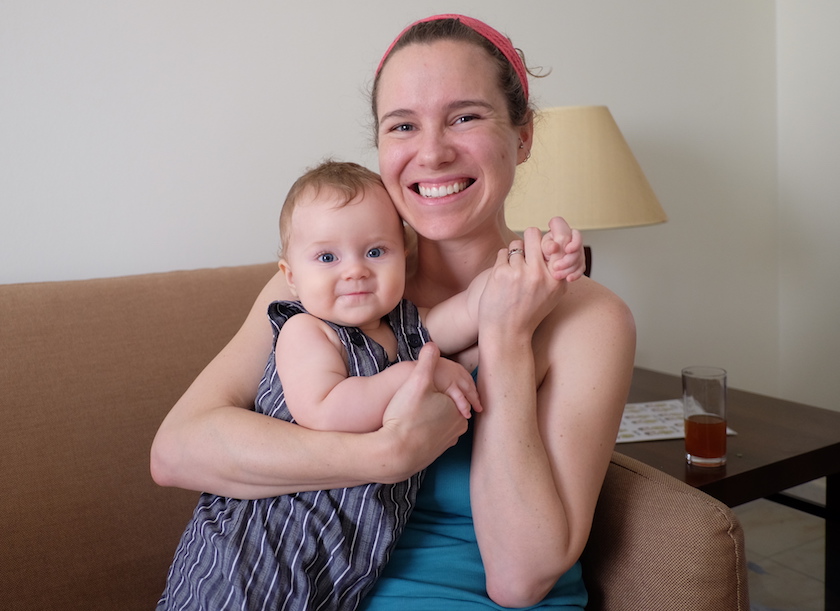 Idara’s hair is getting longer and lighter.

There are a few foods she’s supposed to stay away from, like honey, but besides that she’s tried a wide array: apples, pears, potatoes, peppers, prunes, tofu, yogurt, salmon, cucumber, zucchini. And on and on. When she tried peanut butter for the first time we gave her a tiny bit and then waited for her to go into anaphylactic shock. Thankfully, nothing happened.

At six months she was only sleeping for about thirty minutes at a time, though every once in a while she would surprise us and go longer. That was okay for a while but eventually we got tired of spending ten minutes getting her to sleep only to have thirty minutes respite.

So we read books, and blog posts, and we talked to friends and family. Nothing anyone recommended seemed to make any difference. Rachael and I did some serious soul searching about whether we were actually the problem, that we were coddling her too much or not enough, that we weren’t giving her enough opportunities to teach herself to fall asleep, or worst of all, that we’d missed some “learn to sleep” window that was closed and would never reopen. It’s easy to look back and know that we were overthinking it, but when you’re in the thick of it reason ceases to be a part of the equation. You’re just looking for anything that’ll work.

Nowadays it’s not uncommon for her to nap for an hour or an hour and a half, but there are plenty of crap naps, too. And sometimes at night, we go to war. Idara might start to cry around 10 and then Rachael will nudge me because it’s my turn to put down the rebellion. My weapons of choice are a comforting touch and, if necessary, a blowdryer for backup. I rub Idara’s belly, or her back if she’s sleeping on her side. I run my finger down her forehead to the tip of her nose. I tickle her ear. Sometimes none of it works because she wants something I can’t provide. And other times, she just wants to play. She’ll start talking to herself and singing. It’s adorable, and it’s also the worst.

Idara is finally starting to enjoy the pool.

We’re still taking her to the pool. She’s just as unimpressed by it as she’s always been, but she never cries, which gives me hope that she’ll be a good swimmer someday.

She seems to enjoy books, though more as a physical object than something that contains a story. She likes to hold them and tear at them and put them in her mouth. If she’s calm she seems to enjoy looking at the pictures, and seems to be recognizing and remembering some of the simple words. One of the Spanish books we read to her includes the line “Salta ranita, salta!” on every page. Even if we’re not reading the book she smiles whenever I say it to her. 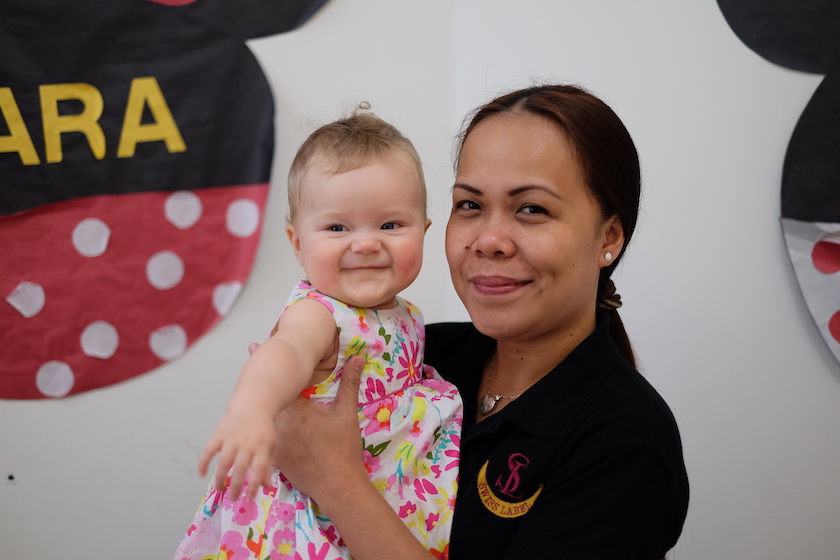 During the work week, Idara hangs out in the school’s nursery with Ivy. We hope to someday be as good with Idara as Ivy is.

Idara seems to have inherited my sensitive skin, mostly on her chest and underneath her diaper. The shelf close to where we keep her diapers looks like something an apothecary would maintain, full of balms and creams and lotions and oils. I’m used to it so it doesn’t bother me much, and it doesn’t seem to bother Idara either. But whenever we bring a new cream or lotion to Ivy, who watches Idara at school while we’re working, she sighs. We’re playing right into the overprotective American parent stereotype, but what can you do? Would that we all had perfect skin and never needed to do anything special to take care of it.

Rachael and I spent a lot of time around the house before Idara was born, but now we rarely leave. I wake up before them to work on homework, then we go to work, then we come home from work. We manage about one school night errand per week and we try to get out and do at least one thing each weekend, even if it’s just coffee. Thankfully our close friends Jake and Bethany had a baby shortly after Idara was born, so we can sit around for hours and just hang out and talk babies. I would’ve found that mind numbing a year ago, but it’s our life now, so I don’t mind it. 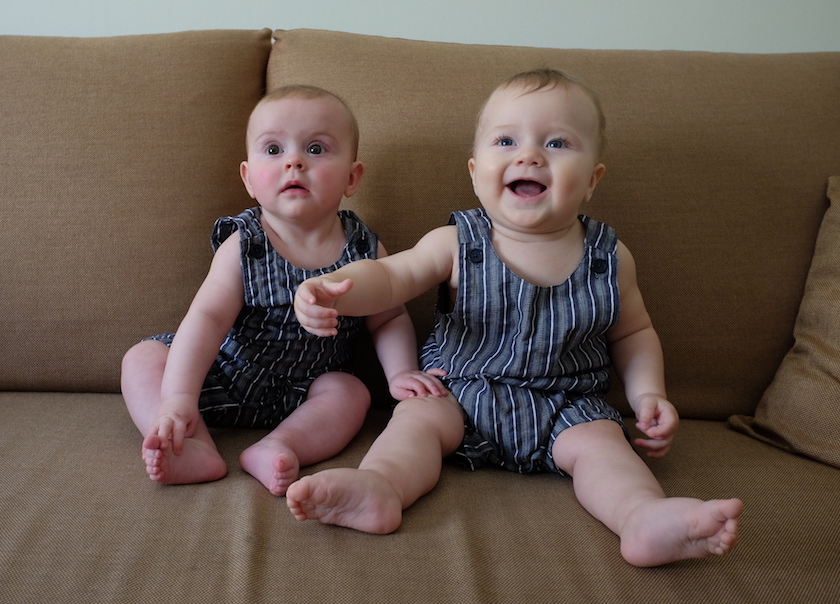 Our friends Jake and Bethany had a girl a few months after Idara was born. We got them matching kimonos (not sure what they’re really called) from MUJI.

I still like to sit around and cook up new nicknames. I’ve left a lot on the cutting room floor, but the keepers for the past few months are Boogie Smalls, Corporal Cat Nap, and Scar Face, thanks to a bad bout of eczema which popped up a few weeks ago. She always turns her head whenever I say “Idara!” but she also turns her head whenever I say “Toaster!” so now that’s catching on as a nickname too, for better or worse.