At 18 months, I wrote that Idara was beginning to develop opinions. Now, a few months later, she’s learning to express them.

One day I asked her if she could say “yeah,” to which she quickly responded, “yeeeaaahhh.” It was definitely a party trick at first, though, because even if she understood that it was the answer to a question, she rarely seemed to use it correctly.

A few days later she learned the word “no,” but like yeah, it seemed to be mostly a curiosity.

After a while she began to understand that yeah and no were two of the most powerful words she could learn, and she even began using them in the correct context.

Idara knows the people in her life. There’s me, Papa. Rachael is Mama. Rachael’s folks, who watch Idara two or three days a week while Rachael and I are working, are Mimi and Pepe. My mom is Mimi, too. And Rachael’s aunt Susan, who watched Idara one day a week last year and will continue doing so this year, is Tia. 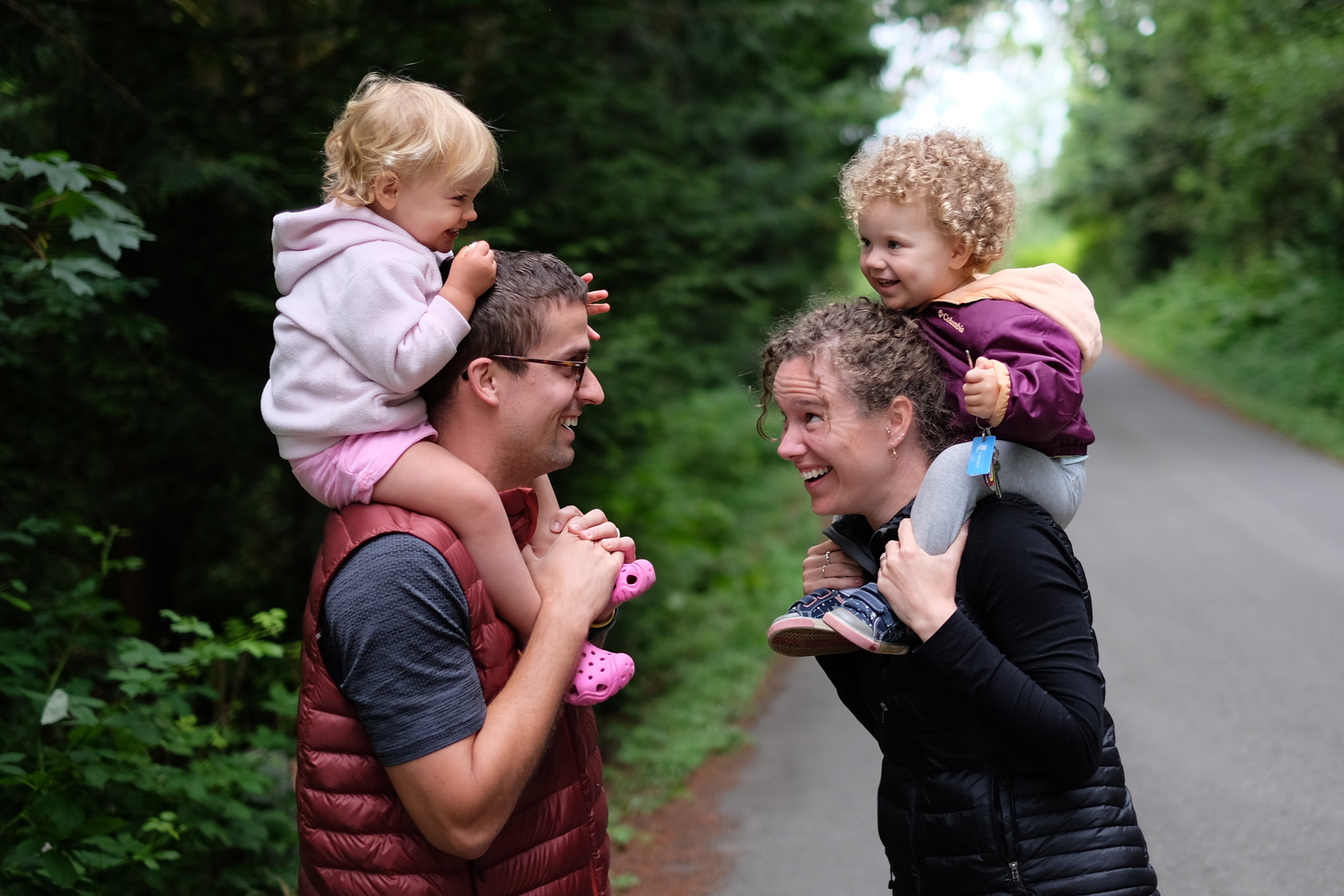 We spent a weekend on Bainbridge Island with some old friends from Qatar. Here’s Jake and Elsie and Idara and Rachael.

Our close friends from Qatar are Booboo and Jakey and Didi. She doesn’t see them in person much, but it always makes me happy when Idara can pick them out in a photograph.

Before having a child I’d assumed that children were essentially dumb adults, but it isn’t so. I’m constantly amazed at Idara’s ability to perceive and remember. God help you if you mention the word “cheese” without giving her any, or the word “park” without taking her there.

I remember hearing recently that children only need to hear a word two or three times before they remember it. And I suppose this makes sense. If kids are to having a working vocabulary of 2,000 words by the time they’re 6, there’s only so much time to spend on any one of them.

Other words we hear a lot of these days: tractor, choo-choo woo-woo (train), mea (like a cat’s meow), go, pool, hi, bye, banana, pasta, peez (please) mama, peez papa, peez pepe, peez mini. Idara will often come up to me, book or game in hand, and go through the list, knowing that she’ll hit my name eventually.

Idara is learning her colors and numbers, or should I say, her color and her number. She’s quick to point out when a shirt or house or car is blue, but ask her what anything else is, whether it’s red or brown or pink, and she’ll say that’s blue too. And when she picks up two of anything, with one in each hand, she quickly says that there are two. But hold up one finger? “Two.” Show her three strawberries? “Two.” Ask her how many hats she’s wearing? “Two.” 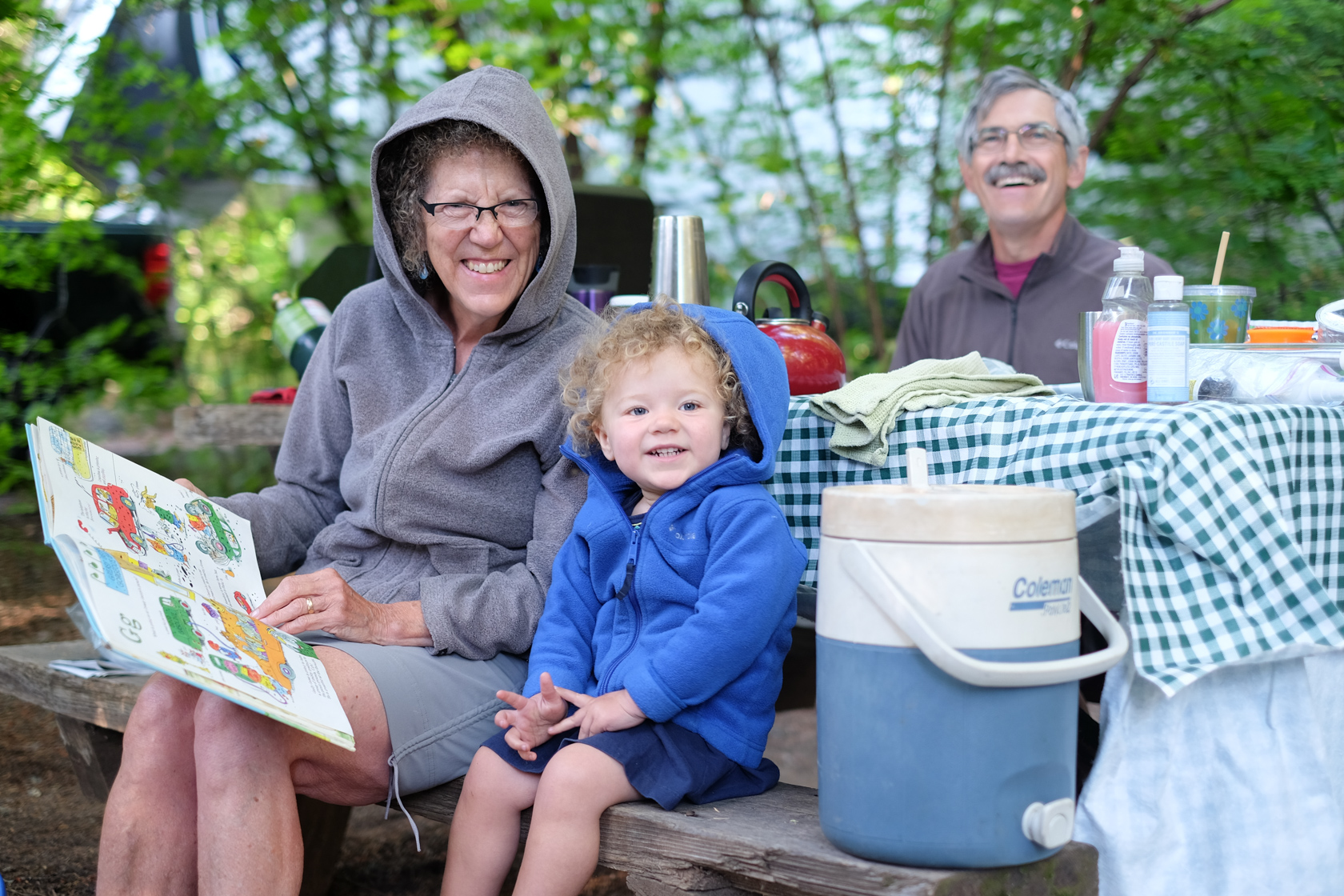 Camping with Mimi and Pepe.

Susan bought Idara a book about animal movements and then taught her all of them. Idara can waddle like a penguin and hop like a bunny. She can strut like a rooster and swing like monkey.

I often ask her to do them. Not only do I get to watch her doing something that’s absolutely adorable, but she also just looks so damn proud of herself. Still, I feel a pang of guilt that I’m training her to perform for people. What if she doesn’t want to waddle like a penguin, cute as it may be? 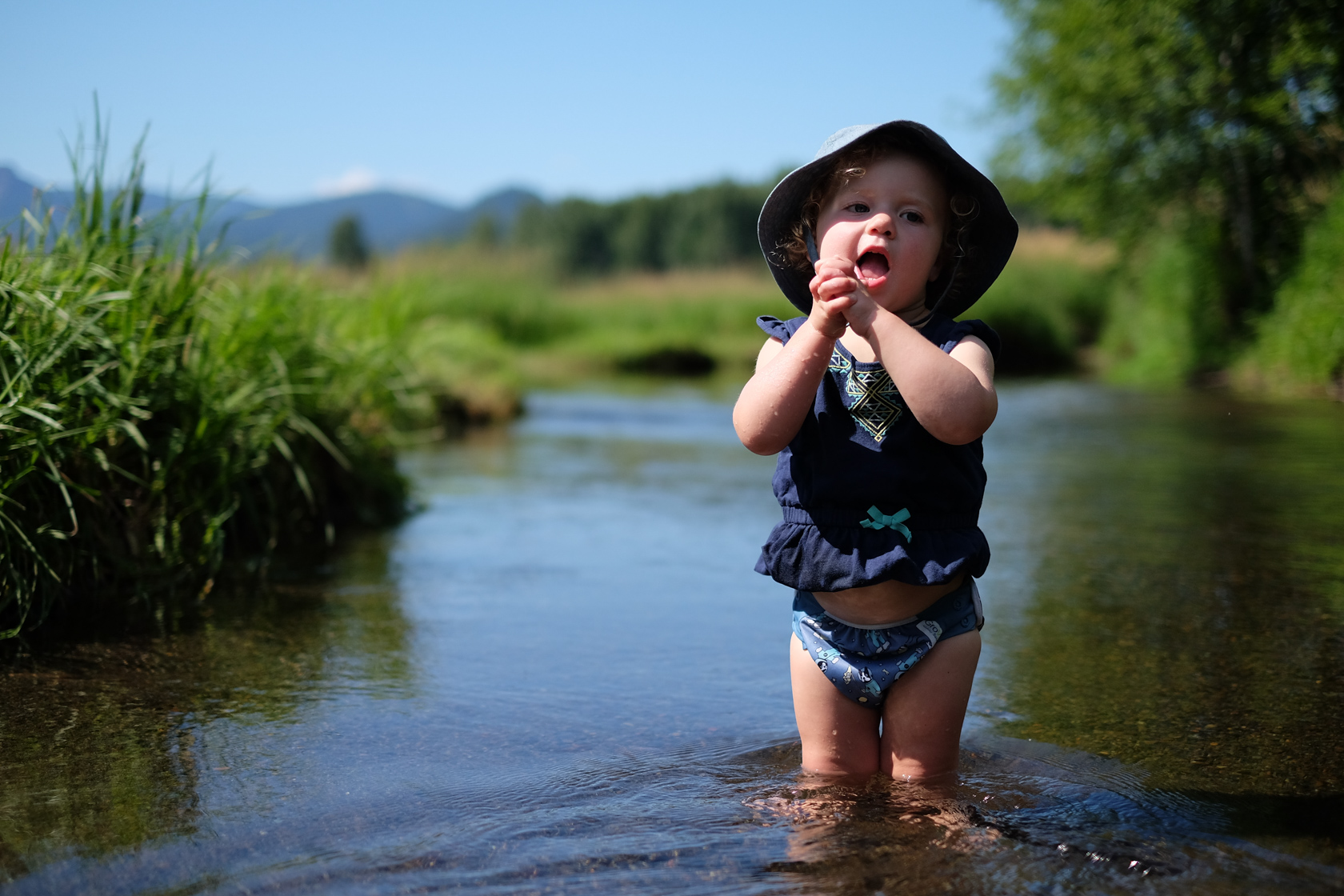 Idara in playing in a very cold stream in Gifford Pinchot.

Being an only child, Idara hasn’t had a ton of time to interact with other kids. But most of what I’ve seen so far has made me a little worried that she’d be easily pushed around. But when we spent a few days with our friends and their daughter, who’s a few months younger, Idara finally found something worth getting violent over. This other girl seems to really enjoy swinging her arms at things and people. I’m not forgoing the word hitting to be nice or diplomatic. It’s just that she never seemed like she was angry or doing it to hurt anyone. It was honestly like she was just exploring with her arms.

When eventually decided to swing her arms in retaliation, though, it was definitely meant out of anger. Rachael and I immediately looked at each other like “Whoa, who’s this baby?”

This immediately brought up the challenge of finding a balance between discouraging hitting and encouraging Idara to stand up for herself. We’ve settled on telling her to say “no” and walk away. Still, it’s hard to get too upset when we see her standing up for herself.

No, this is not what you think. Idara isn’t potty-trained, nor does she seem to be making much movement in that direction. Instead of focusing on potty-training, Idara has recently started getting out her diaper inserts (imagine a square foot of cloth fabric), taking them to random locations in the house, and then pretending they’re a bed.

She’ll toddle into the bathroom and grab an insert and then take it into her room, lay it out flat on the floor, and then lay down with her head resting on top of it. She’ll stay like this for a few moments and then she’ll go to the bathroom and bring back another one. Then she’ll lat that one down on the floor and put her stuffed animal on top. Repeat for the next few stuffed animals, and then she’ll lay one down and pat it and say “Mama,” and then again for “Papa.”

Before we’re done playing this game there’ll be half a dozen inserts laid out on the floor with Idara, Rachael, me, and all her stuffed animals laying on the floor pretending to take a nap, or something. Idara will sometimes get up and turn off all the lights in the room, too.

The best part is that Idara seems to think that this whole charades hilarious. She can barely contain the giant grin on her face.