A Dusty Box of Slides 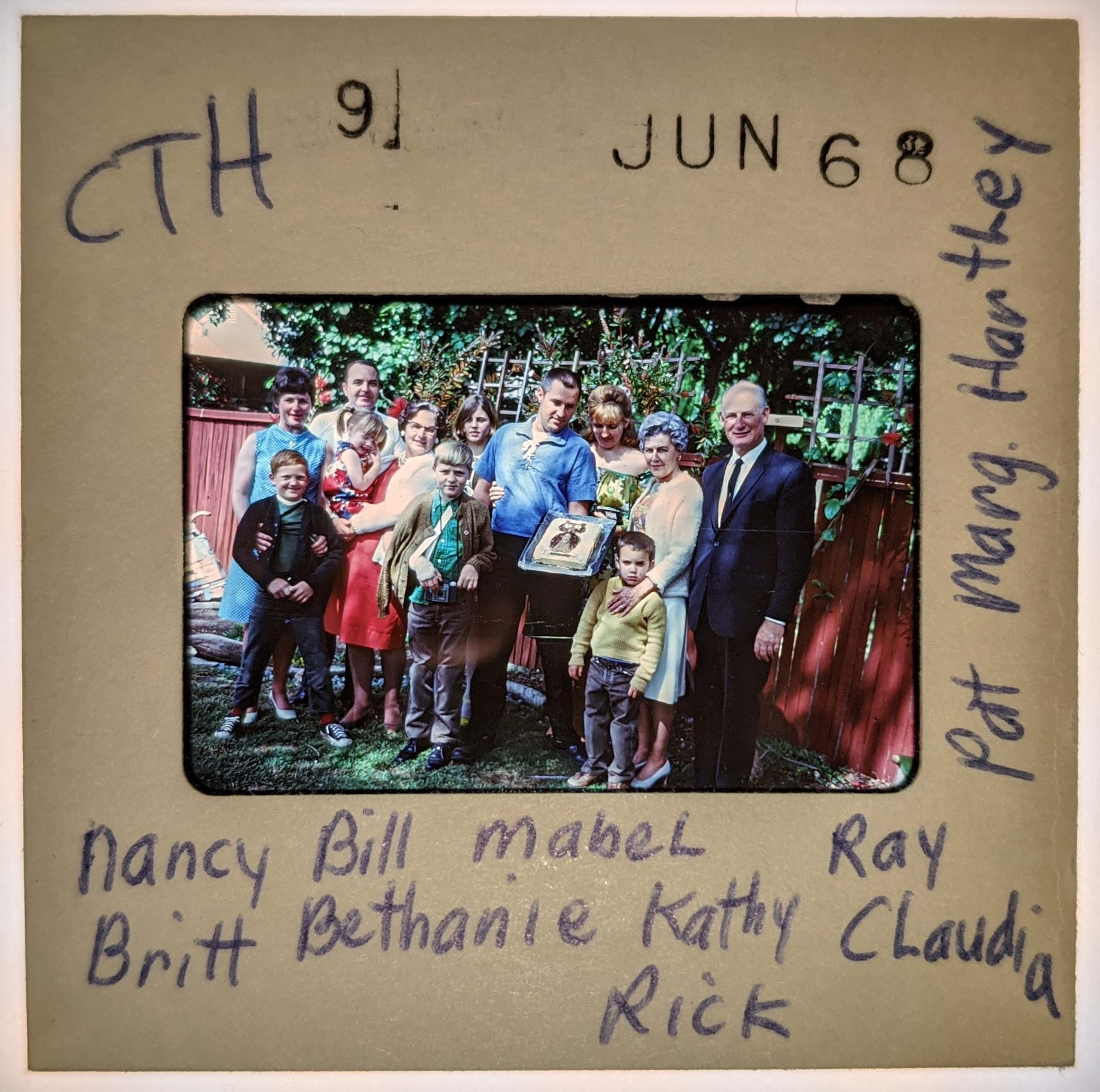 A few days ago I found a box of slides in my dad’s garage. I opened one up, picked out a slide, and saw a caption written on the cardboard holder: “CTH 9 JUN 68 Nancy Bill Mabel Britt Bethanie Kathy Claudia Ray Rick Pat Marg Hartley.”

Many of the names were easy to pick out. Rick is my father, Britt and Kathy are his siblings, and Nancy and Bill are his parents. Claudia is Nancy’s sister, and Ray is her husband. Mabel was Nancy’s mother – the only great grandparent I remember meeting. She lived in a small house in Burlingame, California. I remember that she didn’t have a dishwasher, and that her garden was filled with snails. I’m not sure who Bethanie, Pat, Marg, and Hartley are.

The date was easy to parse, too. In June 1968 Rick would’ve been about ten years old. And CTH must’ve stood for Claude T. Hall, Nancy’s father (my great-grandfather), whose oil portraits of Native Americans hung in nearly every room of my father’s house. Apparently Claude was a photographer, too.

Holding the slide up to the light, I could just pick out Rick in the middle, smiling with a blond bowl cut and an arm in a sling. He looked just like my brother, Forrest, who broke his arm when he was a few years older.

The slide was sharp and in good condition. Could the Montgomery Ward projector, which I found next to the slides, still cast its image? For all I knew it hadn’t been switched on in decades. I plugged it into the wall, turned a switch, and heard a loud fan wind up. A moment later I saw a bright yellow rectangle displayed on the inside of the garage door. I inserted the slide, turned the focus knob, and then there they were, large and illuminated, these nuclear and extended relations, several of them dead and gone, and the rest 52 years older.

By traditional standards, it’s not the best picture. Rather than being square with his subjects, Claude stood off to the side. The people on the right appear larger than those on the left. The man in the black suit (Hartley?) has been cropped at the ankles. Several people are looking into the sun, and only a few are smiling. Others are looking down or off to the side.

Even so, it’s sharp and not too dark or too light, and more importantly, it’s alive. Alive because it’s slide film, which appears more vivid than a print or negative. But also because of their size. I’m used to seeing people’s image in miniature, on phone or computer screens, or in framed 4” x 6” prints. Projected onto the garage door, Nancy and Bill and Rick and the rest of them were now approaching life-size. Standing and facing them, we almost saw eye to eye.

Perhaps even more moving was the fact that this representation of my family was physical and chemical. Fifty-two years ago photons had traveled a hundred million miles from the sun and then reflected off of their smiling and not smiling faces, traveled through a camera lens onto photographic film, and then finally collided with silver halides, fixing their images on slides for half a century or more. And now I held a box of them in my hand.

When a body is cremated we can hold their ashes in our hands. We know that it’s not really the person we are holding. Even to say that we’re holding a part of them is untrue. Which part, exactly? One might say that even if transformed by fire, we hold a kind of chemical memory, a facsimile, of the person we loved.

And so it is with these slides.1 I’ve looked at dozens of digital pictures of my Grandma Nancy since she died a two years ago. But this was the first time that I felt like I was really looking at her. She looks much younger, of course, but she’s alive in a way that I don’t feel like a digital camera, with its binary, algorithmic reduction, can capture.

If you’re expecting this story to devolve into a celebration of film over digital, of analog over algorithm, you’d be mistaken. It’s not lost on me that I’m composing this on a computer and that you’re reading it on a computer (or phone, or tablet), too.

It’s also true that for the first time in years I feel the desire to capture images of people I love on something that, in the end, I can hold in my hand. Maybe these yet-to-be-captured slides and negatives will be resigned to a box in the garage someday, too. And then maybe, someday, someone will haul them out again.