What the Ancient Indians Knew

In the eighth and ninth chapters of The Crest of the Peacock, George Gheverghese Joseph turns his attention to the mathematical history of India.

Is it possible to prove that a culture was numerate without seeing their numbers? Such is the case (and question) with the Harappan civilization, which occupied the Indus Valley of modern Pakistan from 3000 to 1500 B.C. Because the Harappan script remains undeciphered, it’s impossible to know what represents a number and what might be a letter or word, or even whether the symbols represent a written language at all. So are there clues of their numeracy?

Joseph suggests that two discoveries are indicative of the mathematical achievements of the Harappan people: 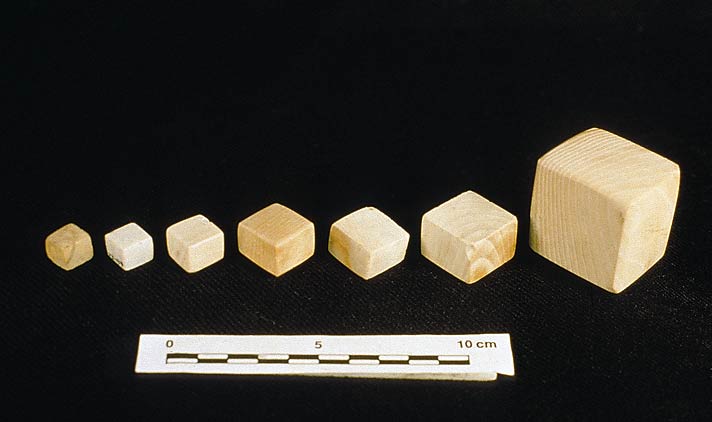 Cubic weights made from chert discovered in what is now Pakistan. Photo courtesy Harappa.com.

Perhaps the findings above, which were unearthed as part of archeological investigations, are simply the product of coincidence. Then again, these units of measurement have been found throughout the former Harappan territory, which stretched hundreds of miles, and across 500 years of their civilization. It seems plausible that these measurement devices are the remnants of a standardized system of weight and measure, which would have been dependent on a numerate society.

Geometry in service of religion

The Vedic period, which spanned approximately 1500 to 500 B.C., followed that of the Harappan civilization. The Vedic religion is now seen as a precursor to Hinduism, or as an ancient part of the Hindu religion itself.

Ritual played an important part in the religion, particularly the fire worship, or Agnicayana ritual. The preparation for this ritual involved the creation of sacrificial altars with specific shape and dimension which were said to please their gods.

Needless to say, achieving these requirements would’ve created a strong incentive for geometric exploration and learning, especially since some of the altar designs were quite intricate, like the Mahavedi, which contained within it the shape of a falcon. According to Joseph, “Its base had to be constructed to precise dimensions if the sacrifice was to bear fruit.”

The prescriptions for altar construction, which come from the Sulbasutra texts, also show early knowledge (though no formal proof) of the Pythagorean theorem, Pythagorean triples (right triangles whose sides all have integer lengths), and of approximating square roots to a high degree of precision. For example, they were able to approximate √2 to five decimal places.

Here are the three main entities of our number system:

As I’ve discussed in previous posts, these entities have existed individually at different points in history in different parts of the world. The Mayans, for example, used a positional system with zero, but used base 20 instead of base 10. The Egyptians, on the other hand, had a symbol for zero but did not use it in a positional sense. None of this to say that these three entities are required or ideal. After all, you could literally build the pyramids without having all three.

Solve for dot and color

Aryabhata, the Indian mathematician born in the fifth century, employed a positional number system in his works. And while he did not use a symbol for zero, some have argued that his awareness of the properties of the number can be inferred from his work.

While the Bakshali manuscript mentioned above contained some early algebra, it wasn’t until until the time of Arybhata that it came to flourish. An interesting feature that sets the math from this period apart from others was that mathematicians began to employ letters for unknown quantities, just as we do today. They also apparently used the dot as an unknown, and even the word varna, which translates to “color” or “class.”

One thing I haven’t talked about in these posts but which I find interesting is the lyrical nature of the problems recorded in ancient manuscripts. Rather than simply laying out something along the lines of “2x = 6, solve for x”, the writers lay out quite a scene. Here’s one example, attributed to Aryabhata:

O maiden with beaming eyes, tell me, since you understand the method of inversion, what number multiplied by 3, then increased by three-quarters of the product…

Here’s another, taken from the Ganita-sara-sangraha:

One night in spring, a certain young lady was lovingly happy with her husband on the floor of a big mansion…

If you’re curious about how this ends up as a math problem, well, you’ll just have to use your imagination.