One day at work I saw Yasmeen, one of my co-workers, writing in a MUJI notebook. For the uninitiated, MUJI is a Japanese retail chain that sells clothes, stationary, home goods, travel supplies, and a bunch of other things. Their stuff is plain, well-made, and best of all, inexpensive. They have locations all over the world, and Rachael and I have stumbled upon a few of them in our travels. I don’t often buy a lot, but I enjoy the hell out of whatever I do. I have notebooks, two kitchen timers, a toiletry case, and a bunch of origami paper.

To say I’m passionate about MUJI would be a gross understatement, so let me prove it to you. But first, back to the notebook. It turns out that Yasmeen got it at a MUJI in Kuwait, where she used to live. I thought the closest locations were in Europe, but not so. I told her that Rachael and I didn’t have any plans for our upcoming vacation, but she cut me off.

“Don’t go to Kuwait. There’s nothing to do there,” she said. From what I could gather, it would be sort of like taking a vacation to Omaha if you lived in Kansas City. Nothing against either of those cities, but maybe you’d want to see something different. Kuwait and Qatar weren’t that different, she said. I asked her again a few days later. “Nope, don’t go.” But MUJI! “Tell me what you want and I’ll get it for you next time I’m there.”

Honestly, there was no way Yasmeen could’ve hoped to dissuade me. I had a MUJI to visit, frequent flyer miles to burn, and no desire to spend nine days at home trying to get Idara to take a nap. 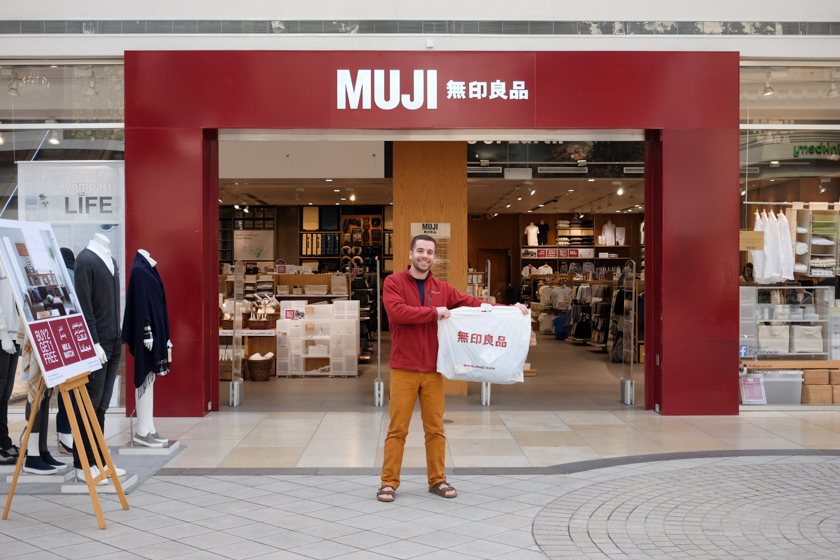 I’m not at all ashamed to admit that 90 percent of the reason we flew to Kuwait was to visit MUJI.

So, off to Kuwait. A short flight from Doha, friendly border control agents, and chicken fingers at Raising Cane’s (one of many, many American chains we’d see during our time there) before leaving the terminal and picking up our rental car.

Visiting MUJI came in the morning of our first day. We were standing outside the door when they opened. We were the first ones inside. There were two levels, each about the size of a tennis court. I started with a quick survey of the entire store and then I picked up a basket and returned to the front so that I could give each section a more thorough examination. First there was the travel trinkets. I picked up a folding toothbrush and a mesh pouch that I thought would be perfect for housing a camera lens. Then the suitcases and travel pillows. The suitcases were light and simple, but I don’t need a suitcase (and once you buy an eBag, neither will you). I tried on both types of travel pillows. They were soft and comfortable, but again, I don’t need a travel pillow. Then the stationary. There were dozens and dozens of types of pens, and as many types of paper. So many combinations! And then there was the white out tape, the staplers, the handheld paper shredder.

Then, when it seemed like my love for MUJI could grow no more, I found myself in the dressing room with a stack full of shirts and sweaters, all of which fit perfectly. Not ‘they have it in my size,’ perfect, but ‘they have it in my DNA’ perfect. I always have to buy shirts that are huge in the neck (now you know where Idara gets it from) and have them taken in at the chest. But not MUJI shirts. I’d never realized that I actually have the frame of a small Japanese man.

As much as I’d love to continue my play by play of each part of MUJI (The baby clothes! The timers! The fingernail clippers!), my editor is urging me to stop here, since all but the most devout mujirers probably stopped reading several paragraphs ago.

When it finally came time to pay, nearly two hours later, I felt like I’d been woken from a trance. Some plain brown paper calendars by the register caught my eye but I (by which I mean Rachael) was able to pull myself away. As we were leaving, one of the employees said to Rachael, “He really likes MUJI, doesn’t he?”

Of course, we didn’t just go to MUJI. We did a few other things, too. I took some pictures and wrote some captions to prove it. 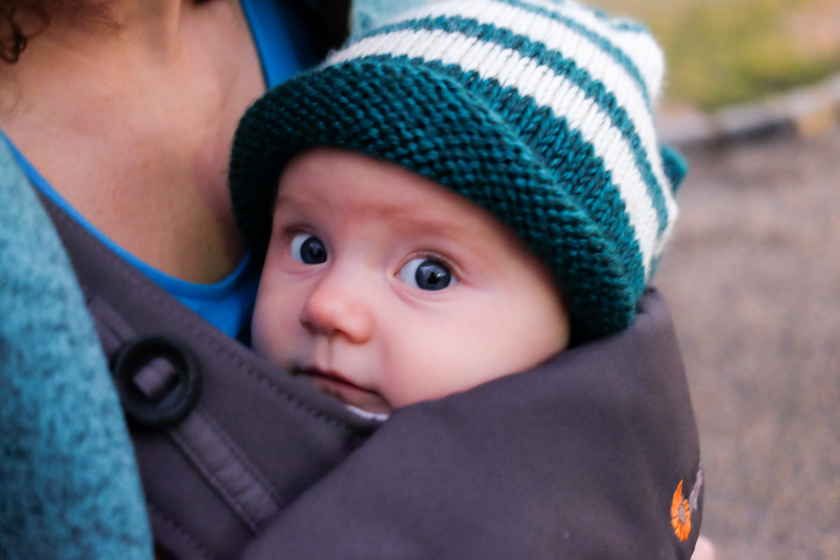 I never would’ve expected this, but Kuwait was cold. Like, Oregon cold. Thankfully Idara had this nice hat knitted by an old friend of ours from college. 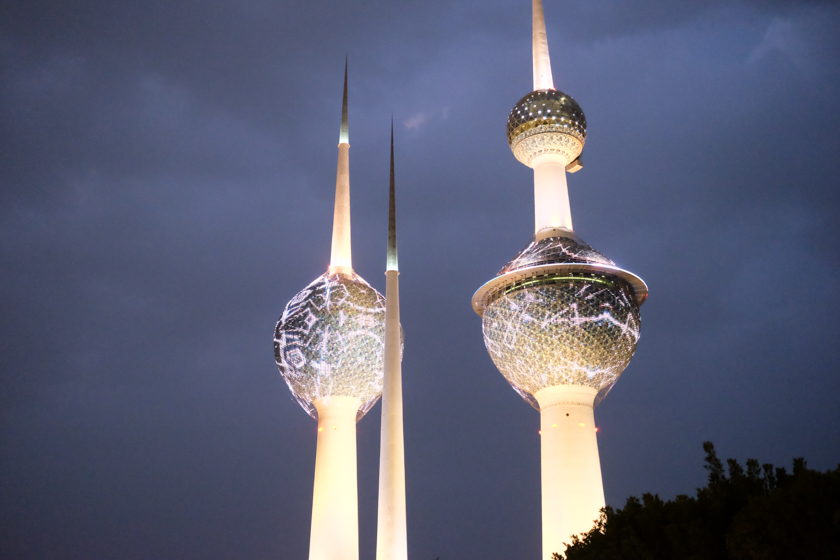 Used as target practice by the Iraqis during Desert Storm, the Kuwait Towers house a restaurant, an observation deck, and a 1.2 million gallon water tank. 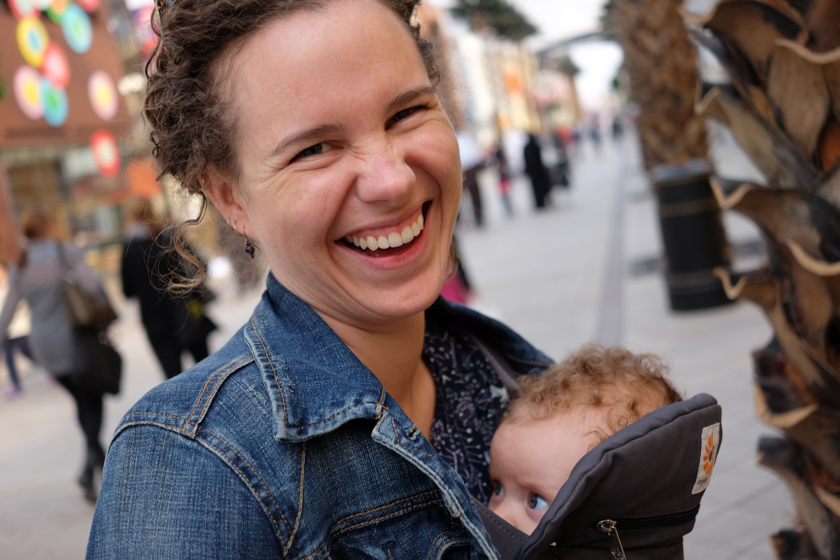 One of thee things we were worried about was how we’d get Idara to sleep while traveling. When we were in Thailand six weeks earlier, taking naps wasn’t a problem at all. But in the interim Idara had become much harder to get to sleep. Thankfully, she still slept fine in our ergo. 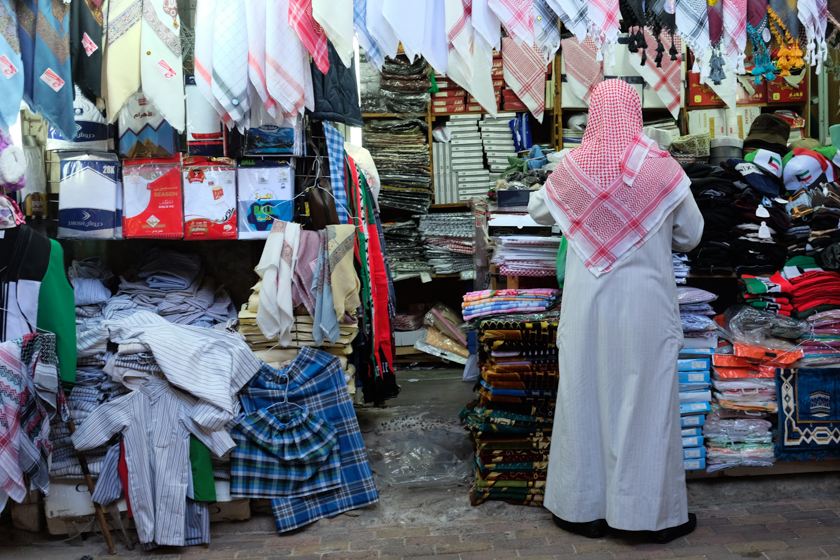 In many ways, Kuwait City looked just like Doha. I sat across from this goutra shop for a while and waited for Rachael to pick up our dinner.