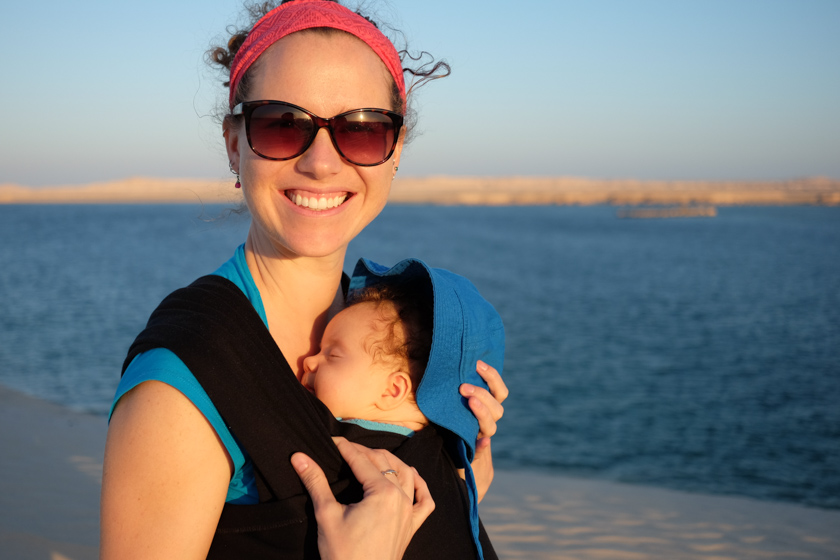 Rachael and Idara shortly after we arrived at the Inland Sea.

We joined up with a few other people and drove down to the Inland Sea, a kind of bay along the border with Saudi Arabia. The drive down is pretty tame, but you need four-wheel drive to make it, so we borrowed a very generous friend’s new Jeep. I drove with Rachael and Idara and her folks. Marc and Julianne brought their daughter in their car, and Danieal, Erin, and Keiron drove with Dan. 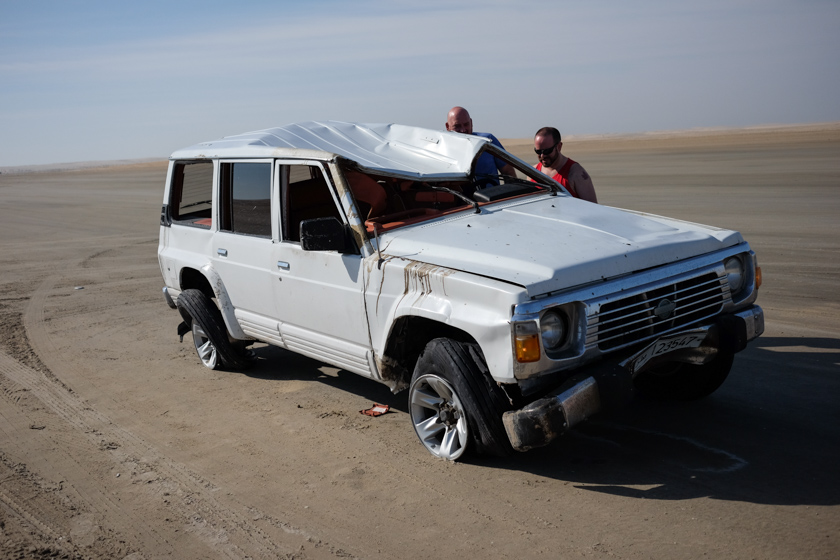 We saw this car coming off one of the dunes on our drive down. The roof had been smashed in, the tires were shredded, and it was leaking fluids. Amazingly, it was still running. When we found it the next morning, it had been abandoned.

When we arrived at the dune by the water where we usually camp, we saw that we’d have it all to ourselves. A few moments later, we realized why. The wind was blowing up and over the dune and sandblasting everything nearby. Rachael tucked Idara into a Moby wrap against her chest and put a sun hat on her. She was contented by that for a while, but before long she was fussy, probably because of the foreign environment we’d brought her to. 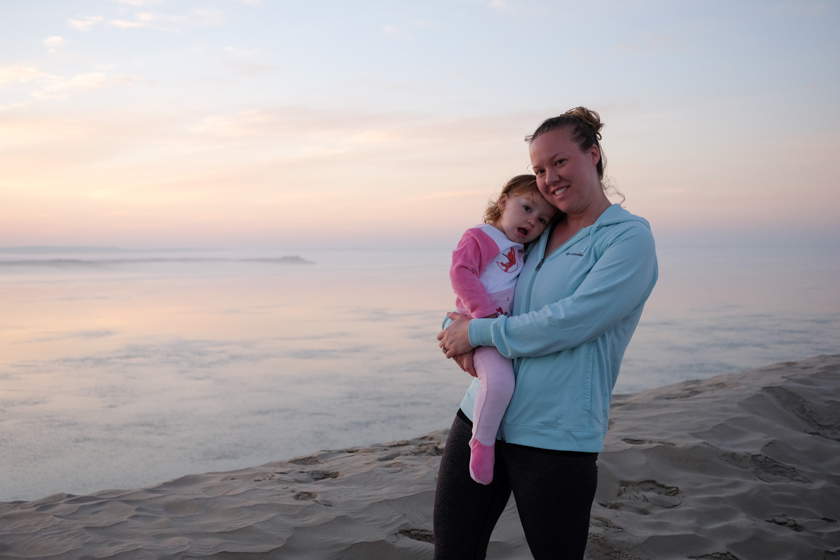 Two other camping companions: My co-worker Julianne and her daughter Miley.

For a while I considered surrendering to the elements and driving Idara and Rachael back to Doha, but eventually Rachael got her calmed down and fed and then the evening went much better. The wind died down and the sand wasn’t as bad. She slept for most of the evening and we took advantage of the peace and quiet and made a campfire with wood we’d scavenged from Doha. We cooked hotdogs over the fire and shared the food that others had brought, like pasta salad, bean salad, and nachos. Rachael brought some brownies she’d baked with her mom, and we roasted marshmallows, carrying on an American tradition in the heart of the Middle East.

The wind and sand were blowing again when it was time for bed, so Rachael slept in the back of Dan’s Pajero and I slept in our tent nearby. Idara had a decent night of sleep, considering the circumstances. 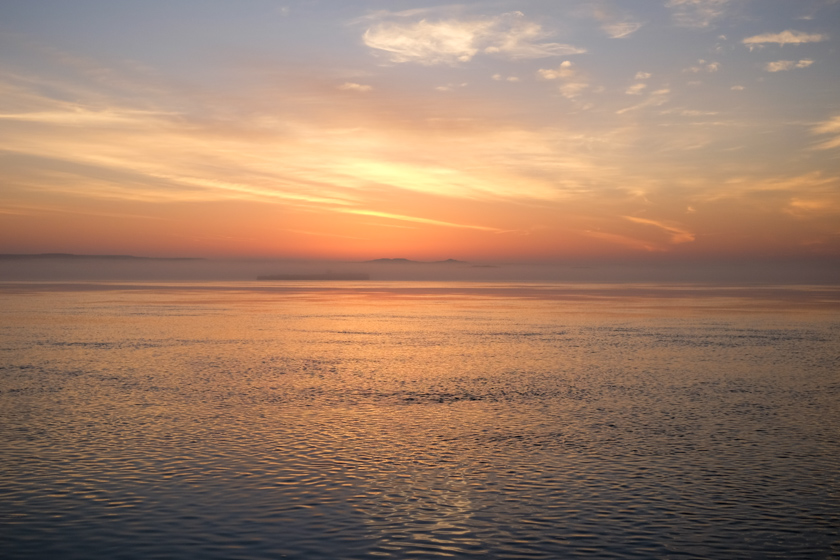 A calm sunrise looking out at Saudi Arabia.

By morning the wind had stopped blowing. The desert and the water nearby were calm and quiet and beautiful — which is exactly what first drew us out in the first place. As the sun rose higher in the sky and brought the temperature up along with it, we began to break camp and prepare for our return to Doha. 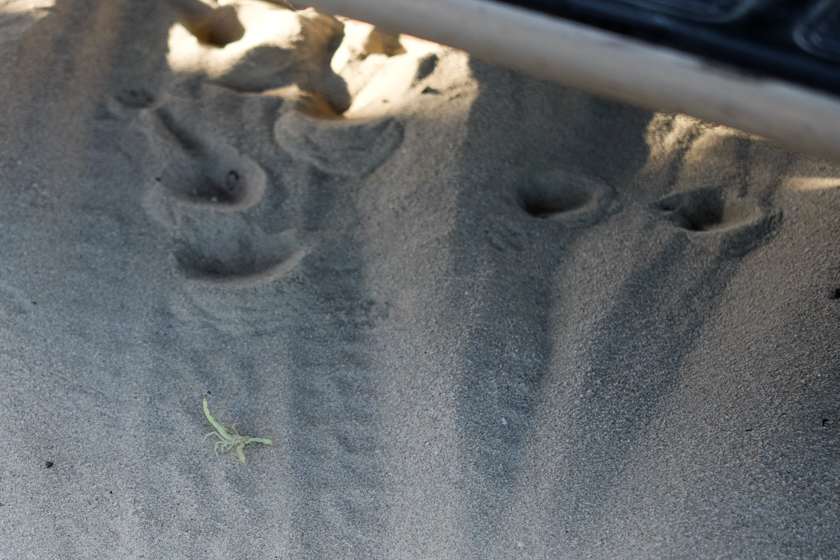 As Dan was dragging his tent toward his car, I saw a small, neon green creature scurry away. It was a scorpion! We didn’t have shoes on so we gave it a large berth as it ran toward the shade of Dan’s Pajero and crawled under one of his tires. I pulled out my phone to look up what kind of scorpion it was. The color and size were very distinctive, so it didn’t take long to identify it as a deathstalker. And in case you find the name ambiguous, the deathstalker scorpion is considered one of the deadliest scorpions. Its venom is unlikely to kill a healthy adult (although the pain is said to be acute enough that you’d wish you were dead), but a young child likely wouldn’t be so lucky. Luckily we only had two of those with us.

Now, I don’t think any of us were ever in much danger of being stung by this scorpion, and certainly not Idara, who was never within two feet of the ground. Still, it was a little unsettling to think about it being anywhere near us, especially underneath one of our tents. I’ll definitely be watching my step next time we’re in the desert.