For the past week we’ve been driving around Iceland with my dad and stepmom. We started in Reykjavik and explored on our own for a day and then picked them up and headed north on our lap of the island.

We spent our first night on the road in Borgarnes, a small town on the western coast. I’d been itching to get out of Reykjavik — pretty and quaint though it was — and see the natural beauty that Iceland is known for.

The one hour drive to Borgarnes didn’t disappoint. Once outside of the capital we saw mountains, green grass fields, and entire hillsides covered in blooming lupines. Besides the road we were driving on and a few scattered buildings, there was no real sign of civilization. No billboards, no strip malls, no trash — just great wide open spaces. And sunshine. 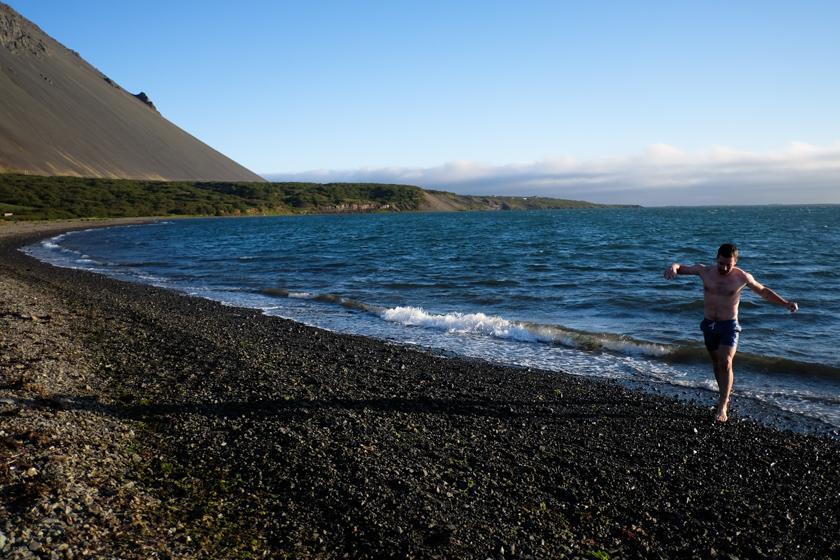 I’ll never pass up an opportunity to swim in the ocean, even if it’s on the edge of the Arctic.

The only less-than-perfect thing is that there’s so much sulfur in the water that whenever I turn on the tap I instinctively look around to see who farted.

After a swim in the ocean and a night in Borgarnes we continued to Akureryi in the northeast. Along the way, we stopped at a goat farm and a waterfall, plus anywhere we could find to pull off the Ring Road (so called because it circles the island) and take a picture. There are so many beautiful vistas in every direction in Iceland that sometimes it’s hard to know which one to choose to photograph. 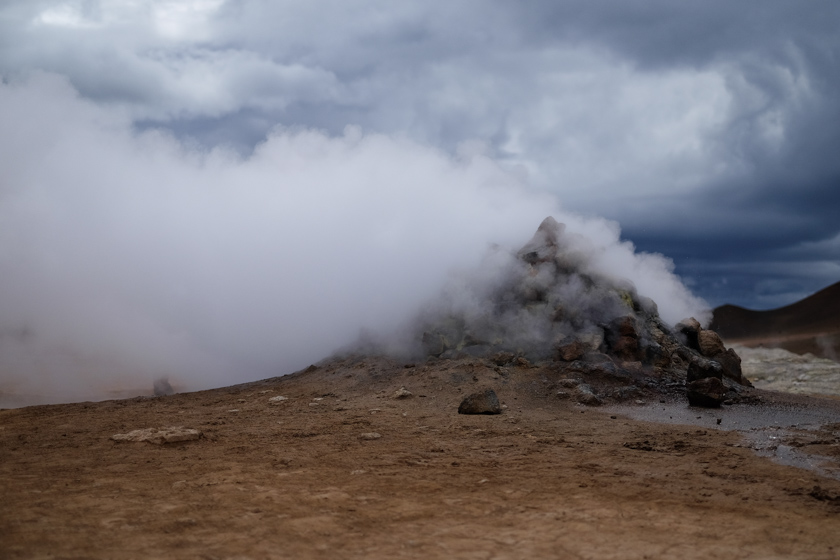 These steam vents on the side of the road made me feel like we were standing on top of a giant tea kettle. The steam was really shooting out. 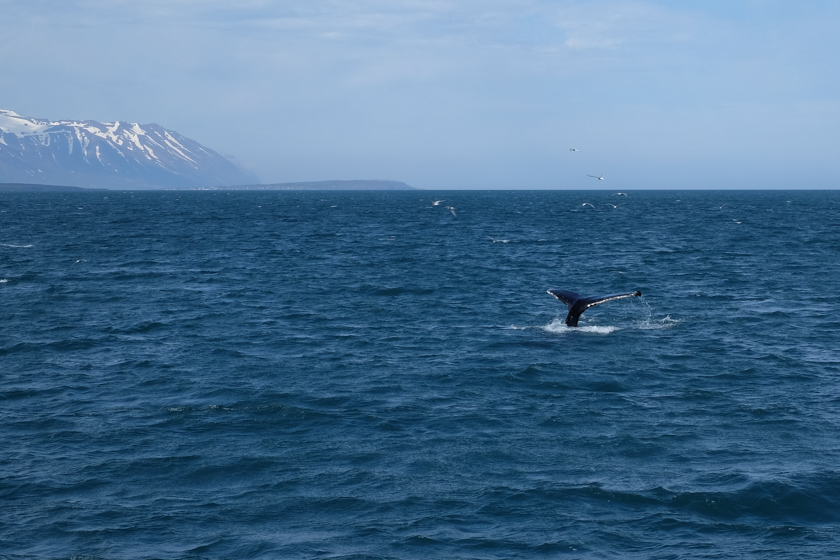 We saw two humpback whales feeding in the fjord, sometimes just a few feet from our boat.

We stayed two nights in Akureyri and went on two adventurues: whale watching and a round of midnight golf. Thanks to Iceland’s far north latitude, it stays light all day long in the summer. Even with clouds overhead, we still had plenty of light to play golf. Rachael remains skeptical of golf, though, so she just walked along and took pictures. 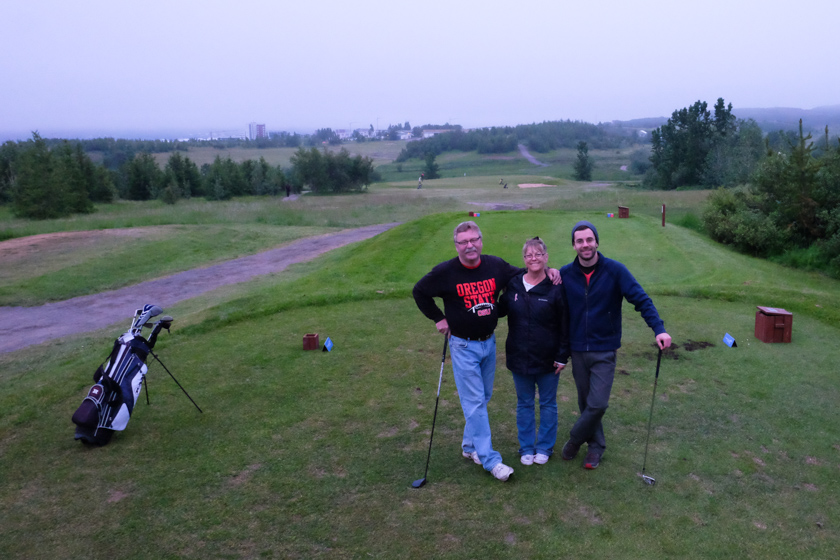 One of the reasons we’d ended up in Iceland in the first place was so that my dad could tee off at midnight. This is us on the seventh hole at about 2 a.m. It never got dark.

We left Akureyri early on Saturday morning and drove all day, stopping along the way. We swam in the chalky blue waters of Myvatn Hot Springs, hiked to the Dettifoss and Selfoss waterfalls, drove up and over a dirt mountain pass to see the puffin colonies at Borgarfjörður Eystri, and finally arrived at our destination of Seyðisfjörður. It was by far our longest day — about seven hours or so in the car and a few more out exploring on foot. It never feels long, though, thanks to the endless daylight.

I was expecting the lack of darkness to be disorienting, but it ended up making our days of exploring really laid back because we never had sundown as an end of day deadline. As long as we carried or found food along the way we could explore as much and as long as we wanted. The sunlight didn’t really impede my sleep, either. Most places we stayed had decent blinds, and when they didn’t my Qatar Airways eye mask sufficed. And anyway, I was so tired at the end each day that I probably couldn’t have stayed awake if I’d wanted to. 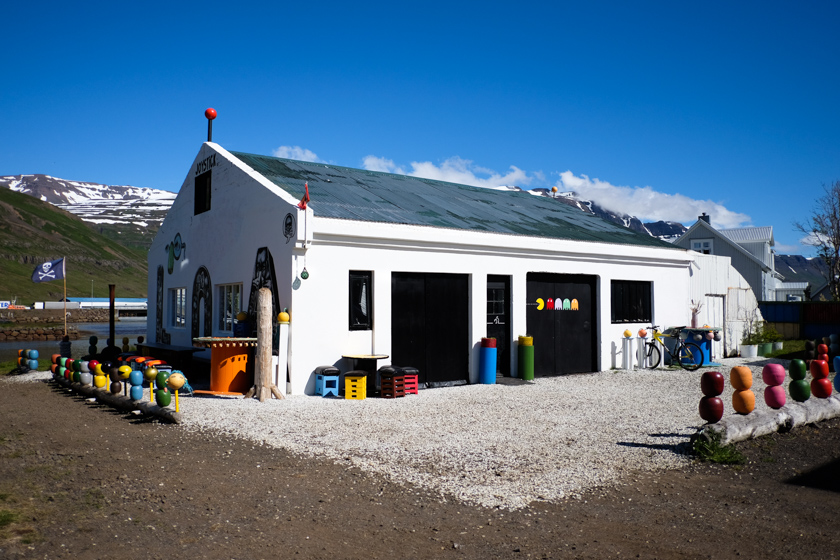 Our neighbor threw a solstice party our first night in town. His preparations included mowing his lawn at midnight. Thank god for ear plugs.

Seyðisfjörður is a small, artsy town that’s home to about seven hundred people. We stayed in a small cottage right on the water and had a full, non-driving day to wander around town and play a round on the local nine-hole course. It was a pretty informal operation: When Rick and I first walked up to find out how to play we found the clubhouse unlocked and empty. Eventually we found a groundskeeper who told us to grab a few sets of clubs from the backroom and just put them back when we were done. Oh, and sign the guest book. All of this on a course flanked by thousand foot mountains on either side with grazing sheep and waterfalls pouring down into the fjord.

We stayed two nights in the south of Iceland: one on a horse farm near Hofn and another on another horse farm near Vik. Both had started renting out rooms and cottages on the side a few years ago. In Hofn we watched Iceland beat England in the Euro 2016 Championship at a local bar - definitely a highlight of the trip. For dinner, I had a forty dollar plate of langoustine pasta. For the most part I felt like the food in Iceland was decent, if expensive. 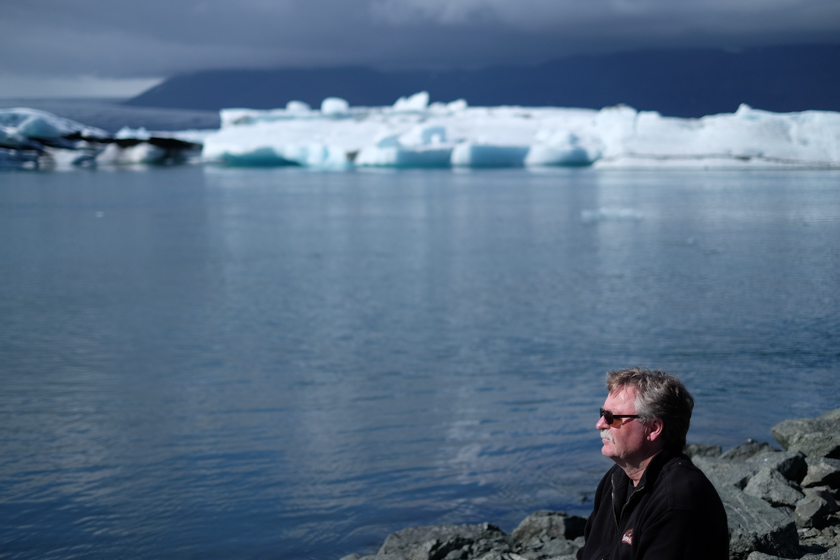 Jökulsárlón is a glacial lake at the edge of the Breiðamerkurjökull glacier. It’s only about 70 years old but has been growing rapidly as the glacier retreats. We stopped here for a while just to watch the giant chunks of ice breaking off and floating into the ocean.

Rick and Denise plane was scheduled to fly out early Wednesday morning, so our last day of driving was an early and quiet trip from Vik to Keflavik. The traffic on the Ring Road had been almost non-existent the entire trip, but in the early morning we’d go an hour at a time without seeing another car on the road. All of this despite traveling in the height of Iceland’s high season. Except for at a few waterfalls and glaciers, it felt like we had Iceland all to ourselves.

Rachael and I finished our trip with a mostly empty day in Reykjavik before the flight that would return us to Oregon after nearly a year away. It felt good to be going home.