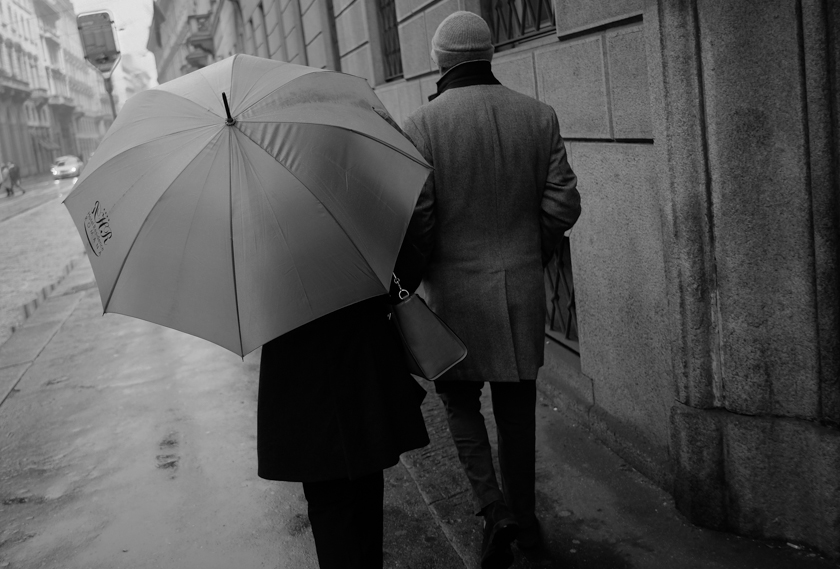 A man and woman walking in Milan’s fashion district.

Everybody loves Italy. Both of my parents traveled there last year, which made me a little less interested in visiting myself (as it was no longer uncharted territory, at least for the family) but Jake lived there for a year after college and wanted to go back so there you go. European Vacation.

Rachael and I flew into Milan to spend a couple days on our own before meeting up with Jake and Bethany and heading to Torino. It was cold and foggy when we arrived. We took the train from the airport into the city and dragged our suitcases down the cobbled sidewalks to an AirBnB on the first level of a place with an old elevator that had a mirror and a bench inside, like something out of The Great Gatsby. I’d tried for weeks to find a Couchsurfing host but no luck, so we ended up renting a room from an older couple who spoke some English. They had their bedroom and we had ours. Just fine for a couple nights. 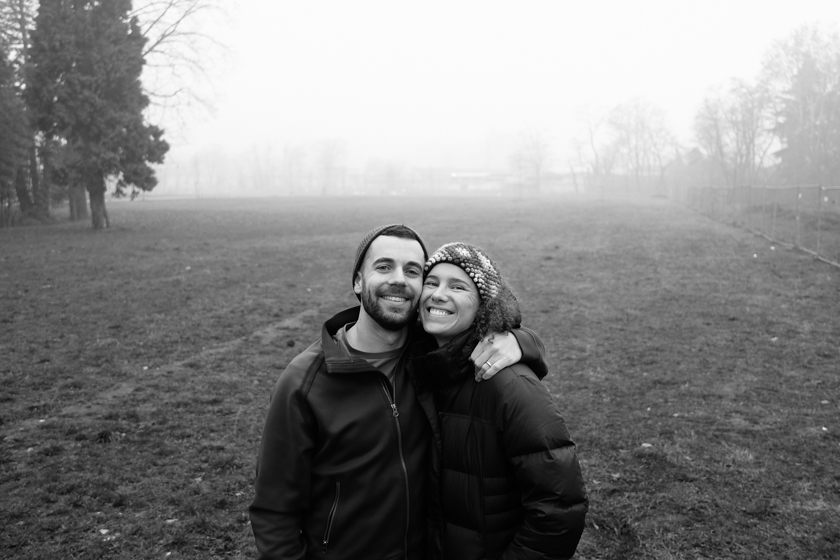 Milan was blanketed in fog for most of our time there.

The next morning we went down to a little place that our hosts had recommended and enjoyed what would become my favorite part of Italy: the cafés. We got ourselves brioches and cappuccinos and a table and watched as all of Milan streamed in and out. Some people sat down and talked, but mostly they just took their espresso and pastry, stood at the bar for a minute, and went on their way. Later on, in Torino, we’d find several of these little cafés and go to them one after the other, since a brioche doesn’t count for breakfast unless you have three of them.

It was raining now, which was a bit of a shame for our only day in Milan, but it gave the city an atmosphere that was wholly different than the Italy you always see in pictures and movies. Dark, cold, gloomy — like Paris or Strasbourg. Rachael bought an umbrella at one of the subway stations and we used that for most of the day. I had my raincoat.

Milan is known for the fashion so we took a walk through the fashion district and marveled at…something. The Mercedes and rich people? I’m not much into fashion but I did enjoy pausing now and again to take pictures of Rachael in the rain. The red umbrella helped brighten things up. We walked around in a book store for a while and took a picture of the Duomo, Milan’s big cathedral.

The highlight of the day for me was when we were walking down the street and stumbled upon Muji, a Japanese chain that sells clothing, home goods, and travel supplies. Muji means low-price, high quality in Japanese. They have them all over the world so whenever I travel to a big city I check to see if they have a Muji. I forgot to look in Milan though, which made happening on this one a genuine surprise. I bought some origami paper and another kitchen timer (I have a thing for timers). After that we continued our journey with a stop at what may be the best ice cream shop in the world, Grom. If a place can make ice cream taste good when it’s 50 degrees outside, you know they’re onto something. 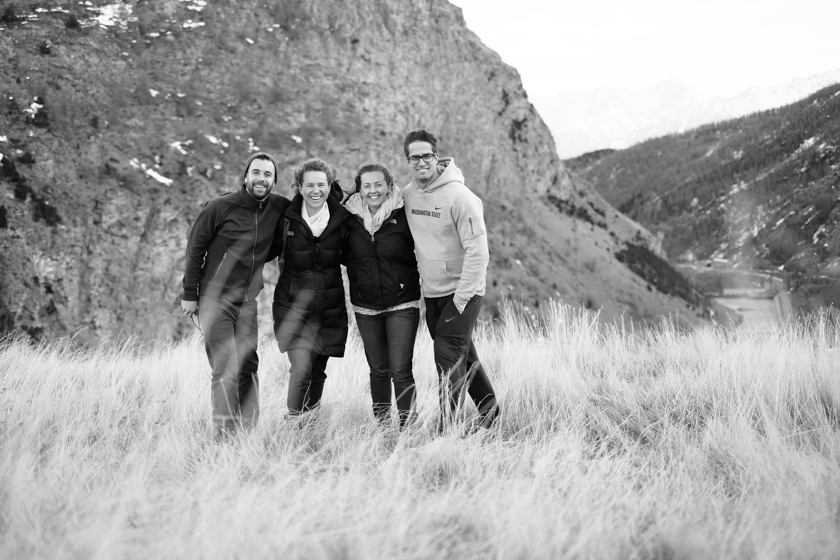 We met up with our friends Jake and Bethany and drove to Torino. This picture was taken on a day trip to the French border.

The next day we took the train out to the airport to meet our travel (life?) companions and friends from Qatar, Jake and Bethany, and pick up our rental car. The drive to Torino wasn’t much except for the truck stop which had a professional cappuccino machine and brioche and everything else. So now, one of the best cappuccinos that I’ve ever had in my life was served at a truck stop. Viva l’Italia. 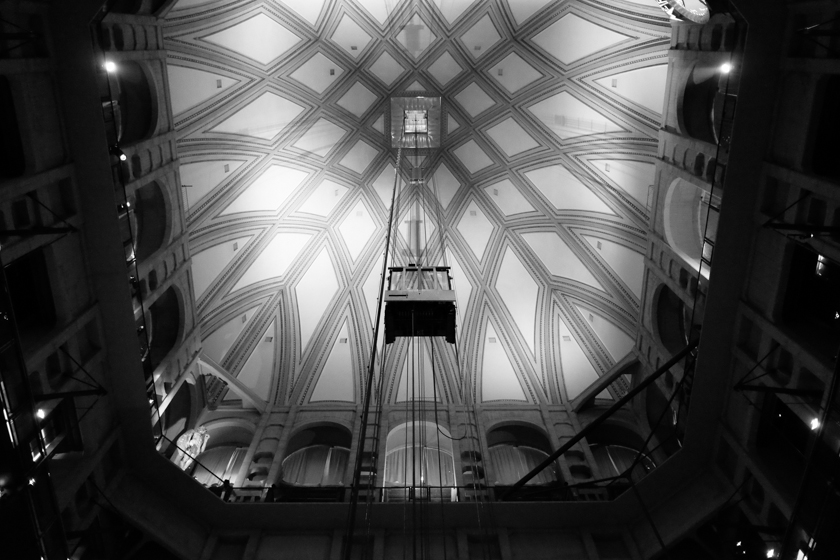 On our last day in Torino we visited the Italian Cinema Museum, which was pretty cool as far as museums go. The highlight for me was taking this elevator up to the top of the tower and looking out at all of Torino.

We spent a couple days exploring Torino and its environs. There was Charlie Bird pizza, where we ate delicious American-style pizza and had a few too many glasses of wine, a trip to the French border to see where Jake used to ride his bike, and dinner with the family Jake used to nanny for. They served a traditional Italian meal, but not what I would’ve expected. We ate carpaccio (raw beef!), corn salad, and a few other things. They tried to get us to drink liquor (paint thinner?) made by a local car mechanic, but we declined.

After being in Torino for a couple days we returned to the road and headed toward Mont Blanc. Bethany has a thing for seeing mountains but unfortunately this one was completely enveloped in clouds. On the bright side there was a tunnel straight through the mountain range that takes you from Italy into France. When it was completed in 1965 it tripled the length any existing highway tunnel and it’s still the world’s deepest operational tunnel — the peak of Aiguille d’Midi sits 8,000 feet above. 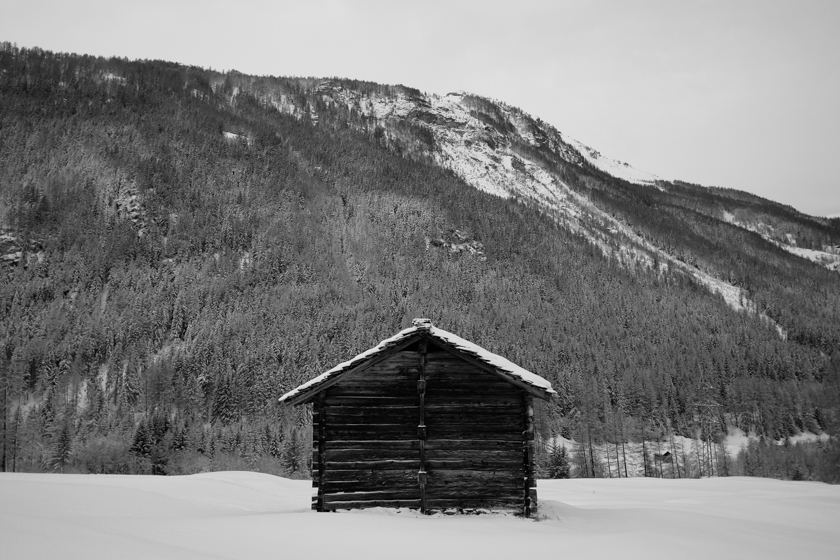 I woke up early on our first morning in Evolène, Switzerland to take a walk in the freshly fallen snow. There were dozens of little huts, just like this one.

We stopped for hot chocolate in the ski village of Chamonix and watched as the snow really started to come down. I’d naively assumed that since drivers are required to carry chains in the area that our rental agency had outfitted the car for us, but no, of course not. And we didn’t find that out until we were driving up the pass out of Chamonix, and then we weren’t. The car was having trouble making its way in the rapidly accumulating snow, so we pulled off and looked in the trunk. No chains. We headed back into Chamonix and met a very friendly old woman at a car mechanic shop who sold us fabric tire covers (which I took to calling snow slippers) that serve the same function as chains, except at a fraction of the weight and cost. Jake and I fitted them over the tires and in less than fifteen minutes rendered what could’ve been a monumental headache into nothing more than a brief inconvenience.

The road from Chamonix to Evolène was snowy, quiet, and long. We crossed two more mountain passes, entered the Rhône Valley, and then climbed back out again to Evolène, where it seemed everyone had gone to sleep, excepting the mice in the small cabin we rented. Thankfully we found a few restaurants open and ended up blowing a hundred bucks on a wheel of raclette.

Rachael and I began our first and only full day in Evolène with a trip the co-op down the street. We bought sausage and cheese and yogurt and fruit and brought it back for what was my favorite meal of the trip. Thinking about it still makes my mouth water. After that Rachael and I went snowshoeing through a few miles of unbroken trail while Jake and Bethany skied. After Rachael and I were done snowshoeing we took the chair lift up and met them on the mountain for a bowl of borscht. 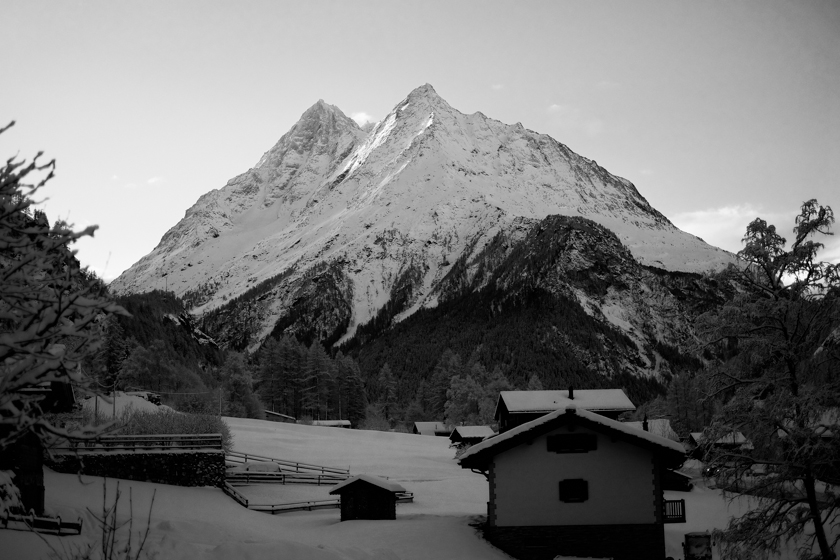 The view from our cabin in Evolène.

There were a lot of things to love about Evolène, but my favorite was how the village and the mountains blended seamlessly into one another. There were hiking and skiing trails right from the middle of town, and the cabins and other small buildings stretched all the way up onto the ski slopes. Some of them didn’t even appear to be connected by road, which made me wonder if they served some purpose for cowherds or their cattle.

The last day of our trip began with blue sky and a fresh helping of snow, which was perfect, because on our way back to the airport in Milan we planned on driving up to Zermatt see the Matterhorn. It was only a few miles from Evolène as the crow flies, but driving there took nearly two hours.

You can’t actually drive to Zermatt, though, since cars aren’t allowed. Instead, you drive to Täsch and then take a train to Zermatt. The clouds were still covering Zermatt so we paid another small fortune to take a funicular up a nearby mountain in hopes that we’d be able the clouds and able to see the Matterhorn. 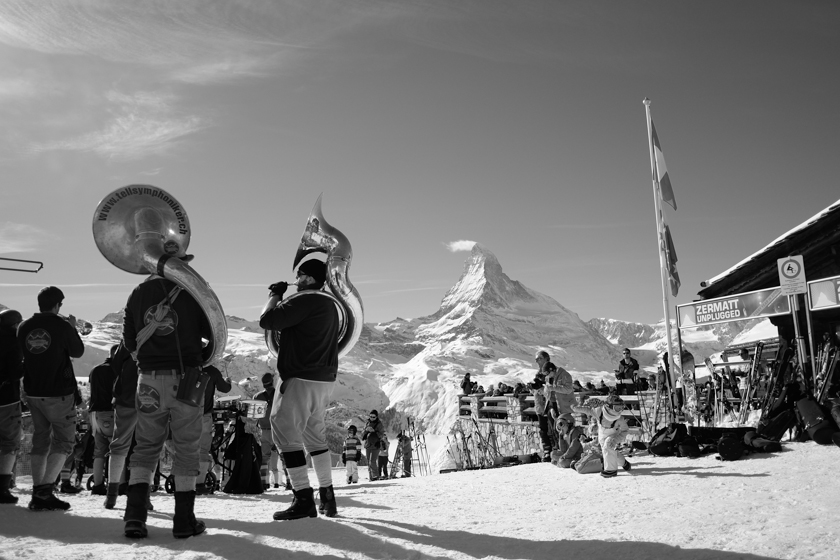 We’d been wondering all day whether it’d be clear enough for us to see the Matterhorn. It was, and we got a marching band to boot.

As we walked out of the funicular station at I could hear a…marching band? At 7,000 feet? As we turned the corner we saw them, a full marching band with drums and tubas and a conductor and everything. They were playing Timber by Pitbull and Ke$ha. With the Matterhorn in the background. It was one of those moments where everything comes together in such a way that you know right away you’ll never forget it.