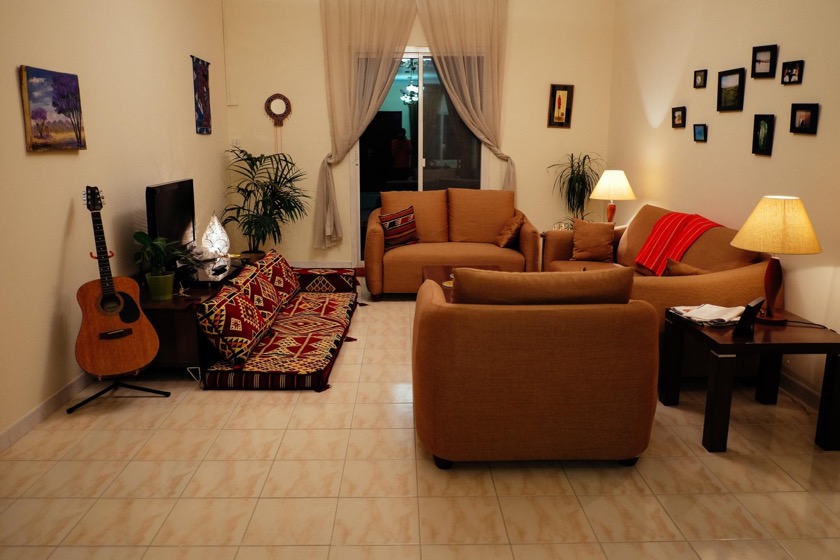 It's been a few weeks since I last wrote, so here's an update: We've moved back home.

When I left off a few weeks ago we'd just moved into a temporary apartment in Bin Omran. It had a lot to recommend it, namely being an elevator away from our good friends Jake and Bethany. But the commute was longer, and the place was smaller, and anyway, it just didn't feel like home.

Rachael and I took to stopping off at our old, moldy house on the way home from work to see if anything had been fixed while we were gone. And there was a lot to do. I'd sent our rental manager an email detailing the things that needed to be fixed, and it just went on and on and on: fix the moldy wall, replace the moldy furniture, paint everything else.

By the end of September, most of those things had been fixed. Rachael and I got antsy about moving back in so we brought a suitcase of stuff back over one Saturday and started to clean up a little. But when I turned the water pump back on and went upstairs I heard a little spray of water coming from the same bathroom that had flooded back in August. Instead of the toilet leaking, though, it was the braided hose under the sink. So I turned the pump off and wondered if the real estate company could fix things faster than they were breaking.

Fast forward a few weeks. The property manager told us to meet him early one Friday morning so that they could fix up the sink and get us moved back in. When we pulled up I saw our 500 gallon water tank sitting in our driveway, disconnected from the pipe that led into our house. Turns out that it had sprung a leak, too, (only wetting our driveway, luckily) so they had to drain it and patch it with fiberglass. Within an hour, though, everything was reconnected and all of the tanks and pipes appeared to be holding their water. I asked the maintenance guy, who'd been working in jeans and a button down shirt, if he usually worked on Friday. He said that he didn't, so Rachael and I did our best to make it worth his while. 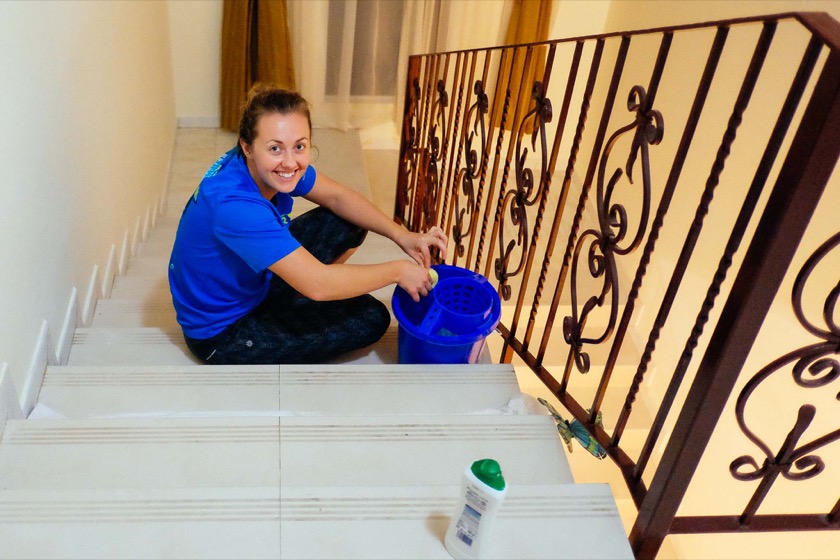 Bethany spent the better part of a day helping us scrub our floors. Thanks Bethany.

We spent the rest of that day and part of the next cleaning. We were helped along by Bethany (but not Jake — thanks, Jake). Not only was there three months of dust, we also had to deal with a fine patina of calcification where the water had flowed out of the bathroom and down the stairs.

A month later now and everything is back to normal. I'm not sure what the message is in all of this, except that sometimes your toilet breaks when you're 10,000 miles away and runs for five days ruining a bunch of your stuff and forcing you to live somewhere else for a month but eventually water leaking from a toilet becomes water under the bridge.