Gliding Into My 29th Year 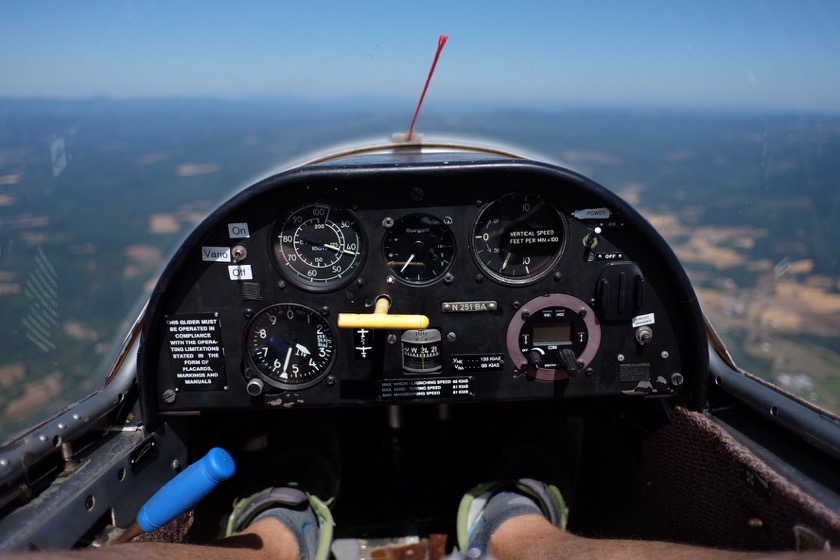 I rode in the front seat while Don, the pilot, sat in the back.

Rachael didn't tell me where we were going, but by the time I saw the gliders lined up along the side of Highway 26 at the Willamette Valley Soaring Club, I knew exactly what my birthday surprise would entail.

Don Flinn, my pilot, took me out to the two-person, engine-less metal glider he and I would be flying in and showed me the relatively simple controls: a stick between the legs to control roll and pitch, and pedals for yaw. There were flight controls in both seats, and Don told me that since he's a flight instructor I'd be able to try my hand at flying if I wanted to.

The words Don used to characterize the type of flying we were doing, "gliding" and "soaring," hinted at an easy, graceful means of conveyance, but the takeoff was anything but. 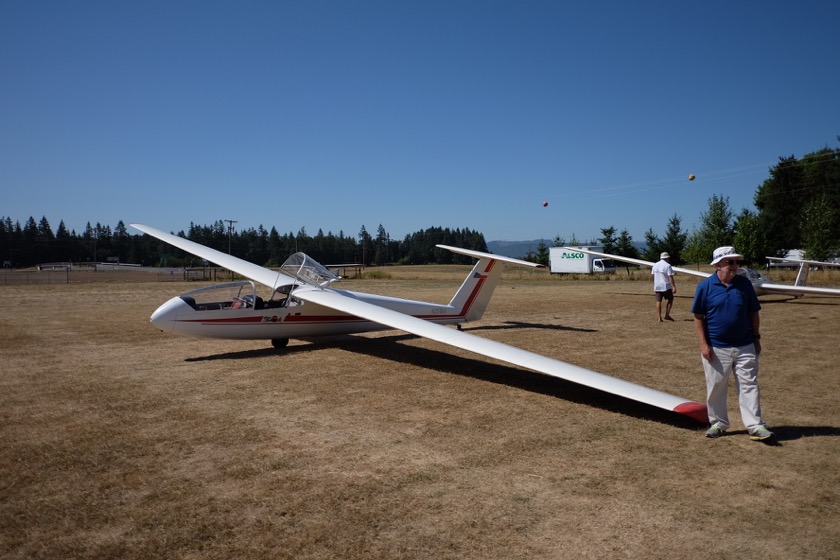 The two-seat glider we flew in. Don, the pilot, is off to the right. Note the single wheel for landing.

The glider sits low to the ground and I'm in the front seat, so it feels like I'm about to be shot out of a cannon. There's a bright yellow rope connecting the front of our glider to the back of the old crop duster that will tow (not drag!) us to about 3,500 feet. Don is behind me, narrating what I'm seeing and what's coming next.

He swings the rudder back and forth to signal to our tow pilot that we're ready to go, and before I have a chance to mentally prepare myself for takeoff we're gliding down the runway.

I'd imagined towing a glider to be like a truck towing a trailer, one following perfectly in line behind the other, but that's not the case at all. We're moving up and down and side to side. It probably wouldn't be as noticeable except that we're only 200 feet behind the plane in front of us. Tailgating, almost. 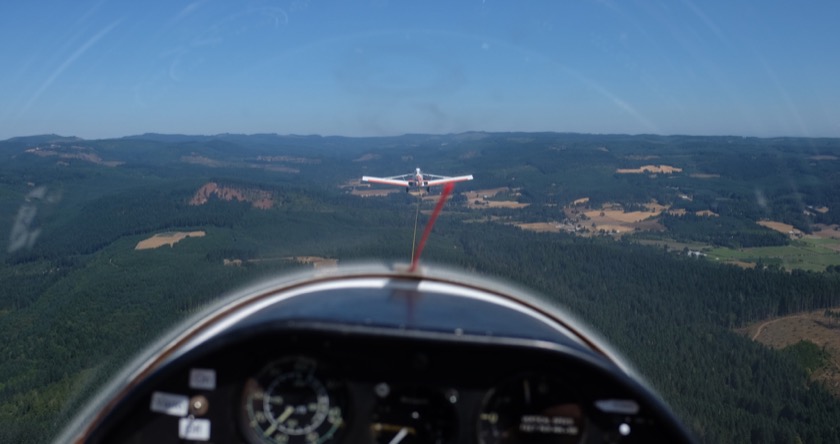 I took this shortly before we cut loose.

We're only a few minutes into the flight and already my palms are sweaty, shedding sunscreen and staining my shorts. I can't help but compare it to the trip Rachael and I took a few years ago with my friend Tim. That flight, in a single engine, four-seat plane, was as smooth as riding in a car. This flight, on the other hand, feels like riding a roller coaster, except without the rails. The effect is compounded by the fact that I can't see any of the maneuvering actually happening since Don is sitting behind me.

Don says we've reached our target altitude and that we'll be cutting loose soon. He says something over the radio and then I can see the line detach from the front of the glider. The tow plane banks to the left and we bank to the right. Don tells me to look out the window and watch the tow plane's acrobatic descent back to the runway, but I'm too distracted by how quiet it is. With no tow plane in front of us and no engine of our own, the only sound I can hear is the wind outside. It's magical.

After a while flying in and out of thermals above the Tualatin Valley, Don asks me if I want to fly. I wrap my hand around the stick and start by holding the glider steady, trying to keep my movements as subtle as possible. A rapid beeping from the glider's control panel tells us we're in a thermal, so Don tells me to bank to the right so we can stay in it for as long as possible. I'm expecting it to feel smooth and graceful but in reality it's like walking on an ice rink in street shoes. The tiniest motion of the stick is immediately translated to the glider, and I feel like too sudden a movement will put us into a death spiral. Once in the bank, though, the glider takes over and the stick and pedals can be returned to even. Moving them in the opposite direction levels the plane off, which I try a few moments later.

"Want to feel some Gs?" Don asks, and then directs me to push the stick forward and put the glider into a descent. I guess I don't push it hard enough, though, because then he takes control and puts the glider into a much steeper dive. Now it really feels like a roller coaster. Just as I start to contemplate my mortality Don pulls back hard, pointing the glider back toward the sky. Blood drains from my head and I instinctively yell out "Wooaaah!"

As we come close to leveling off he tilts the stick forward again, sending us into a parabolic, weightless arc. It's a huge rush, but also a reminder that gravity can be very comforting.

It's hard to judge how long we've been flying — has it been five minutes or fifty? — until Don says that we ought to be getting back to the runway. I point the glider in that direction but keep finding thermals along the way. Don admits he's having too much fun to put it down, so we stay up a little longer.

As we approach the runway we fly into a "sink," or an area of descending air, which causes the glider to drop dramatically toward the quickly approaching ground below. But Don's quick reaction bringing in the spoilers maintains our altitude and allows for an otherwise perfect landing, balanced on the one wheel that sits below the fuselage.

Once we'd come to a stop I helped Don tow the glider off the runway and then asked him to pose for a picture. Rachael and I sat at a picnic table near the runway and ate our packed lunch as gliders took off and landed on the runway next to us. The adrenaline rush from the flight slowly gave way to a kind of uneasy, hungover feeling, but I still couldn't wipe the grin from my face. I might be hooked.