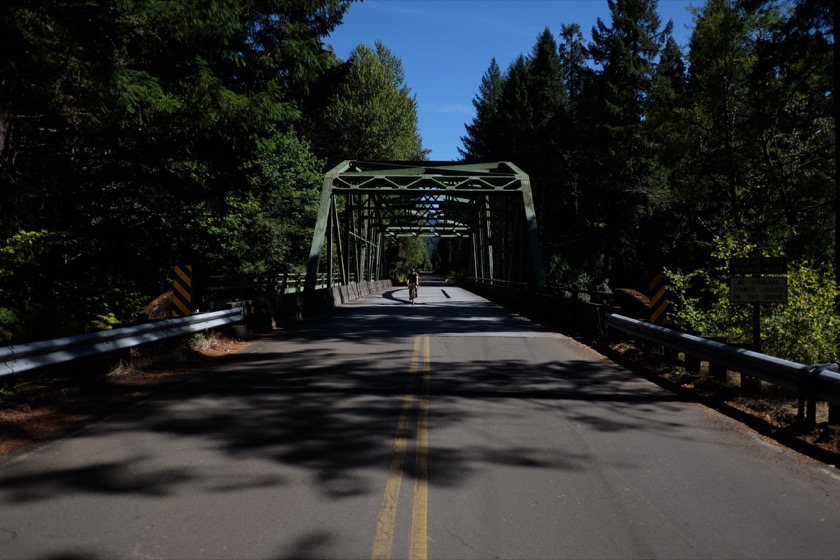 Woke up not robbed and not murdered, despite sleeping on the side of the highway, so it's a good start to the day. Spent a couple hours packing up and making breakfast (oatmeal and coffee) and then on the road.

My butt really hurt at the beginning of the day and then got progressively worse. Applied Vaseline a few times to prevent saddles sores, but it only helps so much. At least we were on smooth roads today, except for the McKenzie River Trail at the end, during which I couldn't sit down because of the rocks and roots.

Highlight of the day occurred on the climb out of the Willamette basin and into the McKenzie. Ryan was up the otherwise empty road a little bit when we spotted a big animal on the side of the road. Thought it was a cougar at first but a second look revealed a black bear looking right back at us, two or three hundred feet up the road. I didn't feel any immediate danger since the bear had noticed us and didn't appear startled. I don't think they're known to rush at people, but if it did we could've just turned around and ridden down the steep hill we'd been climbing.

The bear walked across the road and disappeared into the trees a few seconds later and left Ryan and I waiting to see if there were any others. Sure enough, a small cub, maybe a foot and a half at the shoulders, emerged from the trees on one side of the road and followed the mother to the other. "Good thing we didn't get between those two," I said. We were about to start riding again when another cub appeared. But instead of crossing like the other, this cub disappeared back into the trees from which it came.

Now we were really in a spot. Momma bear was on one side of the road and one of her cubs (maybe more) was on the other. We obviously weren't going to wait there all day, but to ride forward would mean breaking the cardinal rule of bear safety: don't get between a mom and her cub (I later learned that this applies to grizzly bears, not black bears). So we continued riding, constantly looking into the trees on the sides of the road until we were a few hundred feet past where we'd spotted the bears. We never saw them again.

Got into Paradise Campground with plenty of daylight left. Took a bath in the icy McKenzie (which really helped my butt) and then made some "Ram-o-lami" at the recommendation of Ryan's friend Andy. We had high hopes but it turned out to be not much more than ramen and meat, Tillamook beef jerky sticks in our case. Still, it was filling and tasty. 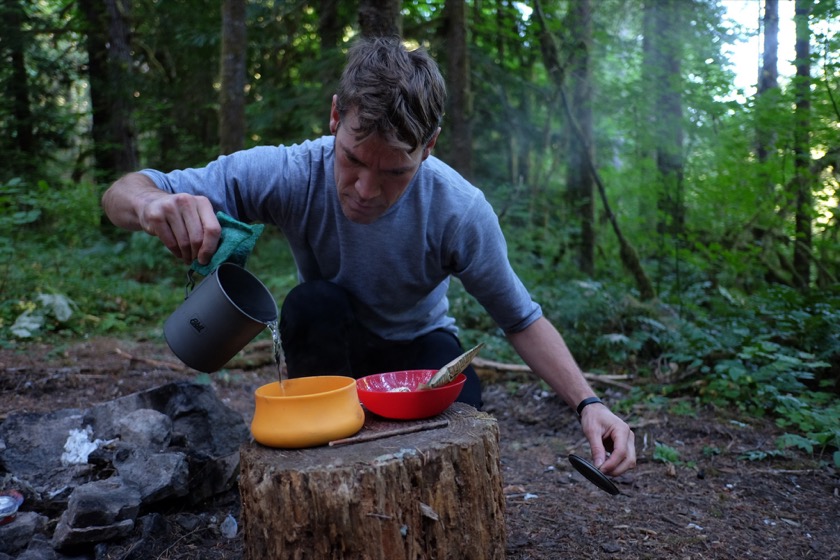 In good spirits after bathing and eating though seriously unsure about how this is going to end up. If my undercarriage situation doesn't improve tomorrow I may have to take desperate measures.