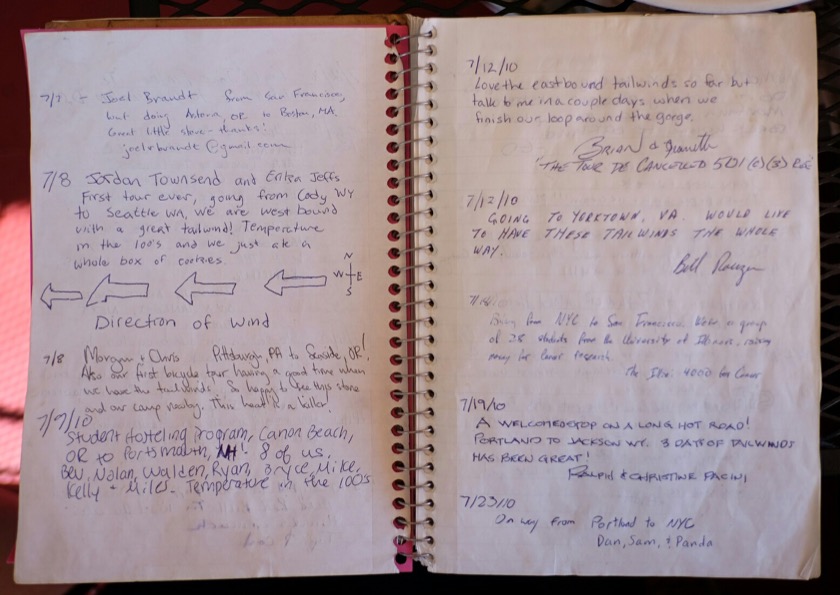 Expecting wind and heat, I got on the road early today. I'd been without cell service the night before but once I was close to the highway it came back so I called Rachael to catch up on each other's progress. She's still in Peru so whenever both of us are able to talk we take advantage of it.

Today was a pretty boring day with one goal: get off of Highway 14. The road quality was degrading and the traffic increasing. I was ready to be on side roads again.

The only food to speak of was at a convenience store and short order cafe in Roosevelt, Washington. There wasn't much to it, but it was a welcome respite after being on the road all morning. I signed their guestbook (see above) and even ran into the two cyclists I'd camped next to the night before.

I don't have a cycling computer with me so I measure my distances by mile markers when I have them, and by guessing when I don't. I was counting down to marker 108, when I'd turn off onto the "Old Maryhill Highway" and rejoin the main road at the bridge into Biggs Junction. 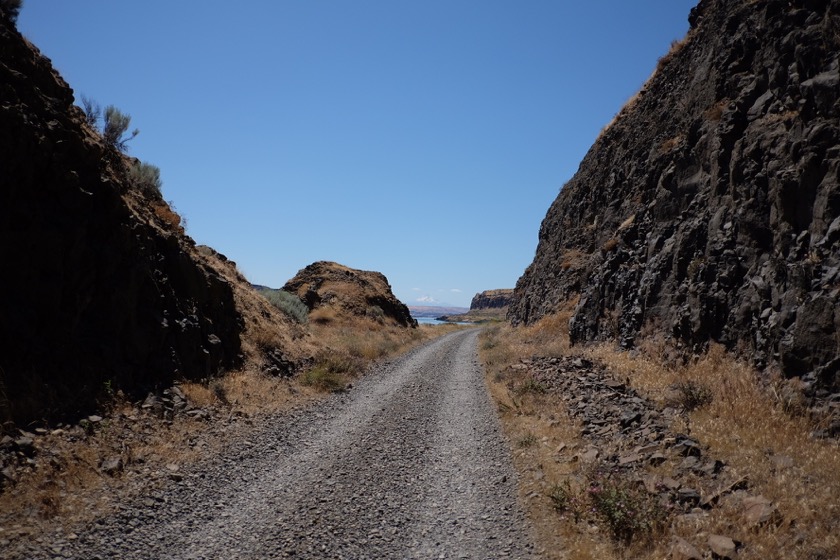 Unfortunately, what Google calls an "old highway" I'd call a stream bed with tire tracks. It took me the better part of an hour to bump over its four or so miles, wishing the whole time that I'd stayed on the main road. On the bright side it delivered me to a fruit stand in Maryhill where I sampled half a dozen peach slices and walked away with two whole ones of my own. From there it was over the Sam Hill Memorial Bridge on Highway 97 and down to the Deschutes River State Park, prominently advertised next to signs which said "No Vacancy." Damn.

When I asked a ranger if there was anywhere else I could camp, he pointed me upriver toward primitive campsites and implored me to watch out for rattlesnakes. I didn't want to have to worry about rattlesnakes, so after a brief dip in the Deschutes I walked back to the campground and asked the camp host if there were any other options. He said their was a special site reserved for "managers" where I could pitch my tent, but that it was heavily sloped and right next to the driveway. I took him up on it.

The family who was camped next to me were eager to share their beer and dinner, so I spent the rest of the evening talking with them about unions, the Israeli-Palestine conflict, and what it's like to live in the Middle East.

Tomorrow I'll take some dirt paths and side roads out to Hood River. It's supposed to be hot and windy, so I'm hoping to be on the road by 6 a.m.