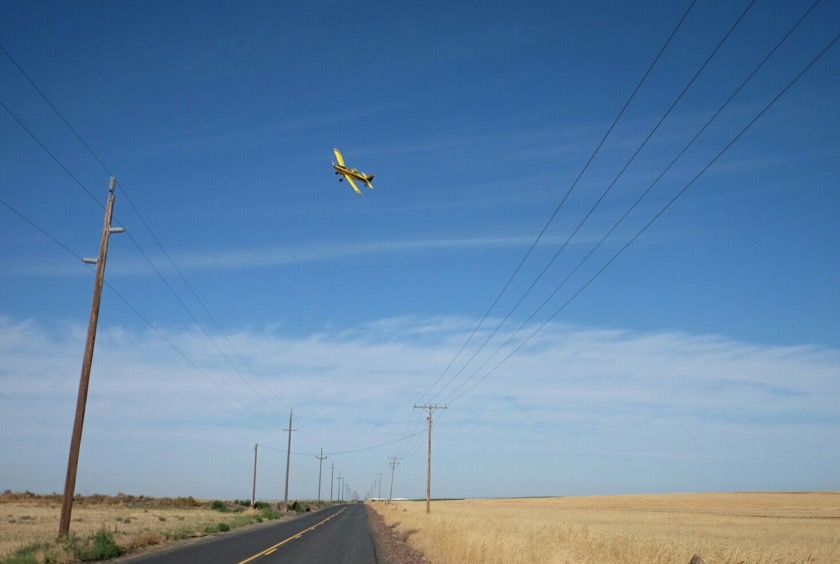 My aunt Lori and uncle Brit had helped me put together a route out of town so as to avoid gravel farming roads, and their advice proved very helpful. They pointed me toward a road that took me almost all the way from Pendleton to Hermiston, about 25 miles, without a single car. I did come across a couple terriers that were eager to give chase, but their short little legs were no match for my 29" wheels.

Shortly before I arrived in Hermiston my bike began to feel a little squishy in the back. Sure enough, I'd gotten a flat. Thanks, Lori! Seriously, though, the flat was actually caused by a small piece of glass that had worked its way into the tire. I'd probably been carrying it around for years.

I pulled into some shade on a side road and pulled off the rear wheel, then took off the tire. The glass was easy enough to find and remove, but when I pulled out the replacement tube I realized that it was actually the wrong size. Whoops. I'll just patch it, I thought, but it turned out that my rubber cement had dried up after years of sitting around. Double whoops.

Luckily the replacement tube was a close enough fit so I swapped it in and continued onto Hermiston. After a quick stop at a bike shop there I had the right size tubes, fresh rubber cement, and a healthy dose of gratitude that this didn't happen between Prineville and Pendleton, where I'd gone several hundred miles without seeing a bike shop.

Now on the Washington side of the Columbia, I turned my bike back to the west and began the long, 80 mile grind (to be completed tomorrow) on the less than ideal Highway 14. Thankfully the shoulders were wide, the road smooth, and the traffic relatively light. It wasn't quite like how I'd owned the road in Central and Eastern Oregon, but not too much to complain about, either.

I pulled into the campground at Crow Butte in the early afternoon, thankful to be getting off of the hot road and into some cool, grassy shade. Not long after I arrived a couple more cyclists came in, the first I'd seen in about 400 miles. Wes and Lauren are about to finish a long tour from Chicago to Astoria. Even though I'm content to travel alone, I appreciated the opportunity to trade stories with people who were experiencing a lot of the same things as me. I'm on an established cycling route now (the Lewis & Clark Trail, from Missouri to the coast) so I expect to be seeing a few more cyclists.

Tomorrow I'll be back on Highway 14 for about fifty more miles before reaching Maryhill and crossing back into Oregon. I'm excited to be continuing west, but not excited to be riding on that road. Hopefully it's not too much trouble.