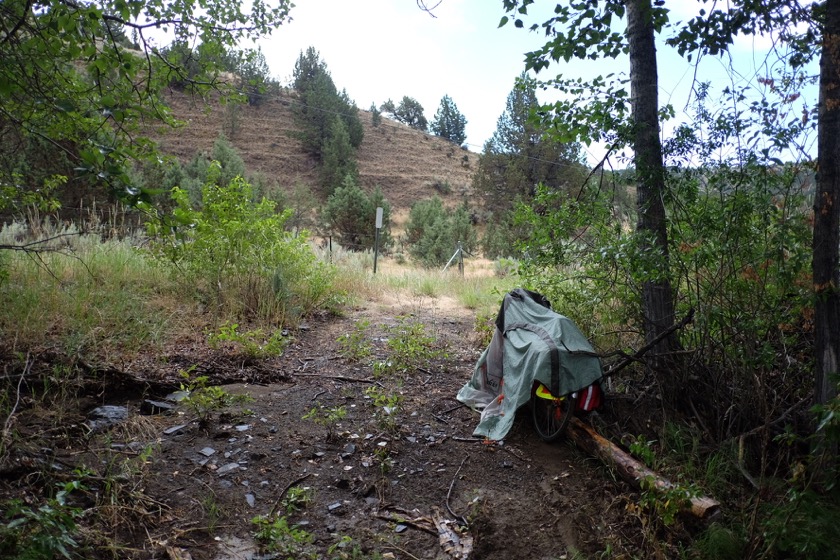 I started the day in the Ochoco Forest with a hot breakfast that Liz made. We said our goodbyes and then I was off again, headed northeast with plans to spend the night at a "pilots' ranch" called Land's Inn (basically just an airstrip with a few small cabins for guests).

As I was approaching Mitchell, I started to notice thunderheads on the horizon. Not long after, a man in a minivan with a Georgia accent pulled up alongside me and asked if I needed anything like food or water.

"Have you heard a weather report?" I asked. I'd been without cell or internet service for two days and had no way of knowing.

I ate a cheeseburger in Mitchell and then hurried on, making it a couple miles up the next pass before the rain began to fall. Soon after, I heard a rumble that was too close to ignore. Dammit, I thought, should've stayed in the restaurant.

So, two options: ride back to Mitchell, hoping nothing too exciting happens while I'm on the road, or pull off and look for shelter. Not wanting to be on the road any longer than necessary, I pulled off near a forested embankment, covered my bike with my rain fly, and crouched down, as I've heard you're supposed to do if you're caught out in a lightning storm. The rain passed over and soaked me, I heard a couple more strikes, and then just like that, the skies cleared again. 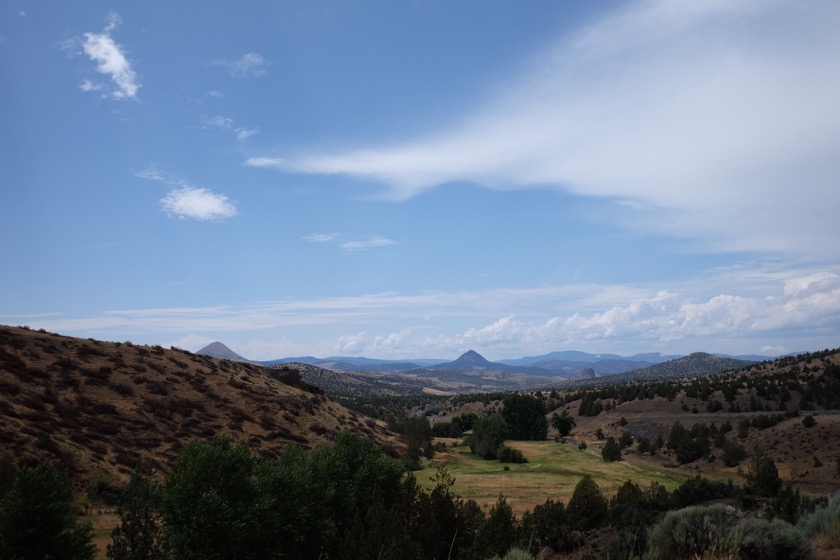 I rode over Keyes Creek Pass and then continued through the several hour descent to Highway 19, in the John Day National Monument. I turned off the road at the sign for Land's Inn and began my climb up the hill. At this point, I'd ridden about 60 miles, climbed about 4,200 feet, and was more than ready to call it a day. According to my research, it was only five miles up the road and a few hundred feet above the John Day River, which I'd been riding next to. The shrubs and grass were all charred black, burned by a wildfire that had passed through a couple weeks before.

The hill wasted no time in kicking my butt. I had been riding hard for fifteen minutes or so before I saw the first mile marker. Four more miles to go, but I'd probably done most of the climbing already. I was still in high spirits.

After I'd been riding for a few more minutes an older man on a four-wheeler drove up alongside me and asked where I was headed. Land's Inn, I said, and then asked how much further up the road it was. He paused for a moment, and then pointed to the highest hill I could see on the horizon, easily over a thousand feet above us.

"You're kidding, right?" I asked. Clearly my research was way off.

I continued on, passing the second mile marker, and then the third. I'd been making my way up the hill for the better part of an hour now and starting to lose hope. Obviously if I kept climbing I'd make it there eventually, but would eventually come before sundown? Before tomorrow?

Then it hit me. A small rain drop, on the back of my right hand. And then another. The rain picked up quickly, and within a few minutes I was wet again. Except that this time there were no trees under which to take shelter, only burned black trunks. When the rain progressed to a complete downpour, I set my bike down in the ditch and buried my face in my hands. I wanted to go home.

Feeling even more depressed about not making any forward progress, I climbed back on the bike and continued up the muddy road. I arrived at Land's Inn a few minutes later, cold and wet, but most importantly, done with what had been a long, taxing day. 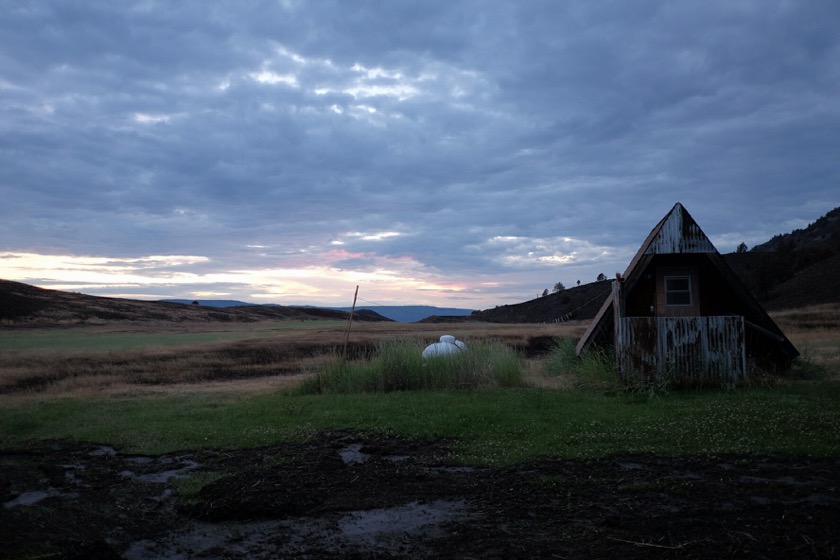 The owner of Land's Inn, Tom, set me up in an A-frame next to the airstrip and gave me some leftovers to heat up in the rudimentary kitchen at the back of the airplane hangar. I had a shower, too, and then shared a few beers with the ranch's other guests, Jerry, Jack, and Abby. By the time I crawled into bed I was warm, dry, and ready to continue my journey.