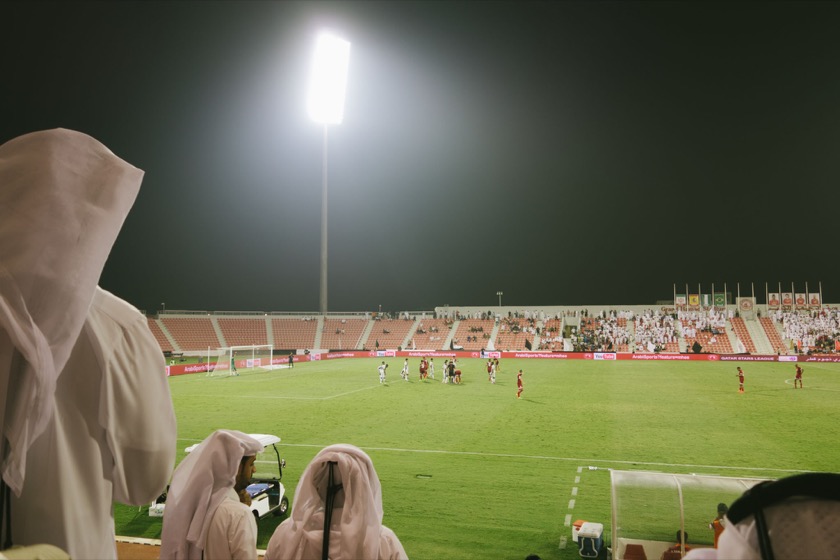 I never could've imagined how stark the divide is between Qataris and expats. We spend all day teaching their kids, yet I can count on one hand the number of times I've actually had a real conversation with a Qatari outside of school. I won't spend any time lamenting the fact since the misfortune is self-evident, but I will share a story about an interaction I had a few weeks ago.

We were at a soccer game with a couple new friends from our school. It started around 8 p.m., but it was still pretty hot and humid out, so during halftime Rachael, Jake, and Bethany went to the concession stand to buy something to drink. While they were gone, I decided to try to strike up a conversation with a young Qatari man sitting behind us.

"Excuse me, do you speak English?" I asked.

"Yes," he responded, with a smile.

"I've been hearing people shout 'haka' over and over during the match. What does it mean?" I figured that I'd butchered the word so completely that he'd have no idea what I was talking about.

"Not haka, hakam. It's like referee. We're yelling at the referees because we are mad at them."

"Of course," I said. "I should've known they were shouting at the referees. حكم!"

"The United States. I came here to work as a teacher. Where do you work?"

"I'm a doctor at a local hospital. I just graduated from medical school last year."

The man sitting to his right, who I later learned was his cousin, said, "He's good to know because he can write you a doctor's note so you don't have to go to work."

"But he's an American," the doctor said. "They don't skip work!"

They both laughed. I wasn't sure if the joke was on me because I actually have to work for a living, but it was still funny to hear, especially from a Qatari. After all, there's a stereotype among expatriates here that Qataris are not very industrious, but apparently they harbor that stereotype about themselves, too. Or at least these guys did.

We continued talking for the rest of halftime about soccer, travel, and education. It turned out that his nephew, a second grader with a goofy gait and a wide, squinting smile, is a student at our school who Rachael and I know well. I asked him if he'll send his kids to a Qatar Foundation school like ours when they're old enough.

What a difficult choice. I'm lucky to not have to trade my culture and traditions for quality education.

As halftime came to a close, they shared a bag of sunflower seeds with me and asked if I wanted anything to drink from the concession stand.

I spent the second half trying to muster the courage to ask for his phone number or email address, knowing full well that he'd probably find the solicitation a bit intrusive. When the referee blew his whistle signaling the end of the match and my last chance to make a Qatari friend, I turned around, but the doctor and his cousins had already left.