A few weeks ago Rachael and I returned to Qatar after spending our summer vacation visiting friends and family in Britain and the United States. Everyone seems to have their own analogy for stepping from the dry, air-conditioned airport into the hot, wet air of Doha: walking into a wall, stepping into a hot shower. I, for one, am not sure that words can really do the feeling justice, but it's a pretty strong reminder that you're back in Qatar.

One of our close friends from last year, Matt, met us at the airport and drove us out on to the crowded highway and back to our house on the southern edge of Doha. One of the diversions we drive through a lot had been straightened out, but besides that, the drive was exactly as I remembered it, cars speeding and swerving and honking, headlight and streetlight beams made visible by the dust and humidity.

Our return to Qatar was going perfectly until we pulled up to our house and I spotted the dead fan palm on our porch, a brown, brittle shell of its former self. Right at that moment, I felt a feeling I hadn't felt in almost exactly a year.

We were landing in Doha, and my face was glued to the airplane window, marveling at how any place could be so brown, flat, and dusty. There was nothing green visible from the air: no grass, no trees or shrubs, nothing (though when I look back at the photographs I took, I can now see a few shrubs and date palms). The excitement of going to a new place was overcome by a fear for what that new place would bring. I started to think, "What have we gotten ourselves into?"

After a flurry of introductions to new colleagues at the airport and a short bus ride, we were in an apartment in an anonymous six-story building in a sea of anonymous six-story buildings. For the first time in thirty hours, after goodbyes in Portland, crowded airplanes and airports, and meeting our new colleagues in Doha, we were alone. And not just alone in the physical sense, but in the way that you feel in the pit of your stomach, like you're in over your head and there's no one coming to help.

If there was a fear in it, it was not a rational one. Though we'd only been in the country for a few hours, we already knew plenty of people, and there's an American embassy and military base here. And anyway, Qatar is a pretty safe place to live.

The feeling dissipated as we unpacked our suitcases and rearranged furniture. It came back, briefly, when we turned off the lamp to go to sleep, but by then I was so tired from making our first trip to the Persian Gulf and trying to settle in that sleep soon interrupted it. 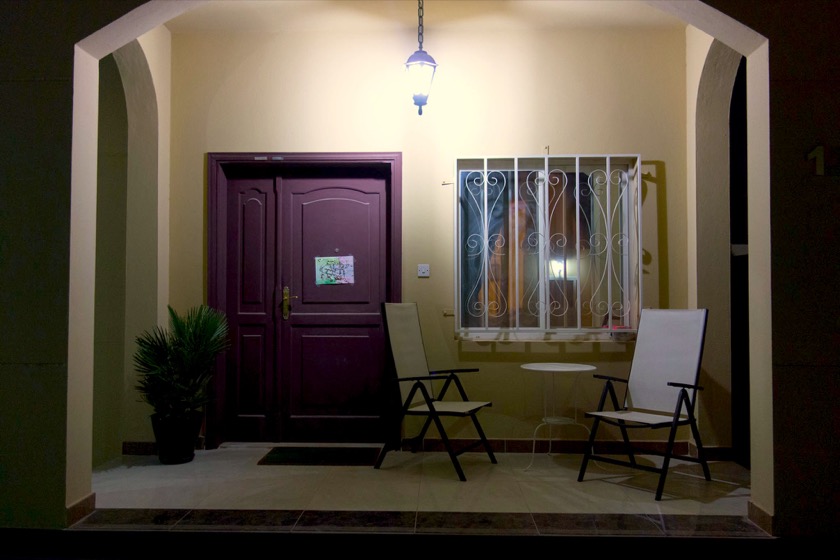 This time, a year later, my seat was in the middle of the plane and there was no window to look out of, but no matter. I already know what Doha looks like from the air, and at least now I have a pretty good idea what we've gotten ourselves into. Plus, I found a new plant for the porch.