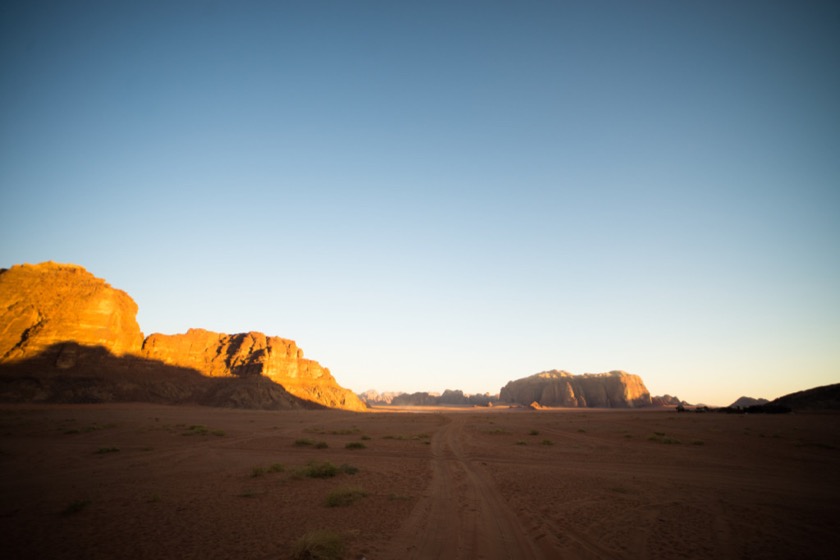 Standing on the edge of Wadi Rum feels a bit like looking over the edge of a cliff. Behind you there's a small town with roads, a few shops, and a small school, and in front, nothing. Not anything that looks like civilization, anyway. Instead, there are towering sandstone spires that rise up from a flat desert floor. There isn't much greenery to speak of, nor are there buildings, roads, or many people.

Rachael and I had driven our rental car south along the main highway in Jordan and had parked it in a lot where it would stay for the next three days. Until then, our transportation would consist mostly of run-down Toyota trucks along with a short trip by camel.

Naja, the man who had helped us arrange our three day trek in Wadi Rum, met us with two cups of Bedouin tea, so-named because it appears to be as much a part of the culture as nomadism and living in tents. In our entire week in Jordan, I don't think we met a single Bedouin who failed to offer us a cup of the syrupy sweet, sage-flavored black tea. 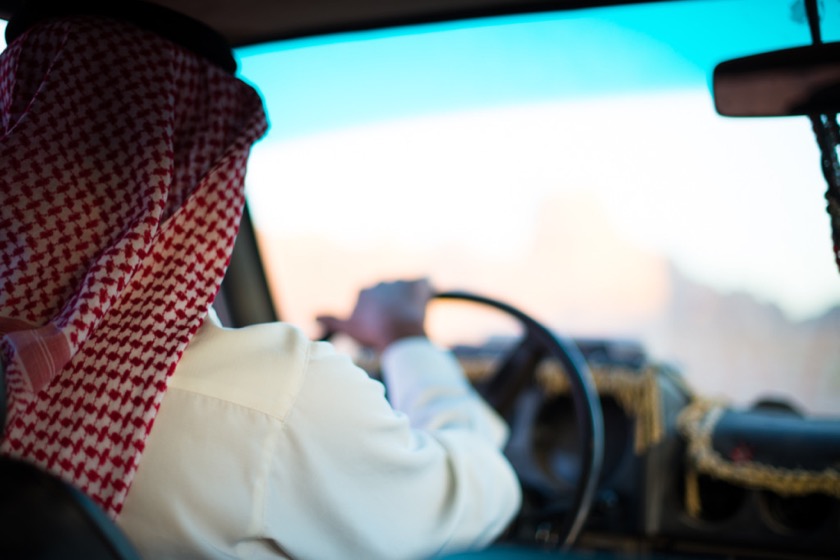 Our time in Wadi Rum was to start with a short trip by camel to the main camp and then two days of trekking around the desert in a jeep with Naja's younger brother, Abdulrahkim. We'd return to the camp in the evenings for dinner and then set out early the next morning.

The first night we were there the sky was perfectly clear and I was looking forward to experiencing one of the things the area is known for: star gazing. Dry, cool air makes for better seeing, and being a mile above sea level doesn't hurt either. Unfortunately, the full moon spoiled most of those plans. It was simply too bright to see anything like the broad brush of the Milky Way I'd seen in pictures, and Abdulrahkim told me as much when I brought it up. Traditionally, Bedouins navigated using the stars, and I guess even though Abdulrahkim now owned a Blackberry and enjoyed posting to Facebook, he still knew what was up. 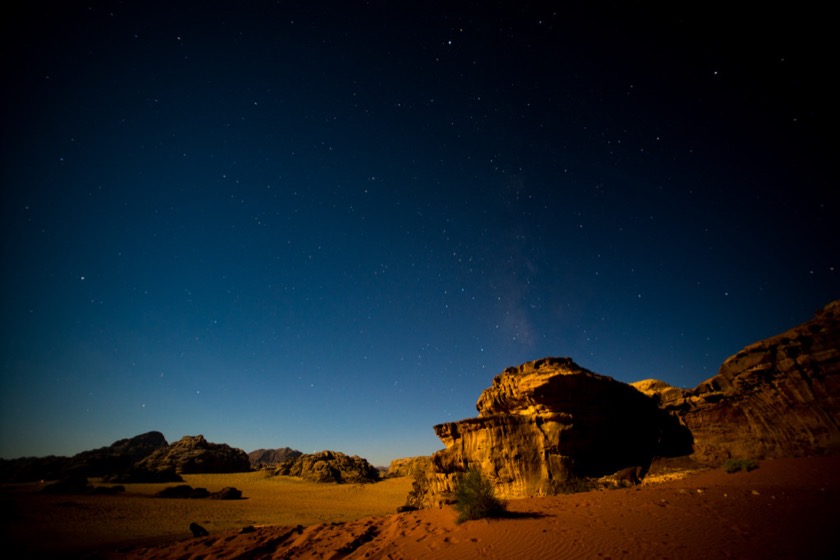 Despite knowing that I wasn't going to see anything very spectacular, I hauled out my camera and tripod shortly after the sun set and started taking pictures. After all, I could still see hundreds and hundreds of stars. Back home in Doha, I'm lucky if I can see thirty on any given night.

Rachael and I slept in really nice little tent with walls made of some sort of fresh, fragrant wood. There were two single beds, each with a Spiderman comforter. It got pretty cold that night, but it wasn't anything that couldn't be fixed by cuddling. 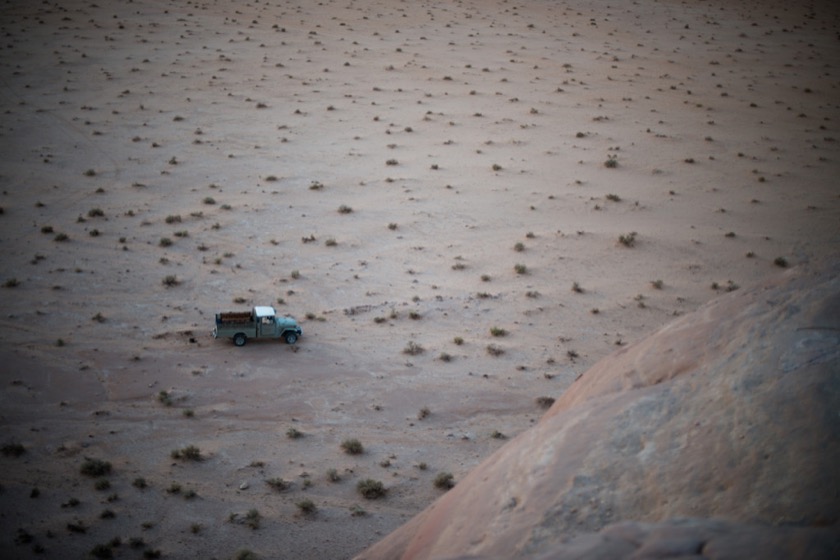 The next morning Rachael and I headed out with Abdulrahkim in his father's mid-70's beige Toyota truck. It was just the three of us, him up front and Rachael and me sitting on benches in the back underneath the shade of a Barbie fleece blanket.

Our first stop was a rock called Mushroom Rock which was shaped like…a mushroom. It was actually sort of funny to call attention to such an insignificant rock in such a stunning desert. I don't know that I could've really articulated it, but the real draw of Wadi Rum — for me, anyway — was not Mushroom Rock (nor the chicken-shaped rock we'd visit the next day). Luckily there weren't too many stops that included food-shaped rocks. 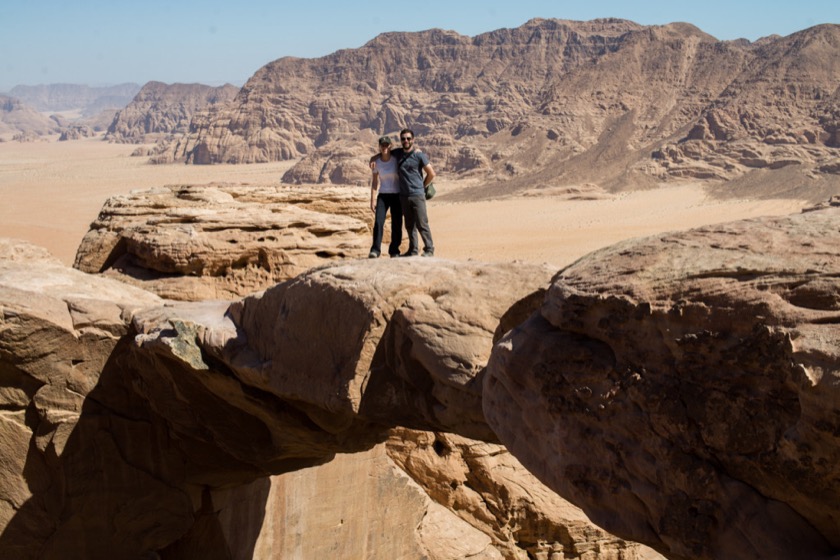 Next up was a several hour hike and scramble up one of the largest sandstone mountains in the area. At the top was a long and narrow arch which spans a gap a few hundred feet deep. It looked like it belonged in Arches National Park, except that you were allowed to walk across it. Pretty cool.

After we descended Abdulrahkim cooked some beans and tuna (a strange combination, to be sure) over a fire, added a salad, humus, and pita, and called it lunch. He said that some tour guides bring packed lunches but that's not as fun as eating a freshly cooked meal in the middle of the desert. I agree. 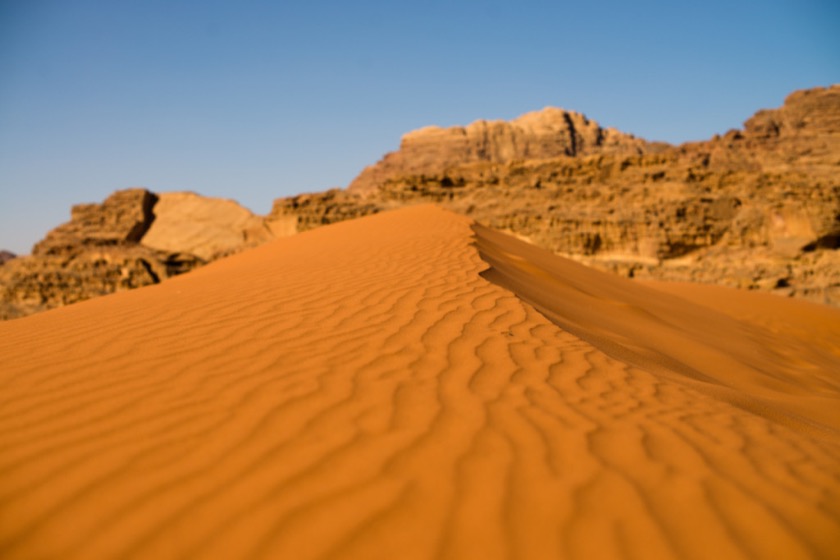 We spent the rest of that day and most of the next riding around in the truck checking out other cool parts of Wadi Rum, including canyons, dunes, and petroglyphs. It even broke down a few times, which I think added a bit of embarrassment for Abdulrahkim and Naja, though it was all part of the charm for Rachael and me. Especially when he showed me how to hot-wire it so that he could fix the distributor cap with a spoon. 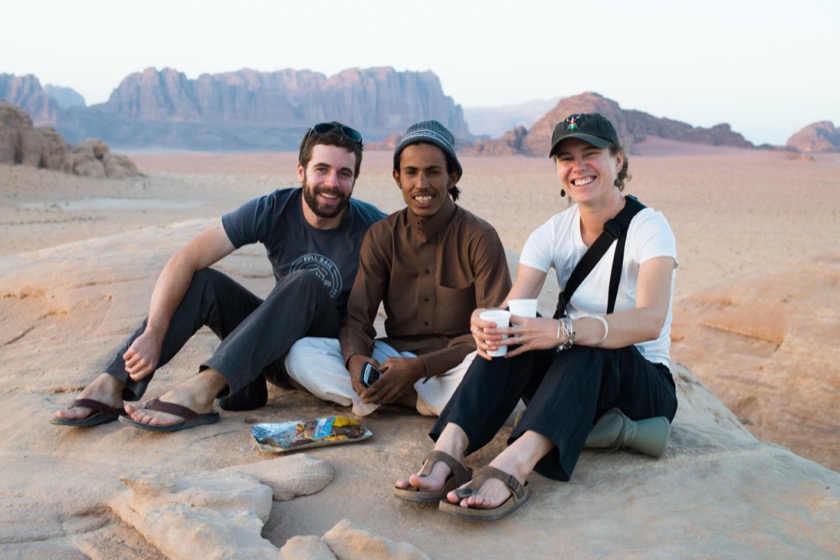 Three days in the desert wasn't enough, but we had to make it back to the other side of the country to catch our flight home to Qatar. The drive back was uneventful (no breakdowns), as was the flight home. As far as one week trips in the Middle East go, this one was perfect.