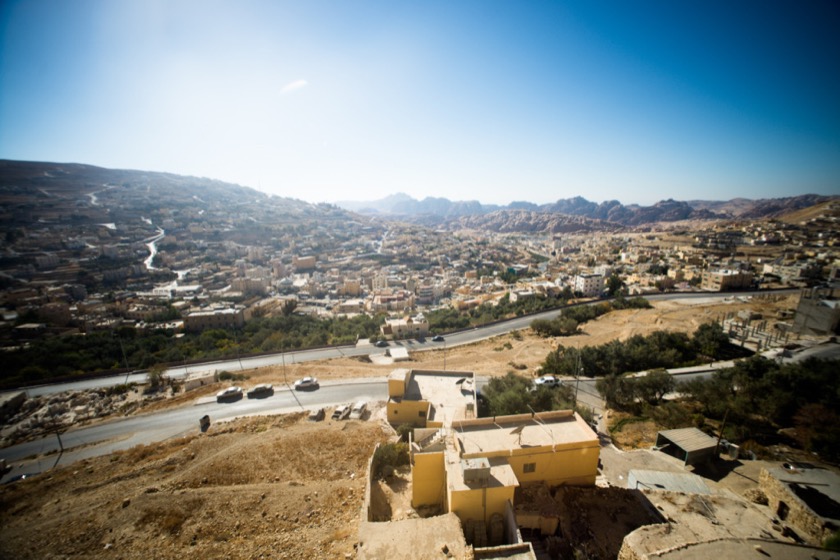 Wadi Musa, which means valley of Moses, is right next to the ruins of Petra.

After trying to wash every last bit of salt off of our bodies after soaking in the Dead Sea, Rachael and I headed south along the coast and then up into the mountains toward Petra, the ancient Nabatean city nestled among towering pillars of sandstone. The drive took us from 1,400 feet below sea level to several thousand feet above it, as we wound up old, mostly deserted roads. The small towns we drove through on the way seemed pretty far off of the tourist trail, based on the gawking looks from adults and the waves from children. 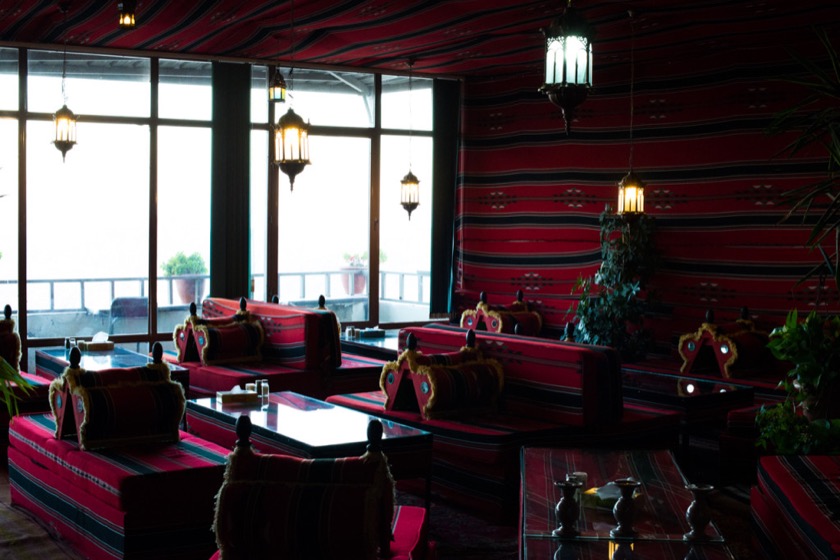 The beautiful common area at the Rocky Mountain Hotel

Once we arrived in Wadi Musa, the city next to the ruins of Petra, we checked into a small hotel that Rachael had expertly researched online called the Rocky Mountain Resort. It was a decent and affordable place to stay, though its real shining quality came from the common space on the top floor. Not only was the view of Wadi Musa magnificent, but the whole place was outfitted with traditional carpet walls, floors, and roofs like a Bedouin tent. We ate our breakfasts and dinner here while during the few days we spent in Wadi Musa. 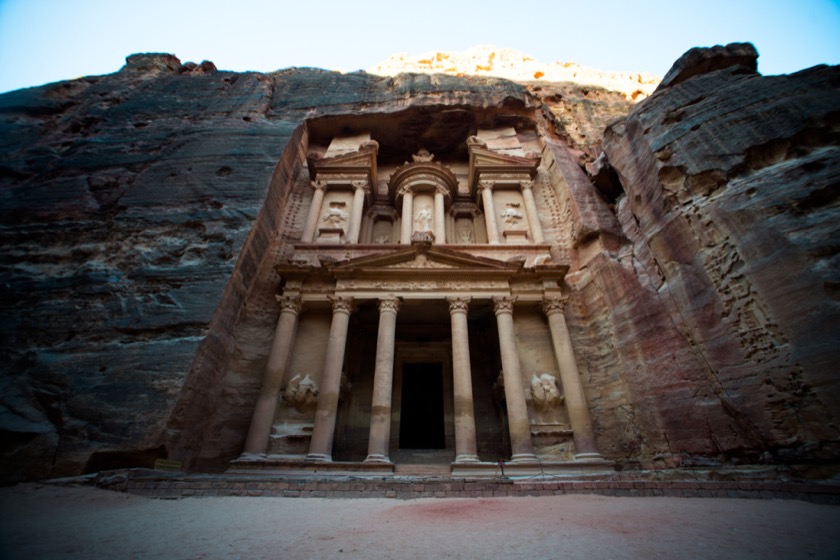 This is Al Khazneh (The Treasury, in English). You probably recognize it from an Indiana Jones movie.

If you came upon Al Khazneh (The Treasury, in English), you’d almost certainly recognize it. You may have seen it in a book, or more likely, in the third Indiana Jones movie, The Last Crusade. It’s one of the first ruins you see when you walk into Petra, and easily the most detailed. But unlike in the movie, it’s admired from the outside. Apparently visitors were once allowed entrance, but not anymore. That’s not such a shame, though. Rachael and I went inside a few of the other ruins, and they’re little more than empty, featureless rooms carved into the sandstone.

While walking through the ruins of Petra it’s easy to get the sense that you’re seeing the remnants of palaces, markets, and other buildings, but apparently the ruins were built as tombs for the dead rather than as homes for the living. 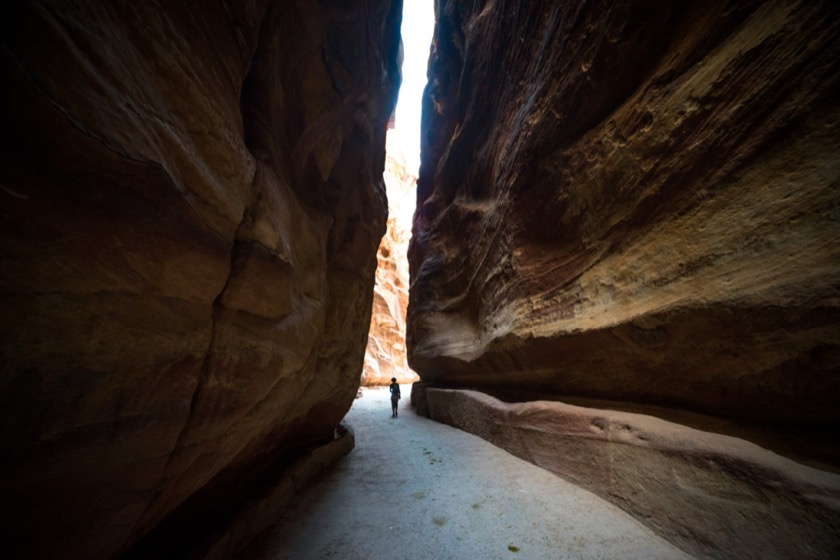 Rachael walking out of Petra through the Siq

The size of the ruins at Petra is impressive, as is the architecture and the way in which they are carved straight into the sides of cliffs. But the thing that I liked the most about Petra was the way we arrived. After purchasing tickets and walking down a dirt path for half a mile or so, we came upon what’s know as the Siq (pronounced “sick,” I think), a slot canyon with walls rising hundreds of feet above. As we walked through the Siq, it became narrower and narrower, until it was just wide enough to accommodate the two of us walking side by side. 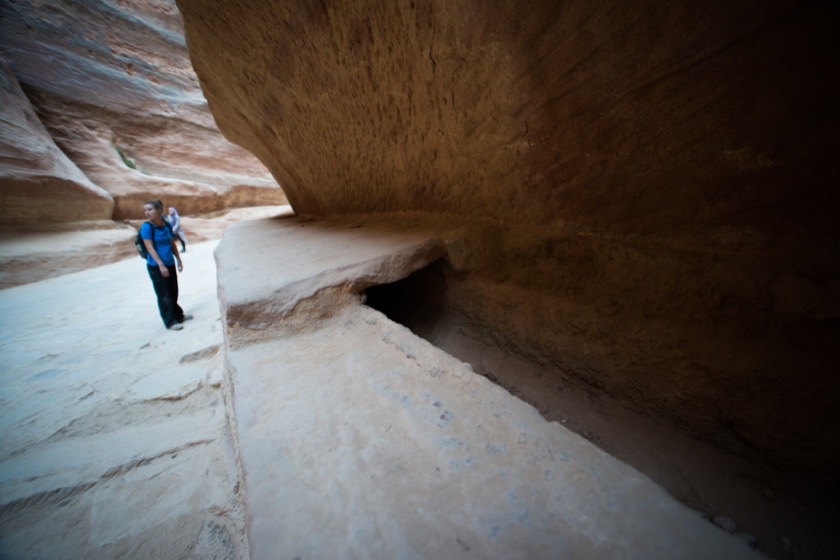 Old pipes carved into the sandstone

Along the walls of the Siq there runs an old terracotta pipe that was used to carry fresh water into the city. Like the rest of the ruins at Petra, it’s carved straight into the sandstone.

Rachael and I spent two days exploring Petra, and hiked at least a dozen miles in the process. I don’t know why I had this idea, but I assumed Petra would be a bunch of ruins all relatively close to one another. In reality, though, they are very spread out, and we didn’t even get to all of them. Maybe it’s better to think of Petra as a few long, steep hikes that take you to a bunch of unique ruins. And the best part about this is if you show up early and strike out on one of the more difficult hikes, you’ll have most if the ruins all to yourself.

We wandered into one of the canyons and quickly found ourselves separated from other tourists and any sign that we were still in Petra. Olive and orange trees grew on either side of the path, and a small stream ran alongside it. We spotted some goats high up on one of the walls of the canyon, and them came upon their herder and his dog. The goatherd coaxed the goats back to the floor of the canyon and then began to lead the goats back downstream. We walked behind him and after a few paces he asked us the inevitable question, “Where you from?” America, we said, and then he handed us a couple oranges he’d grabbed from a nearby tree. They were delicious. As we began to part ways I offered him a dinar for his generosity, which refused until I insisted, saying it was the best orange I’d ever tasted. It wasn’t too far from the truth. 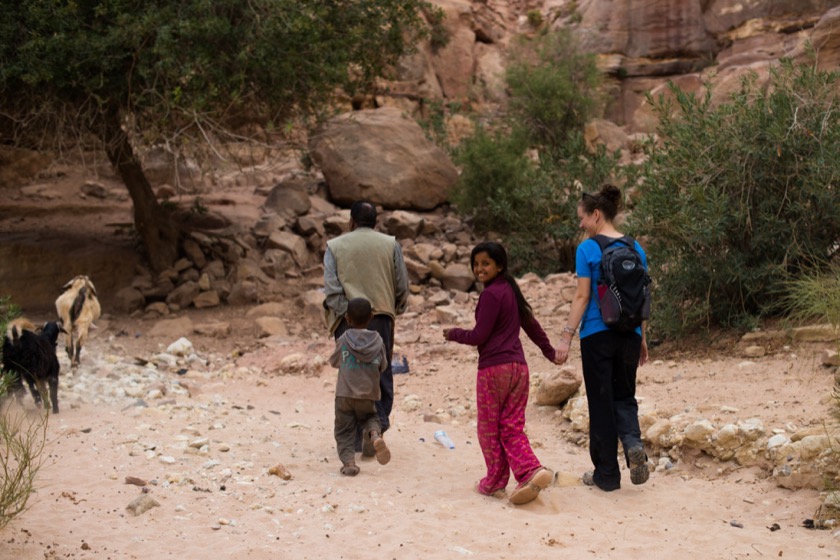 We wandered up a canyon and met a Bedouin family who invited us to share tea.

Once we had walked a few paces away he called after us in broken English. He said that his family was waiting nearby and wanted us to join them for tea. My gut reaction in these situations is to say no, because scams can be shrouded in generosity. But it seemed innocuous enough, so we followed him to a landing up on the rocks where he keeps his goats at night. Sure enough, three young kids ran out to greet him, and he handed each of them an orange from his pocket. He hollered something at his wife and motioned for us to follow.

He showed us the pen where he keeps his goats, a large room carved into the sandstone that was probably a Nabatean tomb 2,000 years ago. It was a good example of the fact that Petra is not simply a bunch of roped off ruins. I saw tombs off the beaten path being used to house souvenir shops, irrigation pipe, generators, and even one truck. I guess you could say that it violates the purity of the place, but it’s hard to fault the Bedouins for taking advantage of tombs built by their ancestors.

We sat with Solomon, his kids, and his wife for about an hour sipping Bedouin tea, a really sweet black tea mixed with sage. We didn’t have a lot of English in common, but frankly there just isn’t always that much to say. I let his kids play with my camera and then Solomon offered to share a cigarette with me, but I declined. Then he got out his wallet, laid out pictures of his wife and three other women, and asked me a question: “Of all my wives, which is best?”