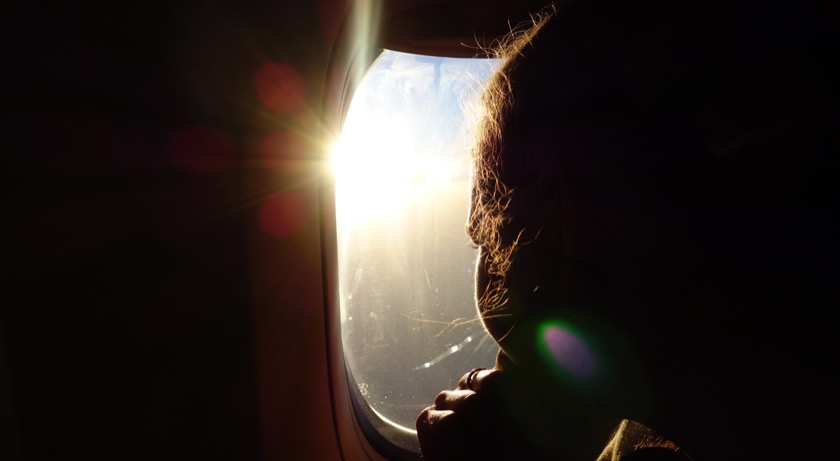 After leaving Chicago on Monday evening, we flew up over Canada, just south of Greenland, through Eastern Europe, and down over Iraq and the Persian Gulf. When we first spotted Doha out the window, it looked like a big, beige nothing (see below). We flew south of the city and then came back around, passing over the school we'll be working at in a few days.

The flight was about 12 hours long, which passes quickly when you can choose from hundreds of movies, including classics like Back to the Future, The Godfather, and Big. I'd heard a lot about how nice Qatar Airways is, and it was, but it didn't blow my socks off (though they do give you a pair to wear around the plane, which is pretty cool). The main differences I noticed from other international carriers like Lufthansa was that the flight attendants were constantly coming through the aisles offering drinks and moist towelettes and there was perfume in the bathrooms.

Qatar is building a new airport for Doha, but it wasn't ready when we arrived, so we deplaned into the hot, sticky air that everyone remembers about their first arrival and then took an air-conditioned bus to the immigration building. To me, this was the moment of truth. Surely something went wrong with our paperwork, or our passports, or something else, and they'd turn us back at the gate. But they didn't. We talked to a young man with braces who wore a spotless white kandura and keffiyeh (who I assume was Qatari) who smiled at Rachael and me when we said thank you in Arabic (shoo-krawn).

We collected our luggage without incident and began to meet more and more people who will be working at our school. There was a woman from North Carolina, a couple from Vancouver, and other people from elsewhere in North America. The two administrators who'd hired us all in San Francisco were also there.

I wasn't expecting much in terms of organization (better to keep your standards low when doing something new), but I ended up being really impressed. The administrators had packets for each of us with a ton of ton of useful stuff, like phone cards and a few hundred dollars spending money, and information, like what we'll be doing for the next few weeks, where we'll be living, how to get a hold of important people. They made little laminated cards to carry with us that had important phone numbers. They even brought a cooler full of ice water. Nice.

The only bad news that we received on our arrival was that we would have to stay in temporary housing because our permanent accommodation, an apartment in a housing development called The Pearl, isn't ready yet. We don't know exactly when it will be, so for now, Rachael will have to make our current apartment our home.

The school's bus and driver took Rachael, me, and the other new employees to our temporary accommodation, which is a nondescript beige (we're establishing a theme here) apartment building in Doha. We got a chance to see downtown Doha from a distance, which was lit up (see above) in bright colors. Our school's principal told me that many of the skyscrapers are empty, built in anticipation of high demand in the future.

We've been here for a few days now, and there's a lot to write about, but in the interest of sparing everyone from a 4,000 word blog post I'll stop here.