One goodbye and a few reflections

One of the unexpected benefits of major life changes, like moving overseas, for example, is the opportunity to take stock of what's around you. There are all the numbers, like how much stuff we shipped (840 pounds), how long it takes to fly from Portland to Doha (about 18 hours), the time change (10 hours ahead), or how long we've been preparing for this move (six months, depending on how you define preparing).

Then there's your stuff, and what is most important to you, which you get a sense for when you decide what you'll take and what you'll leave behind. Yesterday morning I found myself walking to Fred Meyer, less than 24 hours before our departure, to buy dish gloves. Gordy, Rachael's dad, tells me that they'll have dish gloves in Qatar, and I'm confident that he's right, but I have a special kind that I like, so I bought five pairs. Plus a year's supply of contact solution and sunscreen, all the toothbrushes we'll need, a couple boxes of macaroni and cheese (for our first supper, I suppose), and a jar of peanut butter. I'm sure all of that stuff will be readily available there, but buying it here offers a little bit of security plus the realization that I'm a pretty particular person. Packing dish gloves? Really?

Even more important than figuring out what sort of stuff is important, though, is the place, my place. You can find substitutes for things, but there's only one place in the world that gives me the feeling that I'm home, and it's here in Oregon. Hopefully Doha feels like a kind of home eventually, but for a million reasons it'll never really be.

Thankfully Rachael and I have had a lot of time this summer to go to the places that we'll miss. We've hiked a lot in Oregon and Southwest Washington. We've done a lot of trail running. We've traveled to the central Willamette Valley where I grew up and where half of my family still lives. Rachael and I have eaten out a lot, too, in preparation for ten months of Applebee's and Hardee's. (Suellen, Rachael's mom, says that the key to eating in Doha will be to not think about Portland.)

But place isn't just about cities and forests and restaurants. Yesterday I spent the better part of an hour running my fingers through bright green grass and looking up at a perfectly blue sky. They say it's often brown in Doha.

And finally, there are the people, like my brother and sister, pictured below. One thing I've heard a lot of in the weeks leading up to our departure is how sad it'll be that we won't be able to see family and friends until next summer when we take our first trip back. I can't help but agree, because it's sad. But I also have to remind myself that seeing friends and family every day because we live just down the street, or even in the same house, isn't part of the culture we live in. We get together every few weeks and I'm OK with that. 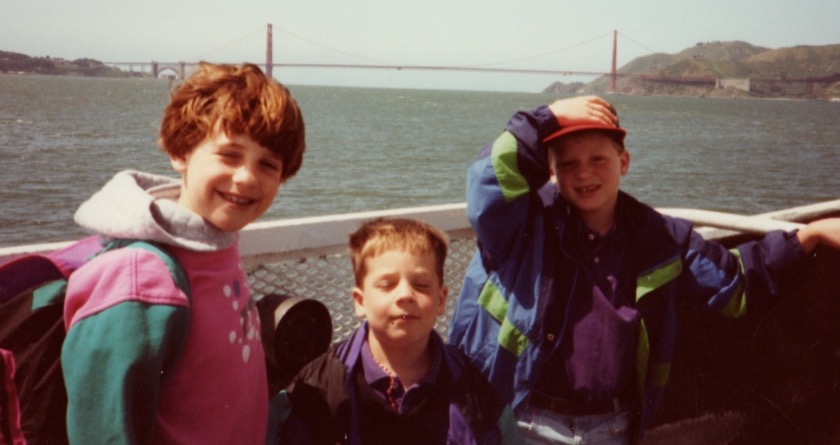 The beautiful thing, though, is that leaving for an extended period of time has brought a bit of clarity to my relationships. Rachael and I threw a going away party a couple days ago and I saw a handful of people I hadn't seen in a really long time. Would we have gotten back in touch otherwise? I doubt it. And going away breaks us out of the daily monotony that we fall into when we know that there's always next week to say how we really feel. My dad called me yesterday to wish me a good trip and to tell me that he loved me. Don't mean to get too personal here, but we don't say that a lot. 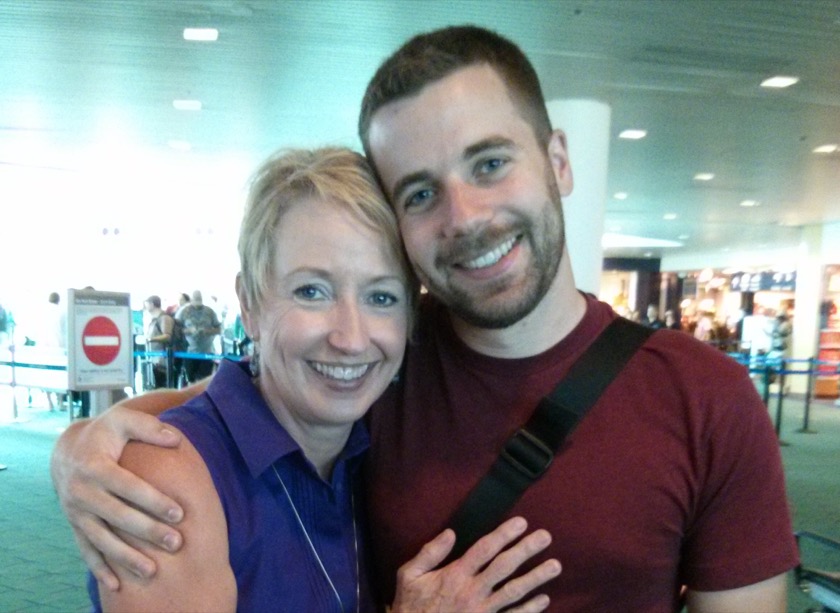 Rachael's folks Gordy and Suellen accompanied us to the airport, and my mom and sister Kjerstine came along with Kjerstine's kids, Claudia and Frank. I hadn't prepared myself for the goodbye, but when I hugged my crying mom (pictured above, pre-tears) and started to leak a few tears of my own, the gravity of what we're doing became a little bit more real.

So there it is. The things, the places, the people. And a goodbye, for now.

Photo at the top by Aaron Hockley.