The things I worry about in Lebanon 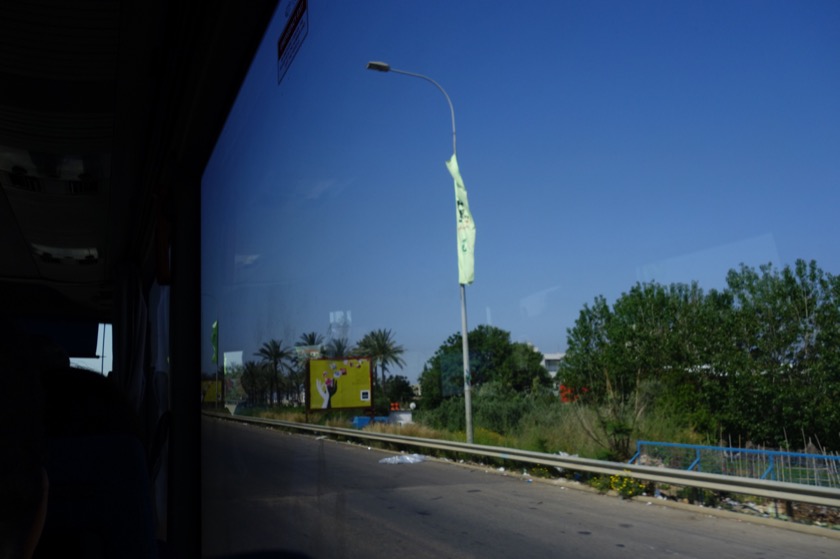 When I first started to tell people that Rachael and I were moving to the Middle East, and that we were taking a short trip there in May, one of the first questions people would ask was: "Is it safe there?" What they're really asking, I think, is if petty crime is high, whether kidnappings are common, or if Qatar or Lebanon is a sworn enemy of the United States (they're not).

I can't speak for Qatar since we haven't moved there yet, but I feel relatively safe in Lebanon. That's just my perception, of course. I'm not an actuary, and I can't say for sure what is safe or unsafe here.

That said, there are two things here in Lebanon that make me fear for my safety [Mom, you can stop reading here]: Violence as the result of terrorism and war is the minor worry, and cars, motorcycles, or basically anything with wheels is the major worry. I'll start with the minor worry.

Yesterday we traveled to a Anjar, which is right on the border with Syria, and to Baalbek, the headquarters of Hezbollah, which is classified as a terrorist organization by the United States. It's important to point out though that Hezbollah isn't an international network like Al Qaeda. It's a political party in Lebanon that gained prominence for driving Israel out of the country in 2006. They build hospitals and schools, and hold seats in parliament. In many ways, they're not so different from political parties or the military in any country: they want to defend their people, and they'll do some unsavory things to accomplish that goal. That said, they have been accused of suicide bombings against Israelis, Americans, and people from France.

Needless to say, the fact that we were traveling in Hezbollah territory was never far from my mind. The neon green Hezbollah flag flies from many lampposts, and they've erected large posters on the sides of highways in commemoration of their martyrs. All of this is compounded by the fact that Hezbollah is aligned with Assad and the Syrian government, which the American government could eventually be at war with (not probable, but possible). It's less obvious to the naked eye, but it still makes you think.

So how would all of this effect my safety? I don't know. I guess that if the United States did enter some sort of conflict with Syria we'd probably avoid the Hezbollah regions of Lebanon, if not the entire country. But it still occupies my mind. I don't like to be in tightly crowded areas, whether in or out of a vehicle, because it makes me think about a bombing. Similarly, I'd rather not be in big groups of Westerners because I know it makes us stand out. We're probably totally safe, but every once in a while I think I consider the fact that if someone wanted to hurt a bunch of Americans and make it into the news, we'd be an excellent target.

Despite my occasional worries, recent history says that getting hurt or killed in Lebanon as the result of violence is unlikely. Unfortunately, I don't think I can say the same for my major worry, which is getting hurt in a car, or getting hit by a car.

When we drove in from the airport a week ago, the first thing that stuck out was the lack of people wearing seat belts. This isn't uncommon in many countries, and I suppose I should've expected it, but it still caught me off guard. Next was the traffic: fast, rarely staying in lanes, weaving in and out. Again, not uncommon, but still a dramatic transition since it's been a couple years since I've been out of the country. One thing that I saw on the drive into Beirut that I hadn't seen anywhere else was a handful of kids on street motorcycles popping wheelies at 60 miles per hour. I suppose there's a first time for everything.

After a few days walking around and riding in taxis, I began to sense that even though the drivers appear crazy, passing and weaving with tiny margins between their cars, they can actually be sort of courteous. You have to look closely, but they'll let one another pass and merge. Not so surprising in the United States, but you don't expect it in a place like Lebanon.

Still, you can't help but think about safety. Especially after seeing car accidents and blood on the road.

Our hosts, Rachael's aunt and uncle, don't often buckle up in cabs, even when seat belts are available (they aren't always). I'm not sure if they've grown used to the local customs or if they just don't expect anything bad to happen, but I still find myself reaching for the seatbelt as soon as we get in a car. When my seat has a belt and Rachael's doesn't, I reach my arm over her in the totally unrealistic belief that I could keep her safe if we got into an accident.

When it comes to being a pedestrian, I'm constantly reminded that even when I'm walking on the sidewalk, it's not really my turf. Cars are often parked there, and sometimes people drive their scooters and motorcycles down the sidewalk when the traffic is particularly bad.

So there you have it, the two things I think about while I'm walking around Lebanon, trying not to stand out, and looking both directions before I cross the street.