How to import and organize photos wirelessly and automatically

Once I got a phone with a camera on it, saving and cataloging my photos became a bit more of a challenge. Instead of just managing one stream (as in, one camera, one SD card, one import process), I had to worry about two streams. I needed to make sure tags and dates were consistent and that everything ended up in its right place. Also, I wanted to take advantage of wifi, data networks, Dropbox, and other services to make it as automatic as possible. This is what I came up with: 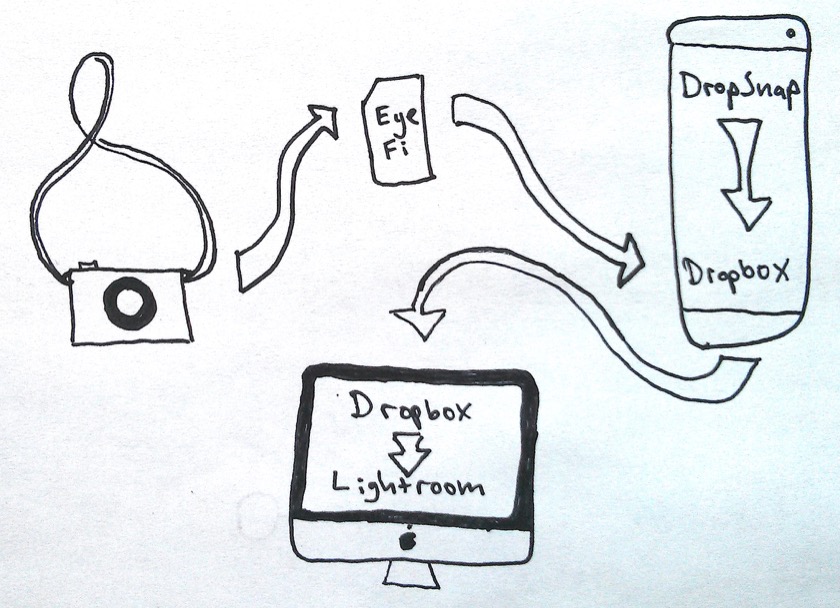 In a nutshell, I'm using a variety of simple services and technologies to move photos from their first home (an SD card or my phone's memory) to their final home (the Lightroom catalog on my iMac). Here's a step-by-step rundown:

The process is essentially the same when taking pictures with the camera on my phone, except that it starts at step 4. It seems really complicated, but it wasn't hard at all to set up, and once it's going, it's totally automatic.

The process is fast, too. It takes about 17 seconds for an image taken with my phone to end up in Lightroom, and a little over six minutes for my point and shoot. The time delay with my point and shoot stems from the fact that the service that I use to transfer images from one folder to another in my phone, DropSnap, only updates once every five minutes. In any case, a few seconds to a few minutes is plenty fast, since it's very rare for me to take a photo and need it to show up on my computer immediately.

The one drawback to this sort of system is that there are lots of links that can break, and when if one does, it doesn't set off any sort of alarm that something has gone wrong. In order to prevent the deletion of important photos, I always copy my SD card's contents to an external harddrive before clearing and formatting them.