Surviving Boston's blizzard and why I love snow 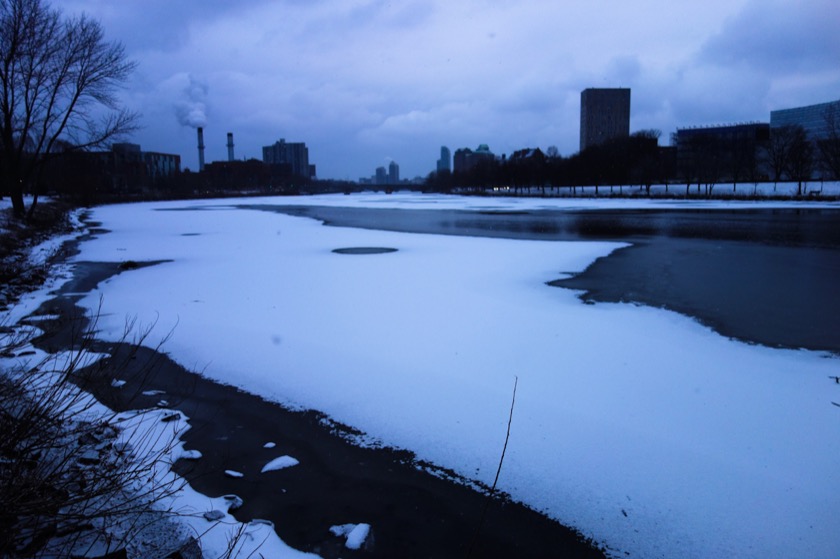 In the middle of the week Tim said he'd heard there was a major storm heading for Boston. Several feet of snow, lots of wind — a real nor'easter. I was skeptical at first, since the weather services I check (AccuWeather and Weather.com) weren't predicting anything major (it turns out that Wunderground had been predicting a major storm since early in the week). Within a day there was a winter storm watch, then a winter storm warning, and then a blizzard warning. The storm was coming. 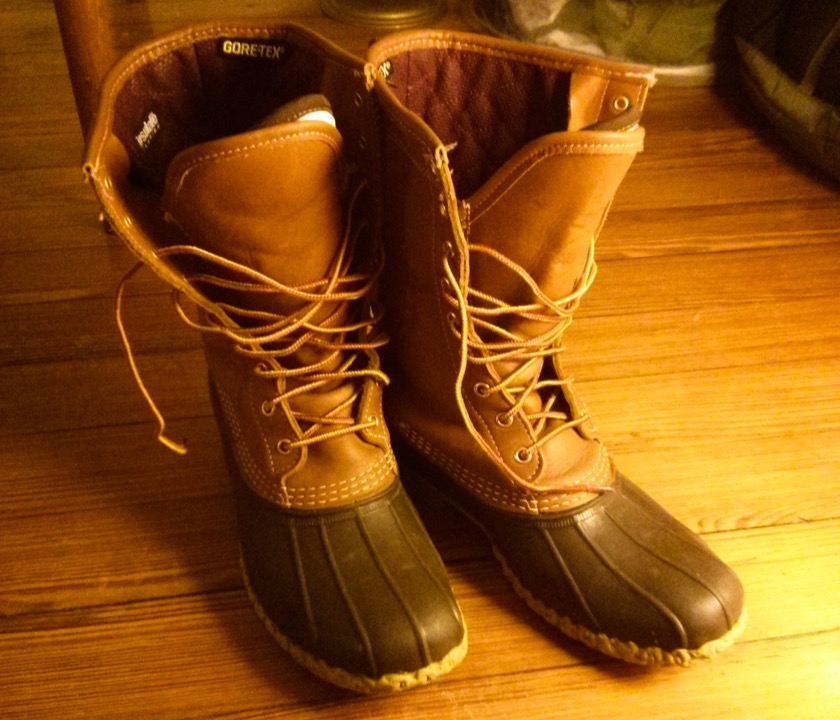 I bought these boots a few months ago in anticipation of exactly this type of storm and I couldn't wait to use them.

I left work a bit early on Friday and headed home to wait out the storm. Tim had started a fire and I spent the afternoon painting and then most of the evening making some snowshoes (Rachael and I bought some snowshoes earlier this year but I left them back in Portland). I was pretty proud of the snowshoes. 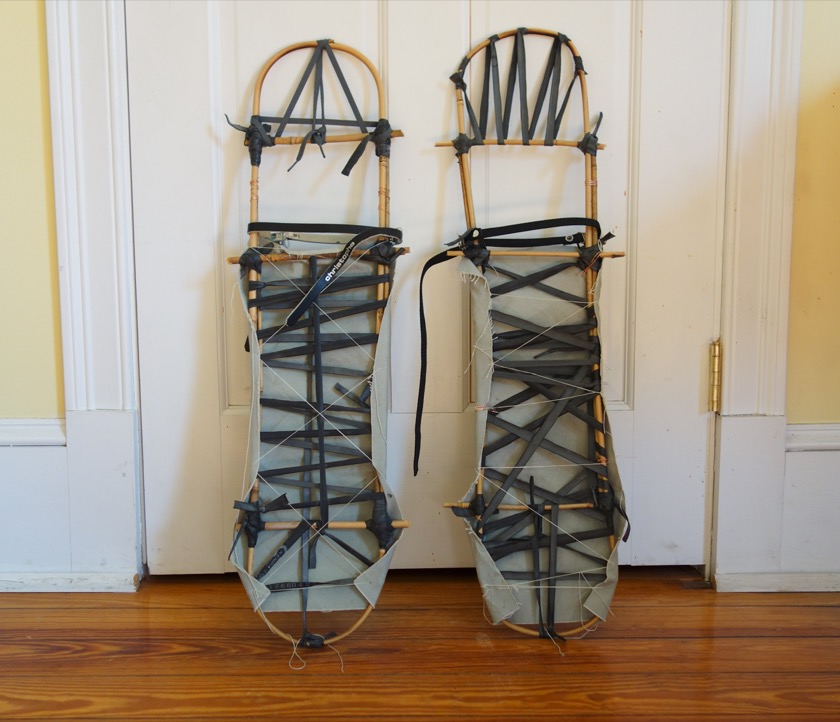 It took me a few hours to make them, but their construction was greatly facilitated by the fact that we had curved bamboo (for gardening) in the basement. That made up the basic form of the snowshoes, and then I used straight bamboo as cross-braces. The initial fastening was done with copper wire, but that doesn't respond very well to constant flexing (as walking would entail), so I went back through and reinforced the frame with rubber strips cut from old inner tubes. I then used the same inner tubes as webbing to trap snow. This turned out to not offer enough support (there was already a few inches on the ground, so I was able to take them out in the snow and test) so I finished them by wrapping duck cloth across the back two-thirds and attaching it with needle and thread from an old hotel sewing kit. The final foot attachment was done with toe-straps from bike pedals (one of the handiest pieces of equipment a DIYer can have in their toolkit). I ended up not needing heel straps since the toe-straps gripped the rubber of my boots very effectively.

Hiking in the snow 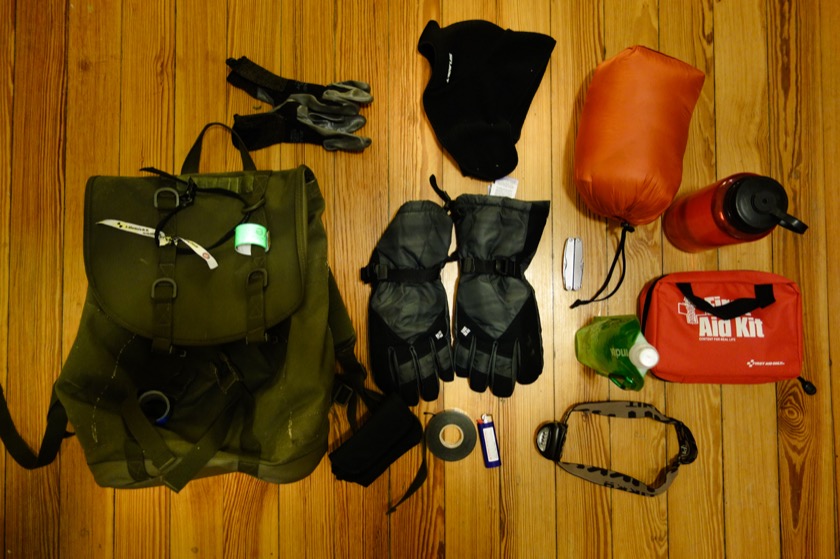 A friend up the street was having a party which I planned on attending, but before I got there I wanted to walk out in the snow and soak in as much of it as possible (without succumbing, of course), so I packed a bag with a bunch of supplies should I or anyone else need help and set out into the storm. This was a little after 8 p.m., when there was probably about six inches on the ground. I purposely left the snowshoes behind because I didn't want to rely on them only to have them break. Snow boots and gators ended up working fine, though my walk probably would've been easier with the snowshoes. 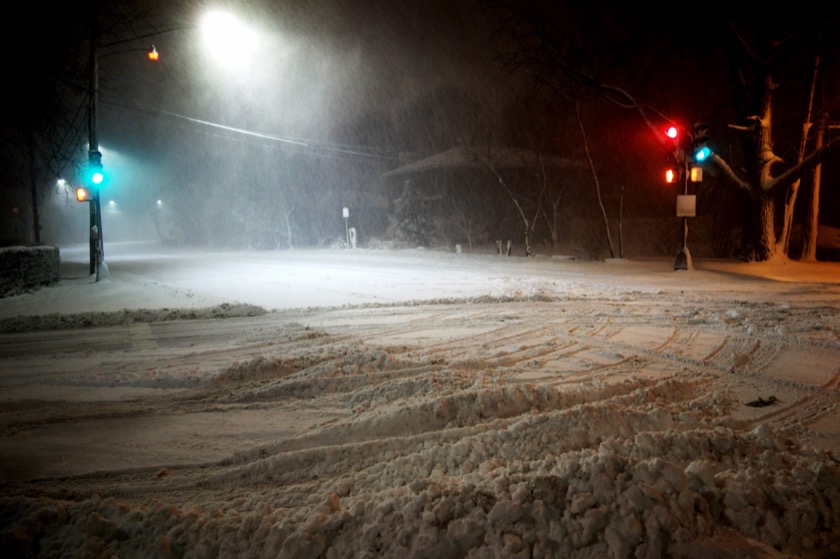 This is the intersection a few blocks from my house. Roads in Massachusetts had already been closed for several hours, but there were obviously a lot of snowplows still on the roads. 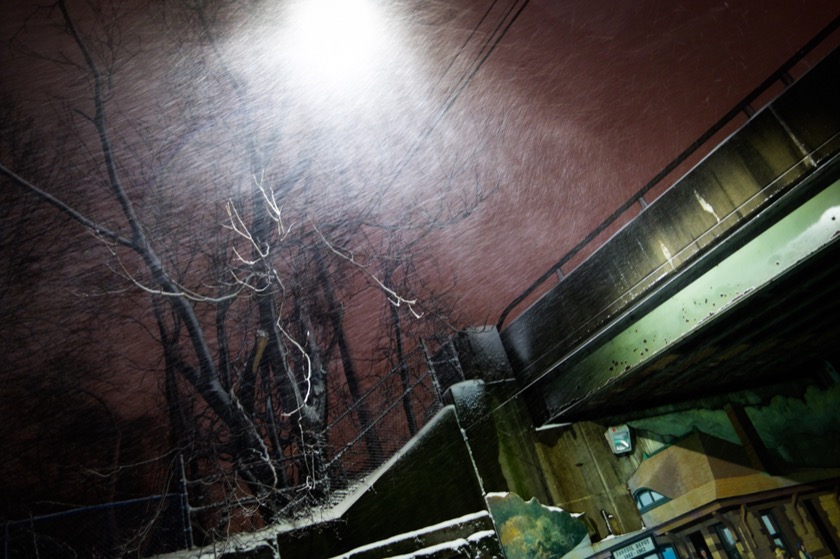 It was also very windy, and made walking into the wind very difficult. Bringing along clear safety glasses (I didn't have any ski goggles) turned out to be a really good idea.

It was very surreal, like a windy, snowy apocalypse had come and taken all of civilization away. When I preparing for my journey out into the snow, I was half-expecting the camaraderie that snow storms like this one bring to my home state of Oregon. People come out of their houses to play in the snow, and they talk to one another. But this was different. The storm was obviously much more powerful than those I'd experienced in Oregon, and folks here in Massachusetts were smart to hunker down inside. I quickly realized that going for a hike at the height of the storm made you a little bit crazy, and so I suspected anyone I came across out in the snow as crazy like me. One guy who I ran into along the Charles River said good evening to me, but that was about it.

Not that there were many people to run into anyway. It was all very desolate. 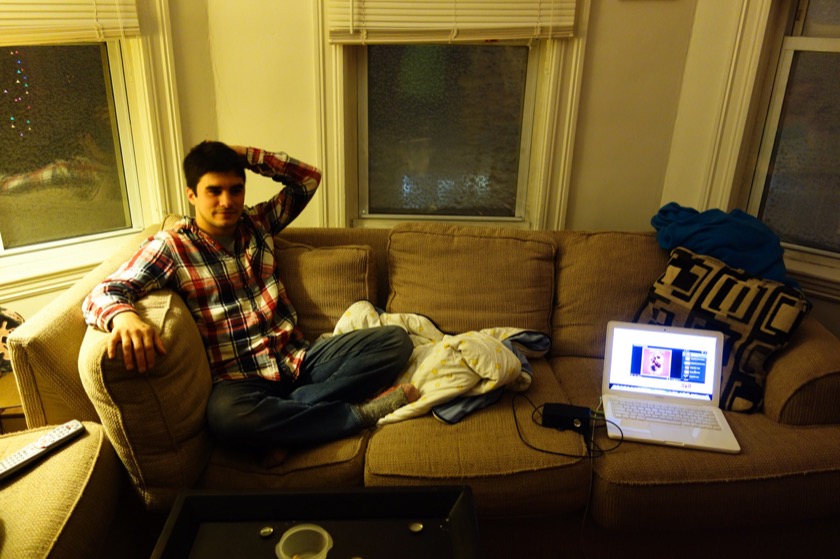 Having walked out in the snow for a little over an hour carrying my backpack full of survival supplies, I eventually ended up at my friend's party. Here's Tim there chilling on a couch. 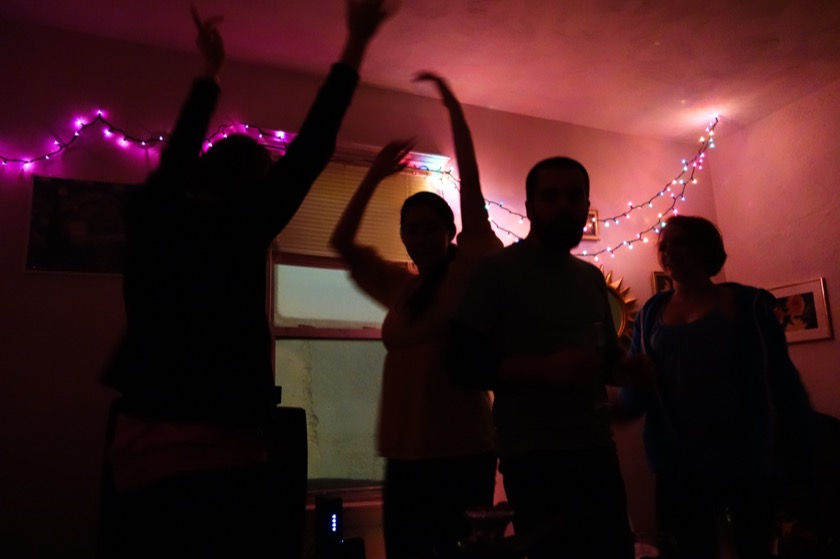 We did some dancing, and then I headed back out in the snow to visit some other friends at a bar up the street. 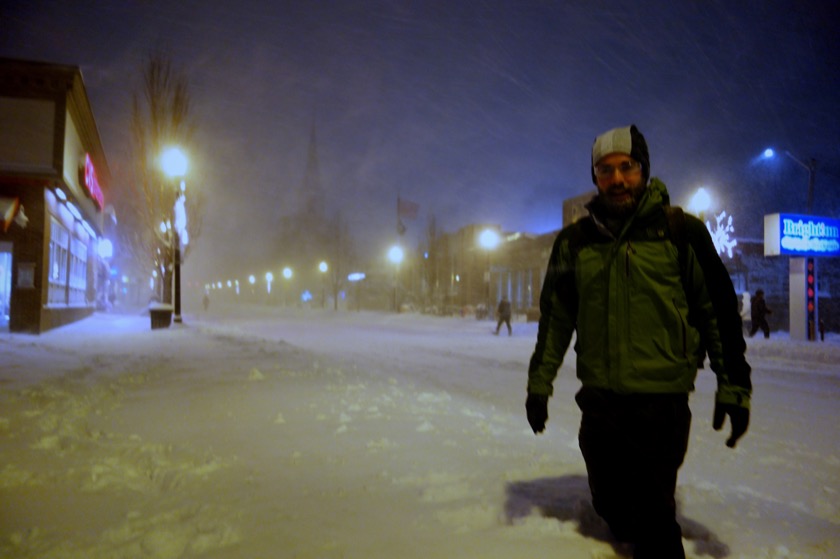 The snow was blowing much harder now, and it was nearly impossible to face the wind head on. I walked up the street for about half of a mile and developed an awful ice cream headache from the wind on my forehead. It wasn't actually particularly cold at this point, but the wind was blowing extremely hard, and humidity was in the nineties, making the cold much less bearable. 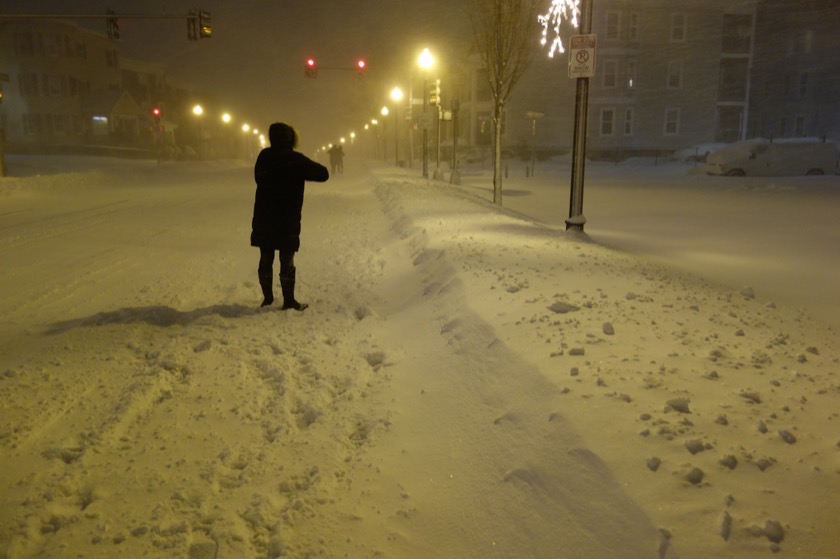 This is my friend Sara walking back down Washington Street after we closed down the bar. 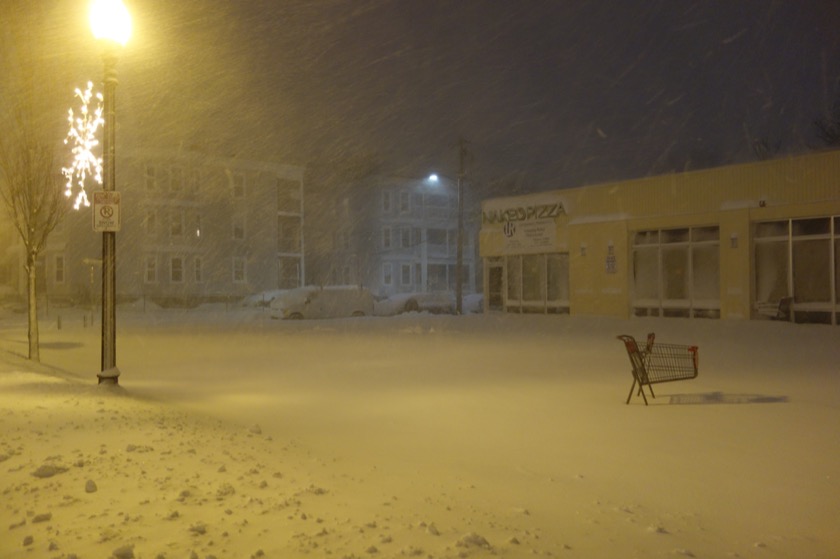 There was maybe a foot of snow on the ground, drifting higher and lower in places. 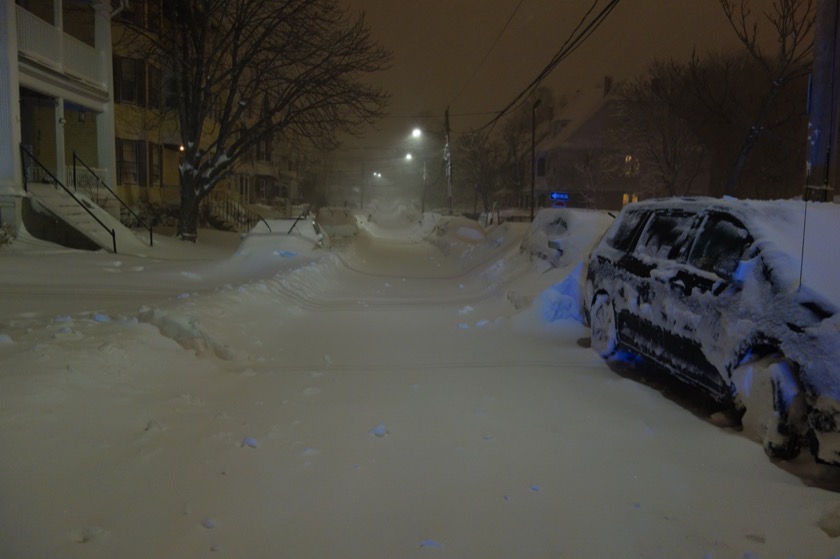 The main roads were still being plowed, but I think it was around this time (3 a.m.) that they stopped plowing side streets. 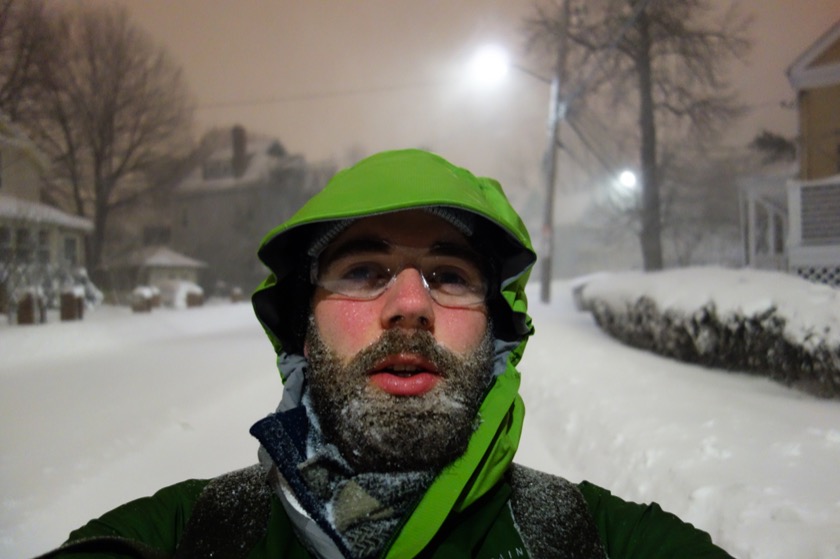 On of the best parts of my excursions out in the blizzard was how my beard accumulate snow and ice. My face would've been much less insulated — and colder — without it. 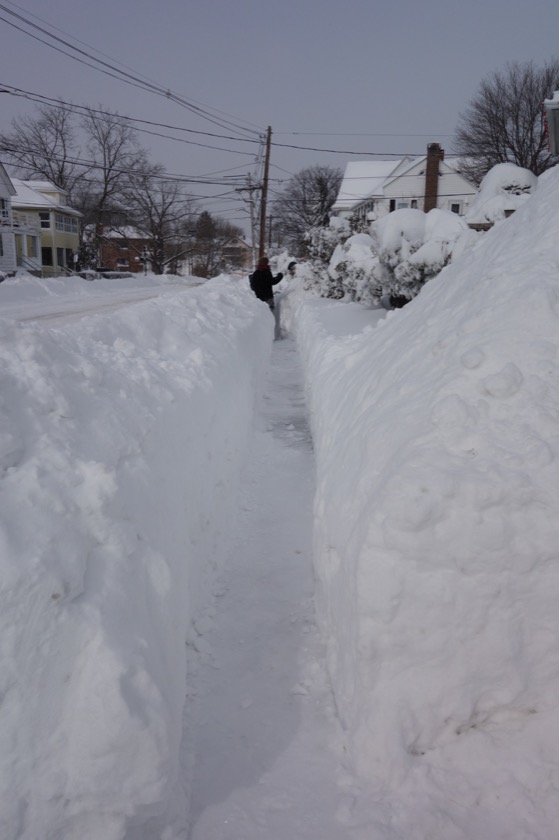 There was somewhere between two and three feet on the ground, so I started with a path out to the sidewalk. Then I shoveled a narrow path down our sidewalk (which I'm told we're legally obligated to do within 24 hours of the storm). I was generally leery about running into other people out in the snow late at night (since they were likely crazy like me), but during the day it was different. People were out on the street, walking around. They were shoveling their sidewalks and driveways and offering to help one another. I never realized I had so many neighbors until I saw all of us outside shoveling snow. 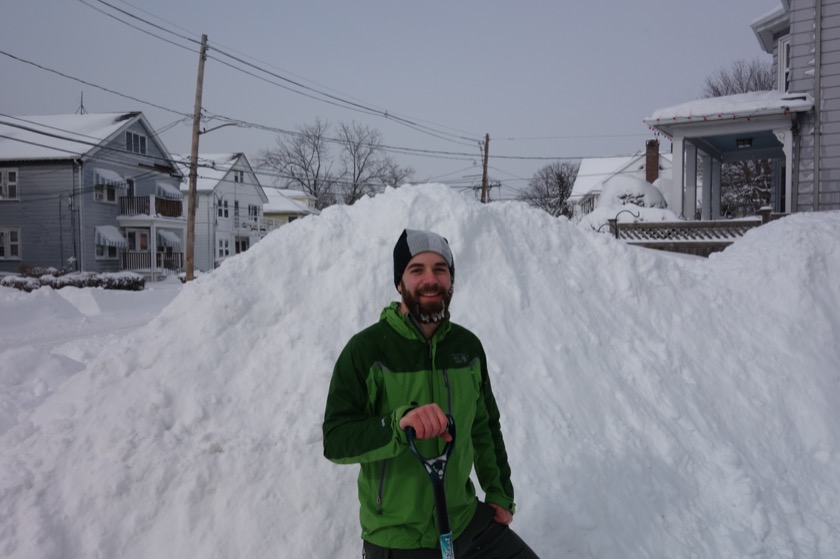 After that me and my upstairs neighbor, Khalil, and I worked on clearing a path for the cars to get out of the driveway. Tim and Cassandra came out a bit later, and we spent a few hours clearing snow until there was a pile about eight or nine feet tall. 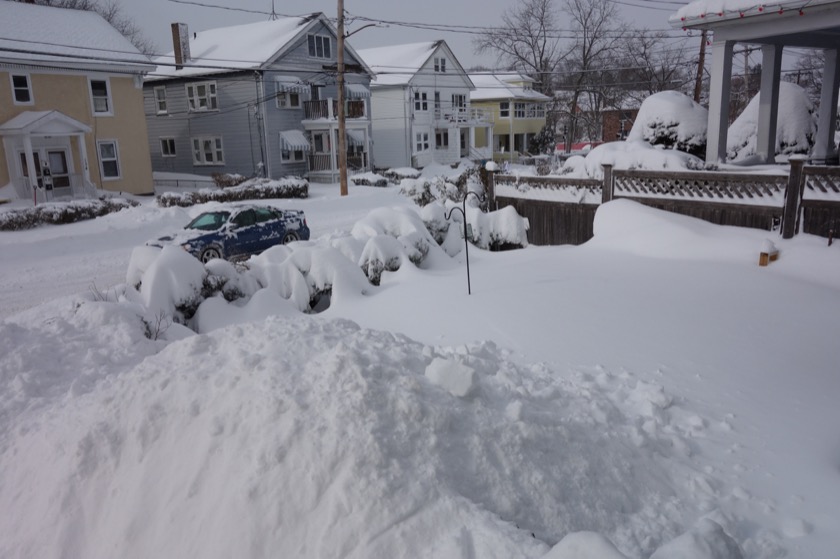 I took this photograph from the porch. You can see the corner of our woodpile at the side of the yard near the fence. That piece of wood is about three feet tall.

Why I love the snow

For one, pedestrians retake the cities, at least to a certain extent. When the snow is deep and the roads are unplowed, as many of them were, you're much more able to get around on two feet than by car. And people walk in the middle of the road. It reminded me of the feeling I get at a street fair or other event that requires the closing down of a road so that people can walk around. You get that feeling like, "Should I be walking where cars usually rule?" And then you realize that as a pedestrian, you were here first.

But perhaps more importantly, I love the snow because of the way it changes how we see one another. People help out, they smile, and they introduce themselves. Eventually the snow will melt and we'll fall back into our old habits, but that doesn't change the fact that once upon a time a snowstorm came along and helped us imagine what could be.