How Twitter, IFTTT, and Readability can get together again

Second Update: All of this is now irrelevant, because IFTTT has added back its Twitter triggers. Hooray!

First Update: Twitter changed their API in March 2013, so this doesn't actually work anymore. I'll update this page as soon as I find a solution.

I used to use Twitter and Readability in tandem to find and read stuff online. Twitter to find out what to read and then Readability to do the actual reading. The workflow was simple, thanks to IFTTT (which stands for 'if this then that'). Whenever I saw a tweet about an article I wanted to read, I'd favorite it. IFTTT would take the corresponding link and send it to Readability to be made pretty and legible. I could then use Readability to read on my computer, phone, or Kindle. It was simple and beautiful, and I used it a lot. Not anymore.

Twitter updated their API (application programming interface) which limited the ability of other apps and websites (like IFTTT) to use the social network. So the old system doesn't work anymore and I've yet to figure out a substitute.

I stumbled upon a post the other day by Daniel Callis about how Twitter publishes RSS feeds of search, a user's tweets, and a user's favorites. I was hoping I'd be able to use to bring back my old favorited tweets to Readability system, but so far I've had no such luck. Here's why: IFTTT doesn't allow you to pull a URL that directs to an article out of an RSS update to then send along to Readability. 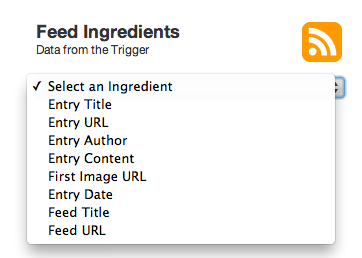 In a perfect world, this is how it would work: I'd favorite a tweet. That tweet would then be added to my Twitter favorites RSS feed (https://api.twitter.com/1/favorites.rss?screen_name=alexinfact). IFTTT would see the new favorite and pull out the first URL and send it along to Readability. Favorited tweet becomes Readability article. Everyone's happy.

Although I don't yet have the chops to hack this together myself, surely it's something that IFTTT and Readability could figure out. So guys, can you do it?