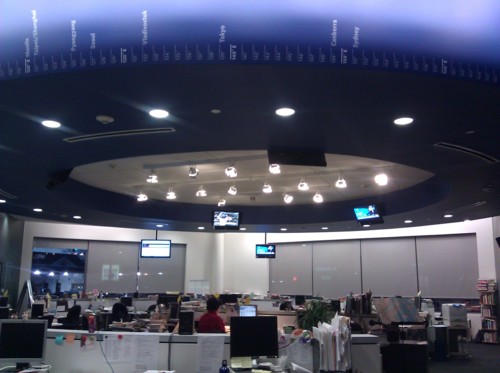 I’ve been in Boston for a little over ten days now but I feel like I’ve accomplished a lot. When I first arrived I had a suitcase and was renting a room from a fellow WGBH employee. For the first week I ventured no further than from the apartment to WGBH, which is only a block and a half away. Part of this was because I got sick when I first arrived, but fear was a big part of it too. I felt so disoriented and insecure that to try anything new was unthinkable. Better to just get comfortable in my tiny corner of the world and then figure things out from there.

I took my first trip out of Brighton (the neighborhood where I was staying) last Friday. It wasn’t much, really, I just walked to the T (Boston’s above ground subway) and rode it to a place called Faneuil Hall in downtown. I walked around a bit, took a few pictures, ate some macaroni and cheese for dinner, and then got back on the T and rode home. Like I said, not much to it. 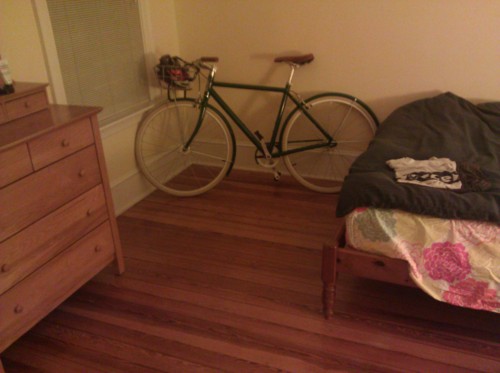 I spent the next day, Saturday, searching for a bicycle and moving into my new place in Brighton. You can see the bike above. It’s a single speed from Specialized and I’m really happy with it. It’s hard to tell from the photo, but it has a basket on the front, matching green fenders, and a decent leather saddle. So far I’ve ridden it home from the bicycle shop, to the grocery store ($100 worth of groceries seems to be it’s maximum capacity though I could fit more with another basket), and to MIT to deposit checks. I can’t say how much happier I am with a bike. I have no intention of using a car here, and I don’t like planning my life around public transit schedules, so the bike is what makes me feel like I’m not trapped wherever I am. Walking is fine, but riding a bike puts wind in your hair, and it’s a helluva lot more fun.

The room you see in that photograph is my new bedroom. It’s in two family house in Brighton. It’s about a ten minute walk from WGBH, which makes a big difference for livability. My roommate works as a private pilot for a businessman. We get along really well. The only two downsides to the house are that a family with three (sometimes noisy) kids lives upstairs, and I’ve yet to find a good way to get my bike in and out of the house.

I’ve now completed my first week at WGBH. I’m not integrating myself there as much as I should, but it’s difficult when my mind is constantly in New York on the show I work on down there. It’s funny, I moved to Boston so that I could work on a show in New York. Don’t worry, the irony is not lost on me.