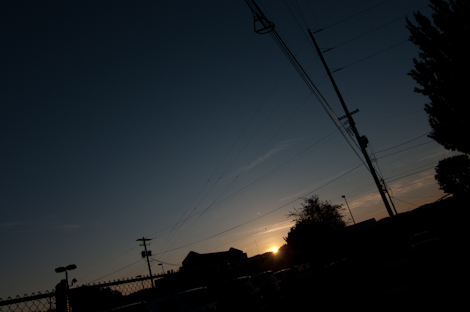 Day 25: This photograph is typical of my photos a day in a few ways. It was taken literally right as the sun was setting. I have a tendency to put things off until late in the day, till that last sliver of light is disappearing behind Forest Park in the west. I headed out with my camera a few minutes before this photo was taken in hopes of capturing the feeling of a bluebird day near the end of October. I failed at that, I think. I was going to go to a nearby park to show the bare trees contrasted with the blue sky but I ran out of time. Even so, this is a decent alternative. My house is in the center of the city and flanked by several car dealerships so it's difficult to capture spare, empty images. That makes it difficult to focus an image on a subject. But this photograph has a fair amount of breathing room, clean lines, and a clear subject. I like it.