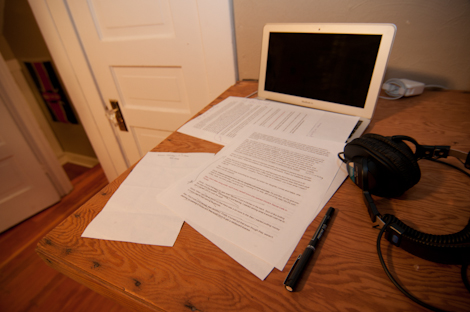 Day 10: Earlier today I was live on the radio for 22 minutes. I was picthing for OPB's membership drive with Casey Negreiff. It was only my second time live on the radio, but I felt great about it. I got a few compliments, too. I was thinking that I ought to take a picture of the stuido I was pitching from so that I could remember the day, but then I forgot.

I came home later and set to work on  another radio project: a story for Destination DIY. I had an ear edit (where I read my narration and play clips from the story) at 5 p.m. with Julie. I spent a couple of hours working on it but by the time we went over the piece together it was clear that there was still a mountain of work to be done. I still had more tape to gather. I still had to flush out my narration. And I still had to figure out why the story was worth talking about. Julie was kind enough not to say so in as many words, we both knew that it sucked. So you win one (live pitching) and you lose another (produced piece). The lesson of the day is that I can only expect to be good at things I've practiced, and in the world of produced pieces I still have much to learn.

I'm realizing now that none of this has much to do with the photograph, which is just a simple capture of what my computer and scripts looked like at 8 p.m. this evening. I suppose this whole project will be much more meaningful if I attempt to record my thoughts and my feelings, too, instead of just what I see. Edits included cooling off and a boost in exposure.