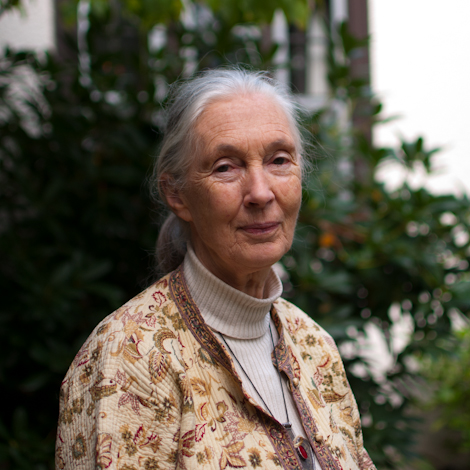 Day 6: I went to Salem this morning with Dave Miller for Think Out Loud's interview with Jane Goodall, the primate researcher, humanist, and all-around extraordinary human being. While we were setting up for the interview I asked as nicely as I could if she'd be open to my taking a photograph of her. She said yes, but preferred it to be later on, once she'd had a chance to wake up and adjust to the light.

After the interview I spent about 30 seconds photographing her inside, which wasn't ideal because the color of her sweater was very similar to the color of the couch. It looked like she was wearing camouflage. So we went outside and stood in front of the small old house where Dave had interviewed her. It was clear that she wasn't very excited about having her picture taken. She told me so, though not in as many words. Even so, I appreciated her honesty and her willingness to spend a moment with me.

Needless to say, I rushed. I only took five photographs — four far away and then this one up close. I used a 30 mm lens and set it to its widest aperture of f/1.8. The depth of field made a huge difference, and so did the lighting. It was shortly after ten o'clock and overcast, which was perfect. But the most important factor was her facial expression. I can tell just by looking at her that she believes in something.