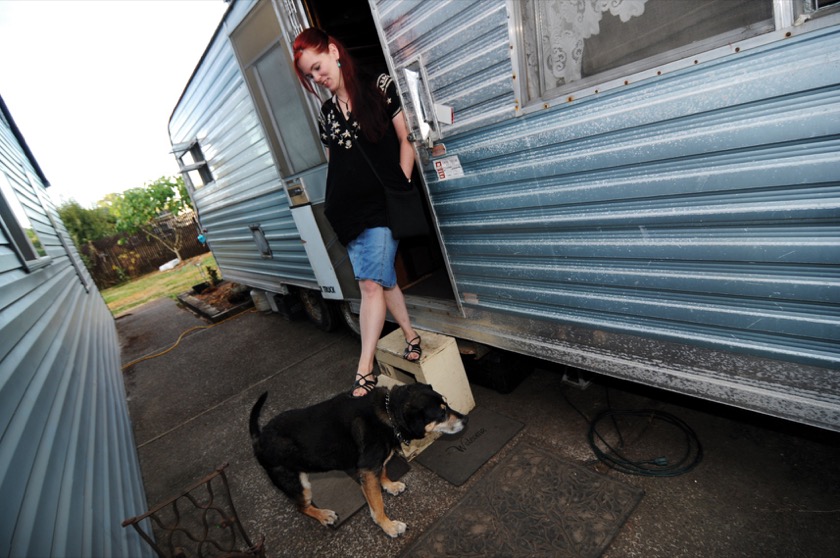 Last week was one of the busiest I've been through since starting at Think Out Loud about a year ago. I was able to pick up some extra hours since two other producers were out of town. Extra hours means I'm actually able to produce upcoming radio shows instead of just managing our blog or fielding telephone calls for that morning's show. I'd much rather do radio production, but it's not always an option when I'm only working 16 hours each week. Anyway, I had more hours to spend on production and put together two segments for Thursday and Friday.

The first segment was pegged to the release of regional poverty numbers from the Census Bureau. National numbers had come out a week or two earlier and we wanted to get a look at how Oregon compared to the rest of the country. But the numbers wouldn't actually be out until Thursday, so I couldn't really prepare for them, and anyway, the numbers were just boring me in a way that they shouldn't have. Which is not to say that poverty is uninteresting. I just don't think there's a whole lot you can do, from a storytelling perspective, with a statistic like "16 percent (say) of Oregonians live in poverty."

So I did a bit of research on what people were saying about poverty and came across a study from the Heritage Foundation, a conservative think tank. It gave statistics like "80 percent of poor households have air conditioning" and others, mostly about material ownership and hunger. The study never came out and said this in so many words, but it seemed to be making the argument that poor people in the United States are much better off than most people give them credit for. I'm a bit embarrassed to admit this, but I had no idea there were people in the world who would argue that poverty is not as big of an issue as many people make it out to be. In retrospect, it makes sense that some people would argue that. I'd just never considered it.

This got me thinking how we define poverty in the U.S. What's it like to live on less than $22,000 a year if you're in a family of four? Or below $15,000 if you're a family of two? Rather than get together a couple of talking heads to discuss what it was like to live in poverty, I figured I'd just find a good talker who met the description and ask her what her life is like. That's where the Public Insight Network comes in.

The Public Insight Network is a partnership among media outlets designed to help those outlets find sources for their stories. OPB has a few thousand people in its network, and when we're working on stories we can send out inquiries (often referred to as "pinquiries") to our PIN members. We can also search responses to other pinquiries to see if someone has the experience we're looking for. I wanted to find someone who fell below the Census Bureau's definition of poverty, so I and our PIN journalist searched words like "poor" and "poverty." This brought up a lot of opinions about poverty, but not much personal experience, so we tried a different tack. A search for "food stamps" came up with a lot of people with personal experience. The first woman I called ended up being one of two guests for the segment. Her name is Kristina Robb, and she lives in a trailer behind her in-laws' house in Albany, Oregon.

Most of the work on that segment was done on Tuesday and Wednesday. My executive producer and I decided it would be best to take the Access to Kristina rather than have her on the phone. The Access is a little machine that allows us to translate any sort of Internet connection into near-studio-quality sound. I drove to Corvallis and stayed with my dad and step-mom and then woke early Thursday morning to meet Kristina at her house. We talked there for a few minutes and then went to my dad's office a couple miles away to poach his internet connection. The show went well, and you can listen to it here.

I drove back up to Portland and immediately set to work on a segment for Friday on a bicycle building competition put on by a group called Oregon Manifest. That ended up being a remote too, so early on Friday morning I took the access down to the Pacific Northwest College of Art, where the event was taking place, and set everything up with Dave Blanchard, Think Out Loud's newest producer. 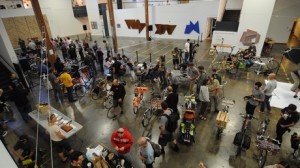 The segment on Oregon Manifest came later in the show, but Dave promoted it at the top of the hour saying something like: "Later in the show we'll go to a bike building competition in downtown Portland. Our producer Alex Johnson is there. Alex, what do you see?" I told Dave what the scene was and then he moved on. It was my first time being on air, and if you're interested, the audio is here.